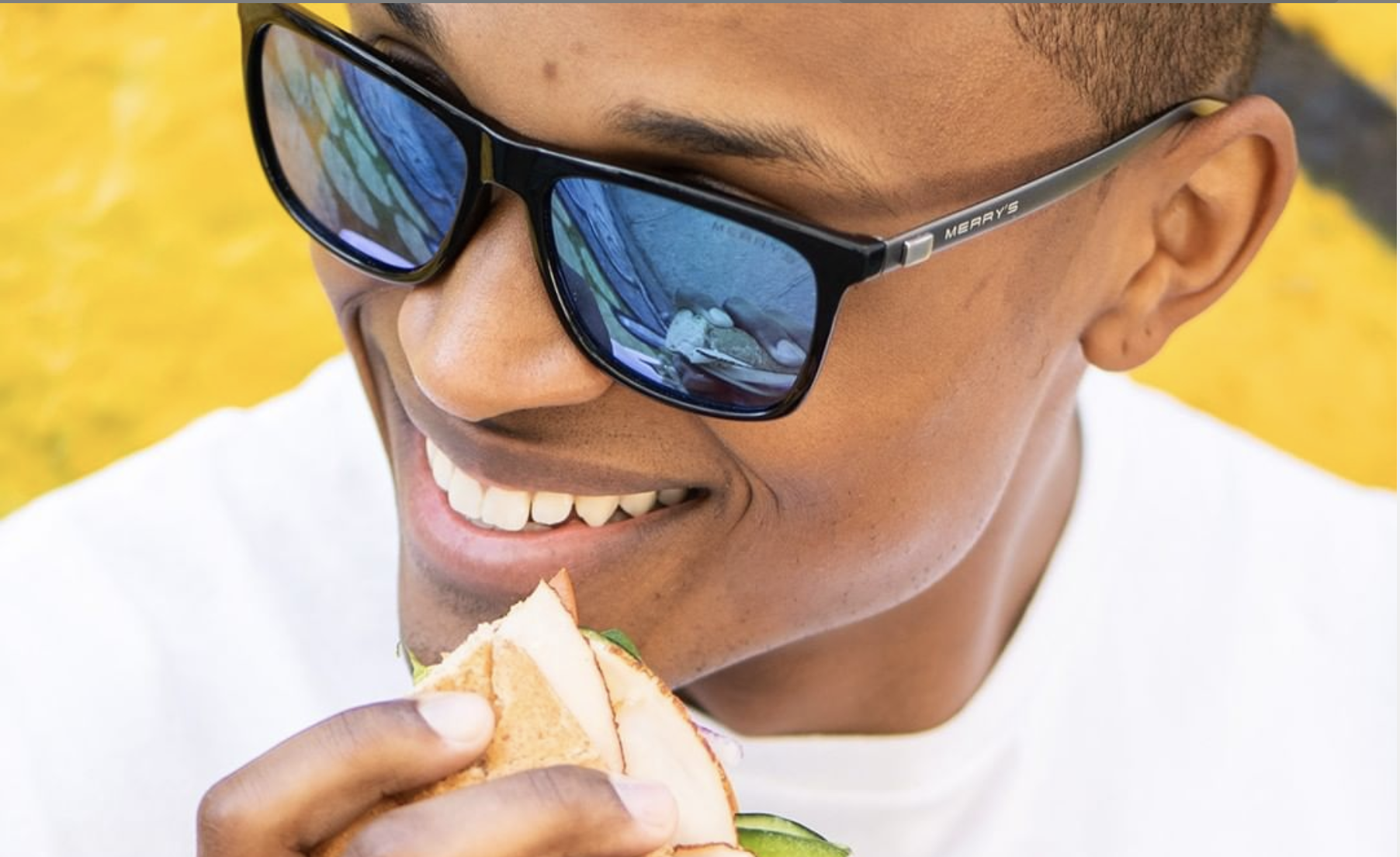 What media and social platforms are Gen Z and Millennials who eat at Taco Bell using? What about those who don’t eat there, but the brand wants to reach? The YPulse brand tracker homes in on exactly what media that brands need be on to hyper-target the young consumers they need to reach…

Once upon a time, to reach young consumers, brands had a limited number of choices, and not much confusion over where they were spending their time. But as most every brand knows, those days are long gone. Gen Z and Millennial consumers are the Post-TV generations, spending all their time away from cable, hopping from streaming platform to streaming platform, and devoting more and more time to a fragmented variety of social platforms. It can be more confusing than ever before to figure out where exactly brands should be spending their time and ad dollars to reach the young audiences they need. Our most recent media consumption monitor survey found that smartphones are now the top screen that both Gen Z and Millennials are watching content on weekly, with almost double the number of 13-36-year-olds saying they watch content on their smartphone than say watch TV. And not only are streaming services more popular than cable among these young viewers, social platforms have also now eclipsed cable as places they watch video content weekly. Both are changing the future of advertising. To reach young consumers, should a brand bet on social platforms, or invest in streaming marketing?What platforms are the best places to reach those Gen Z and Millennials who are most likely to buy from them, and where should they target those young shoppers they still need to win over? Figuring out where their eyes are has always been vital, but for brands today, it’s a more crowded and more dynamically changing landscape to figure out.

Which is why the YPulse brand tracker has introduced a new media module that not only homes in on what platforms young consumers are spending their time on, but also shows how those platforms change depending on their relationship to a brand. We measure young consumers’ relationships with over 400 brands based on a weighted six-point scale: “never heard of this brand,” “have heard of this brand,” “am familiar with this brand,” “have bought from this brand,” “am loyal to this brand,” and “this brand is one of my favorites.” Merging the data from this relationship scale and our data on the exact media (including streaming services and social platforms) that they say they’re watching weekly, we’re able to hyper-target a brand’s audience, revealing the media that, for example, a brand’s fans are spending time with, versus where those that don’t use the brand are focused. A brand with low awareness, whether a startup or a new product from a big parent brand, could look at where the Gen Z and Millennials who know about them are, but also find out where to target the young audience that has never heard of them.

Let’s take Taco Bell. What media are the Gen Z and Millennials who buy Taco Bell spending their time with, and where should the brand target those young shoppers who aren’t currently spending money with them? The media module breaks it down: 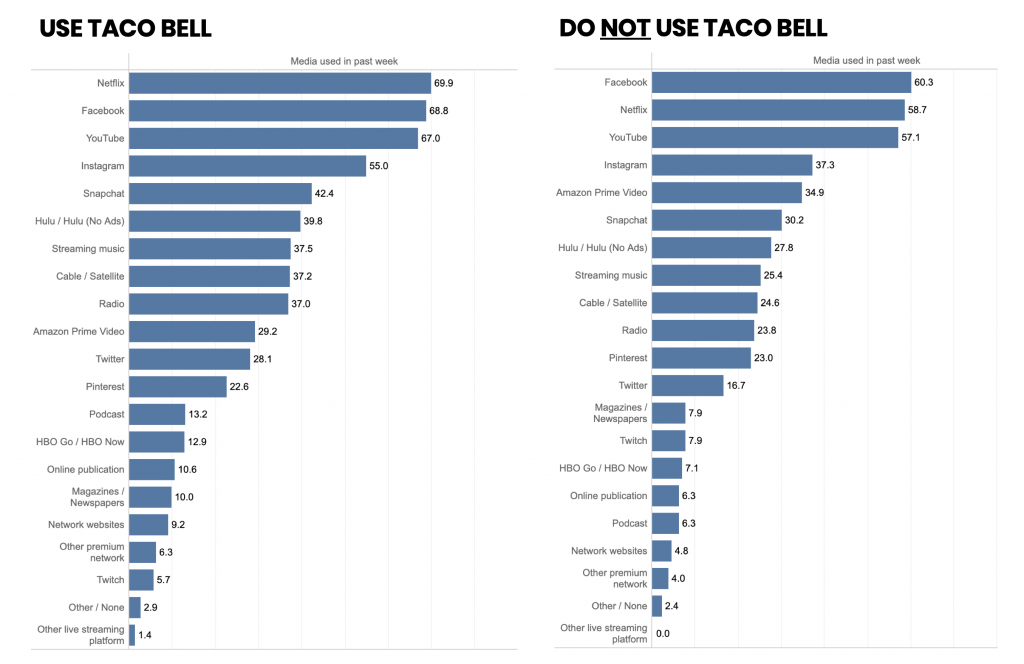 According to the brand tracker, Netflix is the top media source for 13-37-year-olds who buy from Taco Bell, while those who don’t buy from the brand are more likely to be on Facebook weekly. Overall, their brand users are more likely to be using social media and streaming platforms in general, making their non-users a little harder to reach. (And therefore making it even more vital to understand what media to target them on.) If Taco Bell wants to reach their fans, a collaboration with Netflix would be a clear win. If it’s the non-users they want to target, Facebook marketing is a better bet—and an experiential campaign might be necessary as well, as they’re less likely to be consuming media in general.

We could also look at the media that Taco Bell loyalists and non-loyalists are consuming, or those that say Taco Bell is a favorite versus those who aren’t a part of the Taco Bell Brandom. But these results are also different for every brand. To stay in the fast food lane, when we look at Subway’s users versus non-users, a different targeting plan is needed: 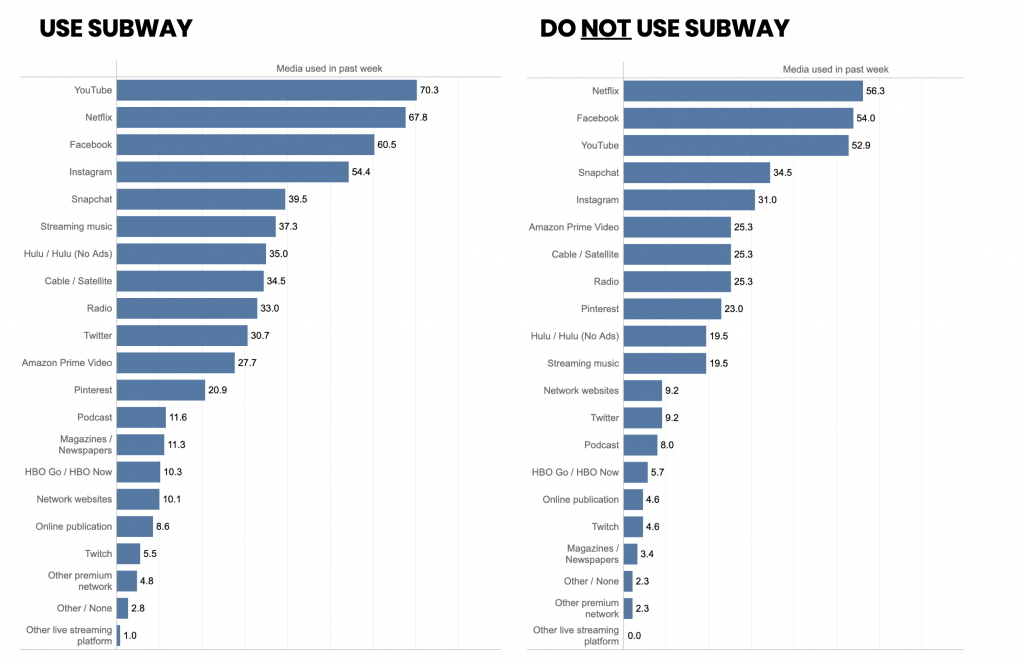 Subway users are most likely to be using YouTube every week, so if the brand wants to reach the young audience already purchasing $4 footlongs, they’re best off engaging them there. But for this brand, non-users are most likely to be on Netflix. (Cue the Stranger Things 4  Subway cameo.) And there are other variations here that the brand could use to target the audiences they want. Subway users are far more likely to have used a music streaming platform in the last week, compared to non-users. So a Spotify or Pandora campaign with a solid discount call to action could earn them repeat visitors. And while Subway non-users are again less likely to engage with media overall, Snapchat actually ranks higher as a platform used in the last week than it does among users, so a campaign on the app targeting Subway newbies could pay off.

Young consumers are spending their time on non-traditional media, but knowing exactly which they’re focused on could be the difference between winning them over and missing them completely.