Is there life in the 2019 box office after Avengers? We asked Gen Z and Millennials the summer movies they’re excited to see to find out…

There’s little doubt that the movie of the year is already Avengers: Endgame. Pre-order tickets for the massive hit’s highly-hyped premiere shut down theater websites, and AMC Theatres even showed the flick for 72 straight hours the premiere weekend to accommodate the Next Level Fandom. Now, Endgame has officially eclipsed Avatar’s domestic box office earnings, putting it in rare company. But with one of the biggest movie success stories already in theaters, what does that mean for the rest of 2019? The summer movie season is about to begin, and its success could depend on Gen Z and Millennial consumers showing up in droves.

Before Avengers busted through the galaxy breaking records, the 2019 box office was off to a rocky start, with a six-year record-low revenue. According to the Hollywood Reporter, besides Us and Captain Marvel, many of the film industry’s big-budget bets turned out to be misses, signaling a 17% downturn compared to the same time in 2018—which, by the way, wasn’t a great time for movies either. Last year, the summer season was responsible for a major movie earnings turnaround, and once again the industry may be relying on it. Luckily, Comscore predicts this “monumental slate” could bring about “the greatest comeback in box office history.” The box office is hanging its hopes on highly-hyped debuts like The Lion King to reel in young theater-goers, but will they buy tickets?

According to our recent survey on Gen Z & Millennials’ summer plans, 15% of 13-36-year-olds say going to the movies is what they are MOST excited to do this summer—but we also asked them to tell us what summer movies they’re actually excited to see. When we looked to the data, it turns out that there’s a slight, and perhaps unexpected, generation gap on which title will win out: 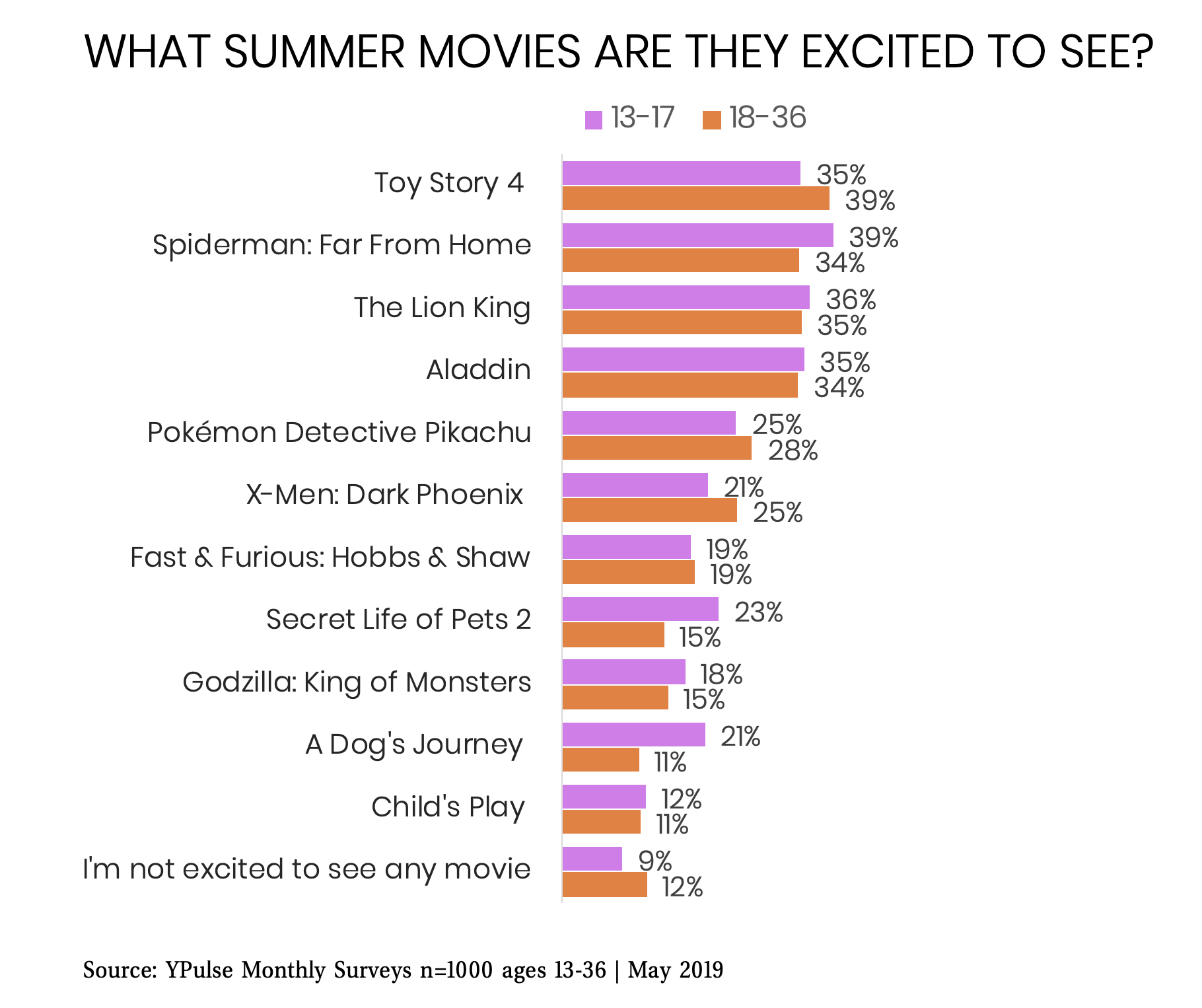 It’s a close race. Toy Story 4 and Spiderman: Far from Home are at the top of the list, but the latter wins first place with Gen Z teens, while Millennials are slightly more excited about the return of Woody and Buzz. That said, it’s a fair bet that both will do well with young consumers, who are clearly still ready to show up for sequels to revisit the characters they love. Millennials grew up with the Toy Story gang, so while it might be a bit of a surprise that the younger set isn’t more excited for that film, nostalgia wins here.

But the real winner overall is clearly Disney, with four of the five top titles on the ranking belonging to the House of Mouse. Of course, owning a massive portion of the entertainment world, including Marvel and Pixar, helps them out tremendously. And it looks like their live action movies could continue to serve them well, especially for female young consumers: 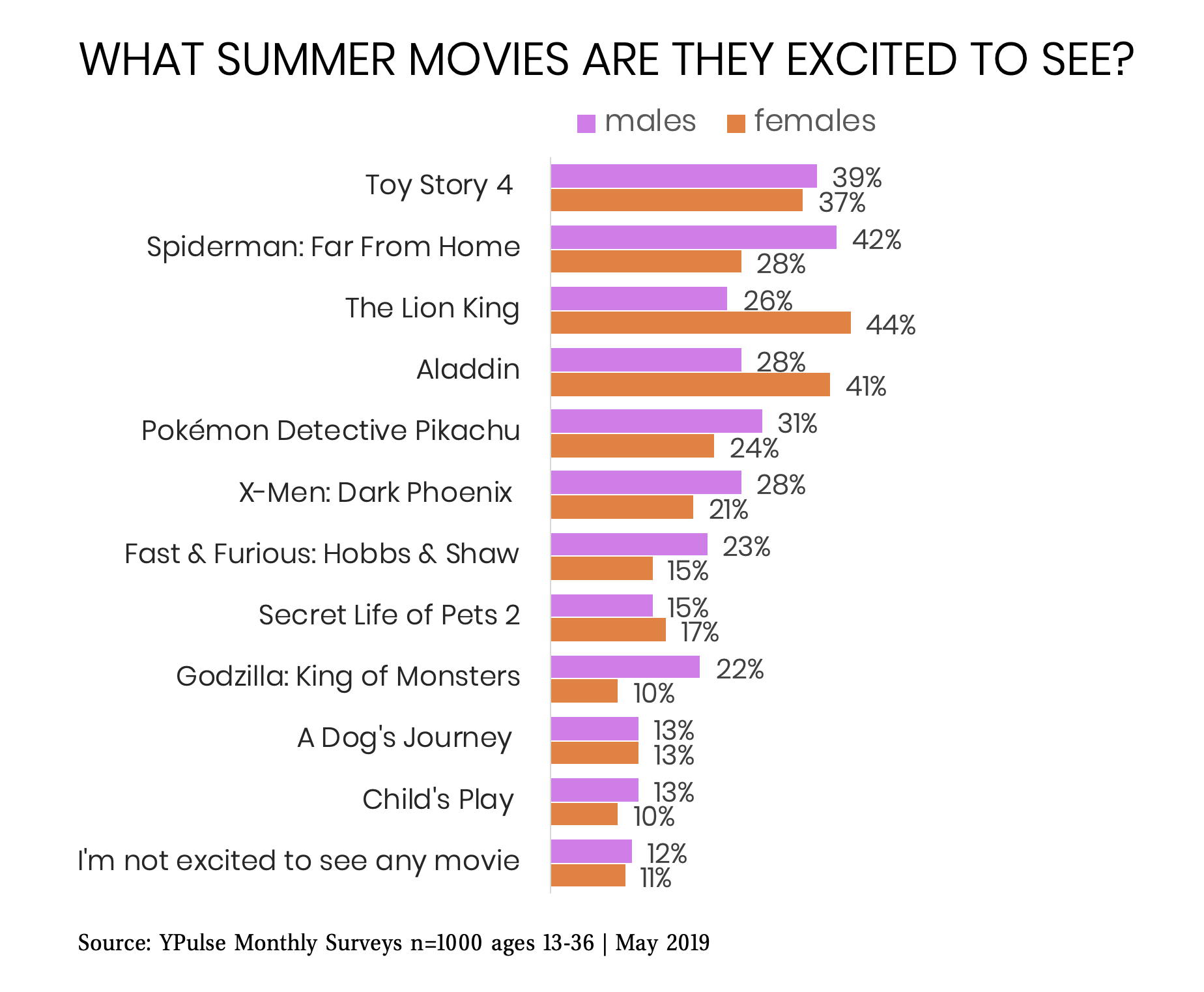 The Lion King is actually the top movie that young females are excited to see, followed by Aladdin. Meanwhile, males are more likely than females to say they’re excited for Spiderman, Fast & Furious, and the new Godzilla. With the excitement around both Disney live action and Marvel stories still alive for young consumers, we can expect that Disney will stick to their plans to release as many of them in the coming years as possible.