Netflix Inspired A Lot of Memes on The Viral List

Netflix kicked off 2019 with a lot of memes inspired by its original content, McDonald’s and Beyoncé had vegan messages this week, a wholesome Chinese meme is trending, and more links to catch you up on the viral list… 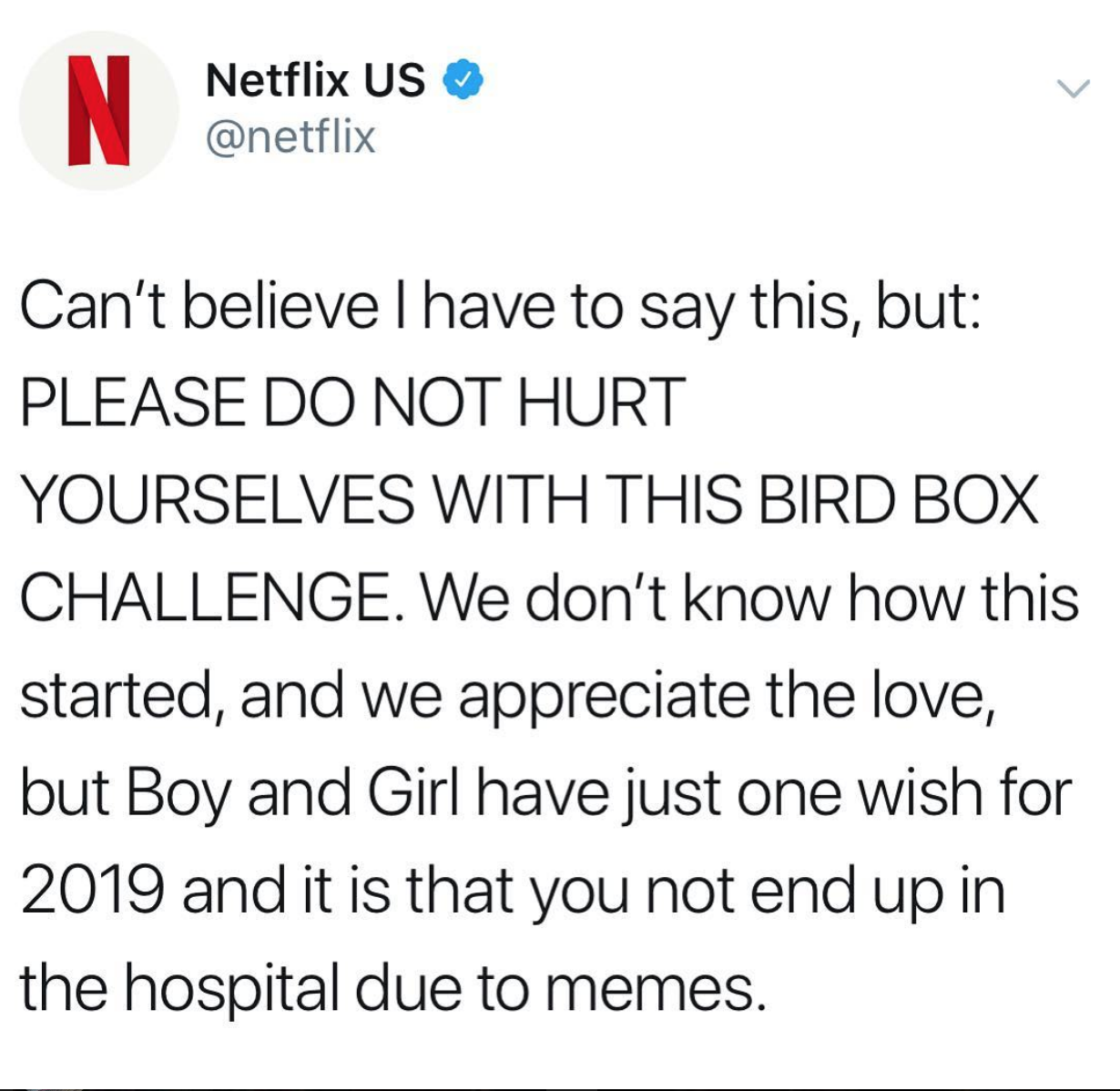 1. Netflix Warns Everyone Not To Do The #BirdBoxChallenge

Netflix’s new movie Bird Box is a huge hit. The film accrued over 45 million views in its first seven days, the most ever for a movie debuted on the streaming platform—and a lot more eyes than they could get with a traditional box office release. It’s also inspired a lot of memes, including one that Netflix has warned fans not to participate in. The #BirdBoxChallenge has people blindfolding themselves to do every day activities—YouTuber Morgan Adams sported a blindfold for the challenge for a full 24-hours, fueling the trend’s popularity. (Her challenge video has over 2.5 million views.) But Netflix took to social media with the warning: “Can’t believe I have to say this, but: PLEASE DO NOT HURT YOURSELVES WITH THIS BIRD BOX CHALLENGE.” 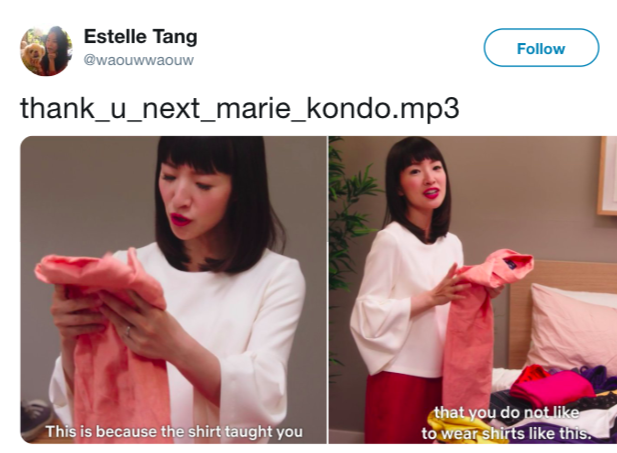 But that wasn’t Netflix’s only viral moment this week! The platform’s new series Tidying Up With Marie Kondo was released on New Year’s Day, and has apparently inspired viewers to start the year with a good clean up—or at least social media messages talking about cleaning up. Kondo first gained fame in 2016 with her book The Life-Changing Magic of Tidying Up (which we talked about in our Less is More trend). Now, her Netflix series has her visiting regular Americans and teaching them to organize and get rid of their belongings, and this week, Twitter was full of posts about the show, with fans showing off their own Kondo-inspired efforts and memes in her honor.

3. McDonald’s and Beyoncé Started The Year With Vegan Messages

Two brands got together to banter about vegetarian menu options to the delight of social media. After Piers Morgan tweeted out some anti-vegan snark directed at UK chain Greggs new vegan sausage roll, the brand was quick to quip back. But Morgan also aimed at McDonald’s new vegetarian Happy Meal, eliciting the response, “Like our pals at the sausage roll place, we’ve been expecting you. Don’t worry Piers, you can still get McNuggets in your Happy Meal!” Their tweet has over 17,000 likes—and is a great example of brands becoming allies on social media. Oh, and Beyoncé also had a vegan message this week, challenging fans to embrace a vegan lifestyle in a new book intro.

Wholesome (and global) content continues to go viral, and this week is no exception, with the Four Generations meme coming out of China and spreading joy around the world. The simple meme has four generations of family members participating in videos (many shared on popular app TikTok) where they enter the room and call the next generation member in sequence from youngest to oldest. The delightful clips are earning hundreds of thousands of views online, and at least one nomination as “cutest meme of 2019.”

Chrissy Teigen started 2019 with a meme-able moment, movie clichés are trending in a new Twitter meme, and everyone is talking about the iPhone’s potential fall from grace…