Burger King Burns McDonald’s And Kanye On The Viral List

1. Burger King’s Kanye Burn Gets Over One Million Likes

Fast food restaurants have established themselves as some of the sassiest social media accounts on the internet, and friendly rivalries between the chains vying for young consumers’ dining dollars are frequent. Considering McDonald’s is one of Gen Z’s and Millennials’ favorite fast food establishments, it’s no wonder the restaurant is often targeted in these marketing moves. (Remember Burger King’s Halloween campaign?) This week, Fast Company reports that @BurgerKingUK burned McDonald’s and Kanye West in one fell swoop when they retweeted @kanyewest’s tweet, “McDonald’s is my favorite restaurant,” adding some cutting commentary of their own: “Explains a lot.” The tweet has over one million likes, and a follow-up from @BurgerKingUK that says, “If we knew this was going to blow up we would have made a soundcloud..” has also accrued over 112,000 likes.

While Burger King was mean to others to boost their brand, KFC turned the shade on itself in a surprising marketing move. The chain restaurant started promoting the most popular tweets roasting their French fries, like this one from @upgrade_music, “Dear KFC / No one likes your fries. / Yours sincerely, / The entire world.” that garnered 15,000 likes this February and this one from @AdumOnline in 2016, “how can KFC be so good at chicken and so bad at fries?” that has over 8,000 likes. The Twittersphere took notice; even @BurgerKingUK jumped in with a relevant meme, retweeting them and adding, “Weird Flex but ok.” But as it turns out, it was all part of a grand master marketing plan to kick off their new campaign, Ain’t No Small Fry, which Adweek reports is teasing the rollout of a new French fry recipe that consumers will (hopefully) want to eat, not roast.

Ariana Grande just dropped a new hit about her famous exes called “Thank U, Next,” and it’s being meme-ified. One line in the song, “One taught me love, one taught me patience, and one taught me pain,” has sparked a flurry of memes in which people apply the line to anything that comes in threes, like famous love triangles, poorly-executed movie trilogies, and any iconic three-member group. For example, @jaboukie’s collage of Ed, Edd n Eddy from the ‘90s cartoon has over 24,000 likes, and @ayoedebiri’s nod to Shrek’s diminishing returns across three movies has over 35,000 likes. Another meme almost took off earlier this week, too, when Apple Music misspelled “Ari” as “Aubrey” and the internet had a mini field day—until Ariana Grande herself stepped in to clear up the confusion. 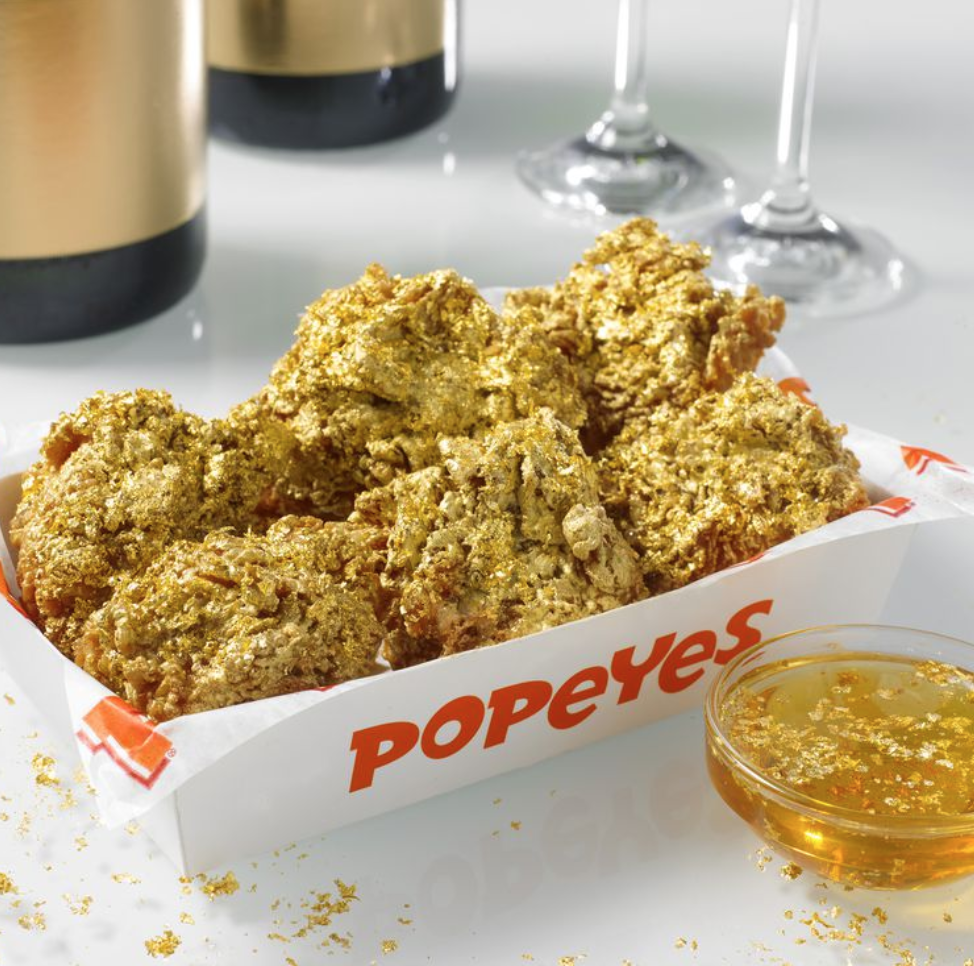 Opulent eats began to fill our feeds with glitter lattes, but then the Instagrammable trend progressed to decidedly un-sparkly fare, like beer, pizza, bagels, and even gravy, reports Voraciously. Brands took notice and began gilding their most low-brow fare for some fun marketing moments, like Gold Kit Kat bars in Japan. The latest was from Popeye’s, who created high-end chicken wings that were dipped in champagne and covered in 24 karat gold. One menu consultant tells Eater, “There’s no ambiguity, it seems to me, about what’s on offer with gold-plated burgers, wings and more. Operators are going for the Instagram gold as a means to build buzz and generate traffic.” Her prediction for the next trend will be a backlash to made-for-Instagram food in the form of “ugly delicious” eats.

Selena Gomez has been dethroned as the most popular person on Instagram, ‘tis not the season without a Starbucks holiday cup controversy, and a birthday party thrown on a subway car is angering cranky New Yorkers.