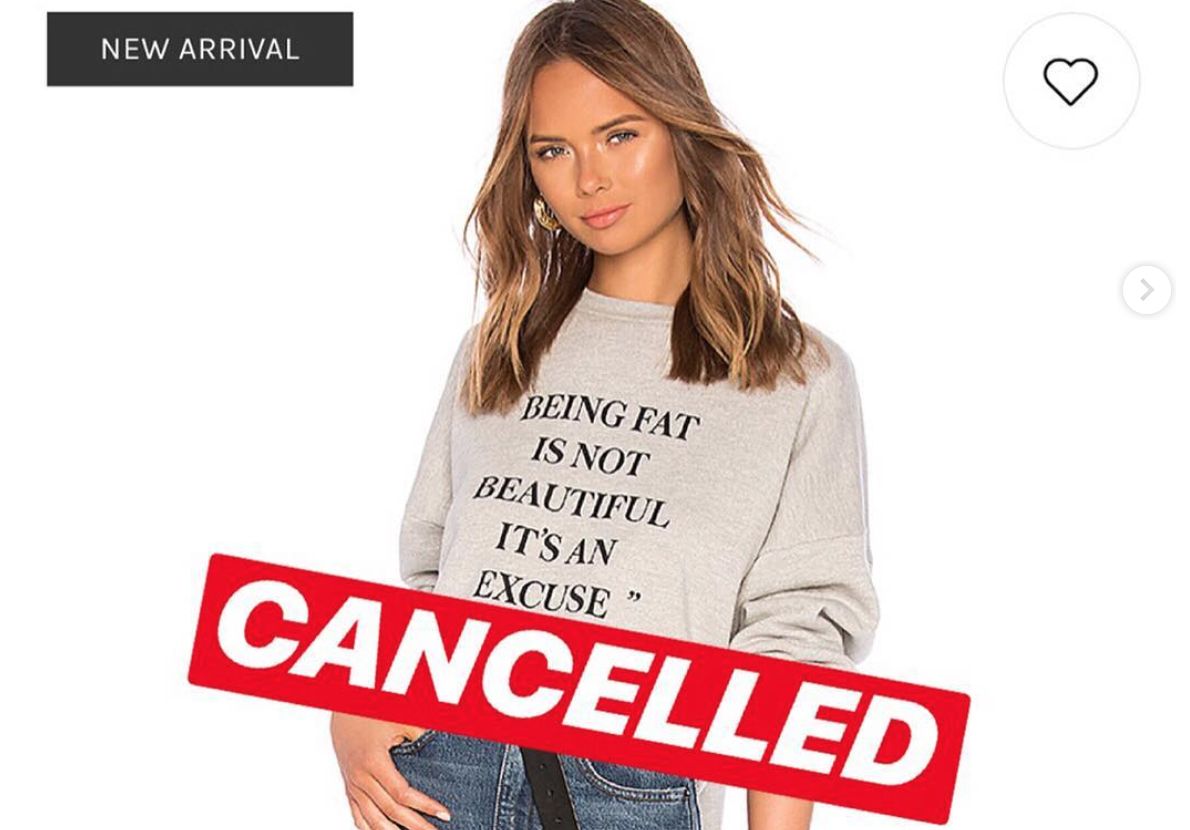 A Sweatshirt Fail Has This Millennial Brand Under Fire

A new sweatshirt is anything but body positive, Shay Mitchell’s sponcon is being called out as fake, Cardi B is making money moves with new, blue lipstick, and more stories that riled up the web this week…

1. Revolve Offended the Internet With A New Sweatshirt

Another day, another brand ban. Mic reports that Revolve made a serious marketing misstep this week, posting a sweatshirt that read “BEING FAT IS NOT BEAUTIFUL IT’S AN EXCUSE.” And to top it off, the model wearing the garment wasn’t anywhere near plus-sized. Backlash was swift. Revolve quickly took the post down, according to Cosmopolitan, and then posted their apology on Instagram, explaining that the design was part of the LPA x Lena collection, showcasing real quotes as told to women who rose above them. LPA posted another lengthy statement, saying the collaboration had “gone terribly wrong,” while Lena Dunham explained the intent of the project in one post and in another, thanked fans for the dialogue they sparked concerning the sweatshirt fail. Hopefully, that dialogue leads to fewer Body Positive blunders in the future.

2. Shay Mitchell Is In The Hot Seat For Fake Sponcon

Shay Mitchell is being called out for a pretty unconvincing piece of sponcon for Biore. In the offending video, Mitchell pretends to remove her makeup while talking up the brand, but as twitter user @ohjilzzle pointed out, “SHE AINT EVEN ACTUALLY RUB HER EYE IM CRYING LMFAOOOO.” That tweet has racked up over 210K likes and 75,1K comments. Most are getting a good laugh from the video, but some just think it’s cringe-worthy, and others are blaming Biore. According to Buzzfeed News, @AshleeMayorga wrote, “So @bioreus, you’re just going to allow @shaymitch to “promote” your products like this? This is embarrassingly bad. Especially given the climate of the beauty community at the moment. She didn’t even use the product. Anything for $$ I guess.” Still others, like @Sarah_Bednar, are turning it into a meme by recreating the moment and making their own purposefully bad “ads.”

Hot on the (high) heels of her NYFW feud with Nicki Minaj, Cardi B is making “money moves” by teaming up with Tom Ford. The luxury brand has been rolling out lipsticks named after stars like Armie Hammer and Gal Gadot, and now Cardi B has gotten her own—and it’s a vibrant blue hue. While some are wondering why the rapper would get blue instead red because of her known gang affiliation with the Bloods (whose color is red and rival gang’s color is blue), Cardi B doesn’t seem to care. She posted an Instagram celebrating the fact that the new makeup sold out within hours of its release—and captioned an earlier ‘gram “Excited for this and what’s to come,” which Nylon thinks could hint a larger line of makeup in the works.

4. The Chilling Adventures of Sabrina is Getting Tons of Hype

Everyone knew the sinister spinoff of Sabrina the Teenage Witch was going to be dark, but the trailer for The Chilling Adventures of Sabrina still has the internet shook. It already has over 1,200,000 views on YouTube and is one of the top trending videos. In the video, Salem the cat is replaced at the family dinner table by a straight-up satanic minotaur as Sabrina blows out the candles on her sixteenth birthday cake, setting the tone for a show that Vice is calling, “freaky as hell.” In our Escape to the Dark Side trend, we found that 89% of 13-35-year-olds have watched dark content, so this Netflix series can bet both on young viewers’ love of horror and their penchant for nostalgia entertainment. (It doesn’t hurt that the series shares producers with and is from the same fictional world as the teen hit, Riverdale.) But for anyone who’s waxing nostalgic for the original, just remember, as one YouTuber commented, this is “not the sabrina the teenage witch you saw as kids folks﻿.”

Modern Family is killing off a major character next season, Serena Williams’ doll granddaughter probably has more Instagram followers than you, a school is changing their dress code after suspending a boy for wearing makeup, a new Spongebob meme sums up the internet’s nihilism, and Kendall Jenner is rising above cyber-bullying by resurfacing an emotional video.