The Return of Logomania, In One Chart

Logos are back, and young consumers are snapping up branded products like it’s the ‘90s again…

Last week, a Supreme branded New York Post sold out. The cult streetwear brand teamed up with the Post to promote their latest look book drop, taking over the newspaper with their iconic red logo—printed just once on each side. Hypebeasts everywhere had a heyday, with any who were lucky enough to be New York-based buying out copies at their local bodegas. Like other Supreme merch, the papers were then upsold on eBay for ten times the original retail price. Supreme’s logo is so popular that their fans will buy bricks and metrocards just to have a lasting piece of the brand. It’s an extreme case, but it’s just another sign that logos are back in a big way.

Ypulse predicted that logomania was on the rise as more young consumers want to show off their brand tribes on social media, IRL. In the wake of the recession logos became passé, as conspicuous consumption was no longer a possibility for the majority of young consumers. The heydey of sporting those Juicy tracksuits and Tiffany bracelets faded in favor of minimalism and even a preference for brandless design. But that anti-logo mentality is fading.

There’s growing evidence that young consumers love to show off certain logos, and we’ve seen it in our surveys. Ypulse wrote about the return of logos and the trend of brand tribes in our Brandoms report earlier this year. We’ve also been tracking young consumers’ feelings about logos over time, asking Gen Z and Millennials if they like to wear clothing with logos on them since 2016. And this one chart tells the story:

We’ve seen a steady increase in young consumers’ interest in clothing with logos on them since 2016, and today, two in five 13-36-year-olds tell us they like to wear logo-emblazoned clothes.

But don’t start thinking that it’s the same logo-obsession the kids of the ‘90s had—this time, many of those wearing logos are thinking more about inclusion in a community/fandom and less about showing off. Yes, luxury brands like Gucci (a young consumer favorite) and Louis Vuitton added an excess of logos to their Spring/Summer 2018 collections. Fendi released a capsule collection this spring covered in their classic FF, which was heralded as a logo comeback. But this time around, logomania isn’t just about exclusivity. Young consumers are repping everything from their favorite streetwear brands to their go-to fast food restaurants. Companies are answering their call with unlikely fashion and product collaborations (ahem, Dunkin’ Donuts running shoes). Big brands and niche brands alike are part of the rising trend as social media levels the playing field for building an avid fan base.

We should note that one group in particular is especially enthusiastic about logos. And though we said we only had one chart to show, give you one more: 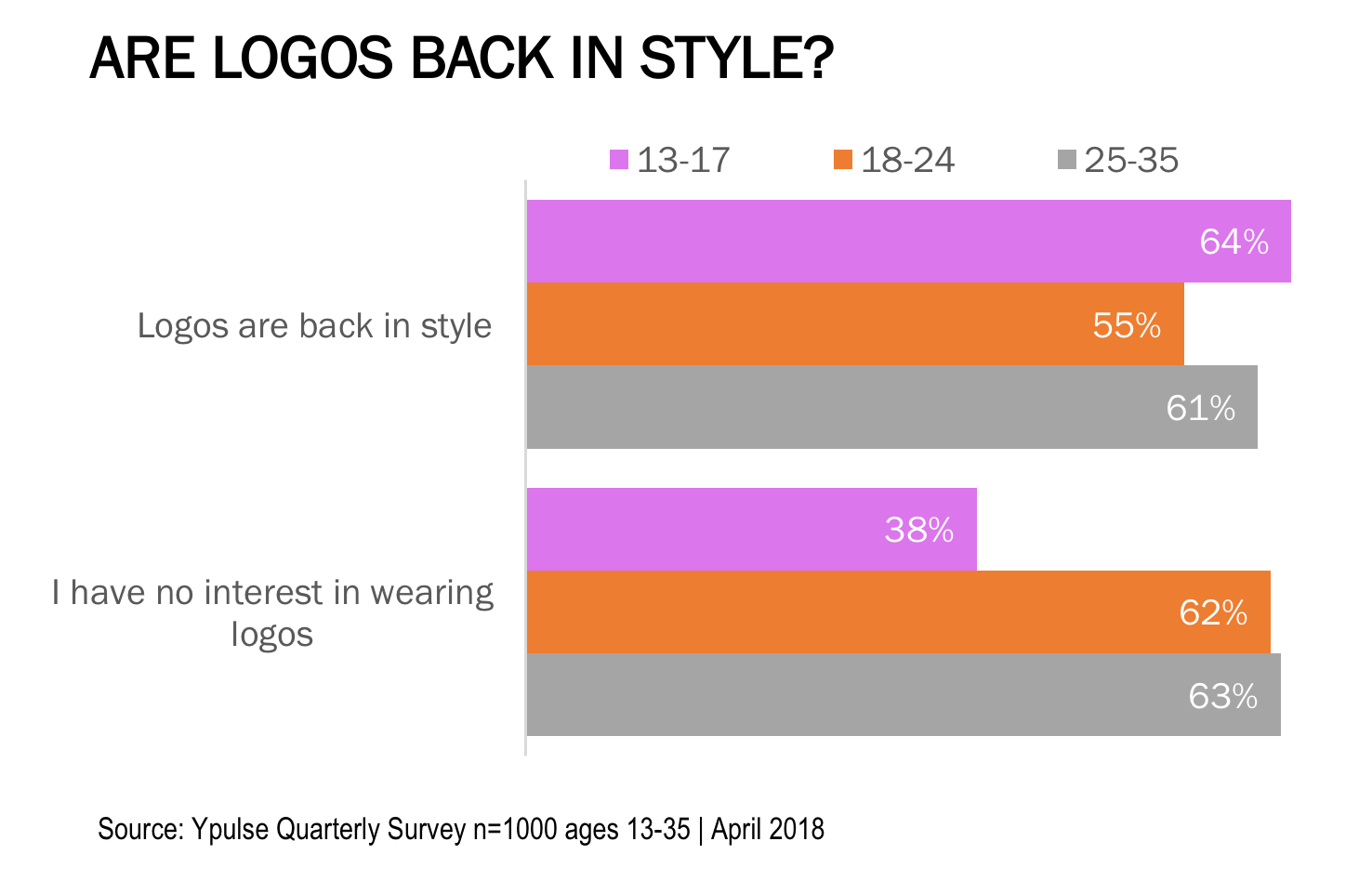 Though the majority of all age groups agree that logos are back in style, 13-17-year-olds are especially interested in wearing logos. They’re also more likely than older groups to say they have purchased something that prominently dispays a brand logos, and that they like to wear clothing with logos on them. Perhaps because older Millennials lived through the logo-obsessed ’90s, they’re a little less open to the trend. But to Gen Z teens, this is all new, and they’re happy to sport brand logos—if it’s done the right way.

Gold subscribers can read more about the return of logomania in the Brandoms trend report, here!

North America
Gen Z & Millennials Aren’t Turning to Experts for Wellness Information
Wellness professionals aren’t at the top of their list for wellness information any...
Western Europe
Online or In-Store? Here’s How Young Europeans Are Shopping Now
After two years of virtual shopping, IRL retail is making a comeback. So how do you...
North America
3 Kinds of Brand Experiences Young People Are Having in The Metaverse
Brand experiences in the Metaverse are continuing to evolve… TL;DR The ...