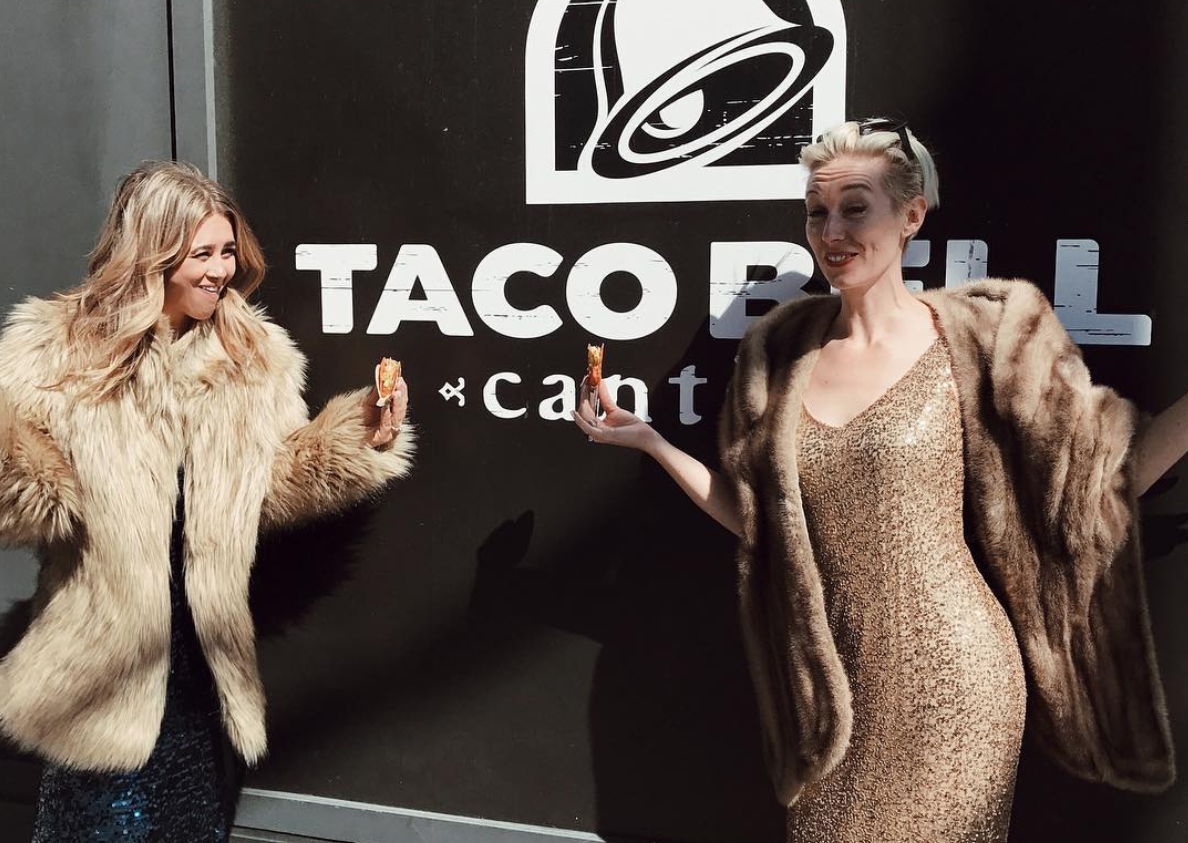 Appearance is everything for the Instagrammability-seeking generations, and we’re seeing young consumers redefine luxury to no longer just mean being expensive. (A free tote bag from the New Yorker could earn its wearer more clout than a high-end label.) Because their definition of luxury is blurred, these young consumers don’t mind seeing high-end offerings from traditionally un-luxe brands. The actual brand name doesn’t matter as much as what they’re providing. Lower priced brands teaming up with high-end names has turned into a common tactic as they’ve aged up, and conditioned young consumers to believe that they can find luxury products in less-than-luxury surroundings. Target’s continuous designer partnerships are now industry standard—as just one example, recently Pottery Barn Kids teamed up with the heiress of Missoni for a designer kids’ home décor collection. But now some accessible brands are also creating their own higher-end spaces to upend brand perception, and level-up their in-person offerings.

Often, this low-end-gone-luxe approach is also helping brands to provide a new, elevated experience for young consumers—vital in the days when Experiencification is ruling the retail landscape. When you need to compete with online shopping and entertainment, you have to up your game. And using high-end experiences to lure in young consumer makes sense, as they’re well known for spending on experience even when they’re not willing to spend on physical products. Here are four unlikely places we’ve started to see implementing strategic luxury makeovers to pull them in: 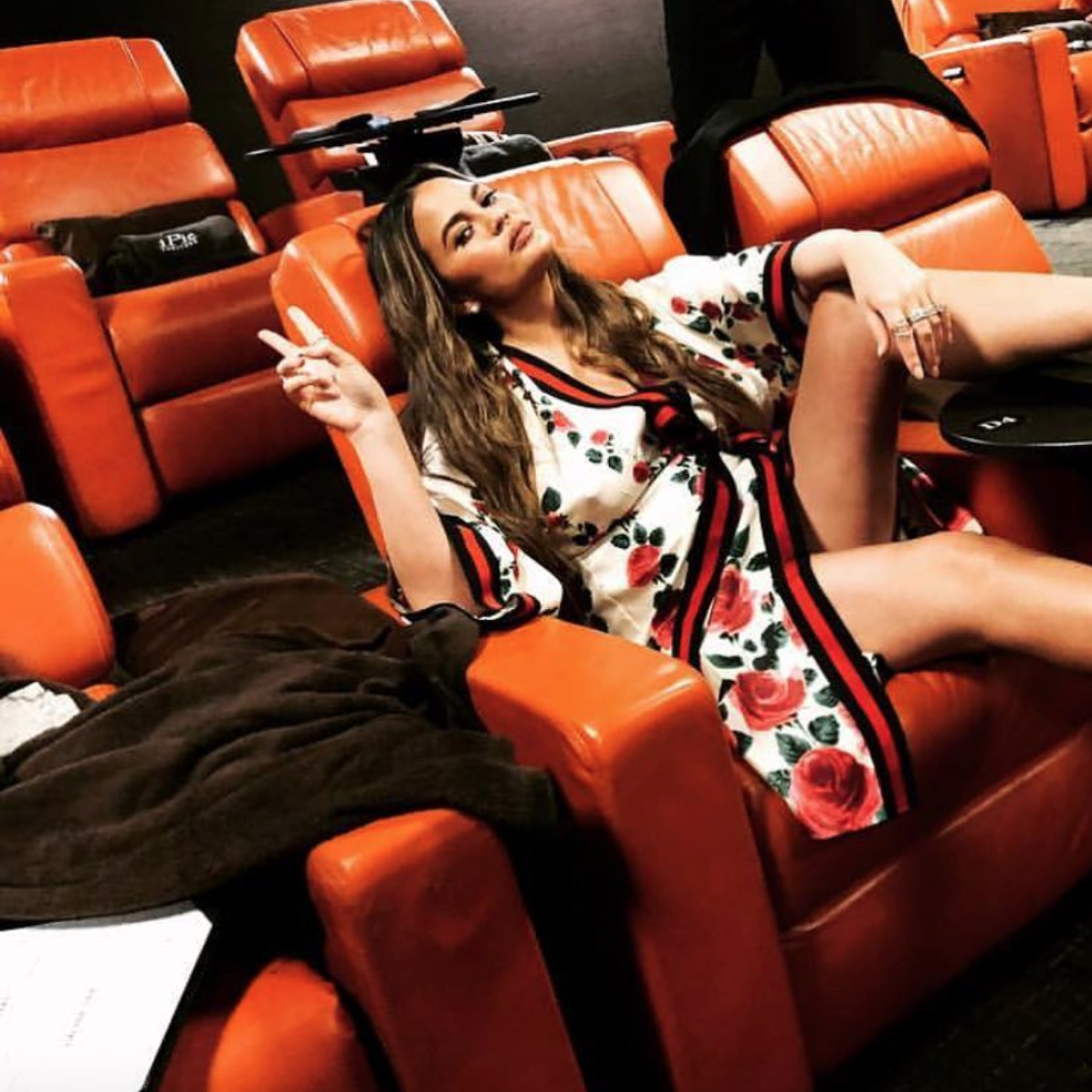 Movie theaters want to bring young consumers back to the box office, and they’re betting that luxury makeovers are their golden ticket. The Wall Street Journal reports that “hundreds of millions of dollars” are being dedicated by the three largest movie chains (AMC Entertainment Holdings Inc., Regal Entertainment Group, and Cinemark Holdings Inc.) to improve their locations. AMC installed reclining seats in 247 of its 640 cinemas last year, after finding that ticket sales increased at locations with pricier seats, while Regal added upscale menu items like Stella Artois beer to their concessions stands to bring in revenue. Smaller-scale theaters are getting in on the trend, too. Studio Movie Grill is taking up closed Toys ‘R’ Us stores and other dead retail space and retrofitting them as upscale theaters, complete with dining service from the theatre seats and a bar. One chain, iPic, is even having success charging upwards of $30 for over-the-top movie experiences that offer members Q&As with cast members, food tastings, and more. All of these changes are turning the movies into a more of an experience—which appeals to young consumers. 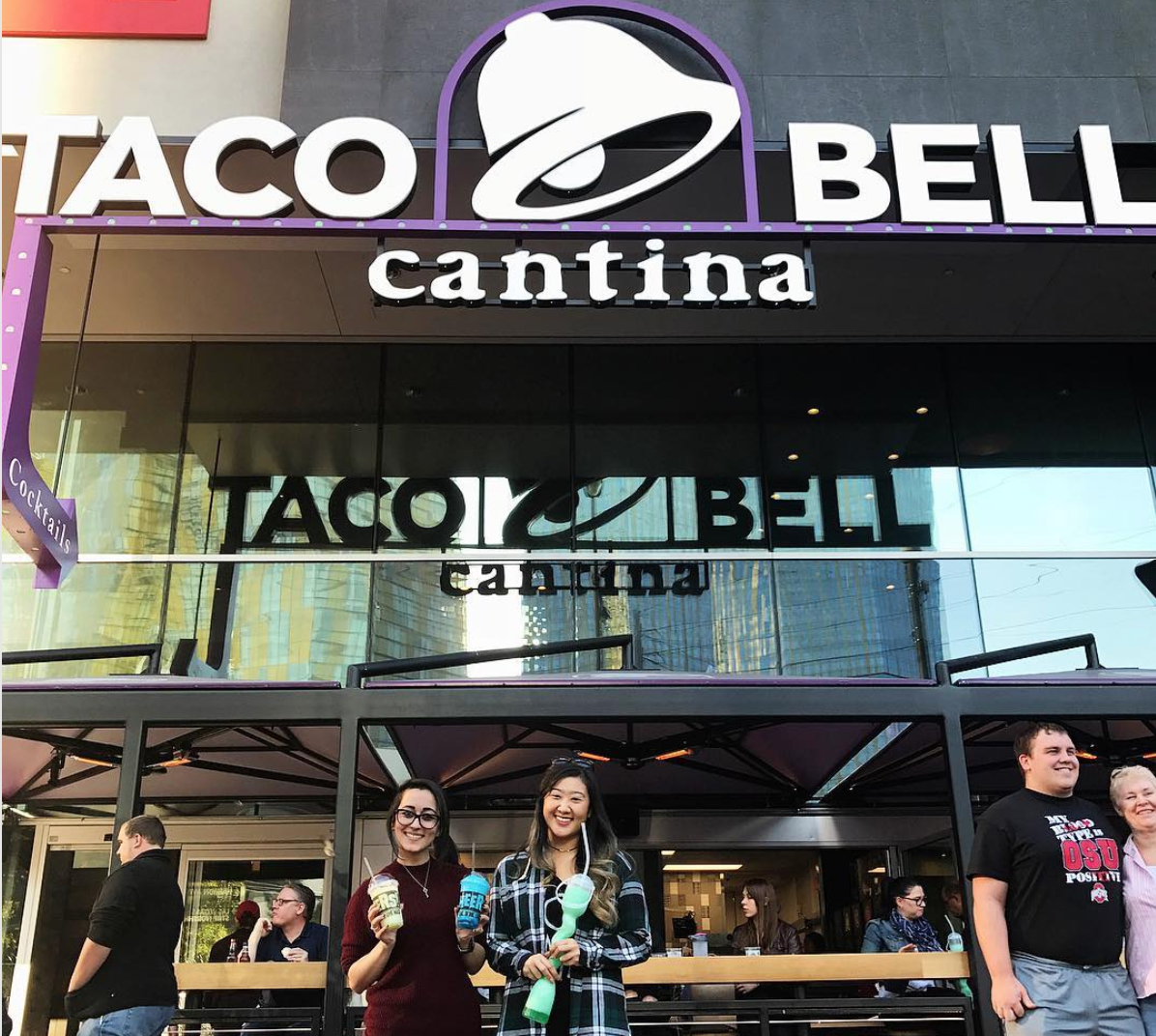 Fast food brands are upgrading their restaurants. New Taco Bell Cantinas offer alcohol and traditional fast food fare side-by-side in a modern format to “make the argument that going out for dinner and drinks with friends can happen at a Taco Bell.” In addition to making fast food dining more of an experience, restaurants are going high-tech—adding on-demand pickup, ordering kiosks, and more. Curbed reports that this redesign trend is becoming a standard across the industry, as everyone from KFC to McDonald’s gives their franchises a face lift. Even Domino’s, known for their small locations geared towards pick-up and delivery, has ventured into fine(r) dining with an upscale Brisbane location that offers alcohol alongside “gourmet pizza.” And it looks like there may be a future in the franchise offshoot; Domino’s CEO said, “We are keen to roll out further new stores based on this concept in select high foot traffic locations in the not too distant future.” 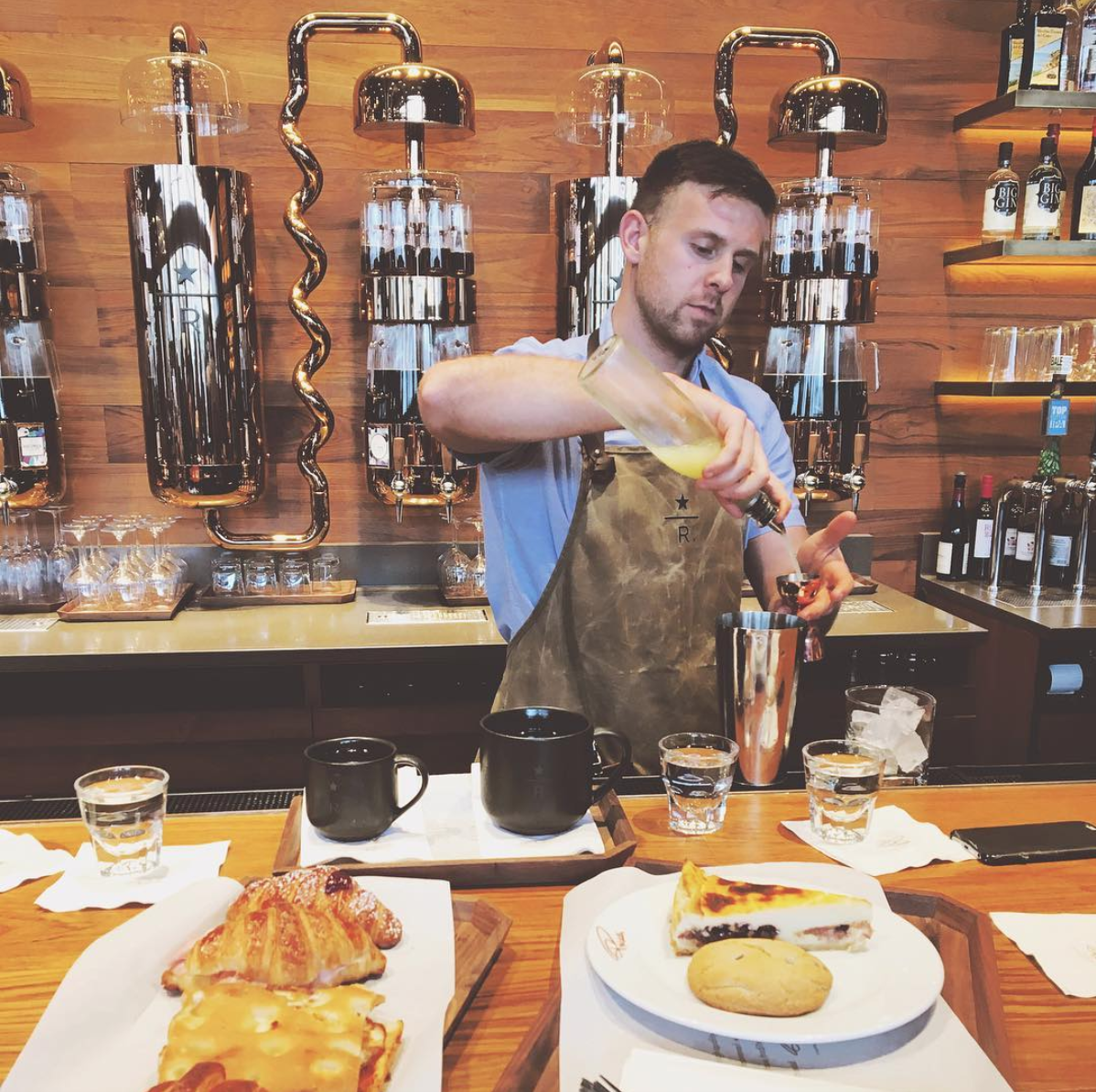 Starbucks has expanded into the luxury market with a new kind of store that sells $10 cups of coffee, craft cocktails, and high-end pizza and pastry. The pricey brews at Starbucks Reserve stores and bars target affluent consumers, but also Millennials, whose likelihood of buying gourmet coffee has grown significantly in recent years. Business Insider reported on Starbucks’s ambitious plan for opening these luxury locations back in 2016, and since then we’ve seen the idea take off.  Reserve bars have popped up across the country, while the first full-blown Reserve store (complete with a liquor-stocked bar, a Princi bakery, lounge areas, and even fireplaces) opened earlier this year—the first of 1,000 they have planned. No other industry player may be going quite so far as Starbucks, but even Folgers and Dunkin’ Donuts are betting on gourmet coffee. Folgers announced a high-end brew that they’re selling for twice the price, while Dunkin’ Donuts has added an Americano to their menu—a small first step towards “court[ing] more discerning coffee drinkers.” 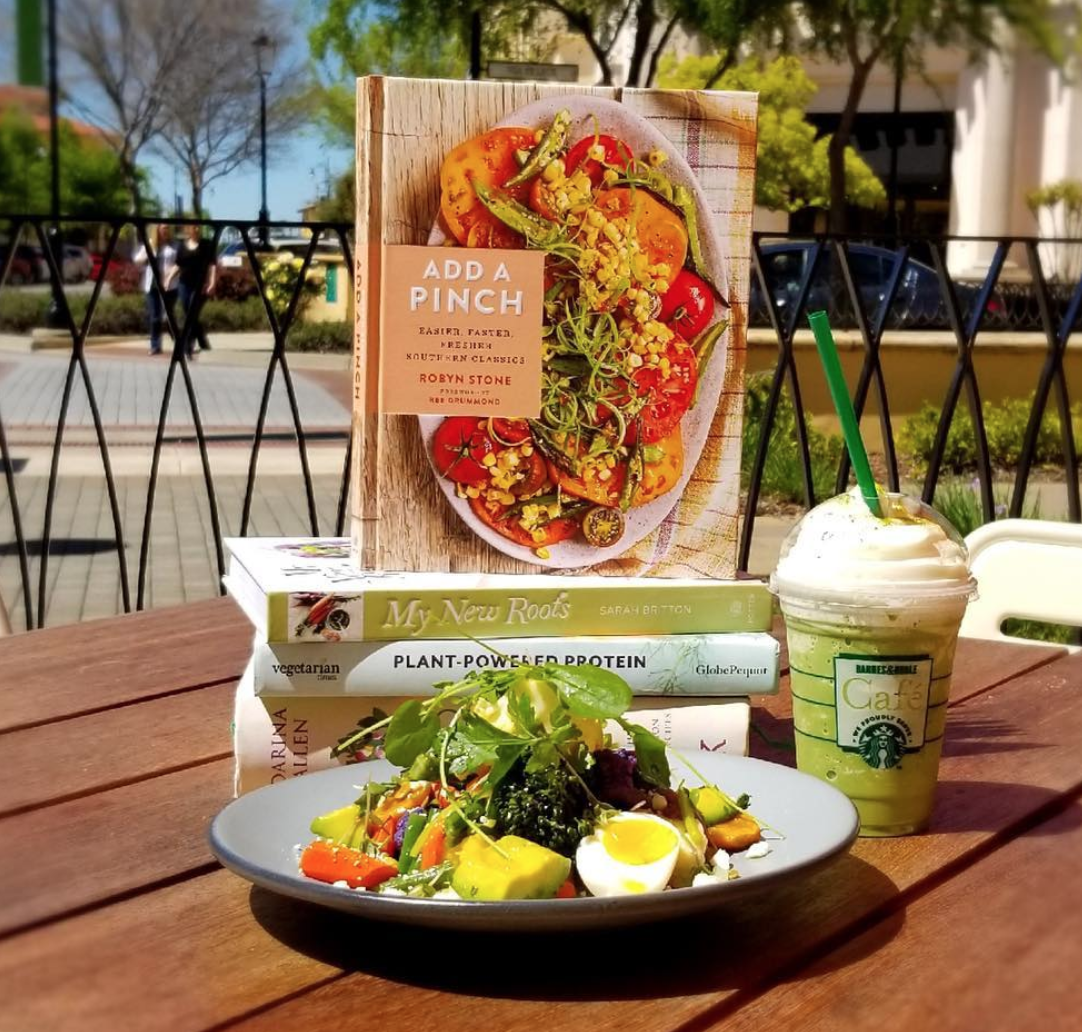 Reading may be one of Millennials’ and Gen Z’s top offline passions, but book stores are still struggling. NPD BookScan found that sales of print books rose 1.9% in 2017; however, Barnes & Noble’s woes are weighing heavily on the industry, according to the Wall Street Journal. The bookstore’s plan for bouncing back includes opening new, revamped locations because their chairman maintains that bookstores are “the showrooms for the publishing industry” and that in-person browsing can’t be replaced by online ordering. Eater reports that the bookstore chain has opened five Barnes & Noble locations with surprisingly pricey in-store restaurants, featuring menu items like $26 short ribs, charcuterie boards, and (of course) avocado toast. They’re hoping the experiential appeal to young consumers will ward off mounting pressure from Amazon and indie bookstores. But Amazon isn’t bowing out of the competition for in-person shoppers; the Los Angeles Times reports that they’re planning to cut the ribbon on three more of their tech-forward bookstores soon.