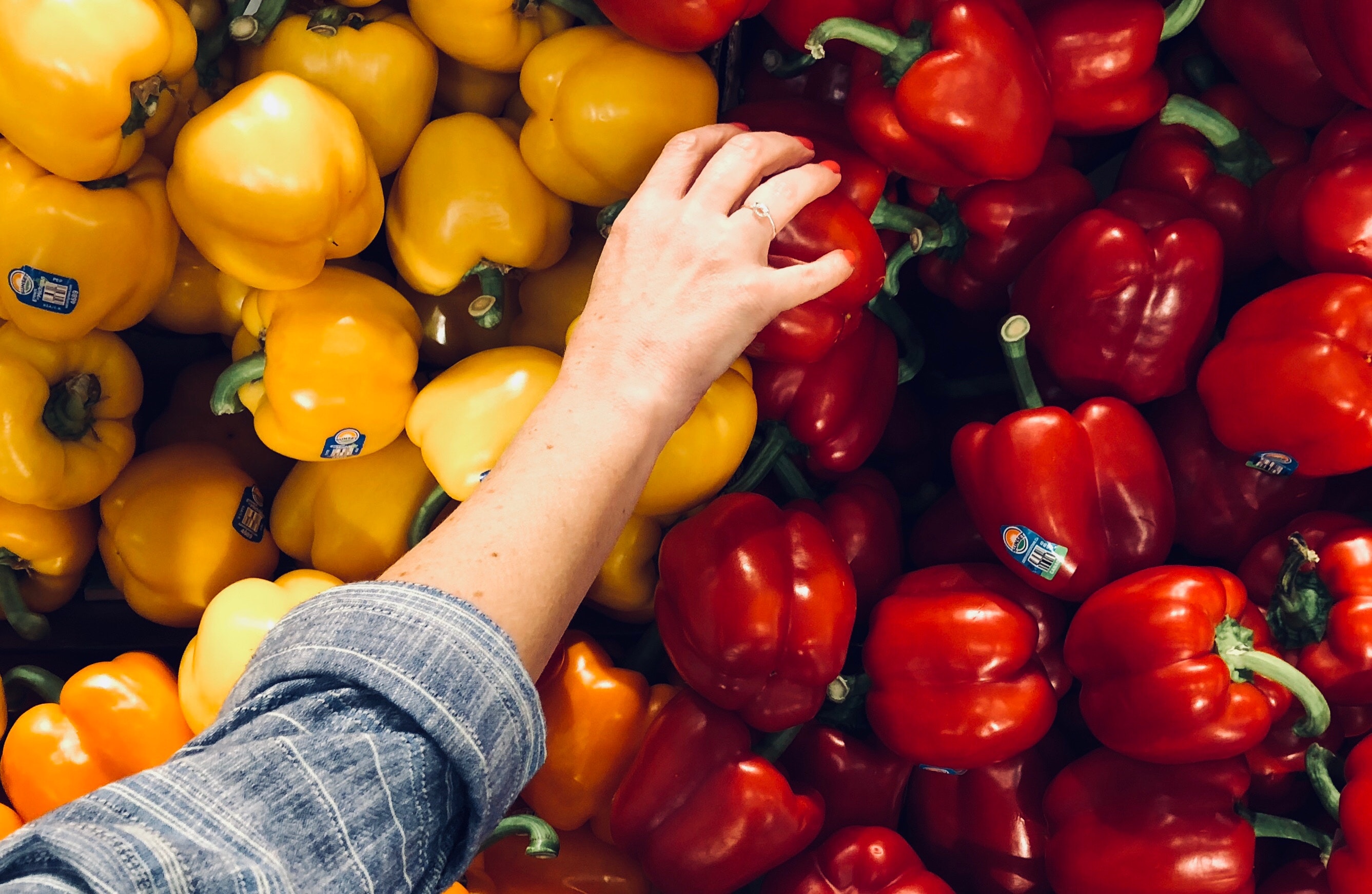 Traditional grocery stores are struggling as Millennials’ food-purchasing preferences continue to shift grocery shopping. So where do they like to fill their carts? We asked 18-35-year-olds where they’re shopping and what they’re shopping for…

We know that Millennials love dining out, but as this foodie generation continues to reach for adulthood, they’re increasingly cooking at home—and that means they’re grocery shopping. Today, the majority of Millennials are responsible for stocking their homes with food, and more than two in three are filling up their carts on a weekly basis. But that doesn’t mean grocery stores are safe from the generation’s general penchant for disruption.

Traditional grocery stores are struggling to reel in the demographic, and the future of grocery shopping is shifting. Last year, federal data found that 25-34-year-olds spent an average of $3,539 on groceries per year, “about $1,000 less in inflation-adjusted dollars than people that age spent in 1990.” According to the Economic Research Service, Millennials also devote less of their food budgets to grocery store purchases, make fewer trips than previous generations, and are demanding healthier and fresher food. The study also found that Millennials value convenience when it comes to grocery shopping, and they’re buying prepared foods far more than previous generations.

In the midst of this, brick-and-mortar grocery stores—which have reached an all-time high in retail space across the country—are beginning to see sales slide. Total grocery sales in the U.S. fell nearly 2% in a 12-week period last year compared to 2017, according to Nielsen data, and big box stores and tech companies alike are challenging the old models with cheaper and more convenient options targeted at the 18-35-year-old shopper. The question is—is it working? We pulled data from our recent Topline on grocery shopping and dining to find out how Millennials are shopping, starting with where they’re filling up their carts: 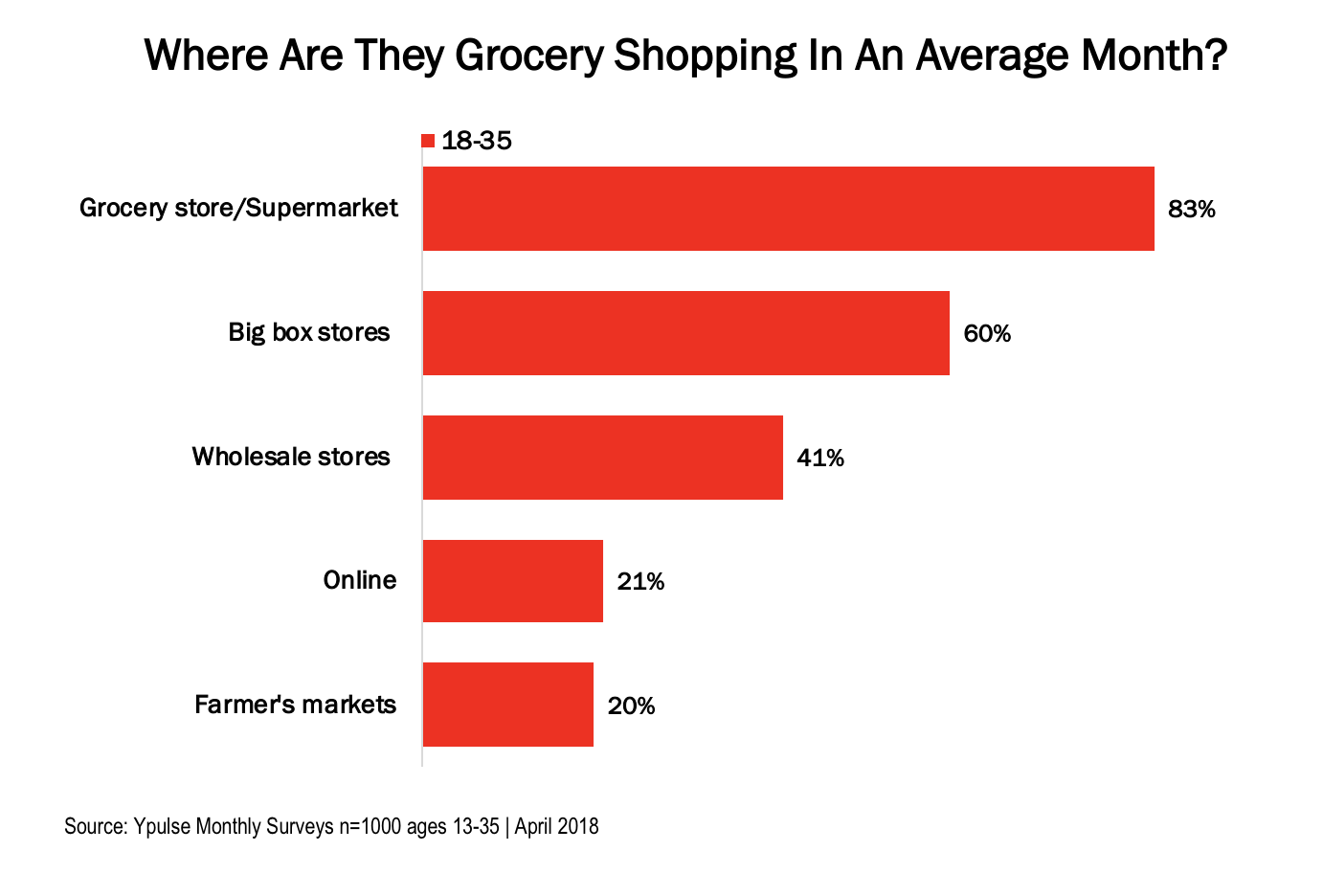 The traditional grocery store/supermarket remains the most popular option for where Millennials are shopping on a monthly basis by a pretty healthy margin, but a comparison to 2017 reveals that the alternatives are slightly increasing in visits. In fact, while grocery stores dropped 3% this year, every other category increased by at least that much. While online grocery shopping has gotten the most hype as a threat to the grocery shops of old, it’s actually big box stores that traditional groceries should be wary of. Last year when we asked Millennials to tell us their top places to shop for groceries, Walmart topped the list. And this trend may continue to pick up steam—the massive retailer is now partnering up with Postmates for grocery delivery. Target has also invested big in their food aisles, and let’s not forget about Amazon. In addition to their purchase of Whole Foods last year and the continued expansion of Amazon Fresh—the company’s grocery delivery service—the tech giant has started opening their Amazon Go locations, or physical grocery stores made for impatient, tech-savvy Millennials. The stores have no checkouts, registers, or lines, and in addition to stocking staples, they sell Amazon Meal Kits. 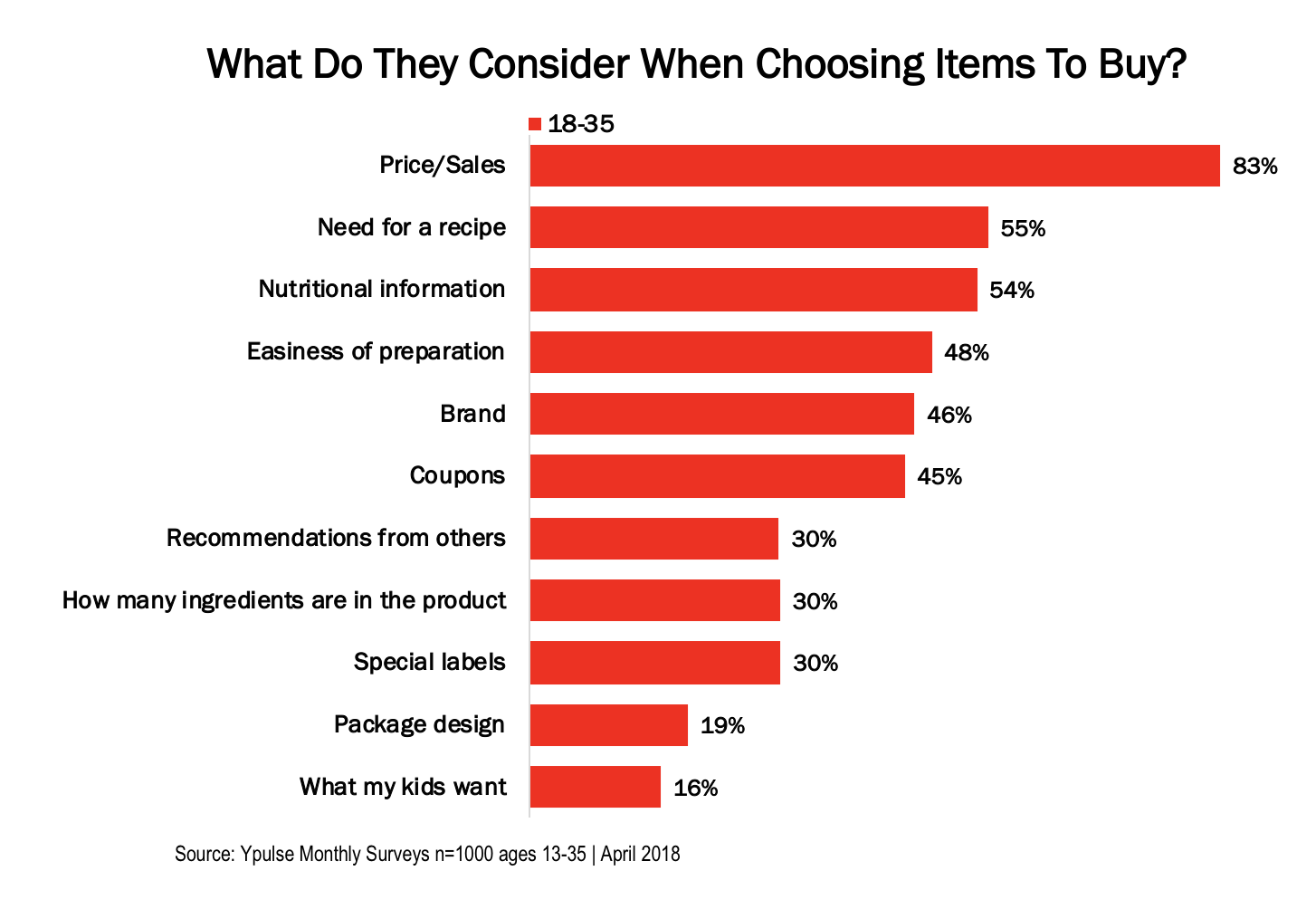 When it comes to shopping for groceries, it’s all about price for Millennials, but they also tend to shop for specific recipes. Forty-one percent of 18-35-year-olds tell Ypulse their shopping strategy involves finding a recipe and then getting the items—the same amount that say they prefer to do their shopping in one big trip—and the generation is increasingly consuming food content (blogs, shows, articles, and more) to get recipe inspiration.

But the generation is also concerned with a products’ nutritional information, and—of course—ease of preparation. For the generation that made national headlines for being so lazy they wouldn’t even eat cereal in the morning, ease and convenience are top-of-mind. The Economic Research Service report found that the average proportion of spending on prepared foods was 7.5% for Millennials compared to 6.6% for older generations, and that Millennials are also buying more pasta and sweets—things that require little to no preparation. 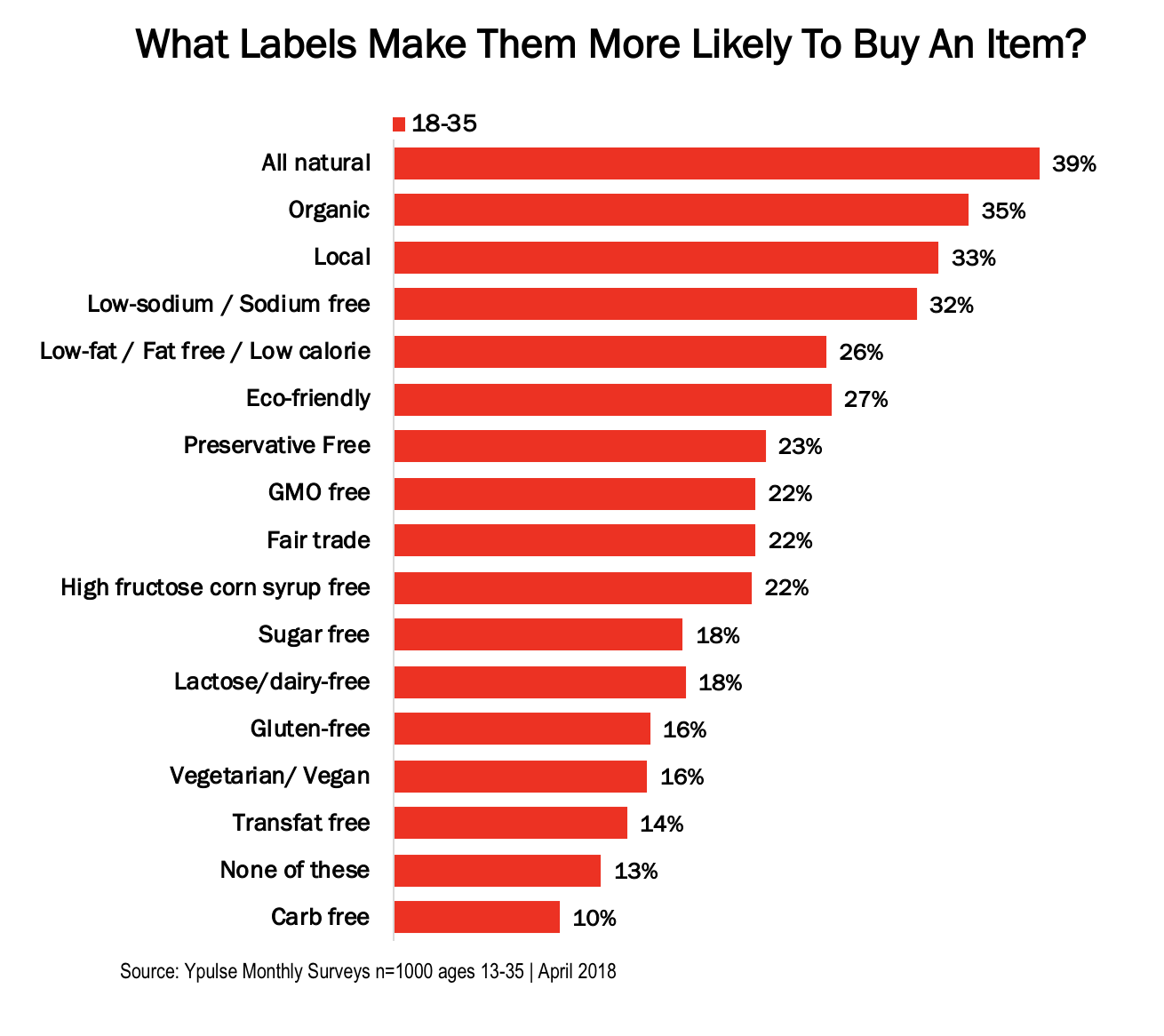 Millennials are known for being healthy eaters—and for driving the burgeoning organic, all-natural, vegan, and gluten-free industries. Sales of food made or grown without pesticides and hormones increased 8% in 2016 compared to an increase of 0.6% in overall food sales in the U.S., and according to recent Ypulse research, four in 10 Millennials say they eat only organic and all-natural food. We can see this reflected in the labels that influence their purchasing decisions, where 39% of 18-35-year-olds tell us they are more likely to buy a product that is all-natural, followed closely by “organic” at 35%. In fact, just 13% of respondents tell us that none of these labels impact their buying, meaning the vast majority are on the lookout for healthier options to take home with them.