The Subscription Services Millennials Are Actually Paying For 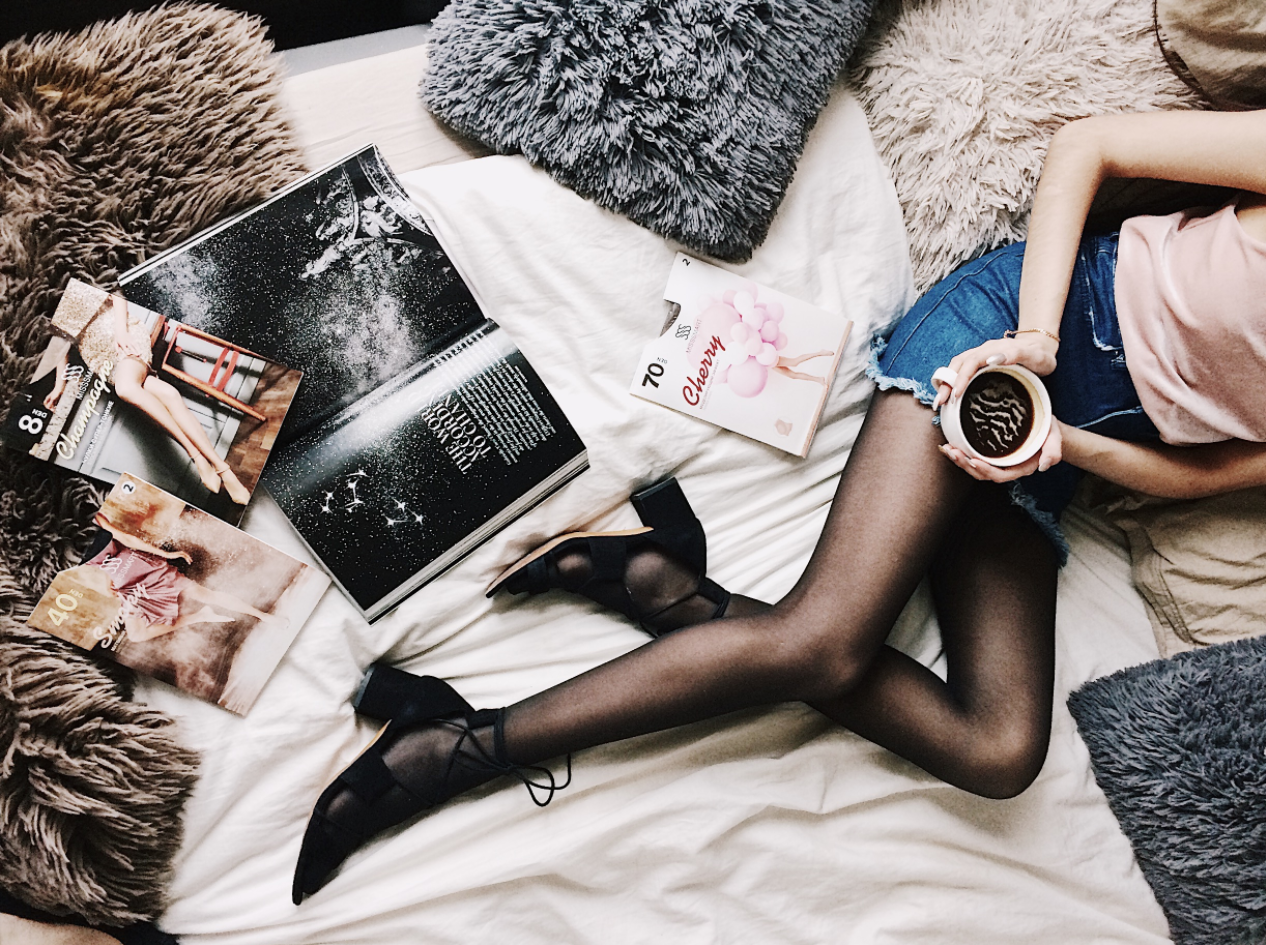 We asked 18-35-year-olds which subscription services they’re actually paying for, from magazines to meal kits and more…

For the generation famously known for wanting everything when and where they want it, getting things on-demand has become routine for young consumers. Whether beauty products, organic meals, the latest TV series, or a ride to the airport, Millennials are indulging their growing impatience and penchant for convenience by buying into the booming on-demand economy, which is now attracting more than 22.4 million consumers annually and $57.6 billion in spending, according to the Harvard Business Review.

Millennials make up nearly half of these consumers, and brands are jumping on board by serving almost everything up in an on-demand package–and adding a “subscribe” button to keep them coming back. Netflix and Uber were front runners in the trend, but when Birchbox hit the scene, a whole new type of shopping was born that hit all the Millennial marks: time-efficiency, personalization, convenience, and slashed prices. Now, the world is on-demand, and Millennials are willing to pay for it. A full 92% of Millennials have active subscription services, according to a recent survey conducted by Vantiv and Socratic Technologies.

But this growing trend is a double-edged sword. While brands like Blue Apron and Dollar Shave Club are increasingly showing up on Millennials’ doorsteps (and spawning copycats), traditional subscriptions and memberships are joining the what-Millennials-killed list. Magazine and newspaper subscriptions are falling rapidly across the board, but our data shows no significant change since this summer.

So what services are winning with Millennials? In our recent monthly survey, we asked 18-35-year-olds to tell us what subscription services they’re actually paying for. Here’s what we found out: 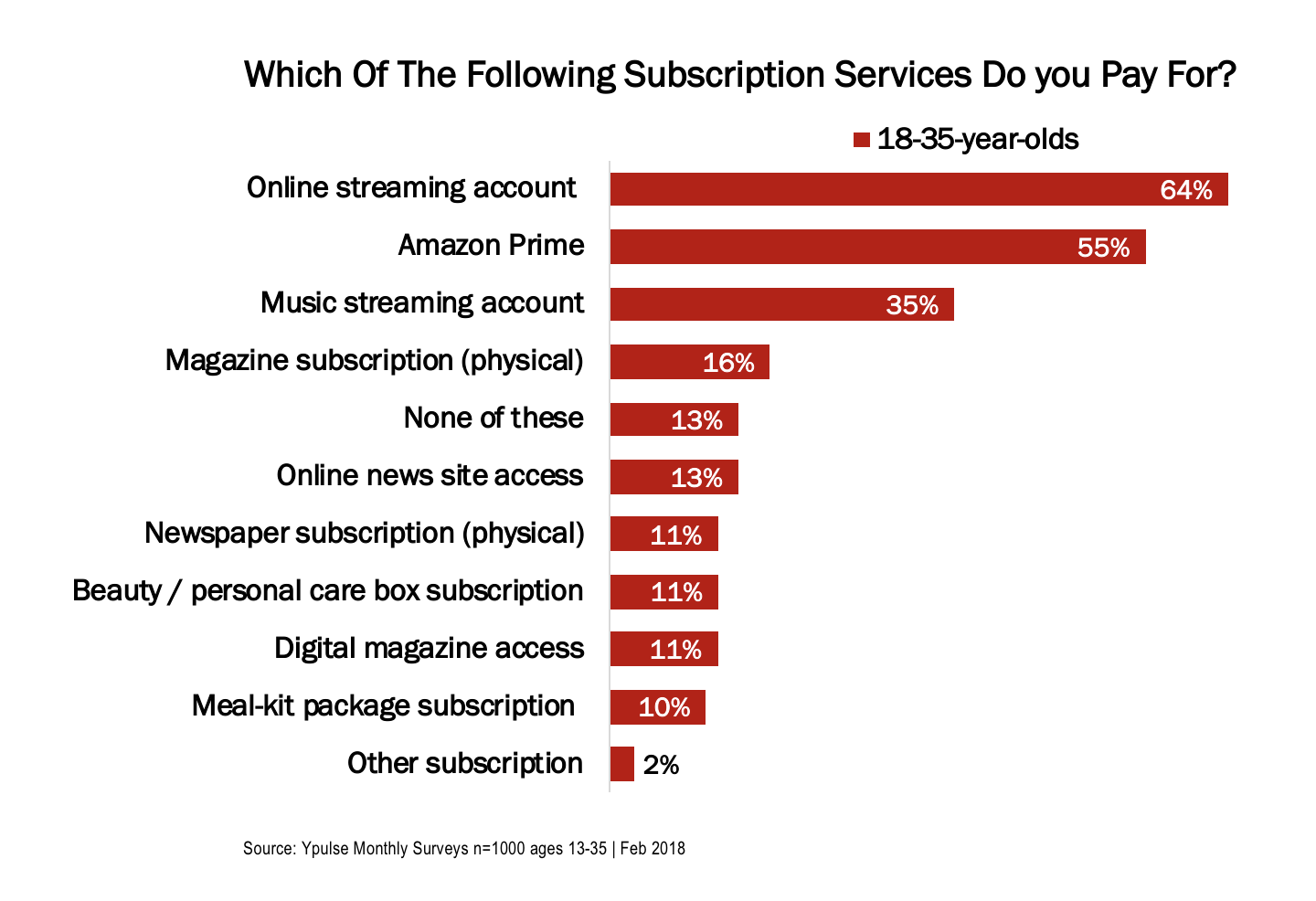 Our research shows that the vast majority of Millennials have some kind of subscription, and the numbers are only going up. Since asking 18-35-year-olds what subscriptions they paid for last summer, nearly every category has seen a notable increase, with the top three categories each growing by 3-4%.

For online streaming services, that should come as no surprise. According to a recent survey of U.S. internet users, the cord-cutting scales have finally tipped, and more people are watch streaming services than have cable. Millennials and Gen Z have been ahead on this trend for some time and are currently consuming far more content on YouTube and Netflix than cable. Netflix is also gaining ground on cable as viewers’ first choice for watching shows. While most Americans are still turning to live TV programming for their viewing, 19% now say their “default” source for programming is Netflix, up from 15% last year. A study from Hub Entertainment Research found that Netflix is the first choice for 50% of 16-24-year-olds—not surprising considering the site’s hold on Millennials. Ypulse research has found that almost seven in ten 18-34-year-olds use Netflix to watch video content weekly, and Netflix is the top “channel” they report watching shows on regularly.

But beyond Netflix’s dominance, Millennials are also more likely to pay for multiple streaming services than other generations. Nearly half (48%) of the demo is already watching content on multiple services, compared to 28% who have only one. And while newer streaming services like Hulu and Amazon are some of Millennials’ favorites, traditional channels like HBO and Showtime are finding success with the demo by creating their own on-demand, digital models.

While their love of on-demand entertainment may partially explain why over half of Millennials subscribe to Amazon Prime, the dominance of the service also speaks to the larger trend: young consumers want the convenience of having everything at their fingertips–and then at their door 24 hours later. This is leading Amazon (and other tech giants like Google) to seriously experiment with drones to get any product to consumers’ doorsteps as close to instantly as they can. Young consumers are expecting everything faster, easier, and more effortlessly than ever before, and are willing to subscribe to the services that will take care of everything they don’t want to.

We should mention, however, that we are starting to see a small backlash to the on-demand craze. Anti-on-demand experiences are on the rise (see HQ Trivia), opening the door for brands to cash in, according to Adweek. “People are scheduling their days around playing HQ,” explained the CEO, “and it’s a very dramatic shift from what we’ve been seeing in digital media with Netflix, Hulu and these services that promise convenience.” HQ copycats and other apps like Headspace are asking users to open them at certain times, while brands Nike Snkrs and Supreme are seeing success with scheduled digital drops because (according to one Nike exec) “Urgency is one of the key currencies that we use.” Does this mean Millennials have reached peak-convenience? Probably not. But it does mean there are opportunities for brands to look beyond the on-demand model, too.