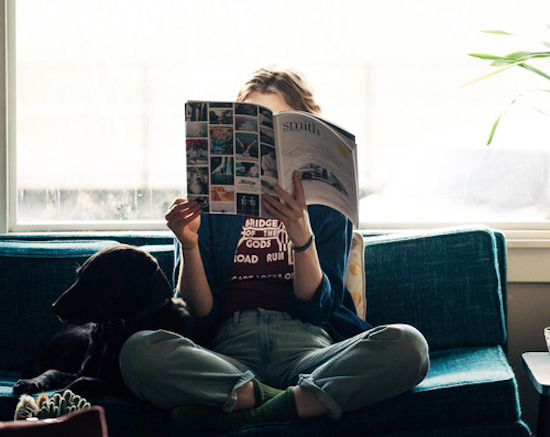 Are Millennials & Gen Z paying attention to any magazines these days? We found the ones they say they’re reading or subscribing to regularly…

There’s no doubt that print magazines have been struggling in the face of the habits of the next generations of readers. When we reported on five things counting on Millennials for a comeback, magazines made the list easily. According to Statista, 112.6 million magazines were sold in the third quarter of 2014, and in the second quarter of last year that number was down to 84.7 million. Titles like Teen Vogue have responded by cutting back on print and bringing focus to creating social-only content like Snapchat pop-up channels and Facebook Live. The brand will invest in digital content, and has seen their online audience grow significantly in recent years. The publication of the magazine itself is going quarterly to keep young readers engaged, going from nine issues annually to four, repositioning new issues as collectibles. Self is another example of print reinventing itself in the wake of the digital era—cutting back on publishing and moving to the social spaces young consumers spend their time on. The publication announced that the February 2017 issue was their last print production, and they’re going all-digital—a first for a major Condé Nast magazine, reflecting the decreasing interest in print in the digital media era.

Ypulse’s own stats also tell a story of struggle for the print magazine industry. When we ask 13-35-year-olds what they spend money on in an average month, only 7% say magazines, and when we ask what subscriptions they pay for, only 15% say they pay for a physical magazine subscription. So what titles are they actually paying attention to and, perhaps more importantly, paying for? In our recent entertainment survey, we asked 1000 Gen Z and Millennials, “What magazines do you subscribe to/read regularly?”* to find out what publications are still drawing them in. Here are the top titles they named:

*This was an open-end response question to allow us to capture the full range of magazines that Gen Z and Millennial consumers read or subscribe to—without our preconceived ideas shaping their responses. As with any qualitative question, the responses include those that are top of mind and those that are most popular. The lists are ordered according to number of responses received, and alphabetically when ties occurred.

First, an important note that half of respondents wrote “NA” in response to this question—meaning there are no magazines that they can think of that they subscribe to or read regularly. Clearly, they’re the reason for all of those titles going digital.

But when we look at the publications that were named by respondents, People got the most mentions. The celebrity/human interest magazine may be an escape for readers these days—while still veering away from the paparazzi and celebrity scandal news that has fallen from popularity a bit. When we look at the mentions by gender and age, we can see that females are driving People’s top ranking: 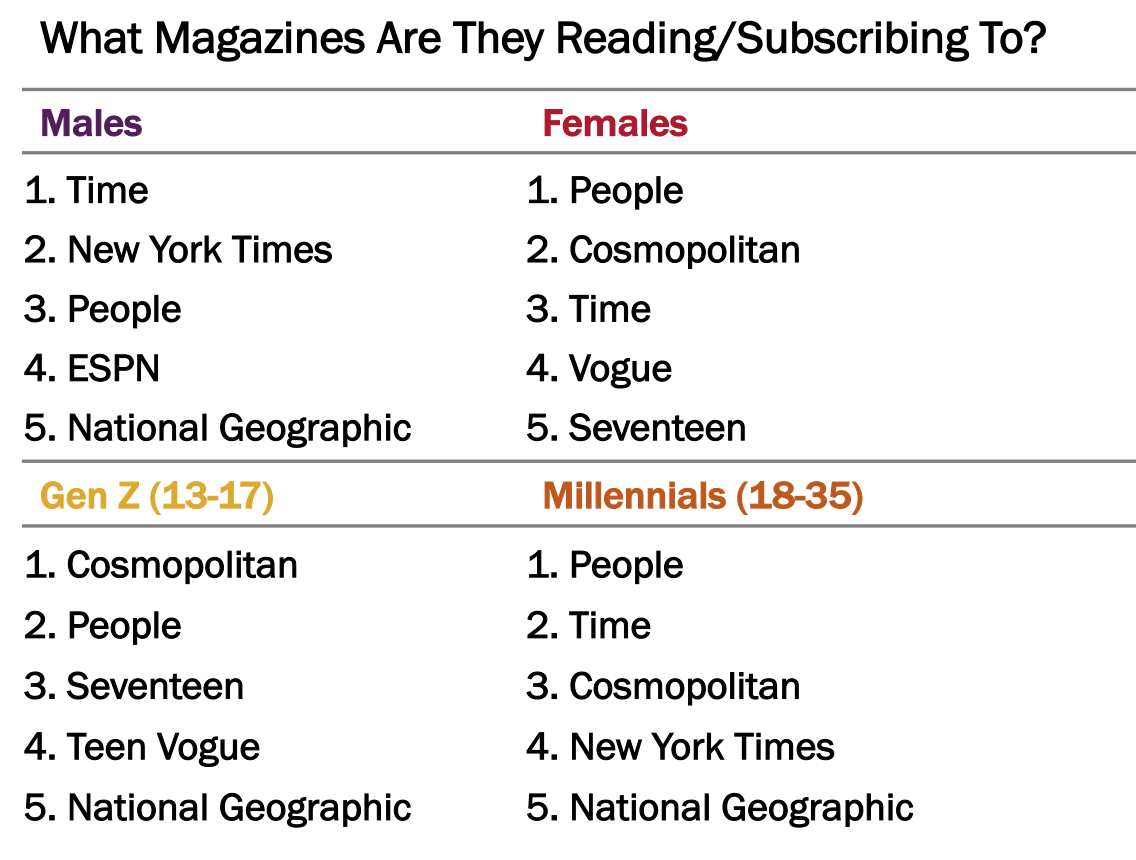 People is at the top of the list for females 13-35-years-old, but for males of this overall age group Time takes the top spot. Interestingly, there is a fair amount of crossover between the top magazines that Gen Z and Millennials say they’re reading. People appears in the top two for both groups, and Cosmopolitan and National Geographic also rank in the top five for each. As for differences, Gen Z was more likely to name Seventeen and Teen Vogue, while Millennials were more likely to name Time and the New York Times Magazine.