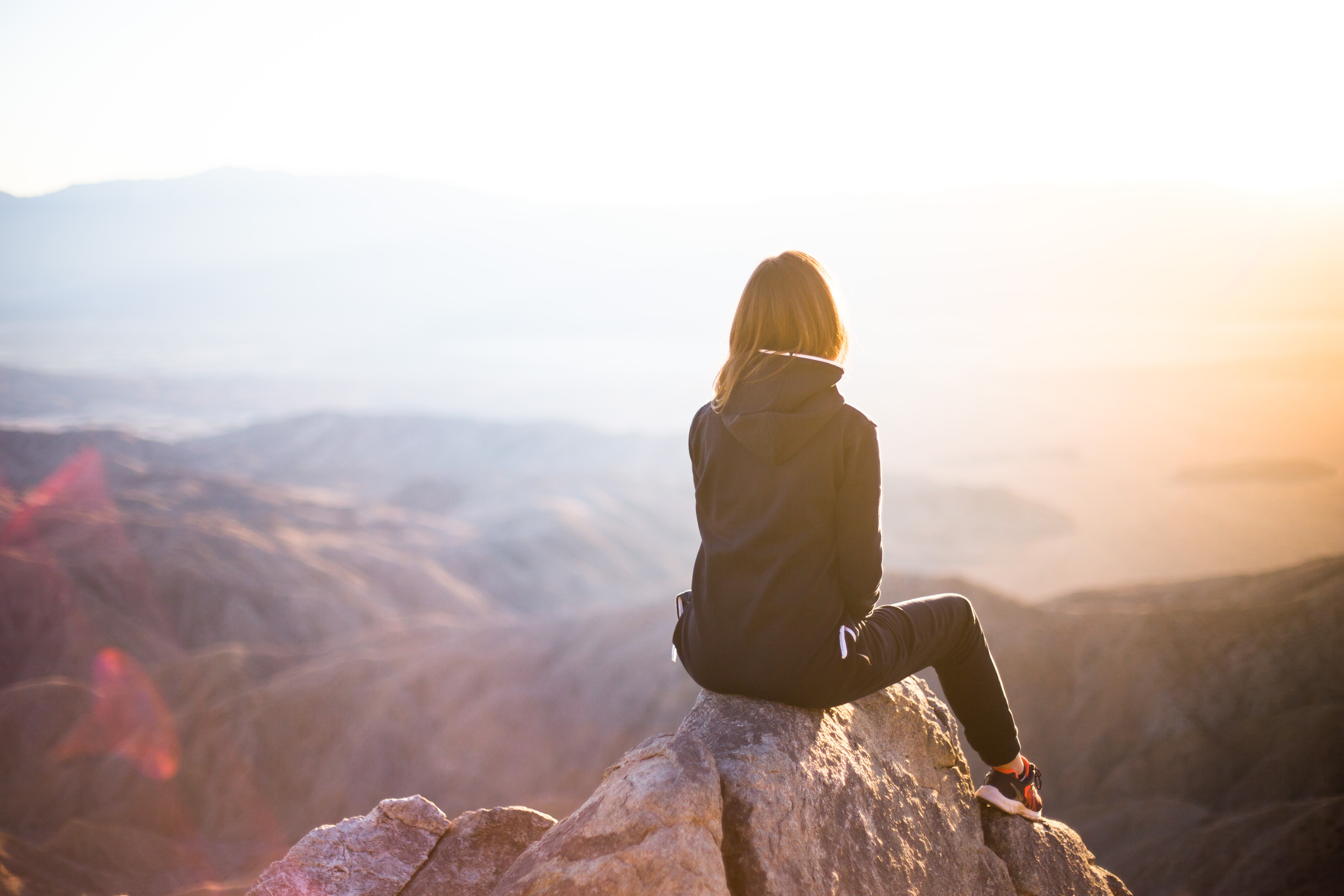 This year, one message is rising above the rest: Forget resolutions. While headlines like “14 Ways To Continue Sticking To Your New Year’s Resolution” still abound, so do pieces like the New York Times’ tongue-in-cheek “New Year’s Resolutions Versus New Year’s Realities,” Quartzy’s “Already break your New Year’s resolutions? Good, here’s why you should keep breaking the rules,” and Business Insider’s more scientific “The psychology behind why we’re so bad at keeping New Year’s resolutions.” Brands are cashing in on consumers’ care-free attitudes, too. Allstate’s Mr. Mayhem broke his resolution to give up his shenanigans in 2017, while SoulCycle’s somewhat counter-intuitive “Screw Resolutions” campaign encouraged people to “eat the damn cookie” and “cancel more plans”—banking on Gen Z & Millennials’ love of staying in.

Publications and brands betting on a more blasé attitude towards New Year’s resolutions might be on to something. Millennials and Gen Z have continued to make resolutions, but their faith in the practice might be slipping. Last year, 61% of 13-35-year-olds made a resolution, according to Ypulse data. This year, 53% say they have made one or plan to make one, and only 38% say they are more likely to keep goals made on New Year’s than goals made at other times—according to our most recent monthly survey. Even fewer (35%) say they believe that how they start the New Year will determine how the rest of the year will turn out.

In spite of the resolution reality check, the majority of Millennials and Gen Z are still setting New Year’s goals for themselves—and they look a lot like last year’s. In both open-end and closed-end questions, we asked 1000 13-35-year-olds to list their New Year resolution(s). In the open-end, their top answers were to lose weight, exercise, be healthier, and be an overall better person than last year. For the closed-end, we asked what category their resolution best fits into to get a better sense of what they’re hoping to achieve in 2018. Here’s what we found: 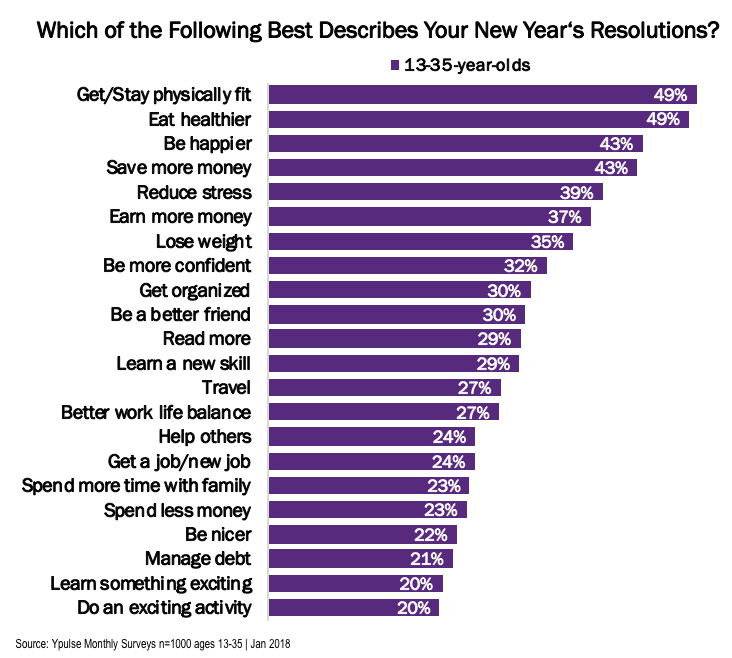 In classic New Year’s resolution fashion, health and fitness goals topped the list this year. But unlike last year, fitness is tied with eating healthier. Additionally, losing weight moved down the list four places, with 35% of 13-35-year-olds listing that as their number one goal compared to 44% last year. The growing Body Positive movement could have something to do with it. Gen Z and Millennials alike are calling for the acceptance of all body shapes and sizes. Even Weight Watchers reworked their message to fit the bill, according to Fast Company. Their “Beyond The Scale” campaign shows that they’re focusing more on lifestyle and less on dieting. And it’s resonating with young consumers: Weight Watchers’ revenues are rising and its average consumer age is falling.

At the same time, the self care movement has taken off and is showing no signs of slowing down. An ad hoc movement spawned on social media, self care advocates championed prioritizing personal health, especially In Their Heads. With “be happier,” “be more confident,” and “reduce stress” all moving up the list this year compared to last, it’s clear that these generations are looking to prioritize self improvement and self care this year.

These goals are much more prominent for Gen Z than Millennials: 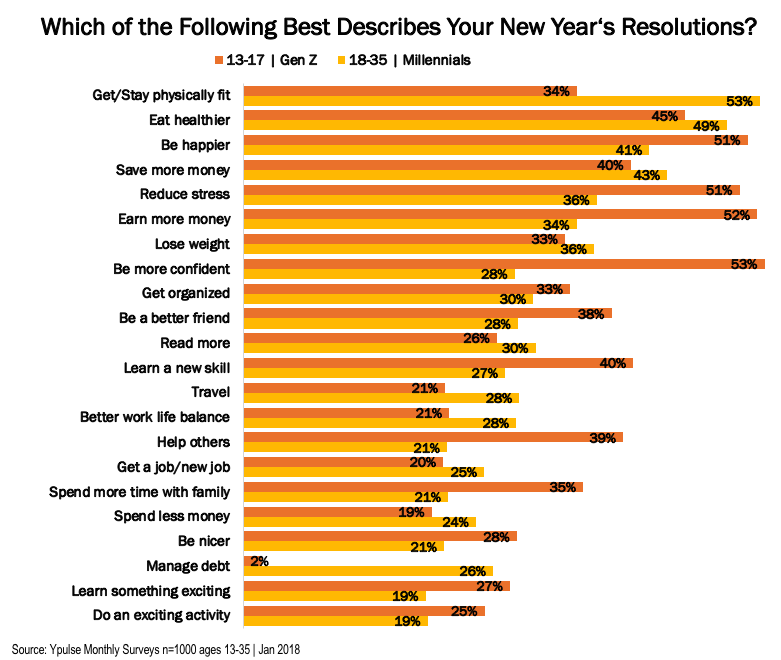 It makes sense that 13-17-year-olds are 16% more likely to list “reduce stress” as a top goal. The American College Health Association found a 12% increase in undergrads reporting “overwhelming anxiety” from 2011 to 2016, and several studies concur that “there’s just been a steady increase of severely anxious students,” as reported by the New York Times. Gen Z is also twice as likely to list “be more confident,” making it their number one goal.

For their part, Millennials are much more concerned with health and fitness. Getting fit comes in at number one for 18-35-year-olds, but falls to number 10 for Gen Z. However, both generations are equally interested in eating healthier, saving more money, and losing weight.

Broken down between genders, fitness, health, and weight loss are top goals for both, but females are clearly more prone to setting these types of resolutions: 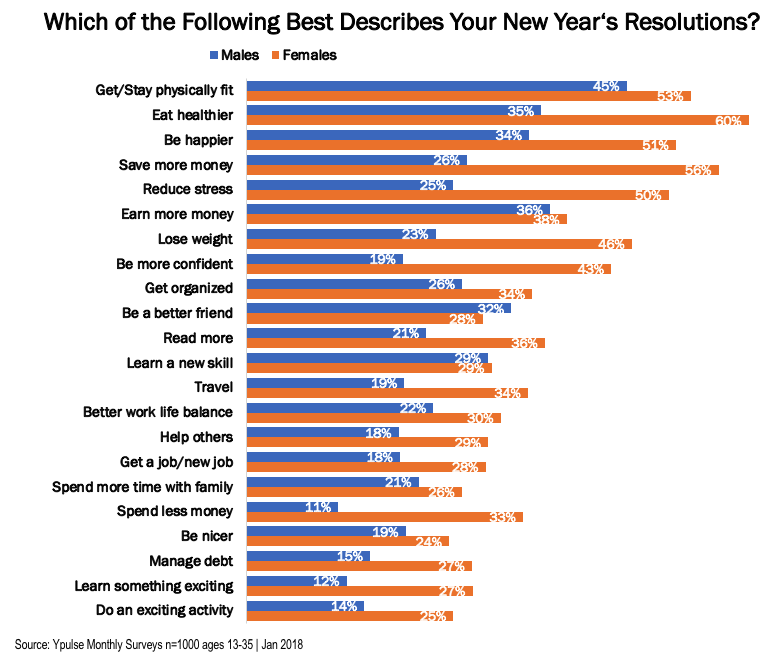 In fact, females are more likely than males to set every category on the list as a top priority except one: “be a better friend.” And though the top goal for males is also “get/stay physically fit,” the second most popular goal for males is to make more money, followed by eating healthier and being happier.