When we asked Millennials what their biggest goals are right now, their adulting mindsets were more than evident…

Millennials are known for reaching typical adult milestones far later in life than previous generations, and have long been criticized for prioritizing fun over “real” achievements. For years, splashy headlines have claimed that Millennials prefer travel over buying a home (or even paying the bills) and want pets instead of kids. And let’s not forget last year’s viral avocado toast comment, which cast Millennials as irresponsible spenders that choose trendy food over fiscal responsibility. In 2013, Time Magazine notoriously dubbed Millennials the “Me Me Me Generation” and the less-than-flattering terms to describe them—lazy, entitled, selfish, shallow—have followed them into adulthood.

Most of these stereotypes have since been debunked, and to their defense, Millennials entered adulthood at a particularly unstable time. The housing market crashed, jobs were scarce, and Millennials were left over-educated, under-employed, and drowning in debt. Even though the economy has since stabilized, Millennials are still getting the short end of the stick when it comes to cost of living. According to recent data, Millennials make 20% less than Boomers did at the same age, and those with degrees and debt make about the same as Boomers with no degrees did in 1989. Tuition prices have skyrocketed, as have housing prices. All of this adds up to paint a bit of a different picture for Millennials: It’s not that they don’t want the touchstones of adulthood; it’s that many remain just out of reach. But that doesn’t mean Millennials aren’t reaching for them now. In our recent monthly survey on life milestones, we asked 18-35-year-olds to name their biggest personal goal right now,* and they didn’t list trendy food or travel…

*This was an open-end response question to allow us to capture the full range of goals that Millennials say they’re working on—without our preconceived ideas shaping their responses. As with any qualitative question, the responses include those that are top of mind and those that are most popular. The lists are ordered according to number of responses received, and alphabetically when ties occurred.

Education, career, housing, finances, health—these are the things Millennials are thinking about. In other words, pretty adult stuff. The top two goals show that while Millennials have largely been let down by the promise of higher education, they’re still not convinced there’s a better way. But right below those goals of higher degrees is the goal to be debt free, followed by finding a job, which came in four slots higher than “Get my dream career,” showing that while Millennials may be idealistic at times, they’re more concerned with practicality than the headlines would have you believe. In fact, when YPulse asked 18-35-year-olds what they consider important aspirations, 94% said being debt free, 92% said having a meaningful career, and 81% said owning a home.

It’s worth noting, too, that many of the goals of Millennials are the same as those of Gen Z. Both generations listed getting a higher degree, finding a job, getting a dream career, and losing weight as top ten goals. While this could be further proof of a late start to adulthood for Millennials (i.e. today’s young adults are thinking about the same things that teens are focused on), we think it’s the other way around: Having seen their Millennial peers struggle to get out the gate after their teen years, today’s 13-17-year-olds are feeling the pressure to get a head start.

Despite being debt free coming in at number three for Millennials, this list also shows that they aren’t going to get out of the vicious cycle of debt anytime soon. The fact that the top two goals are education-related shows that their debt free goal is likely more about paying off debt than avoiding taking it on. This is made even more clear by looking at the top goals of younger Millennials versus older Millennials: 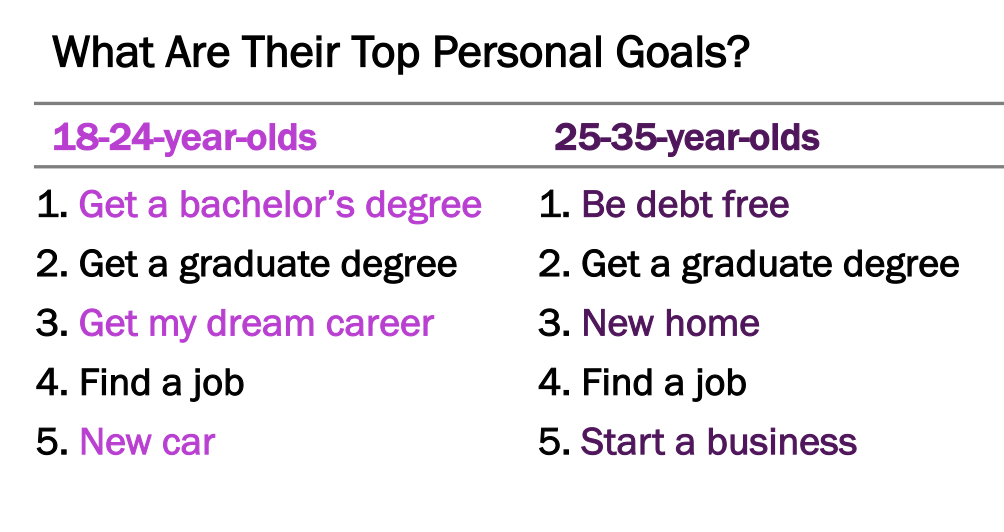 Having already been through their undergraduate education, older Millennials are now focused on becoming debt free and obtaining those more elusive adult milestones—a house, a job, and maybe even a business of their own. But it’s worth noting that even this older cohort still feels the need to get more education before they can advance to other adult milestones, with “Get a graduate degree” coming in at number two for 25-35-year-olds. This highlights another barrier Millennials are facing in the slow crawl to adulthood: To be successful, this generation has to be more educated than any previous generation. And it’s still not a guarantee of wealth.

Though both older and younger Millennials listed “new home” as a top goal this year, the older cohort is far more focused on real estate. And while the myth may be that this means they’re just now planning to move out of their parents’ basements, it’s likely that a good portion of them are actually looking to buy. Despite headlines that say otherwise, Millennials are actually buying more homes than any other generation and have been for the past four years. NAR’s 2017 Home Buyer and Seller Generational Trends study reports that Millennials make up 34% of homebuyers compared to 30% of Boomers, and LendingTree says that on average, 36.1% of all their mortgage requests in 2017 came from Millennials, a slight increase from the year before. Ypulse’s own data shows that 8% of 18-35-year-olds bought a house with their own money last year, and 13% anticipate doing so in 2018. Additionally, 81% of Millennials told us that they consider owning a home a somewhat or very important goal, proof that while adulthood may be delayed, Millennials are still making their way there.