Disney gets the internet’s approval with their new Mulan, Burger King’s Flamin’ Hot Mac n’ Cheetos are here and so are the YouTube reviews, the backlash for Victoria’s Secret’s fashion show keeps coming, and other stories that had the internet talking this week…

Burger King has finally given in to the masses with a flamin’ hot version of their Mac n’ Cheetos this week, and the YouTube reaction videos just keep coming. Flamin’ Hot Mac n’ Cheetos, born out of a flood of consumer requests for the spicy version of the chain’s viral limited-time menu item of mac n’ cheese sticks with Cheetos dusting, was first released as a frozen-aisle version in Walmart and, according to this tweet, didn’t last on shelves very long. Now the new cheesy snack with a very spicy twist can be found in Burger Kings nationwide, inspiring a trending YouTube challenge of food-enthusiasts daring to try and review the highly-anticipated menu item. 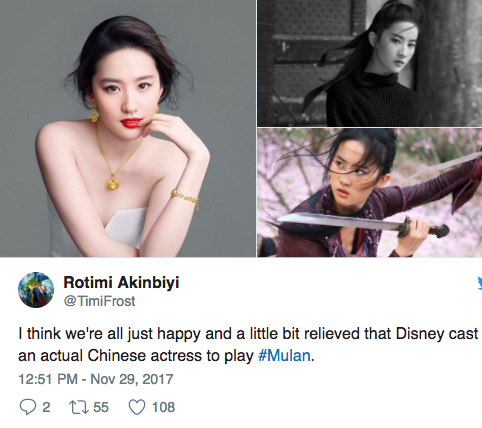 After a closely watched worldwide search with screenings of almost 1,000 candidates, Disney has found their new Mulan—and the internet is here for it. Chinese actor Liu Yifei, well-known in China for her successful film and television career, fulfilled the filmmakers’ wishlist for an actor who could speak English, had “credible martial arts skills,” and most importantly is Chinese. With Hollywood undergoing a lot of scrutiny for “whitewashing” during castings, reactions on Twitter are praising Disney’s decision as a step in the right direction. As one tweet explained: “I think we’re all just happy and a little bit relieved that Disney cast an actual Chinese actress to play #Mulan.”

Victoria’s Secret’s 2017 fashion show, already entangled in racial controversy, is now experiencing even more backlash with a recently released backstage video of its models singing the n-word. The viral video, initially posted on social media by Victoria Secret model Karlie Kloss, shows a sea of models—only one of whom was Black—singing Cardi B’s “Bodak Yellow” and not refraining from singing the n-word within the lyrics. Internet backlash was swift with the clear message that non-black people should never be able to voice the word out loud. The show was already surrounded by racial tension in China, and the brand is also being called out for using headdresses “resembling that of indigenous people’s”during the show.

Lauren Ko and her high design pies are Instagram’s latest viral food find. The pie-only Instagram account @lokokitchen, featuring Ko’s intricately and beautifully designed pies, first found fame when website Design Milk reposted a photo of one of the creations to its own Instagram account. The original post has since racked up over 11,000 likes and Ko’s follower count has shot up to over 72,000—but it’s not just Ko who has found fame with her Instagrammable creations. Searching #pieart on Instagram pulls thousands of highly designed pies, and with the holidays coming, there is probably going to be a lot more inspired pie art to come.

The internet keeps watching the replay of Drake pouring Perrier into his stadium cup, Twitter is once again really excited for Applebee’s happy hour, a poem about plums in an icebox inspires a meme that is winning the internet, everybody can relate to this Christmas card, signs you’re a real adult is trending, and are upside-down Christmas trees now a thing?