A teen app is going viral—and giving positive vibes, a Twitter typo from Bon Appétit is being roasted by Millennials, the most buzzed-about foods of the week (there were a lot), and more stories you’ll want to check out… 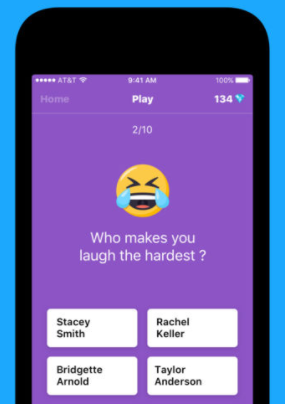 Currently number one on the iTunes Free Apps chart with over 700,000 downloads, tbh is undeniably the hottest app out right now. We covered the Gen Z-targeted app—which stands for “to be honest”—this week as a social app to watch, and it’s already gone viral. The platform is similar to highly-controversial Sarahah and YikYak in that it allows users to send anonymous reviews to each other, but with a twist: it has to be positive. Now, teens can’t stop posting on social media about its self-esteem boosting power, with positive reviews streaming in on Twitter. If you ask us, an app like this is a long time coming: our Play Nice trend revealed that nine out of ten 13-32-year-olds wish people were more positive on social media. 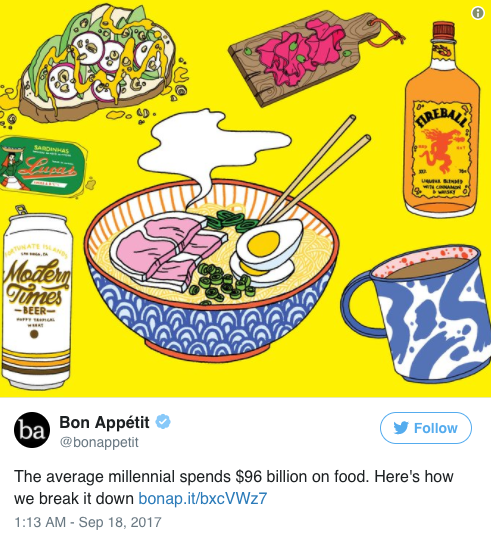 Bon Appétit Gets Roasted by Millennials

A Twitter typo made by Bon Appétit this week prompted a wave of “savage” responses for accidentally being a hilariously accurate portrayal of how the media treats Millennials. In an effort to repost their 2016 article on Millennial spending, Bon Appétit added this fun caption: “The average millennial spends $96 billion on food.” The tweet went viral, as did the responses that followed. In one popular tweet with over 35,000 likes, @ellenbroad calls back the Millennial myth on avocado toast stating, “I am so stupid why did I spend all my billions on avocado I had so many billions.” Bon Appétit took it all in good stride, responding, “*Sips coffee* This is why you don’t tweet at 1 a.m.”

The Viral & Edible This Week

Speaking of food, a lot went viral this week. Pizza with a twist had a viral week with a tweet featuring candy corn pizza racking up over 34,000 likes, and pumpkin spice pizza (yup, pumpkin spice pizza) drumming up a buzz. Also trending in the edible space: Oreo launched a hot cocoa mix, Fireball Cinnamon Whiskey bagels have arrived, and Chipotle’s new queso prompted a large response (but not for the reason they intended). Disneyland has also struck gold again with a viral food item. Their new Instagrammable Oogie Boogie glow-in-the-dark popcorn buckets—based off the character from Nightmare Before Christmas—are creating lines that go for hours and are selling up to three times their original price tag on eBay. One Instagram post showing off the Halloween souvenir has generated over 2,000 likes. 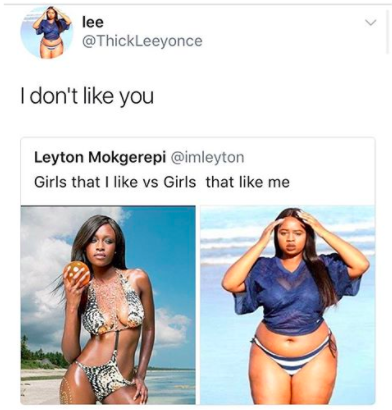 A Blogger’s Plus-Sized Clapback is Trending

A South African plus-size blogger is going viral, and getting some celebrity love, for her response to fat-shaming. Twitter user @imleyton posted a picture of the blogger, Lesego Legobane aka @ThickLeeyonce, next to a picture of a slimmer model and the caption “Girls that I like vs Girls that like me.” Legobane, who did not give consent to have her picture used responded simply, “I don’t like you” in a tweet that has gone viral, with over 950,000 likes (including two from Ariana Grande and Nicki Minaj). She also responded with a longer post on Instagram that ended, #FatAndStillOuttaYourLeague. Staying body positive is a crucial trend among young consumers today, which is evident in the over 200,000 followers Legobane has acquired.

Elf on the Shelf inspires a trending rhyming meme, Toys ‘R’ Us has gone bankrupt and nostalgic Millennials are not responding well, an Albino woman’s review of Rihanna’s new inclusive cosmetics line is going viral, and Liam Gallagher’s explanation of the decline of the music industry racks up 100,000 likes on Twitter in 24 hours.