The 3 Biggest Marketing Trends Out of SXSW 2017 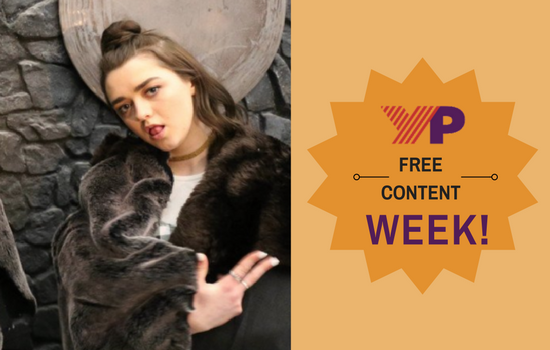 It’s free content week, and we’re counting down our most popular articles of 2017 so far—giving all our readers access to one each day. Here is the 2nd most clicked, originally published March 20th, 2017. Enjoy!

(Want to find out what the MOST clicked article of the year was? Just click here!)

Experiencification ruled the festival, but branded experiences come in all shapes and sizes…

The latest SXSW is a wrap, and though big brands are not treating the festival as the free-for-all, big-budget marketing bonanza they have in years past (which many feel is a good thing) the event is still considered to be “the most valuable weekend of the year.” Forbes calls it the “best brain food”—which might be the best way for other brands to view the event. Because marketing at SXSW is targeting a hyper-engaged audience of industry insiders, it’s often a creative-cut-above-the-rest, and can serve as inspiration for others.

Throwing just any event at SXSW is not enough to generate buzz—even for the biggest brands. (Just look at Apple Music’s concert.) Experiences have to be eye-catching, unique, sharable, and over-the-top creative to gain traction beyond the Austin streets and make enough of an impression to be shared. Take Casper, one of the marketing stars of SXSW this year: the brand upped the ante on their 2016 “Napmobile” activation, taking over the hotel with The Standard’s One:Night app and turning it into the ultimate nap destination. Attendees could reserve “Refresh Rooms” complete with Casper’s mattresses, Tesla slippers, milk and cookie snacks, and even a tuck-in and bedtime story from an on-site “mom,” if requested. As evidenced by the buzz the stunt generated, experiencification was once again the fuel of the stand-out campaigns of the festival. But branded experiences come in all shapes and sizes, and this year we saw three major experience/immersion themes emerge from the days of the fest. Here are the biggest marketing trends of SXSW 2017: 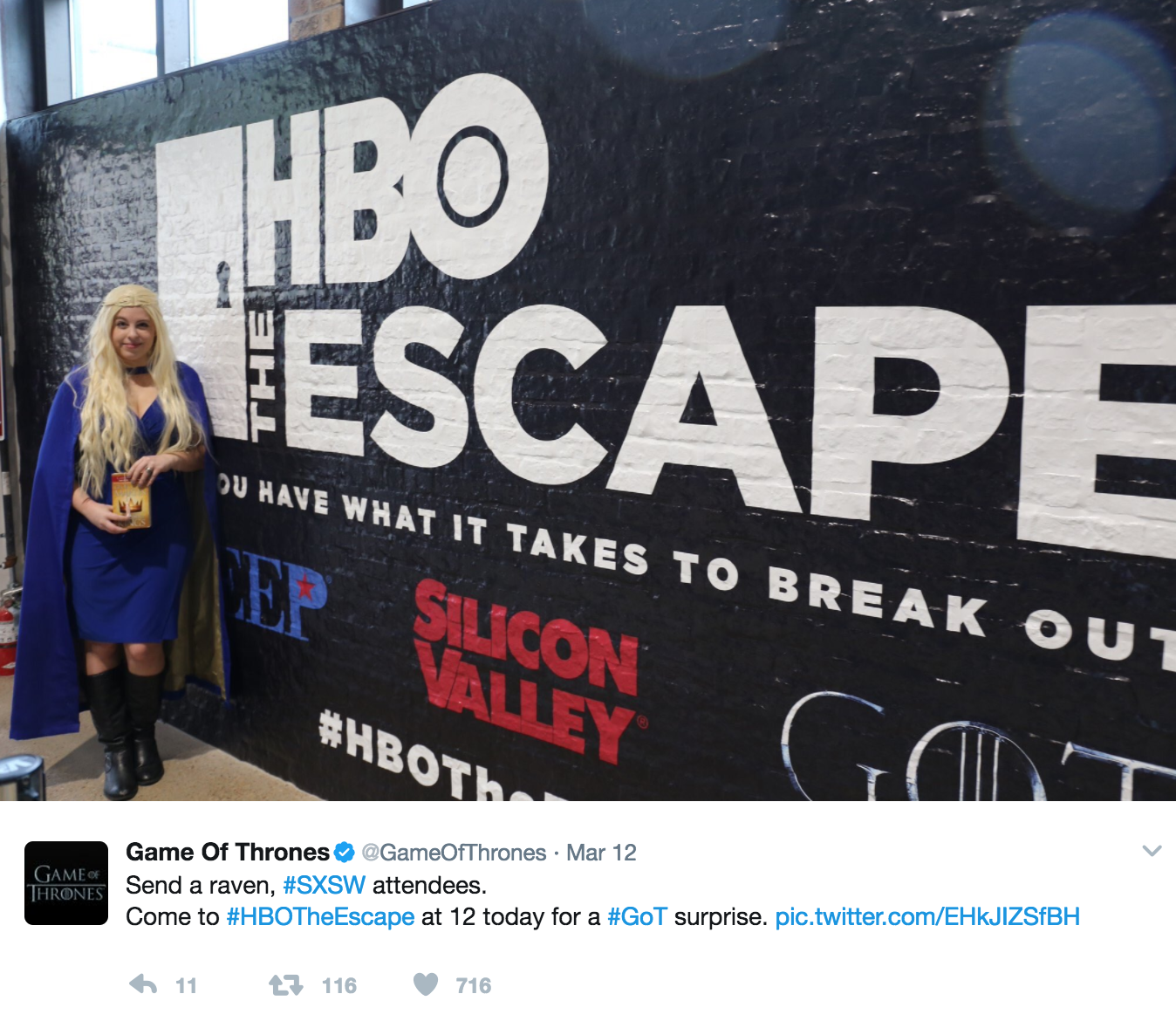 Escape rooms emerged a few years ago as a unique group experience that Millennials helped turn into a lasting trend, and now they’ve been adopted by marketers who are turning the real-life puzzle adventures into branded activations. The allure of escape rooms was clear at SXSW, where HBO created three rooms themed around different shows: Game of Thrones, Veep, and Silicon Valley. Attendees could book a time at the installation to take their turn at being locked in the spaces and puzzle their way out. The exactingly detailed rooms gave visitors the feeling of being in the shows, and HBO even brought in cast members to participate themselves, posting videos of the actors escaping from their own show rooms and others. Fox also joined in on the escape trend, taking over The Escape Game Austin for, appropriately, their show Prison Break. 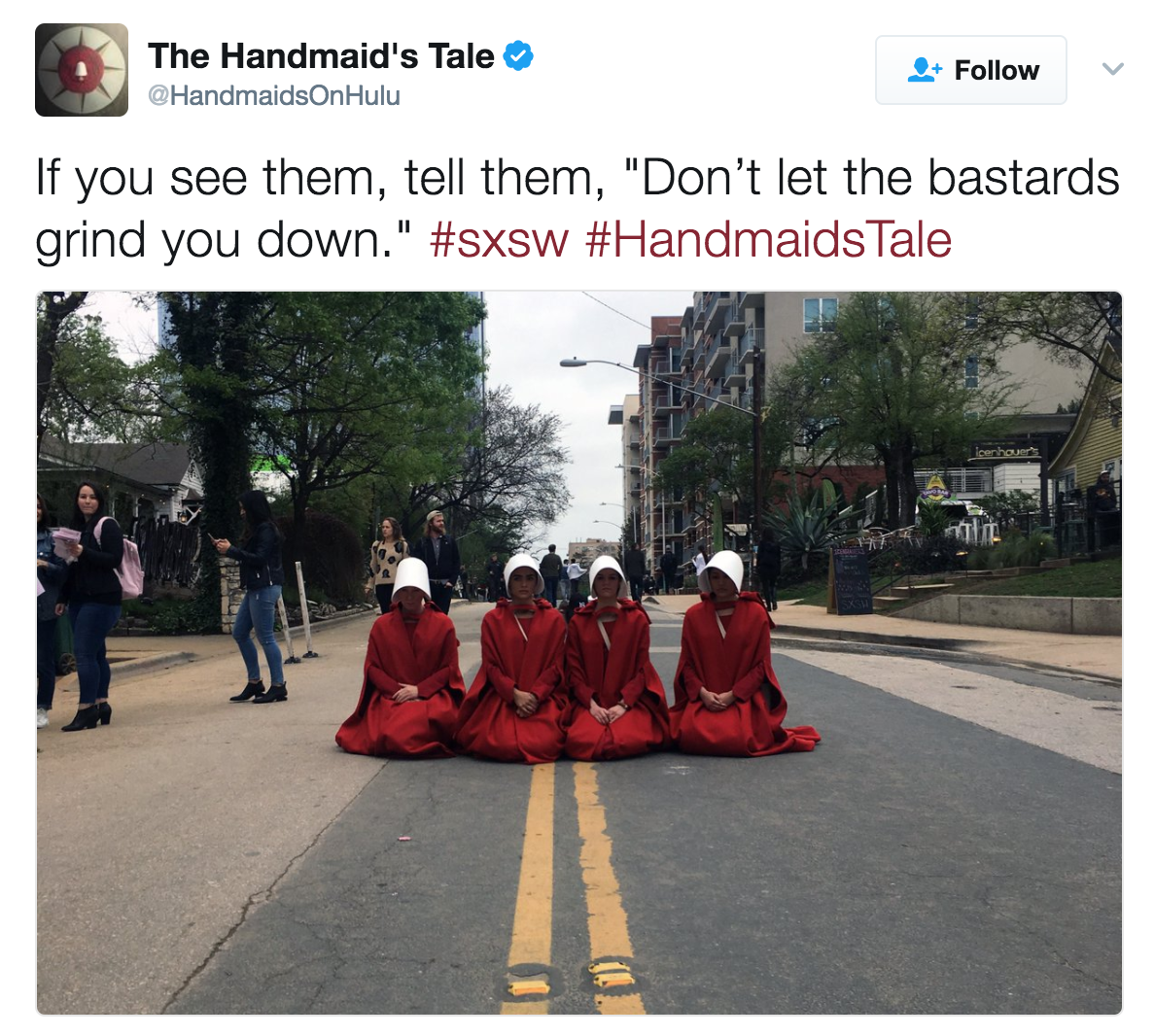 SXSW is a sprawling event, so holding an activation or hosting a house doesn’t guarantee that you’ll be seen by everyone—which is why some brands take to the streets. This year, several brands created experiences by releasing branded individuals into the festival crowds, earning plenty of rubbernecking and chatter. Hulu brought attention to their upcoming The Handmaid’s Tale with groups of women dressed in the story’s iconic red dresses, walking the streets in complete silence or sitting in public spaces chanting—in other words, bringing the story and the series to life in front of attendees’ eyes. The women were visually striking, helping to create plenty of online chatter and photo sharing. Bravo was another network using a human spectacle to spread the word about a show, sending a crowd of near-naked models into the festival—on a rainy day no less—for their new series Stripped. 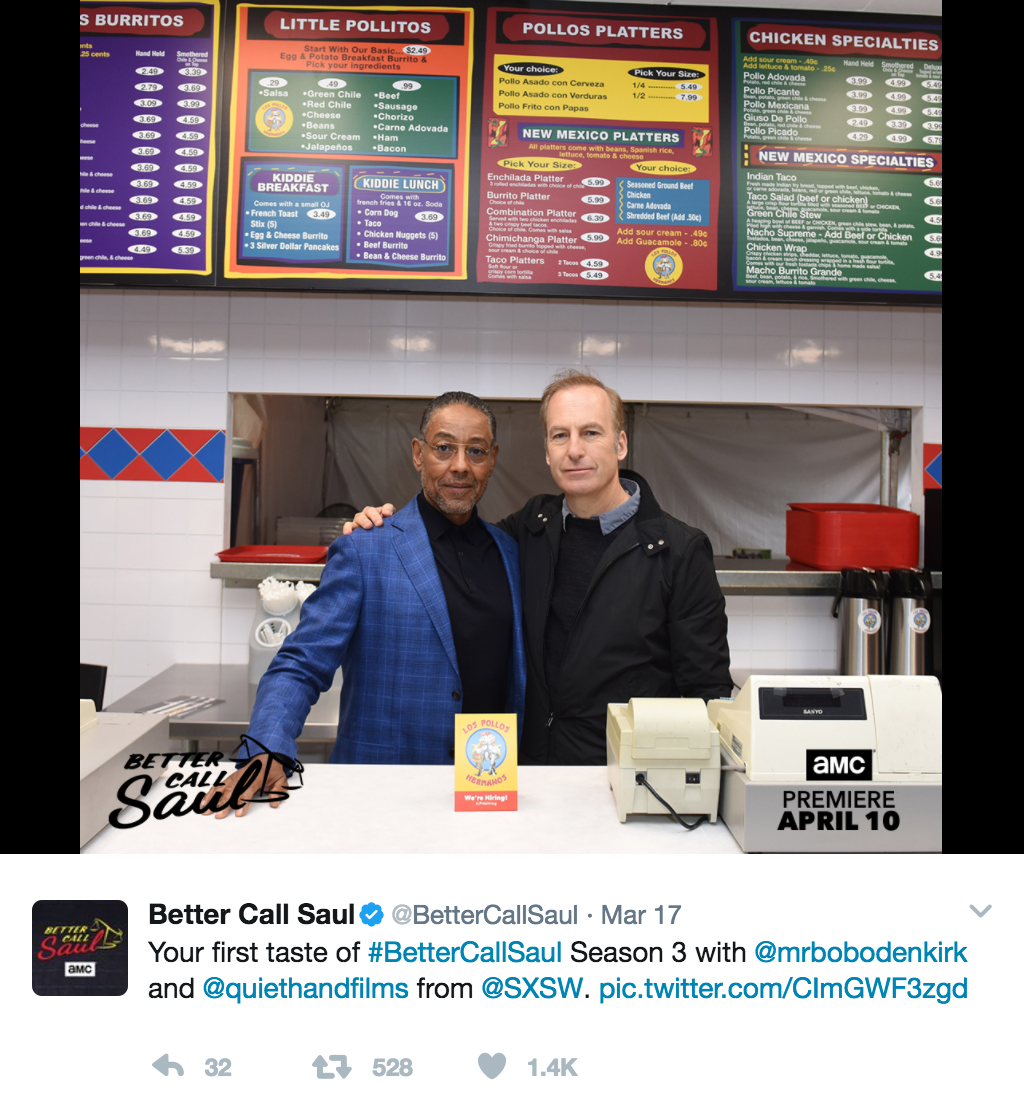 Creating iconic locations from beloved movies and TV shows IRL has become a go-to tactic for marketers—or restauranteurs—looking to ignite Millennials’ nostalgia and grab their dollars in the process. At SXSW, visitors could visit a real life version of Breaking Bad’s infamous Los Pollos Hermanos chicken chain—a food experience created in honor of the network’s Better Call Saul spin off. Not nostalgic enough for you? To celebrate (promote) the reboot of Twin Peaks, Showtime built two IRL locations from the cult series, including the fictional Double R Diner, famous for its coffee and pie. Both iconic TV restaurants benefitted from visits from their shows’ stars to thrill fans further.