Do Gen Z Teens Plan To Have Summer Jobs? 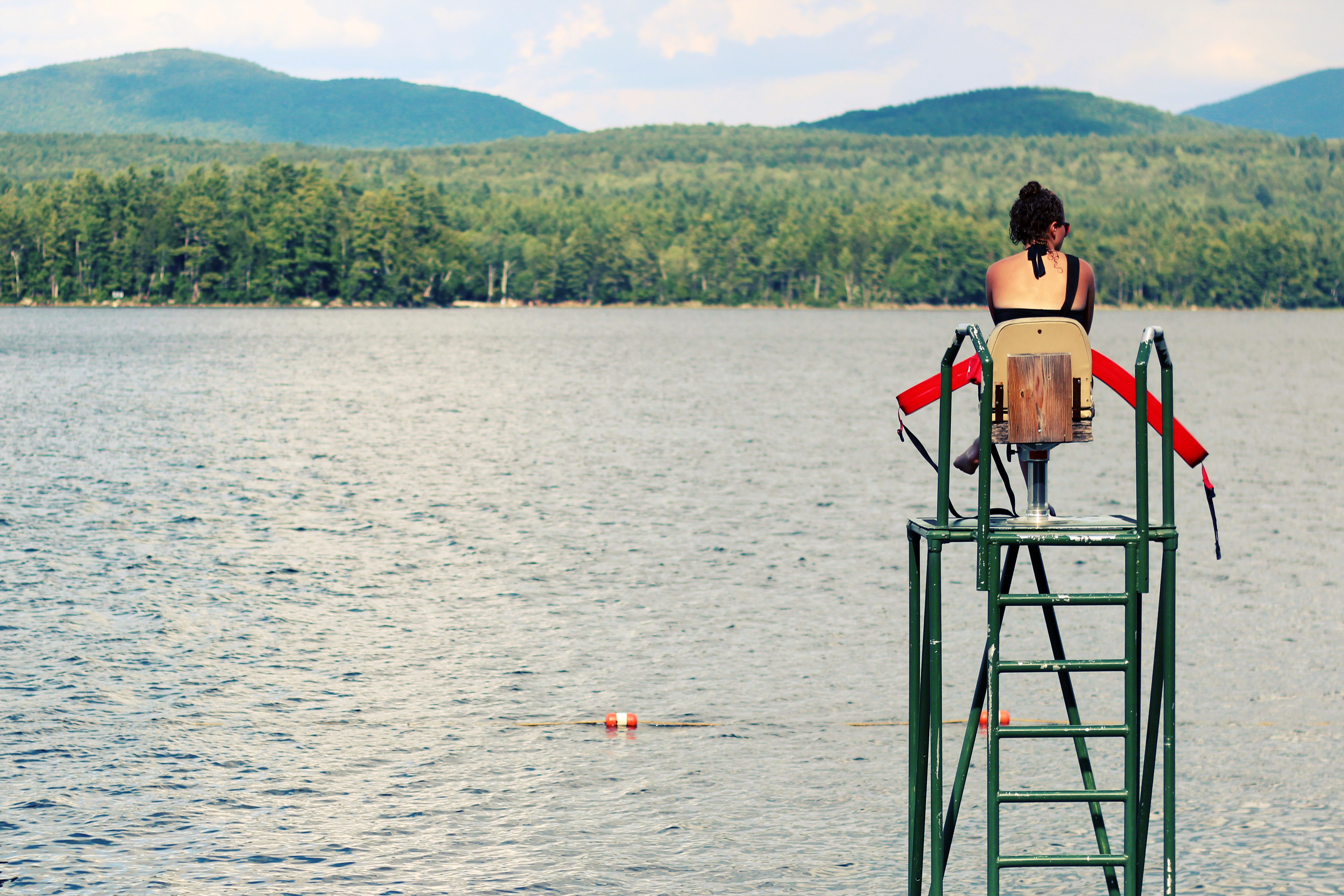 Headlines about summer teen jobs disappearing are cropping up, but does Gen Z even want them? What are Gen Z teens planning to do during the coming months? We asked them…

Summer jobs for teens are “disappearing.” Or is it that teens aren’t applying for the jobs that are out there? We’ve seen recent declarations of both. According to the Wall Street Journal, retailers, which account for roughly 25% of teen jobs, are shutting down stores in droves, potentially taking their summer teen jobs with them. But Bloomberg reports that teen employment has seen a steady decline since the ‘70s—from a peak of 72% in 1978—not because teens can’t find jobs, but because they’re not looking for them. Instead, more and more 16-19-year-olds are enrolling in summer school each year. And it’s not just to make up failed classes, but to take advanced classes as well. Remember when summer school was akin to a death sentence? Well, Gen Z is reportedly going voluntarily. Compared to the 1980s, more teens today are taking the classes needed to attend a four-year college, and compared to just four years ago, enrollment in advanced placement classes is up almost 40%.

Last summer, we heard the same predictions about low summer teen job employment, but in the end it saw a major rebound, increasing by “more than 15 percent to its highest level since 2013.” When we asked 13-17-year-olds what they did over their summer vacation, “work” was the 4th most common response. So what does Gen Z have planned for the coming months? In our recent survey on summer plans, we asked 13-17-year-olds exactly what’s on the summer horizon. Here’s what they tell us their summers hold: 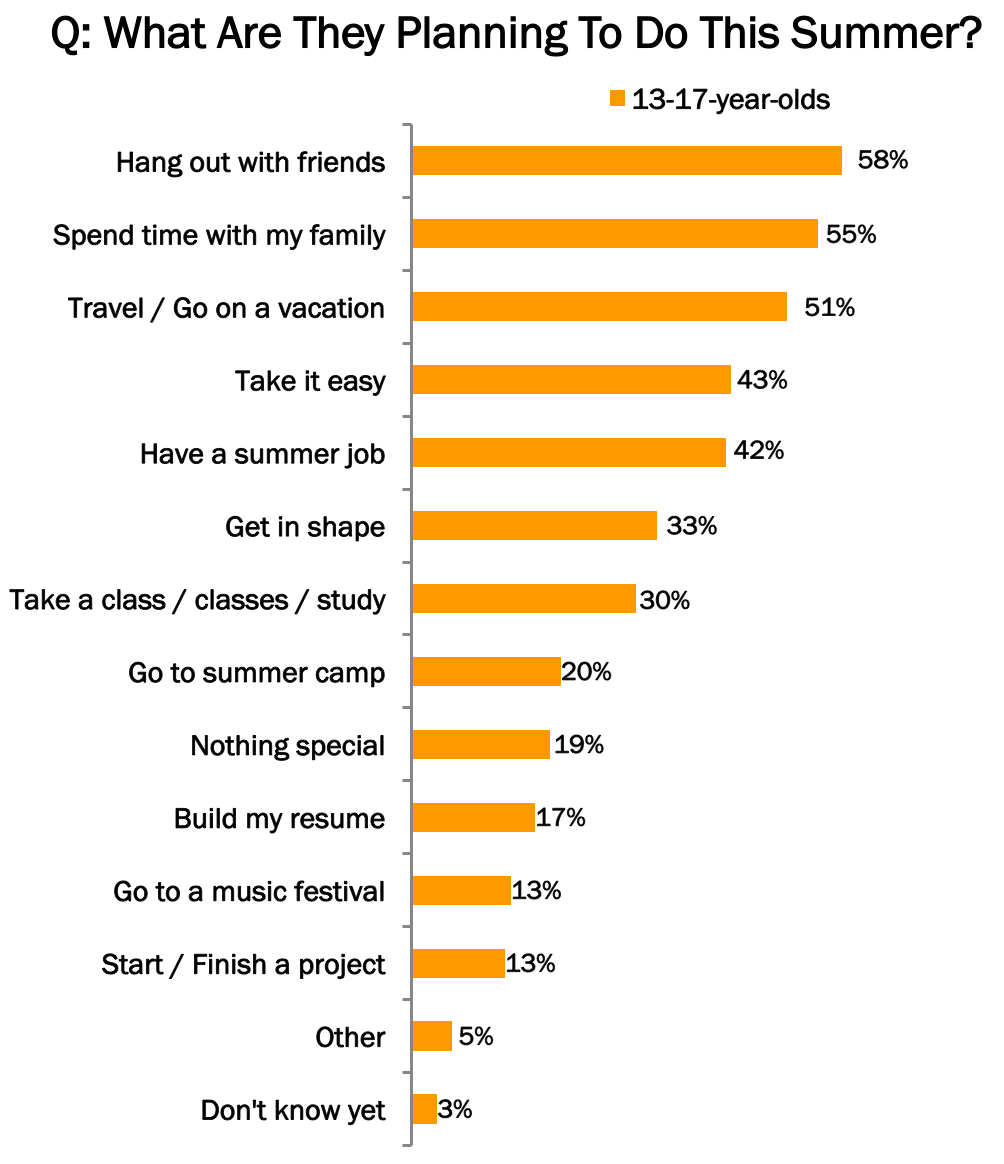 Hanging out with friends, spending time with family, and going on vacation are, unsurprisingly, the top-ranking summer plans. But over two in five 13-17-year-olds say they plan to have a summer job, about as many who tell us they plan to “take it easy.” But even though a respectable number of teens plan to have summer jobs, the teen job market is still far smaller than it has been historically. According to the Bureau of Labor Statistics, “Even though some teens still have summer jobs, the proportion of teens who participate in the labor force during the summer has dropped dramatically. The summer break typically includes July. In July 2016, the teen labor force participation rate was 43.2 percent, down almost 30 percentage points from the high point of 71.8 percent in July 1978.”  And indeed, we see hints of the other pursuits that might be keeping them away from those summer teen jobs: three in ten say they plan to take a class / classes / study, and almost one in five tell us they’ll be building their resume this summer.

But among those who do plan to have jobs, are they sticking with the summer classics? We asked (as an open end) what their summer jobs would be:

What summer job are they planning to have?

Despite the news about retail jobs disappearing, retail is the top planned job among Gen Z teens. However, if combined, restaurants and fast food jobs would land the top spot instead. The restaurant industry currently employs one third of all working teenagers, thanks to a recent uptick in teen employment. According to the Bureau of Labor Statistics, teens made up 35% of all restaurant workers in 2016, the highest percentage since 2009. Teen participation in the restaurant industry was above 50% until the Great Recession when it started a steep downward trend, causing staffing challenges across the industry. But it’s too early to know if the recent boost in employment signals a new trend or is just “a temporary blip.”

Of course, some Gen Z teens told us that they don’t know what job they’ll have yet, and other said they’ll take any job they can find—indicating that though they plan to have some job, they might be disappointed.