Mystery Solved: What Teens Were Up to During Summer 2016 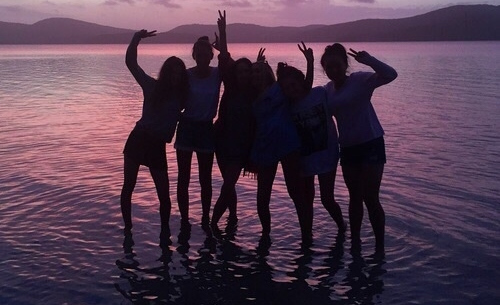 What do teens do during their down time? We asked what 13-17-year-olds were up to during summer 2016 to find out.

There seems to be a lot of mystery around what teens do during their down time. Older generations (and brands) know it must be different from what they did when they were young, but less clear is exactly how they fill their hours. What they did during their summer vacation is a good place to start, but even that has some confused. Right before the season was in full swing, analysts speculated that running into a teen working at the mall or on a boardwalk would be a rarity, due to a downward trend of 16-19-year-olds obtaining summer jobs since the 1970s. Demand for seasonal young employees hadn’t been as high, and teens were reportedly opting to instead volunteer and enroll in educational programs to “pad their college applications” instead of working. But turns out that they spoke too soon. This summer saw a major rebound in teen employment increasing by “more than 15 percent to its highest level since 2013.”

Obviously, this group is setting a new standard when it comes to how to spend the dog days of summer, so what exactly were the 13-17-year-olds up to? We recently asked over 300 teens the classic question, “What did you do over summer vacation,” to rank their top ten summer pastimes:

*These were open-end response questions to allow us to capture the full range of teens’ activities for the summer of 2016. As with any qualitative question, the responses include those that are top of mind. The lists are ordered according to number of responses received, and alphabetically when ties occurred.

WHAT DID THEY DO OVER SUMMER BREAK?

The top five activities for teens this past summer were travel, spending time with friends and family, going to the beach or swimming, working, and playing video games.

Most teens may not have the financial resources (or freedom) to travel like the rest of the Millennial generation, but that doesn’t mean they’re sticking around at home all summer. Whether it was tagging along on a family vacation, taking a day trip nearby, visiting family, or doing a mission-based outing, many teens did some travelling during summer 2016. Our recent travel survey revealed that 89% of 13-17-year-olds who went on vacation the past year went with parents, but they aren’t necessarily travelling against their will: 67% of 13-17-year-olds say they are very to extremely interested in taking trips and travelling to different destinations, signifying that the age group is definitely on track to desire experiences abroad as much as Millennials. One 13-year-old female told us, “I traveled to many exciting places like L.A and San Diego. I love traveling.”

It isn’t too surprising that more teens were using their three months of freedom to make extra money, making work the fourth most frequent response. Teens today have a different outlook towards life than the generations that came before them. Having witnessed the Great Recession, members of this generation can be frugal and wary, and are placing great importance on their education and career paths. Many described working to save for college, some worked part time, but some also said all they did this summer was work.

Relaxing also came up often in responses, and for many that meant playing video games, reading, sleeping, and in the words of one 15-year-old male “Nothing. Nothing at all.” One 13-year-old female said of her relaxing summer: “I spent a lot of time at home with my mom. We went to the beach and rented a cottage right on the shore. We read a lot of books together,” while another 16-year-old female described her downtime as “Slept, ate, watched anime and YouTube, read a lot of books, traveled a little, had my wisdom teeth removed.” One 16-year-old female from Nevada said this summer she, “Netflix and swam.”

Despite the isolating nature of digital devices today, teens still made time to hang out with their friends and family outside of the online space. Although a few described skyping and texting friends, one 16-year-old female said she “[spent] time with my family and friends at the beach, the movies, whatever we wanted to.” Family time was also important to many, with one 14-year-old female saying she “hung out with grandparents while [her] parents worked,” and many describing trips to and visits from their relatives.