How Young Consumers Are Going Out To Eat, In 4 Charts 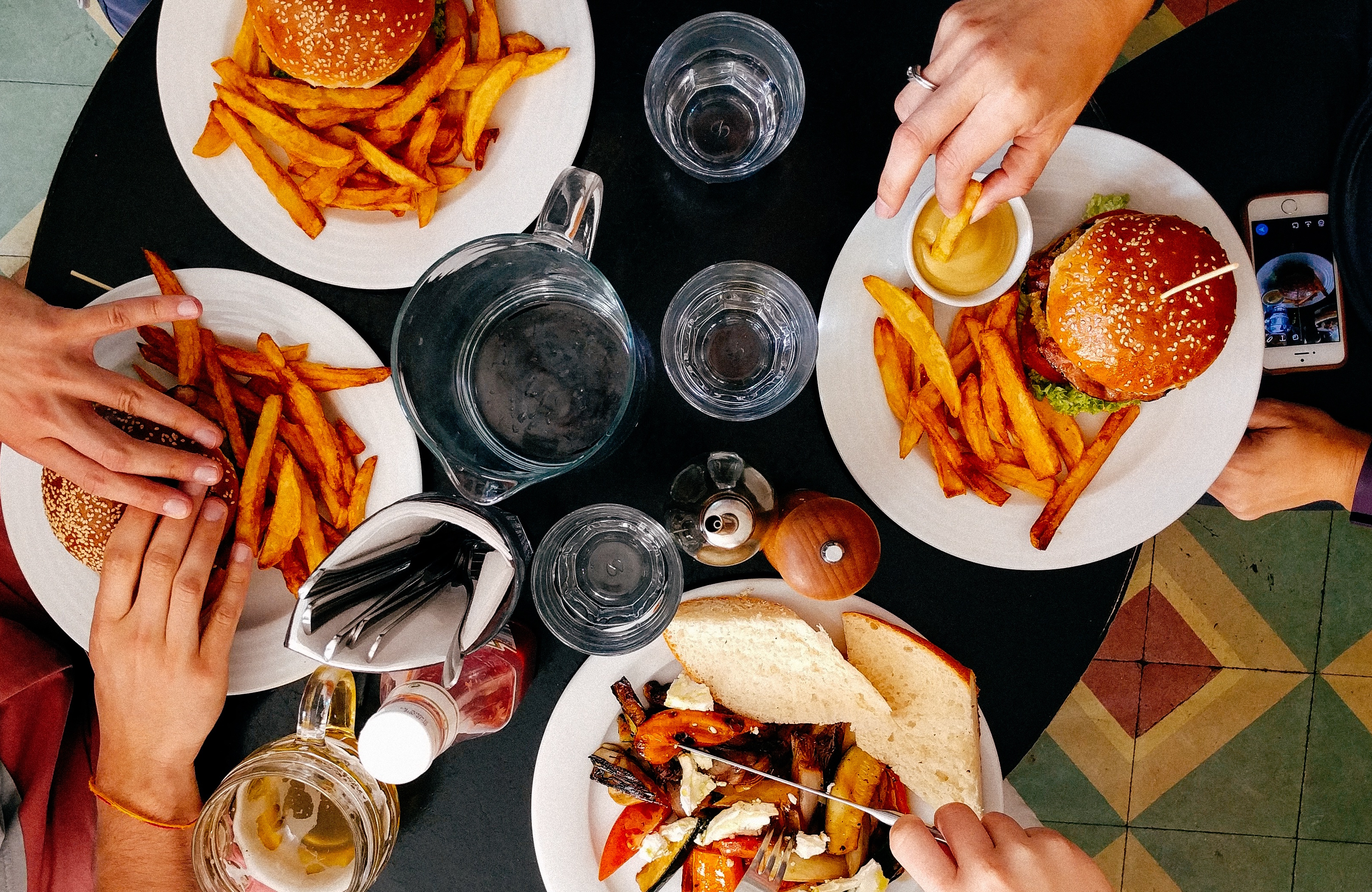 We surveyed 18-33-year-olds to find out where they’re going out to eat, how often, and more…

Millennials have earned their reputation as thrifty shoppers and bargain hunters, but there is one area where they have been outspending Boomers—dining. For this generation, as we’ve explored, food is more than sustenance—it has become part of the new status symbols and acts as a form of “social currency.” When we asked 18-33-year-olds, what they prefer to spend their money on first after they have what they need (all their bills are paid and the fridge is stocked), “dining out” is the top response. Eater explains that The Great Recession may have caused financial instability, but thanks to Millennials, it didn’t stop “foodie” culture. While dining-out expenditures dipped slightly between 2007 to 2008, they quickly rebounded in 2012, even though income levels had not. To get through the financial crises, Millennials opted to consume experiences instead of expensive material goods like houses or cars. That elevated the idea of dining out at the same time that food was becoming entertainment thanks to TV shows and other content devoted to cuisine and chefs.

Young consumers are continuing to spend more money on experiences than older generations. JPMorgan looked into the purchases from Chase debit and credit cards in 2015, and found 34% of 19-35-year-old spending was designated to travel, dining, and entertainment, compared to 28% of 36-year-olds and older. And though they’ll cut back on some experiences to manage their budgets, website GOBankingRates found that when it comes to their beloved food, Millennials are quicker to say “you only live once:” 55% say they still spend money on food and drinks, even if their funds are low. According to a Michelin survey, diners 18-34-years-old will spend more than other age group for special occasion dining: up to $282 compared to the survey average of $203. Some are also prioritizing food over products: Ypulse’s research found that 54% of 25-29-year-olds, and 57% of 30-33-year-olds, would rather spend money on dinner at a new restaurant than a new outfit.

In a 2016 monthly survey, we explored their current dining out behavior, which we’re outlining here in four charts, starting with what kind of food they’re going out to eat most: 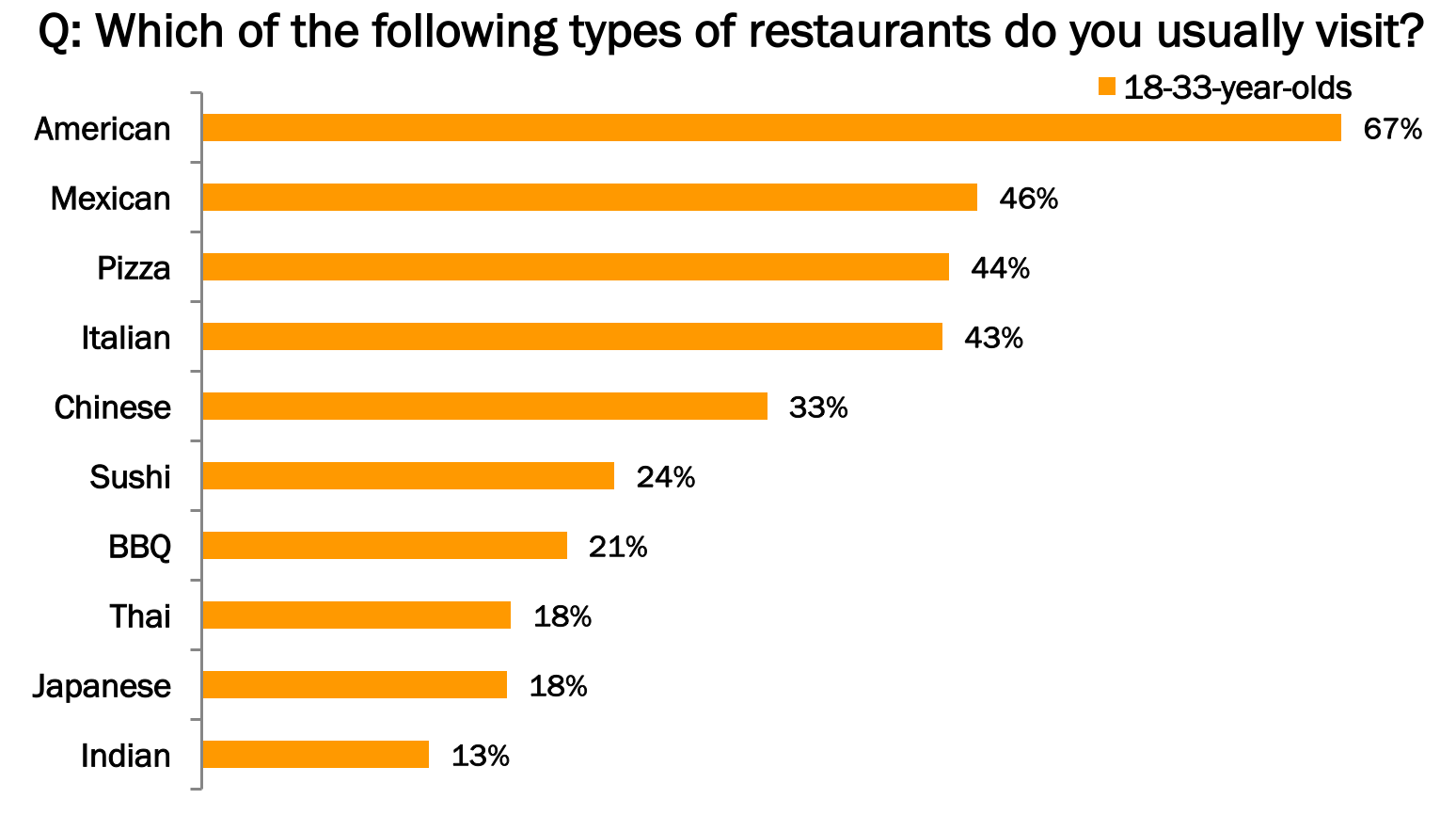 But overall, the desire for global foods is a priority for Millennials, when compared to other generations.  According to a Harris poll, over eight in ten 18-34-year-olds say they love exposure to different cultures, and about 32% say that purchasing and consuming foods with “multicultural flavors” is very important, compared to 27% of 35-44-year-olds and 45-54-year-olds.

When we look at the cuisines they’re seeking out in restaurants versus ordering out, there are clear differences: 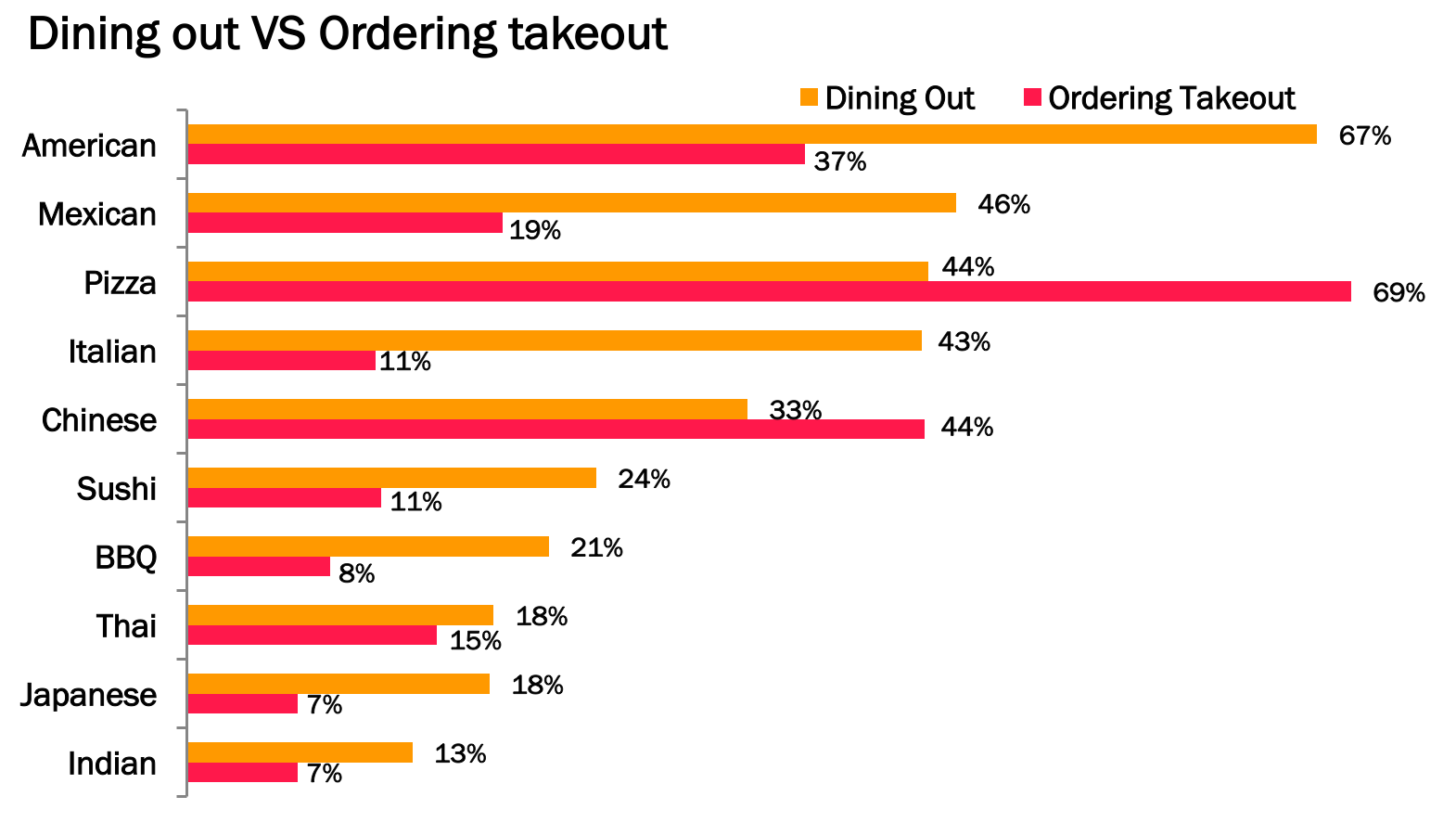 While American-cuisine tops the list for dining out, pizza is the king of takeout, signifying that 18-33-year-olds are seeking out not just a different experience, but different meals altogether when they’re going out to eat. Mexican, Italian, sushi, BBQ, and Japanese were all cuisines far more likely to be sought out of home than ordered in.

We also asked young consumers what kind of restaurants they are visiting: 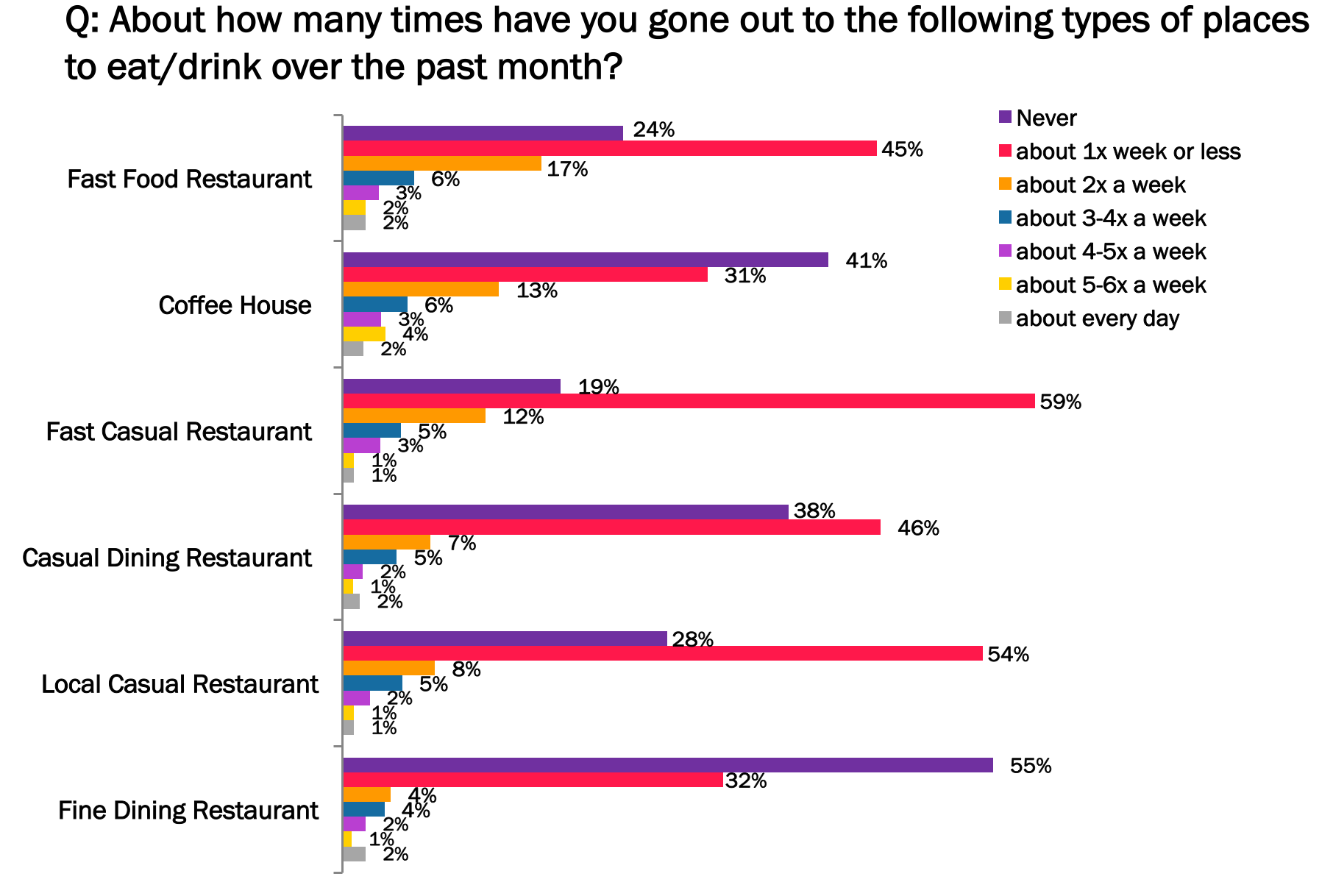 Zooming out beyond a month, we asked young consumers to tell us if they were going to these types of restaurants more, less, or the same amount as they were the previous year: 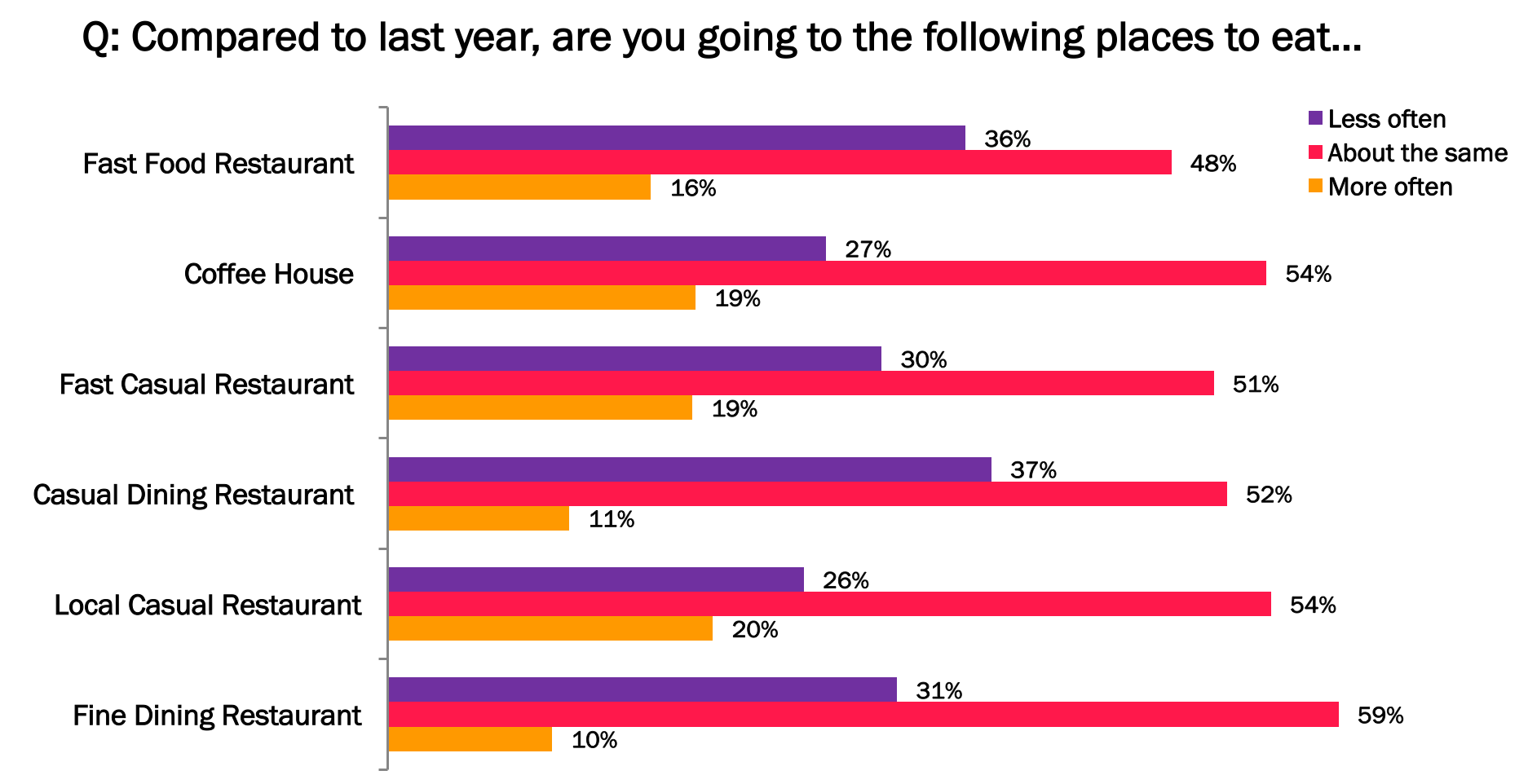 The casual dining and fast food industries are the two types of restaurants that may be in danger, with 37% and 36% of 18-33-year-olds reporting visiting them less respectively. Of course, many fast food chains and fast casual chains are making major changes—from renovations to menu alterations—to attract these young, influential diners.