Millennials & Teens Sound Off: The 15 Kinds of Entertainment They Most Enjoy We asked 1000 13-33-year-olds to tell us, of all the things they spend money on for entertainment, what do they enjoy the most?

We know that Millennials and teens have some disruptive entertainment preferences. As we outlined last week, they’re more likely to pay for an online streaming service than they are for cable, they refuse to pay for news, and more are willing to pay for a music subscription than an actual CD or MP3. At the same time, they are still embracing some more traditional entertainment forms. But even though their entertainment behavior might cause the industry headaches, there is no question that they are passionate about entertainment. Our recent monthly survey included a tracker of their entertainment spending, and we got the full scoop on what’s making their monthly budget cuts to entertain them inside and outside the home.

We found that internet access is the number one entertainment category that 13-33-year-olds are spending on inside the home each month, while movie tickets tops the list of outside the home spending. Six in ten older Millennials are spending monthly on an online video service like Netflix or Hulu, compared to about four in ten who are paying for cable. Teens are more likely to spend on video games monthly than the older group, while 18-33-year-olds are more likely to spend on books, travel, music streaming, concerts, recorded music, magazines, and festivals.

But we also wanted to know, of all those things they’re spending on, what do they love the most? So we asked them to tell us, “Of all the things that you spend money of for entertainment inside of your home or outside your home, what do you enjoy the most and why?”* Here are their top 15 answers ranking the kinds of entertainment they most enjoy:

*These were open-end response questions to allow us to capture the full range of Millennials’ entertainment preferences. As with any qualitative question, the responses include those that are top of mind, and those that are actually most enjoyed. The top 15 list is ordered according to number of responses received, and alphabetically when ties occurred. 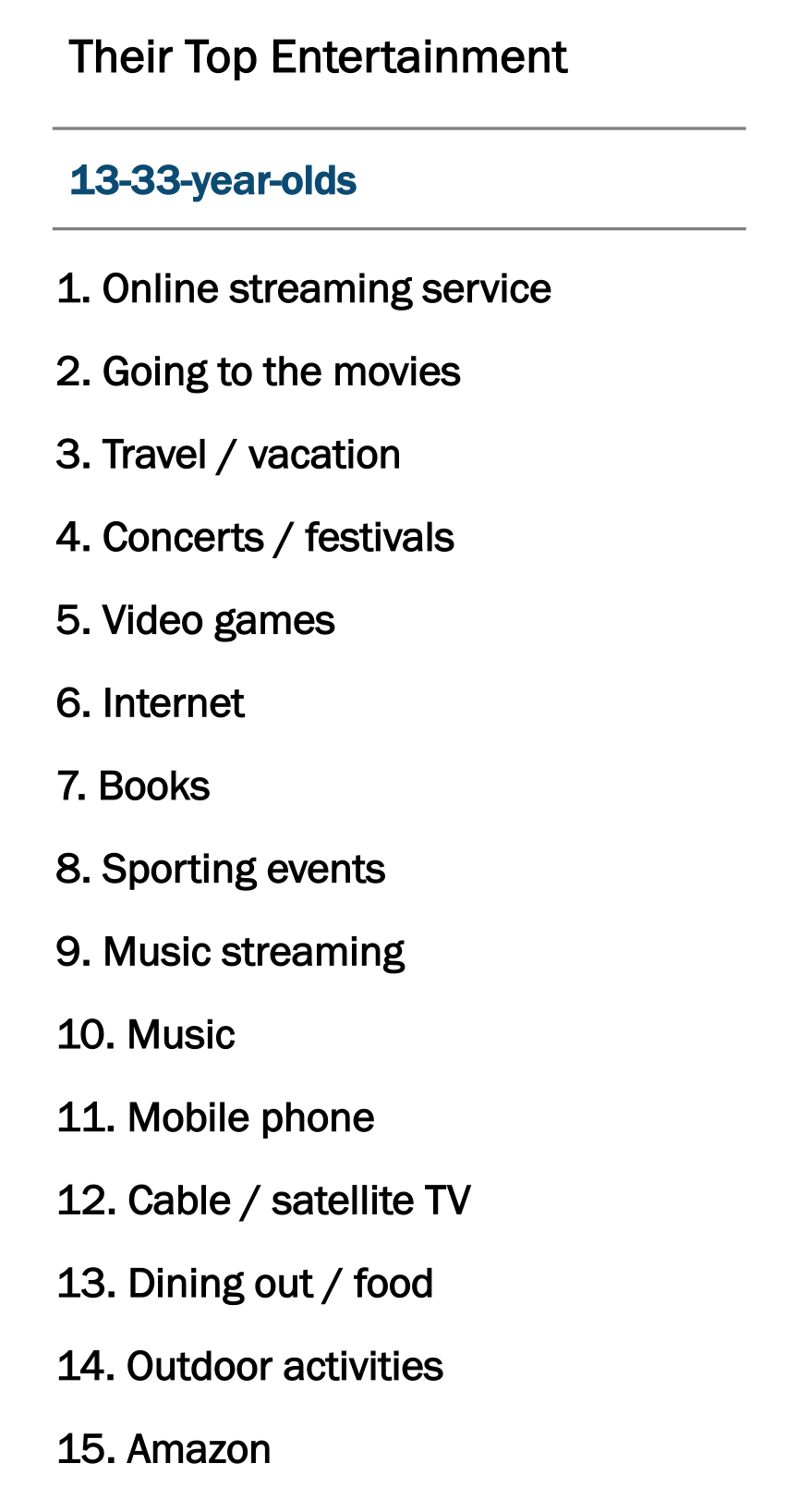 It is truly the era of streaming services. Not only are digital video services like Netflix and Hulu Plus more likely to be a part of young consumers’ monthly entertainment budgets than cable, with 56% of 13-33-year-olds reporting they spend money on an online video subscription in an average month, online streaming services are also at the top of their favorite entertainment list. While some respondents spoke of online streaming in general, we should point out that enough mentioned Netflix specifically that the service could have made the top 10 list on its own. We explored young consumers’ relationship with online streaming in recent trend The Binge Effect, and found their love of online entertainment streaming is impacting them in a big way. According to that research, 95% of 13-33-year-olds binge watch, and 54% are binge watching multiple times each month. They’re devoting an immense amount of time to consuming entertainment in single sittings, and their television preferences have been altered drastically. Their binging behavior is also distracting them from other things, changing their views on marketing, and shifting their frame of reference as they access content they might never have seen before. Respondents talked about the convenience and low price of streaming services, as well as the amount of content it gives them access to as major reasons they love it. They turn to it when bored, to bond with family and friends, or when they’re tense. One 23-year-old female said of Netflix and Hulu, “It is a stress reliever and gives me something to look forward to.”

While some might be surprised to see going to the movies at number two on the list, our entertainment spending survey found that seeing movies on the big screen is still a draw for the generation, with six in ten 13-33-year-olds reporting they spend money on movie tickets in an average month. Travel / vacation’s high ranking should come as no surprise, as Millennials and teens continue to live up to their wanderlust reputations.

There are some differences when we look at the top entertainment picks for males, females, teens and older Millennials: 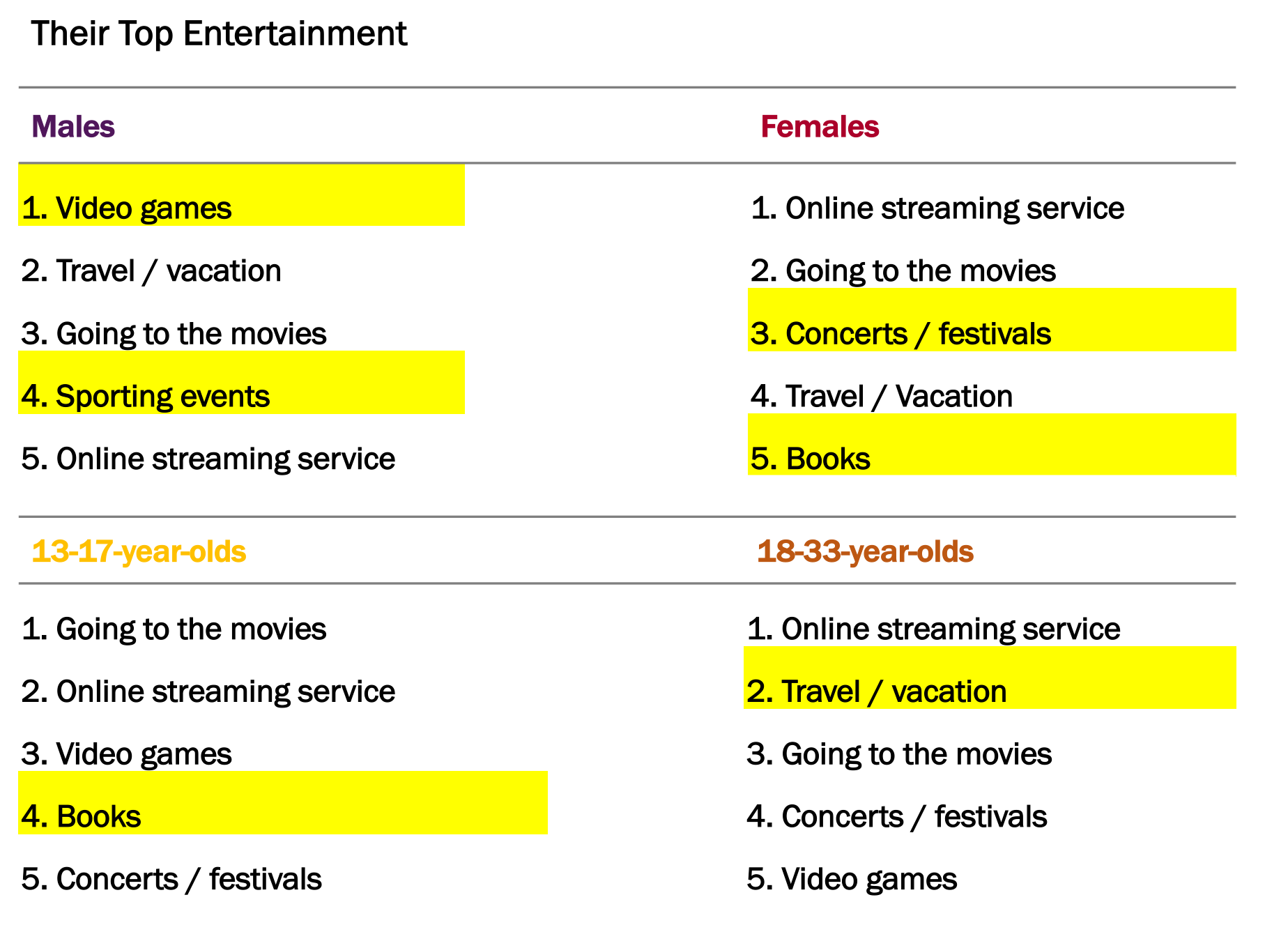 While video games and sporting events made the top five for males 13-33-years-old, their female counterparts prefer books and concerts / festivals. Interestingly, online streaming services rank higher among females than males, but they did come in the top five for both groups.

Teens and older Millennials have relatively similar entertainment rankings, but 18-33-year-olds are more likely to say travel is something they enjoy the most. The reason for this is no mystery: travel for independent young consumers means adventures with their friends or partners, but for teens there is little choice and usually means a family vacation.