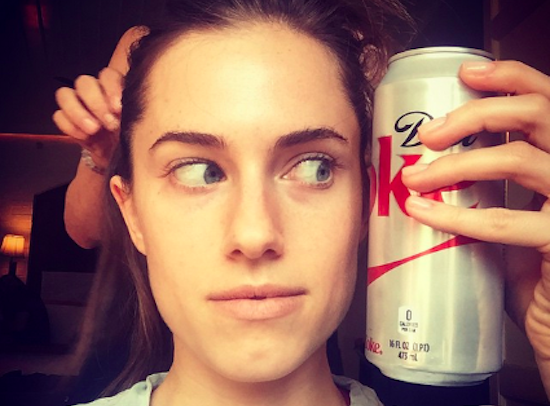 What do Millennials and teens think of marketing today, and what ads make them want to buy? We asked 1000 13-33-year-olds all about their marketing preferences…

Every day, we study the marketing being created to reach Millennials and teens, from Snapchat filters to hyper-personalized packaging. But while watching the trends in the industry is one important piece of understanding how to engage with young consumers, there’s nothing quite like hearing what they think of it all themselves. In a recent Ypulse monthly survey and Topline Report, we explored Millennials and teens’ marketing attitudes and preferences, and uncovered a lot of insights. Here are five things we learned: 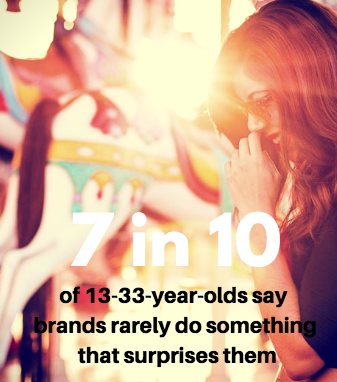 1. Seven in ten say brands rarely do something that surprises them.

We often say that young consumers today are incredibly marketing-savvy, and this stat says it loud and clear. The generation that has seen it all says they’re rarely surprised by brands these days. Not only have they been exposed to more marketing tactics than any generation before them, they’re also reacting in some ways to the Big Data world they live in. “If you like this, you may like this” has become a norm, and young consumers are very accustomed to their data being used by brands to make suggestions, surface relevant ads, and give them what they want. While they love the convenience of these solutions (and the majority take advantage of them) prediction has made chance discovery a rarity. Brands that think outside the big data box with marketing and product experiences that shake up young consumers’ every day are getting noticed. 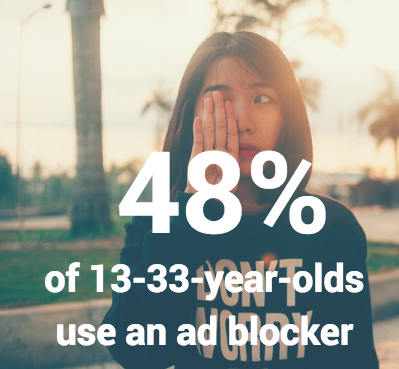 What may be marketers’ worst fear is true: 48% of 13-33-year-olds say they use an ad-blocker. Older Millennials are even more likely to block ads, with 53% of 21-33-year-olds saying they use a blocker. It’s hardly a surprise then that when we ask what types of advertising they usually ignore or avoid, 62% say banner ads, and 70% say mobile in-app ads. Forget getting them to remember your ad—just getting them to see it is harder than ever. The disconnect between young consumers and traditional digital advertising is the reason we’re seeing the rise of new platforms and media to reach them—and why brand are so eager to experiment with social media activations like Snapchat filters, which are proving far more engaging than those blocked banners. 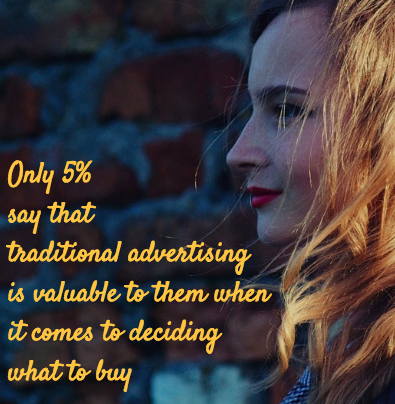 3. Only 5% say that traditional advertising is valuable to them when it comes to deciding what to buy.

After reading the first two items on this list, number three should hardly come as a surprise: only 5% of 13-33-year-olds think that traditional advertising (e.g. TV ads, billboards, magazine ads) are most valuable to you when it comes to deciding what products to buy. But it’s not as dire as it sounds—we were asking them about the MOST valuable content, so traditional advertising clearly still serves a purpose. The bigger takeaway here is that three in ten Millennials and teens named online reviews and recommendations as the most valuable source of information when making purchasing decisions, and three in ten named recommendations from friends or family. In other words, your commercial might influence them, but it’s other consumers that actually make them click “Buy.” 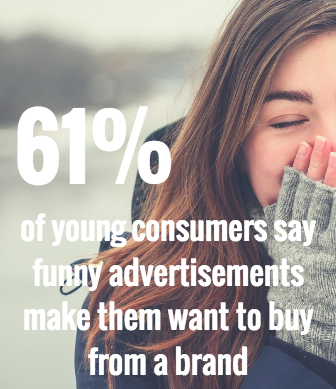 4. 61% say funny advertisements make them want to buy from a brand.

Tissue box marketing has its place, but according to Millennials and teens, the advertisements that make them laugh are the ones that most make them want to buy from a brand, followed by those that have a positive message. We saw evidence of this sentiment when we asked young consumers to tell us what brand has the best ads. Doritos and Budweiser were neck in neck for the top two spots on the list, and both brands received far more mentions than any other in the top 10. Doritos edged out Budweiser by a slim margin, and “funny” was one of the most common words used by those who named the brand. Respondents cited Dorito’s commercials’ humor, and it seems that using more out-of-the-box comedy has garnered the brand fans. Many explained they are unexpected, creative, and memorable—one 27-year-old male said, “They’re bizarre and usually go viral because they’re non-traditional.” 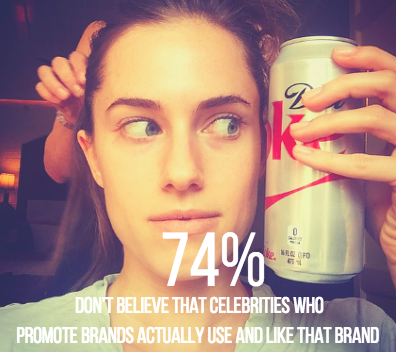 5. Over seven in ten don’t believe that celebrities who promote brands actually use and like that brand.

Celebrity endorsements beware. Millennials and teens have grown up in the Age of Not Believing, and their tendency to question everything has made them skeptical of celebrity promotions. Last year, Cotton Inc. actually ditched celebrity endorsements to appeal to authenticity-loving Millennials. The group had historically relied on celebrity faces in marketing. However, now their marketing savvy, younger consumers are less swayed by famous figures in commercials. The questioning of traditional celebrity endorsements has also paved the way for the rise of the influencer economy, as Millennials are more likely to believe the online creators that they feel are their friends.