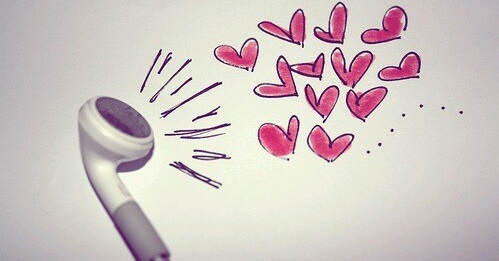 At the end of a year filled with music industry shakeups, we found out which music streaming services are winning with young consumers…

Music streaming is arguably the biggest disruptor of the music industry since the mp3, and Millennials are at the forefront of the revolution. Since we wrote at the beginning of 2015 that streaming is a contentious space thanks to issues with artist compensation and the perceived threat that streaming poses to album sales, T.Swift has feuded with Spotify, Jay Z launched (and then forgot?) Tidal, and Adele decided to keep all her new hits songs off of the streaming waves. There is little doubt that there will continue to be contention as the space evolves.

But at the same time, Millennials and teens continue to bolster the growth of streaming services. In September, music sales numbers for 2015 showed that streaming has seen huge gains, growing 23.3% and generating $1.03 billion. Paid subscription models are also up in revenue (even without the inclusion of the new Apple Music in that data.) So, at the end of a year full of streaming music drama, we found out exactly what services are winning with young consumers right now. In a recent Ypulse monthly service, we got the data on what services 13-33-year-olds have active accounts on, and which is their favorite. Here’s the overall ranking of their streaming service use: 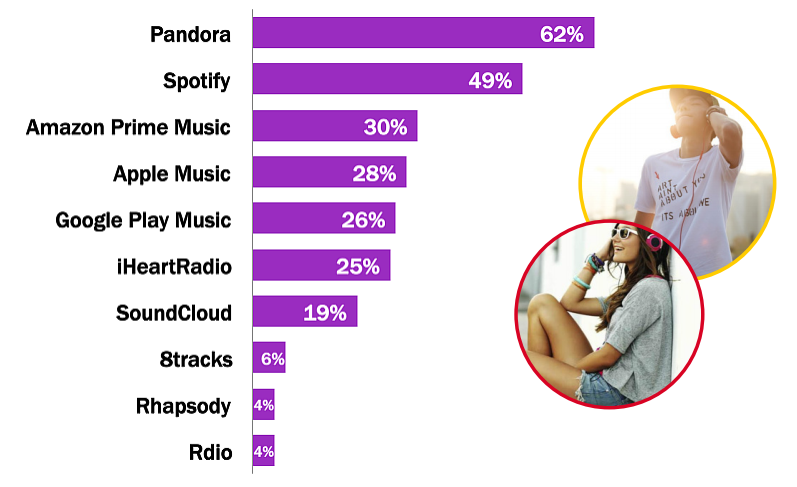 Pandora leads the streaming pack, with more than half of young consumers saying they currently have an active account on the platform. But Spotify is close behind. Interestingly, the two sites have very different approaches when targeting Millennials. While Spotify entices with personalized perks like weekly playlists, Pandora is investing in live events, using digital listening trends to plan concerts and inviting the users they know will love the lineup.

A few months after Apple Music’s release, and shortly after the service’s free trial time came to an end, roughly one in four Millennials tell us they have an active account. There has been much speculation this year around whether young listeners will be willing to pay for Apple’s new music service. According to a recent survey, 62% of Apple Music users under 35-years-old said they had cancelled their subscription, while 67% of those over 35 say they have become paying subscribers. Young music listeners are looking for free content and might just be less willing to pay anyone for music.

We also looked at the music streaming service results to compare teens’ use to older Millennials: 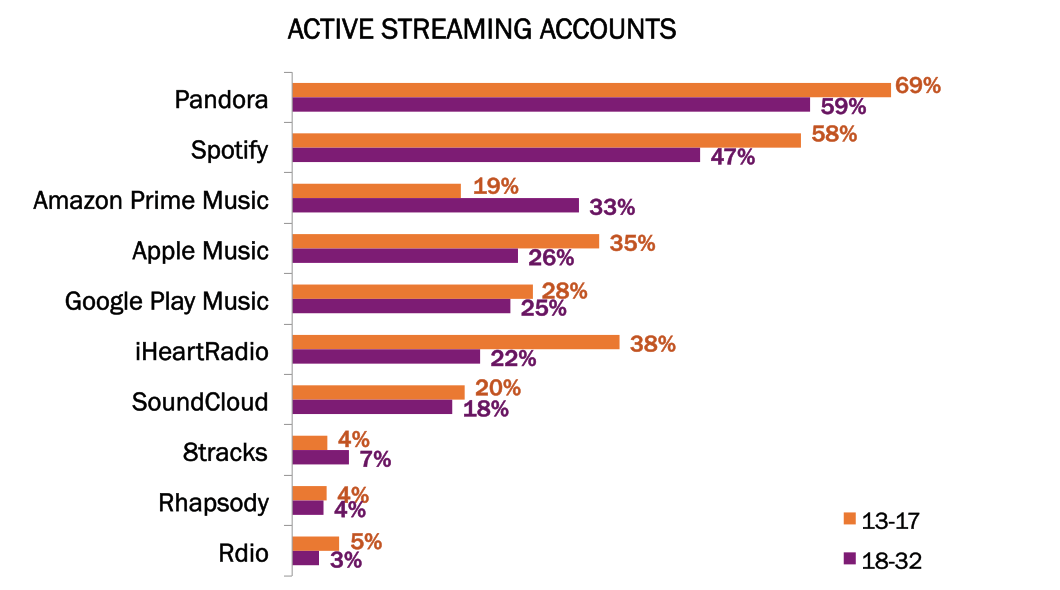 Though Pandora and Spotify are the top services for both age groups, 13-17-year-olds are more likely than 18-33-year-olds to use both. Teens’ love of Spotify could be helping it compete with top dog Pandora. A survey comparing the app usage of the graduating class of 2015 to last year’s grads found that this year’s teens say they are using Spotify 78% more than last years’. Meanwhile, Pandora use dropped 11%, perhaps showing the increased streaming competition is impacting them. Meanwhile, older Millennials are more likely to use Amazon Prime Music. We can assume that cost is a major factor in the differences here.

Another reason Pandora might need to step up their game? We also asked Millennials which of the streaming services is their favorite:

Here, Spotify edged out the competition. We pointed out earlier this year that to stand out in the hyper-competitive world of streaming services, Spotify has created a non-stop cycle of marketing to provide new features and branded exclusives to young users. It looks like it could be working…