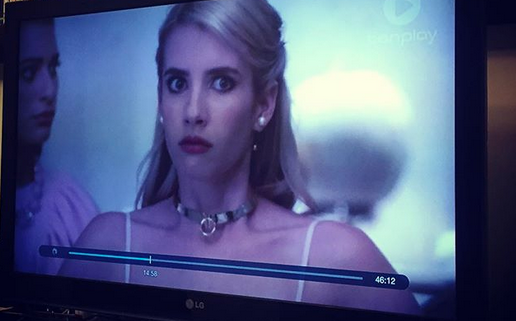 We’ve crunched the numbers to find what new shows are marketers’ best bets for reaching Millennials.

Millennials are watching a ton of entertainment content, and though they might not be tuning into live-TV the way their parents did, they’re passionate about television content. So what’s are the new shows that marketers should be using to reach them? We’ve crunched the numbers.

As we enter the third week of new fall programming, a clearer picture of what Millennials are watching has emerged and there’s a high level of correlation between awareness and self-stated viewership. The Muppets, Quantico, and Heroes Reborn are seeing solid traction in word-of-mouth recommendation, as evidenced by having higher viewing intent than viewing.

With four out of five new series failing within their first year, buying advertising time within an inaugural season is a guessing game. With 34 new series slotted into the 2015 fall lineup, a plethora of new shows could translate into thin viewership among those that can’t break through the clutter.

We’ve been pleasantly surprised at how many advertisers have made Millennial viewers a priority and how many new series have declared Millennials to be their target audience. Of course, it makes sense that Millennials are getting more and more attention—a third of the workforce is now comprised of Millennials and more than three quarters of newborns are born to Millennial moms. From a generational perspective, it’s prime time for those who are looking to make an impression on the largest generation in America history.

That said, are there any opportunities within the new fall line-up? Let’s rate the cost of these coveted Millennial eyeballs based on self-stated viewership plus intent to view.

While The Muppets, Fear the Walking Dead, and Scream Queens are leading in terms of Millennial viewers, they are also expensive for advertisers. According to AdAge, 30 seconds during a Muppets episode will set you back $131,313, while Scream Queens will cost you $147,808. It is rumored that AMC sold spots for Fear the Walking Dead for $270,000 during up-fronts and is charging $325,000 for a spot in the scatter market. That’s frightening, making The Muppets look like a bargain.

If you believe what Millennials have told us, we’ve got some deals for you. There are a number of value opportunities in this fall’s lineup: shows that will cost a lot less than the top three, starting with the CW’s Crazy Ex-Girlfriend. While the price of $23,159 may have changed due to positive reviews, you can capture a little more than 8% of Millennial viewers at an affordable $2,51 per thousand (assuming Millennials will actually watch your ad while watching TV). 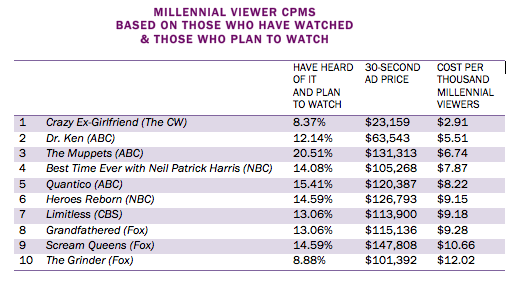 Skeptical that stated intent will translate into actual viewing?  We hear you…

Let’s recalculate our cost per thousand viewers based on self-reported viewership only, removing intent and assuming that our prices for 30-second spots remain accurate. While Crazy Ex-Girlfriend remains our value leader, The Muppets, and Scream Queens show what you can get for betting on a proven performer rather than risking your marketing dollars on a potential winner with long odds. 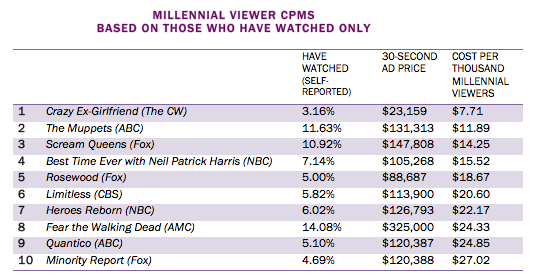 Regardless of where you spend your hard-earned marketing dollars, the television remains Millennials’ top screen and knowing what shows they’re invested in remains an essential way to reach them as an audience.