Millennials & Teens Sound Off: What Would Make Them Eat At McDonald’s 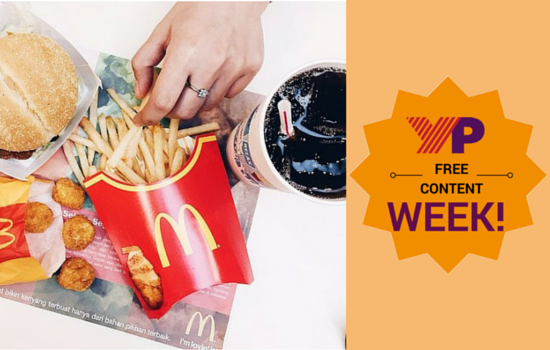 This week we’re counting down our five most popular articles of 2015 so far, and giving all of our readers access to one each day. Here is the 5th most clicked, originally published June 8th, 2015- we hope you enjoy!

WE ASKED 1000 13-32-YEAR-OLDS TO TELL US WHAT WOULD MAKE THEM EAT AT MCDONALD’S MORE. HERE ARE THEIR BIGGEST ISSUES WITH THE BRAND…

There have been endless articles, news stories, and think pieces about McDonald’s Millennial problem, either looking at the efforts the brand is trying to make to win over young consumers, or analyzing why the next generation of consumers is eschewing the iconic golden arches. After a fair amount of time observing and tracking this brand story, we decided to go straight to the source, and just ask Millennials and teens what it would take to get them to eat at McDonald’s more.

In our April monthly survey of 13-32-year-olds, we asked, “What would make you eat more often at McDonald’s? What would they have to change or improve?” and let them sound off. We’ve culled through their very honest answers to create a list of their biggest problems with the McDonald’s brand, food, and experience, and tell you what they would change, in their words.

We’ll start by saying that not all of the responses were negative. Contrary to many reports, some Millennials still like McDonald’s. One 29-year-old male told us, “McDonald’s is a great brand, is using good quality ingredients. It serves variety of food on reasonable cost. I like its taste and flavor.” But unsurprisingly, these fans were not the majority. Here are five of the biggest complaints that McDonald’s would have to address to get Millennials and teens to eat there more often, and they have nothing to do with marketing, technology, or home delivery.

McDonald’s reputation has indeed soured in the eyes of many Millenials and teens. A 20-year-old male said of the brand, “McDonald’s has such a disgusting stigma attached to it. Even if they had something that tasted great and seemed healthy, I would be getting it from McDonald’s…ew. I know it’s not fair, but that’s just the way I’ve thought of McDonald’s for years.” Ouch. A 26-year-old female confessed, “For me, McDonald’s is inextricably linked with entirely manufactured, processed foods and obesity. There is no way for me to feel good about eating there.”

But usually there were specific grievances that these young consumers let us know were major problems for them. Issues with service and the chain’s cleanliness and ambiance were brought up by many. A 15-year-old female told us, “I don’t like the atmosphere there. It would need to be cleaner, brighter, and calmer.” A 22-year-old male declared, “The environment of the restaurant still feels like the typical fast food restaurant.  Make it feel less like I’m eating at McDonald’s and I’d go.”

However, product quality was one of the top-mentioned issues, and the word “quality” itself was used 185 times in their open-ended responses. More than a few talked about the way that McDonald’s food made them feel (sick) and the sub-par taste. Here’s a sample of their thoughts: 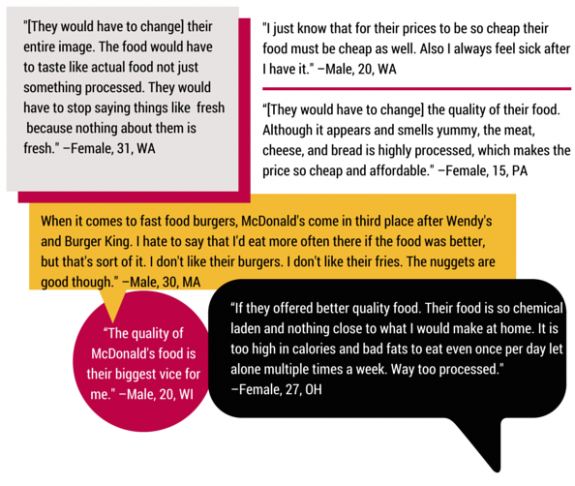 The level of quality and amount of food that they get at McDonald’s compared to the price they’re paying is also an issue. One 18-year-old female told us, “I just get more food at Chipotle and it lasts me longer,” while a 21-year-old male said, “They would have to put something with more substance on their dollar menu. I know this is hard because McDonald’s is working at such thin margins anyways, but if they want to rival something like Chipotle, they need to be able to offer more volume for the price they charge.” (And yes, comparisons to Chipotle were plentiful, and kept on coming.)

Of course, many of them got far more specific than general quality. As is somewhat evident above, to many, that quality comes from better ingredients. Getting rid of artificial, processed products and antibiotics, going non-GMO, and using organic, local items were frequent requests. Their reputation for wanting more natural, “real,” menus is not unfounded: 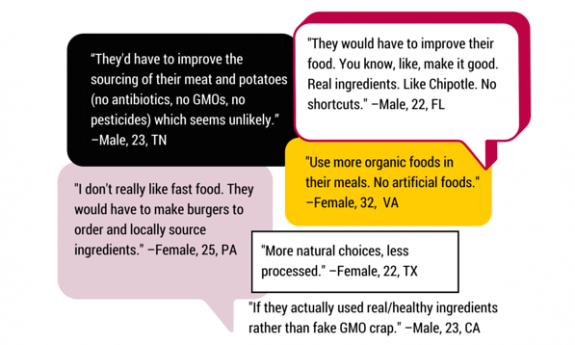 Wanting transparency around the ingredients and the food preparation was mentioned by many. One 23-year-old male said he would eat there more “if McDonald’s became transparent and used ingredients that people trusted and not preservatives like they claim aren’t harmful. [There’s] still [a] perception that it’s dangerous.”

Their concern for their health was another expected and fairly common response. While some said they only wished McDonald’s food felt more healthy, many took issue with the high calorie counts on the menu, and the toll it might take on their health. For some, fast food has been eliminated from their diets, and even if they liked McDonald’s it’s not a part of their lifestyle. Regardless of the specifics, health concerns were a major theme: 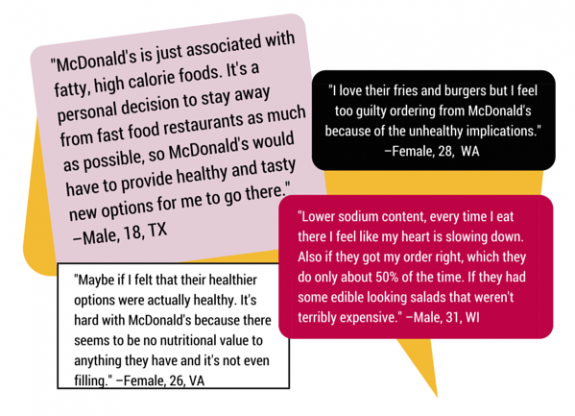 Others don’t need the food to be actually good for them, but would be happy if it were just not as bad. According to a 22-year-old female, she would eat at McDonald’s more “if the food were in that nice middle line of healthy and unhealthy like Chipotle feels.”

Some responses from Millennials and teens did hint at a problem that McDonald’s won’t be able to fix with a new mascot, pared down menu, or even healthier, more organic ingredients: some of these young consumers just don’t want to eat burgers anymore. Several mentioned craving burritos over burgers, or liking the “cultural” food that Chipotle provided better. A 30-year-old female told us, “Nothing would make me eat more often at McDonald’s due to the fact that I prefer Mexican food over American food.” Another 30-year-old male’s response to the question “What would make you eat more often at McDonald’s?” was simply, “If they served Chipotle.” They weren’t alone in their preferences for burritos over burgers: 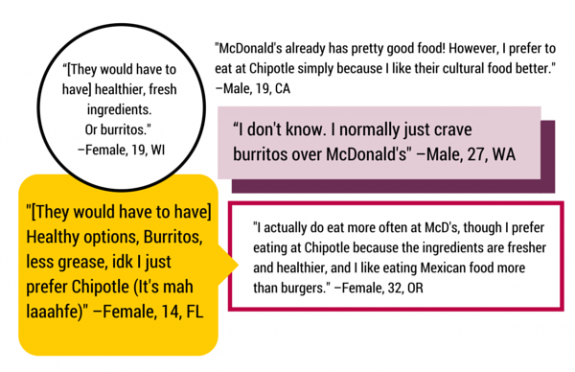 Some of those who took issue with McDonald’s overall menu indicated their issue with burgers is one of boredom. One 22-year-old male said, “They would have to get healthier options and get some new menu items. I’ve eaten chicken nuggets and french fries from there forever, so I’m a little tired of it.” A 14-year-old female was as honest about her menu-boredom, saying “To make me eat more McDonald’s they would have to change their flavors, I feel as if everything tastes the same and I don’t enjoy it as I did when I was younger.” Burger boredom and a desire for more variety weren’t uncommon: 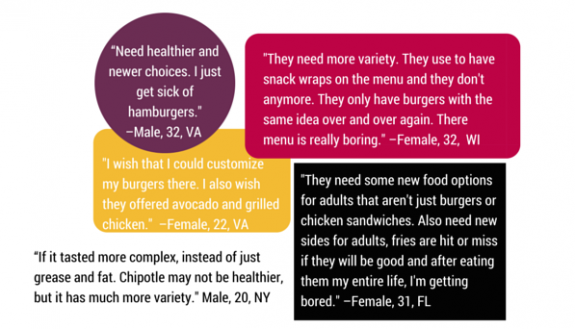 Wanting customization was a variation on this theme. A 22-year-old female told us, “I wish that I could customize my burgers there. I also wish they offered avocado and grilled chicken.” One 28-year-old male succintly summarized several of our themes, saying he would eat at McDonald’s more if they provided, “Lower sodium content. More customizable options. Offer spicy foods.”