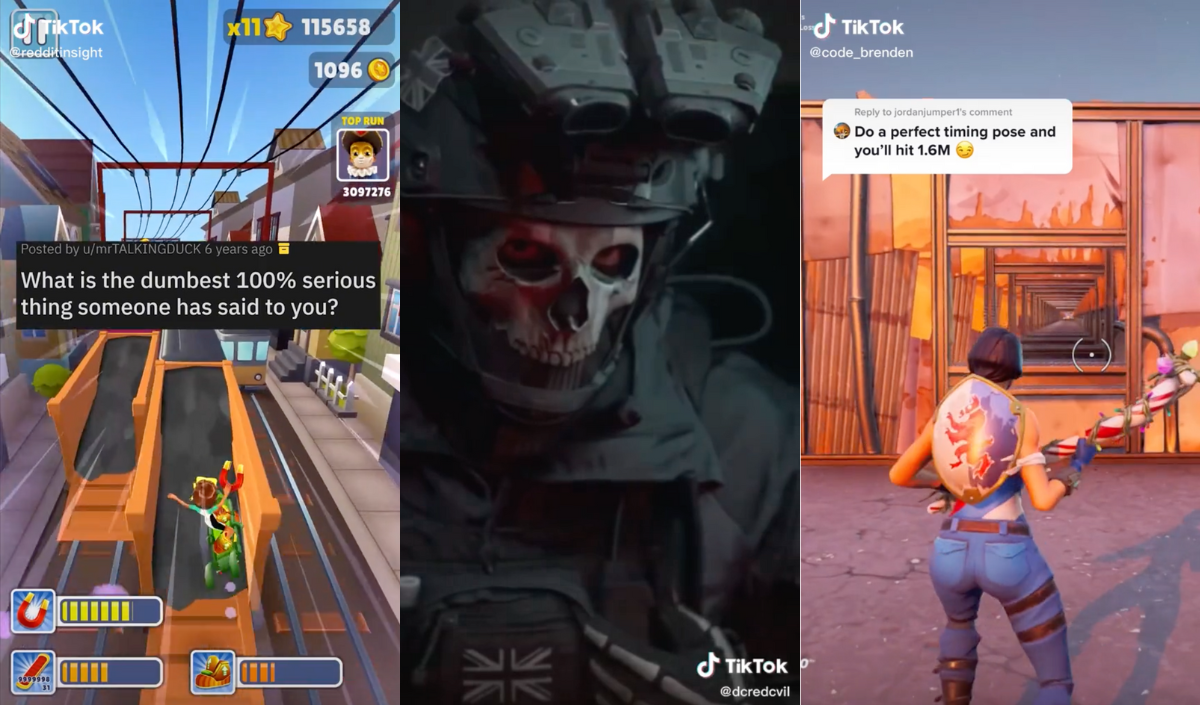 YPulse data shows 95% of Gen Z and Millennials play video games in some capacity—and in the huge market of games, there’s one for every one of them. And a majority of Millennial parents say their kids play video games, so the next generation is already growing up with gaming as a part of their media diet. But while the most frequent gamers spend an average of five to seven hours a week playing video games, those hours are mainly divided up by a few favorite games. With so many young players, marketing in gaming is bigger than ever and growing by the day, and it’s important for all brands to know which video games are their favorites.

In YPulse’s recent Gaming report, we ask 13-39-year-olds what their favorite video game or mobile game is, as an open-ended question, they named more than 300 games—and Millennial parents named more when we ask what their kids’ favorite game is. As the 10 favorite video games of each of these young generations, these games clearly have powerful followings going into 2023: 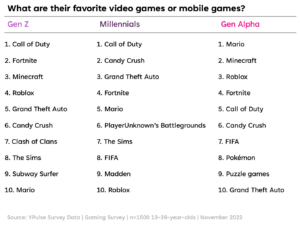 Of all video games and mobile games, Call of Duty comes out on top for both Gen Z and Millennials—and overall for a third year in a row. It ranked in second in 2019, but is clearly a lasting favorite for these gens. This year the brand had a record launch for Call of Duty: Modern Warfare II, selling $1 billion in just 10 days, and racking up 200 million hours played in that same time. While their audience is huge for the long-time franchise, dedicated Gen Z and Millennials certainly have an impact on video game success these days, and their favoritism for the game shows. Viral trends even emerged with the game: over on TikTok, players made fan edits of the character Ghost, with the hashtag #SimonGhostRiley gaining 480M views. It’s no secret these days that popularity on TikTok can drive sales for just about any brand, but it’s also a reflection of the brands and products that young people already love.

Gen Z are more into metaverse games than Millennials

Of Gen Z’s top favorite games this year, three of their top five are key metaverse platforms: Fortnite, Minecraft, and Roblox (in that order). While Millennials also rank Fortnite in their top five, Roblox and Minecraft are more favored by the younger gen. This is not to say that Millennials aren’t engaging in virtual worlds, just that Gen Z is doing so on a different level; YPulse’s Metaverse trend report shows Gen Z love virtual world games as a space to hang out with friends, express themselves, and some even enjoy them more than their IRL lives. Their love for these games is what has made metaverse marketing so important, and 59% of young people agree brands need to interact with virtual worlds to stay relevant.

These games are especially important for brands to know and interact with given that these are also three of the top five games for the next generation of gamers (oh, who are we kidding, the current generation of gamers): the kids of Millennial parents. The majority of Millennials’ kids are young Gen Z, but with 35% being 4-years-old or younger, they’re also the parents of Gen Alpha—meaning these games have a huge growing audience. Half of Millennial parents tell YPulse their children play virtual world games, and 47% of those players have become interested in a brand because they’ve seen it in a game.

Ninety percent of young people play mobile games; slightly more Gen Z (93%) than Millennials (88%), and 82% of Millennial parents’ children. And though Gen Z are more likely to be playing them, Millennials are the one with a mobile game in their top two. Candy Crush has an apparent huge staying power, as a top 10 game for all three generations. On Millennials’ list at number two, having been a popular game when they were young and getting their first smartphones—and now bringing them a sense of nostalgia with the ease of something to fill time. Nostalgia is a driving factor for other games, too, like the perpetually popular Mario franchise that makes each gen’s top 10. As recently as last month, brands have continued to tap these games: Prada launched a playable-ad mini game to Candy Crush’s 200 million users in promotion for their new Candy fragrance.

Gen Z are also fans of mobile games Subway Surfer and Clash of Clans. Subway Surfer has a unique popularity on TikTok: the official account for the game has 6.2M followers and a total 72.4M likes. And like other popular brands on the app, their content interacts with the trending filters and audios of the moment to catch their young audiences’ attention. But from other users, Subway Surfer is a popular pairing for long, story-telling videos; creators use screen recordings of the game as background to, most often, a robot voice reading a post from popular reddit threads. Gen Z loves mesmerizing, oddly satisfying video content of all kinds, so these videos pull in millions of viewers—most impressively: for more than a few seconds.