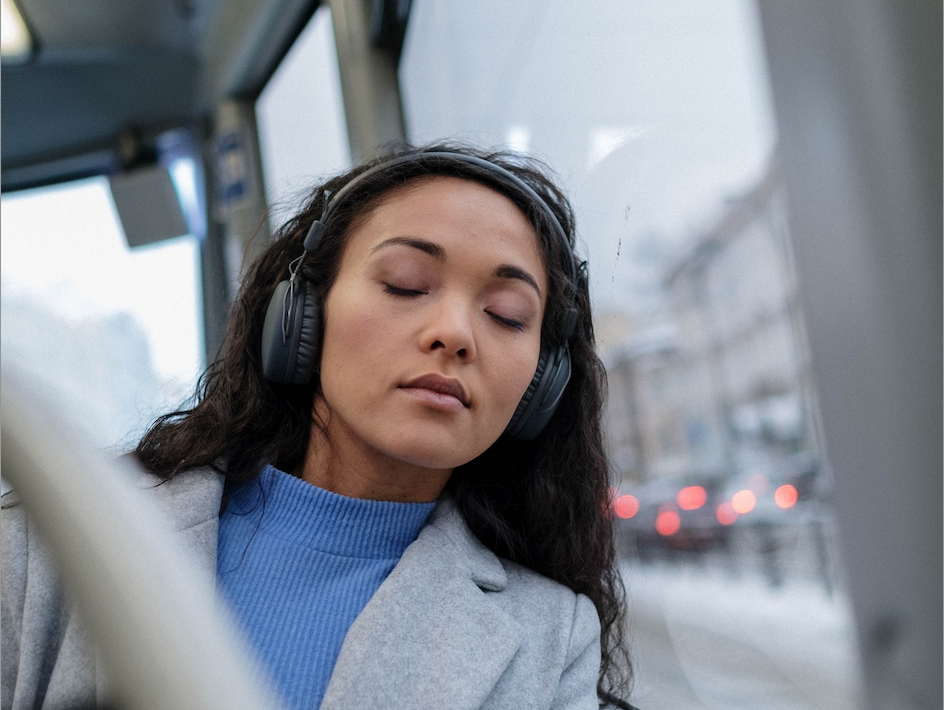 Music is not only entertainment, it’s also a way to maintain their mental health…

For young people, self-care goes beyond the typical bubble bath and scented candles; it can be anything that makes them feel good, including the perfect playlist. And they aren’t wrong—far from it in fact— according to research from Harvard Health Publishing, music therapy can create “significant improvements” that include decreasing anxiety, shifting moods, finding motivation, and increasing expression. So it’s no wonder that when YPulse asks Gen Z and Millennials about the way music affects their mood and mental health, the vast majority say they’re using it as a tool of self-care. In our Music report, we ask 13-39-year-olds how music is a part of their life, and these three stats shows it’s a huge part of their wellbeing: 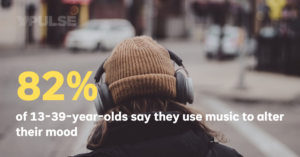 The vast majority (82%) of Gen Z and Millennials say they use music to alter their mood. Whether it’s getting hyped up, chilled out, or trying to focus, these gens are the masters at creating the perfect playlist vibe. For young people who use music streaming services, though, some music streaming platforms make playlists based on their feelings for them so they can easily access whatever vibe they’re looking for curated just for them. For instance, Spotify (which 48% use, making it the top music streaming service for young people) teamed up with YPulse to find out exactly how young people say music impacts their mood, and use that data to offer them music in exactly the way they want it—personalized and for all purposes.

YPulse’s Content Cure trend report also dives into how young people thoughtfully use media to alter their moods. Our data shows they’re intentional about what media they’re going to for which moods—whether matching or modifying it—but that overall, they say music has the most power to change their mood. Music / music videos are in the top two types of media young people say they consume to feel happier, be less overwhelmed, and tune out the world. 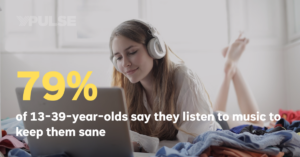 In addition to altering their mood overall, 79% of young people even say they listen to music to keep themselves sane. With so much going on in the world around them, a musical escape is sometimes exactly what they need. YPulse data also shows that during the thick of the pandemic, music was the number one thing Gen Z and Millennials said was like therapy to them. In fact, YPulse’s Religion and Spirituality report shows young people say musicians are in the top people they look to for guidance and support outside their family and friends—and they’re number one for Gen Z.

As much as listening itself is a therapeutic experience, we also know young people feel a great sense of community in the music they listen to and from other fans of their favorite artists. These communities especially thrive online: YPulse’s Clicking on Community trend report shows one third of Gen Z and Millennials say they’re part of a fandom, and 34% of those say it centers around a musician / band. And our data shows the number one thing young people get from the communities they’re part of is an escape from stress. Because social media is the number one place young people listen to and discover new music, the supportive communities that center around music are constantly growing. 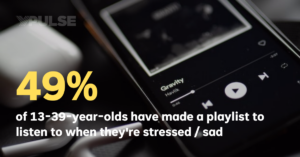 YPulse data shows music is the number one thing young people use to express themselves (57%). It’s no wonder then that roughly half of young people have made a playlist to listen to when they’re stressed / sad, and 28% more are interested in doing so. Our Content Cure research shows 65% of young people say they listen to music when they feel unhappy— but it’s important to note that they’re not just curating lists of upbeat tunes as a direct antidote to sadness. Their emotional relationship with media can be more complex than that, and often young people will turn to media that will help amplify their feelings to help work through them. A study from wild Nonfiction reports that “Americans use music playlists to purposely feel moods like sadness, frustration, loss, anger and regret….[and] 44% of Americans have listened to music purposely to “feel dark emotions.”