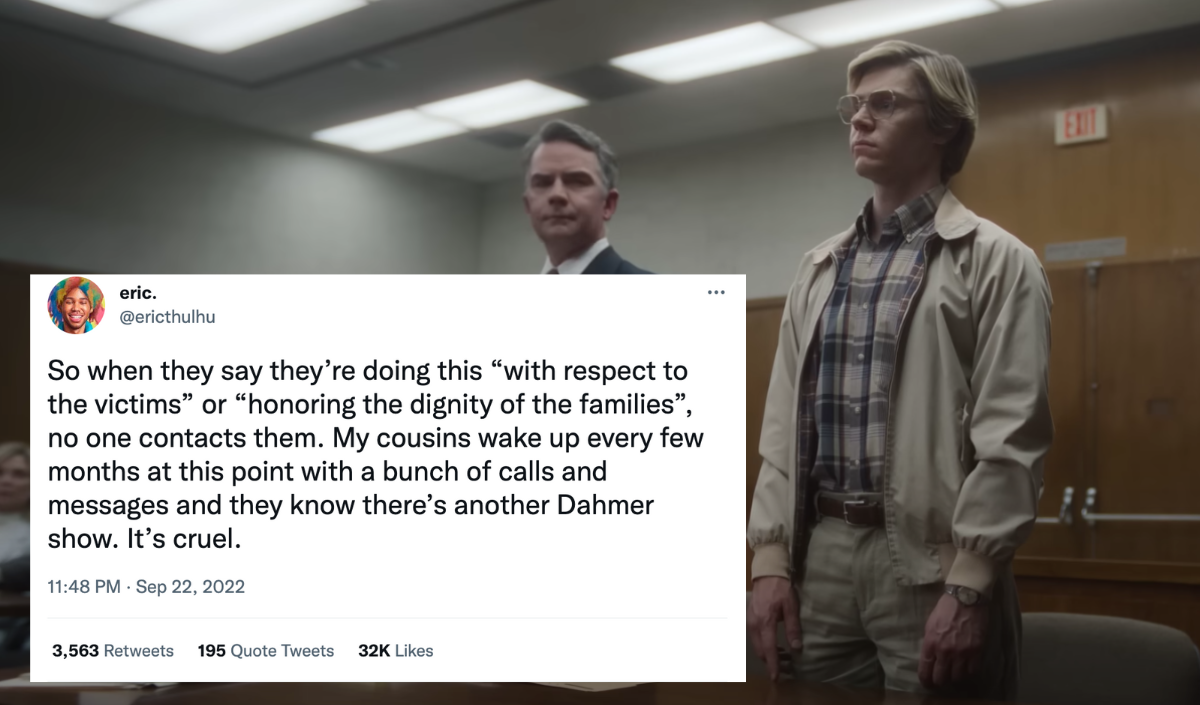 While being a true crime fan is not exclusive to Gen Z and Millennials, these gens have certainly bought into this genre of entertainment. YPulse’s Media Consumption Monitor shows 25% of young people watch true crime video content weekly or more often, and it’s the third most popular category of podcasts they listen to. But online, discourse has been circulating about whether this entertainment is exactly ethical.

The debate has existed online for a while now, but it was recently reignited by the release of Netflix’s Dahmer – Monster: The Jeffrey Dahmer Story. The show has been uber successful, now ranking alongside Stranger Things 4 and Squid Game for most streaming hours ever on the platform—and YPulse data shows it’s young consumers’ eighth favorite currently airing show. But many online were concerned that the show, starring Millennial favorite Evan Peters as Dahmer, romanticized or sensationalized the true crimes without concern for the families of victims portrayed in the series.

Others, including Netflix themselves, argue that even reenactments give “victims a voice.” But when the families of said victims come forward to say they feel “retraumatized” by the series and others like it, empathetic young viewers are confronted with whether or not they should engage with this media. In our recent TV and Entertainment report, we specifically asked 13-39-year-olds about this moral dilemma, and this is how many say they’re starting to question their true crime watching habits: 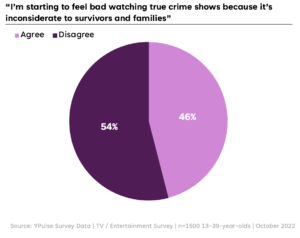 Dahmer creator Ryan Murphy, known for his dark, but fictional, series (many also starring Evan Peters has an evil heartthrob) claims 20 families were contacted and “not a single person” responded. But family members of victims portrayed in the show have said they were not contacted about the new series. Rita Isbell, sister of portrayed victim Errol Lindsey, said it felt “harsh and careless” that Netflix alone profits from the series, not the victims’ children or grandchildren. Isbell’s cousin also took to Twitter to say “it’s cruel” for families to have repeated notifications of “another Dahmer show.”

So when they say they’re doing this “with respect to the victims” or “honoring the dignity of the families”, no one contacts them. My cousins wake up every few months at this point with a bunch of calls and messages and they know there’s another Dahmer show. It’s cruel.

Still, more than half of Gen Z and Millennials disagree, meaning they don’t feel guilty watching this content, or simply don’t watch it in the first place. And we should note, only 14% strongly agree that they’re starting to feel bad—and given how common true crime content is, especially online, it makes sense that most viewers might think there’s no issue. On Gen Z’s favorite social media platform TikTok, the hashtag #truecrime has 21.B views, and YouTube is full of channels dedicated to all genres of videos involving re-telling crime stories. It’s no longer just ominous music and black and white photos—stories are being told in tandem to something as normal as creators doing their makeup.

Another part of the issue is the sheer amount of content in this category: Netflix alone produced 18 true crime documentaries and reenactments between July 2020 and March 2021 and has increased that content since, given its success. Across platforms, there’s tons documentaries, docuseries, and reenactments of notorious crimes, especially about male serial killers. The repeated exposure, and subsequent desensitization to these stories, can lead to a misplaced relationship between the viewer and the criminal. Viewers have even gone so far as to thirst publicly over Ted Bundy after watching one of Netflix’s (many) documentaries and dramas about the killer. The fandom got so loud the brand even addressed it themselves:

Despite all the debates, brands aren’t slowing down their production of true crime content. True crime is a major part of the 2023 production line up for both streaming services and traditional cable channels. It takes up a whole category on most streaming platforms now, and is its own podcast category on music streaming services. And despite many feeling at least some guilt about watching this content, our data shows that young people are continuing to consume it, so we can expect this somewhat controversial media will continue to grow—especially as it breaks records and becomes more profitable than ever.