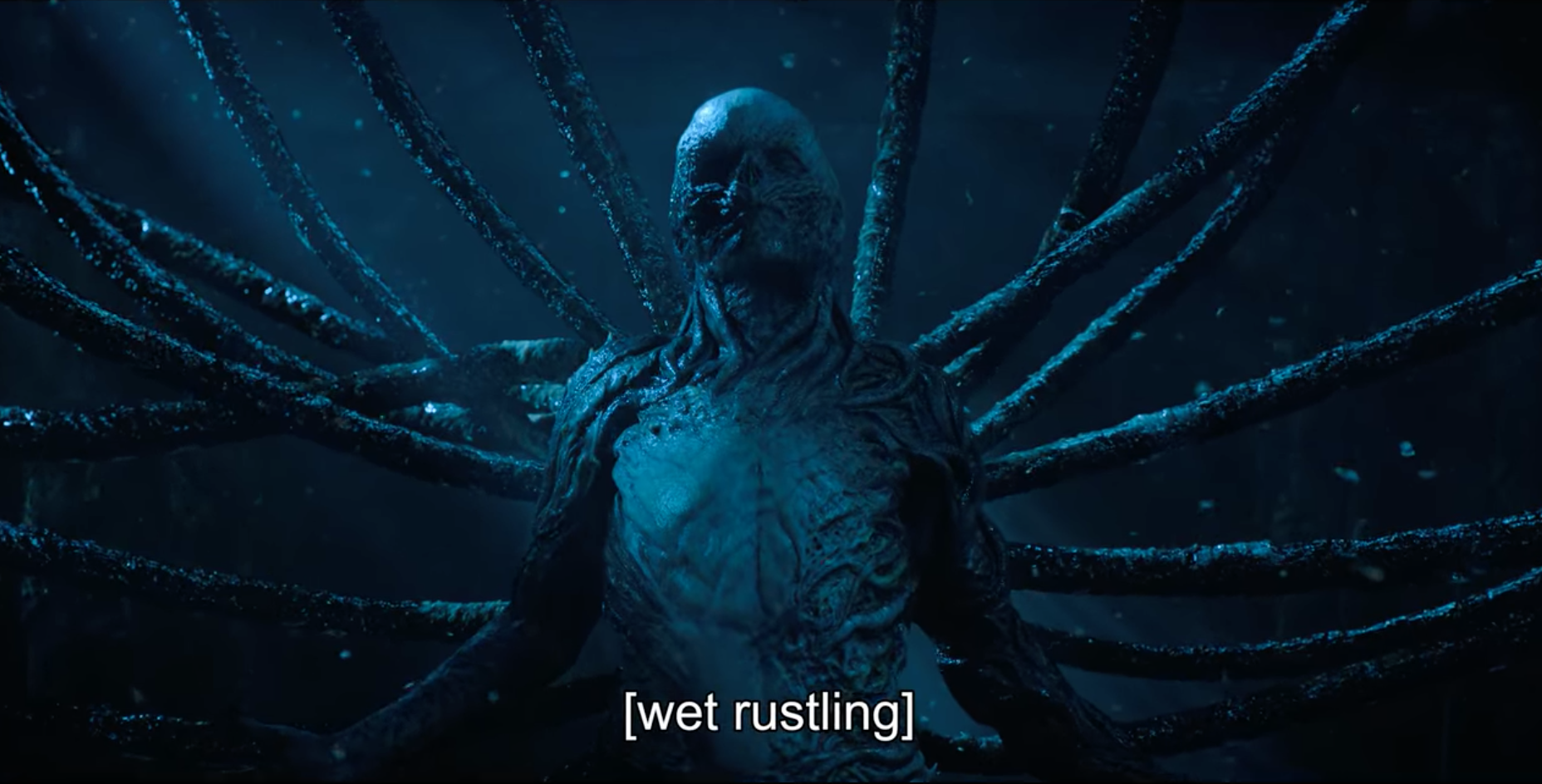 More young viewers are using subtitles than you’d think, and this is why…

You might remember a Stranger Things viral moment earlier this year involving the word “squelch,” all thanks to the popularity of subtitles for young viewers. The show, in all its otherworldly villain glory, used subtitles like “wet footsteps squelch” and “desiccated withering” to describe the sounds of the scene for viewers using subtitles. But it’s not just those who are hearing impaired who are seeing those descriptive words as the shows’ action plays out now, it’s tons of young people, who are making subtitle use while watching TV the norm. But why are young people into subtitles if they don’t need them, and how many are actually using them?

In our latest TV and Entertainment report, YPulse asks 13-39-year-olds about the TV and movie content they watch (we cover social media entertainment in our Media Consumption Monitor and The TikTok Effect trend report), and what their viewing experiences are like now. When we ask whether they prefer subtitles or not when watching TV, the majority tell us they are using them: 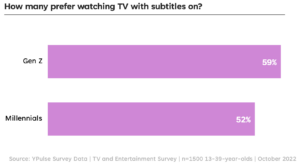 More than half of young people prefer to use subtitles

Subtitles used to be viewed as a needed function, and they were often poorly auto-generated on a delay for cable TV. Now, more than half of young people tell YPulse they prefer to use subtitles, and it’s not just because they need them; the gen makes use of reading text while watching movies/TV to keep up with murmuring dialogue, to distinguish thick accents (looking at you Peaky Blinders), and some say just to get a head start on a scene and go back to looking at their phone. Subtitle use is especially popular with Gen Z males: 61% say they prefer to use them.

This popularity is beneficial to those who do need them because media brands like Netflix are putting more effort into making subtitles as immersive an experience as the audio itself. “Squelching footsteps” was not written to be meme-ed, even if it was successful as one, but rather to engage viewers who rely on the subtitles to get more than a basic description. Netflix is the number one source of entertainment Gen Z and Millennials are using, and the one they feel offers the most inclusive content, which extends to hearing accessibility.

Millennials, while slightly less likely to prefer subtitles than Gen Z, are using them for their children. According to a Kids Industries survey of parents with kids 5-15-years-old (a.k.a. Millennial parents) in the U.S. and U.K., the majority of children in the U.S. watch content with subtitles or closed captions all or most of the time, and half of kids in both countries need subtitles to enjoy the content they are watching. According to one expert, “Subtitles add an increased dimension of understanding to viewing—giving a wider perspective, a divergence of input helps the children make deeper meaning.” Watching content with closed captions can reportedly improve literacy, vocabulary, and the speed of reading. For kids’ media brands, the widespread use of closed captions should be a sign to improve accuracy and make sure subtitles are available for all programs.

They’re used to subtitles from shows in other languages

One of the reasons subtitles have become so mainstream to their watching experiences is because of their interest in foreign language shows. These gens are interested in entertainment from around the world, thanks to the global platforms they’ve grown up with access to, and YPulse’s Local/Global Citizenship report data shows 76% of Gen Z and Millennials agree, “It doesn’t matter what country a TV show / movie is from, if it’s good I’ll watch it.” And while some streaming services give the option to watch certain popular shows dubbed in English, many young people choose subtitles and listening to the original audio instead.

Squid Game proved how popular non-English shows are, being Netflix’s most streamed series of all time, and subsequently how important subtitles are. The Gen Z and Millennial favorite was deemed a subtitle must on social media because the English-dub was considered laughable to some, despite others praising the English voice actors. However, even the subtitles sparked a discussion about accurate translation, and making sure viewers get what the original language really means, not just a direct translation or a similar phrase. But subtitles and closed captioning need to move quickly, and can’t be too long, so words and linguistic context are often spliced for efficiency.

Years ago, YouTube became a leader in subtitle accessibility through their “Community Captions feature,” which allowed anyone to work on accurate subtitles for YouTube videos. The function was disabled in 2020, though, and has only recently been replaced by a new, private, “Subtitle Editor” role for channels. But on Gen Z’s favorite social media platform TikTok, subtitles are common, thanks to a function within the app that captions videos with original sound automatically—and Deaf creators who have promoted its use.

When they initially launched the captioning tool, TikTok said their aim was to foster better inclusivity for hard of hearing and Deaf users, and that they would continue to work with Deaf creators to identify more areas for improvement. And Black Deaf creators, like viral sensation Scarlet May, have been notable drivers of making users of the app more conscious of this kind of inclusivity. Through videos on using sign language, and even skits, creators on #DeafTikTok (a tag with 1.7B views) are raising awareness for the importance of being inclusive to Deaf and hard of hearing people in video content.