The Media Platforms BIPOC Youth Say are Most Diverse and Inclusive 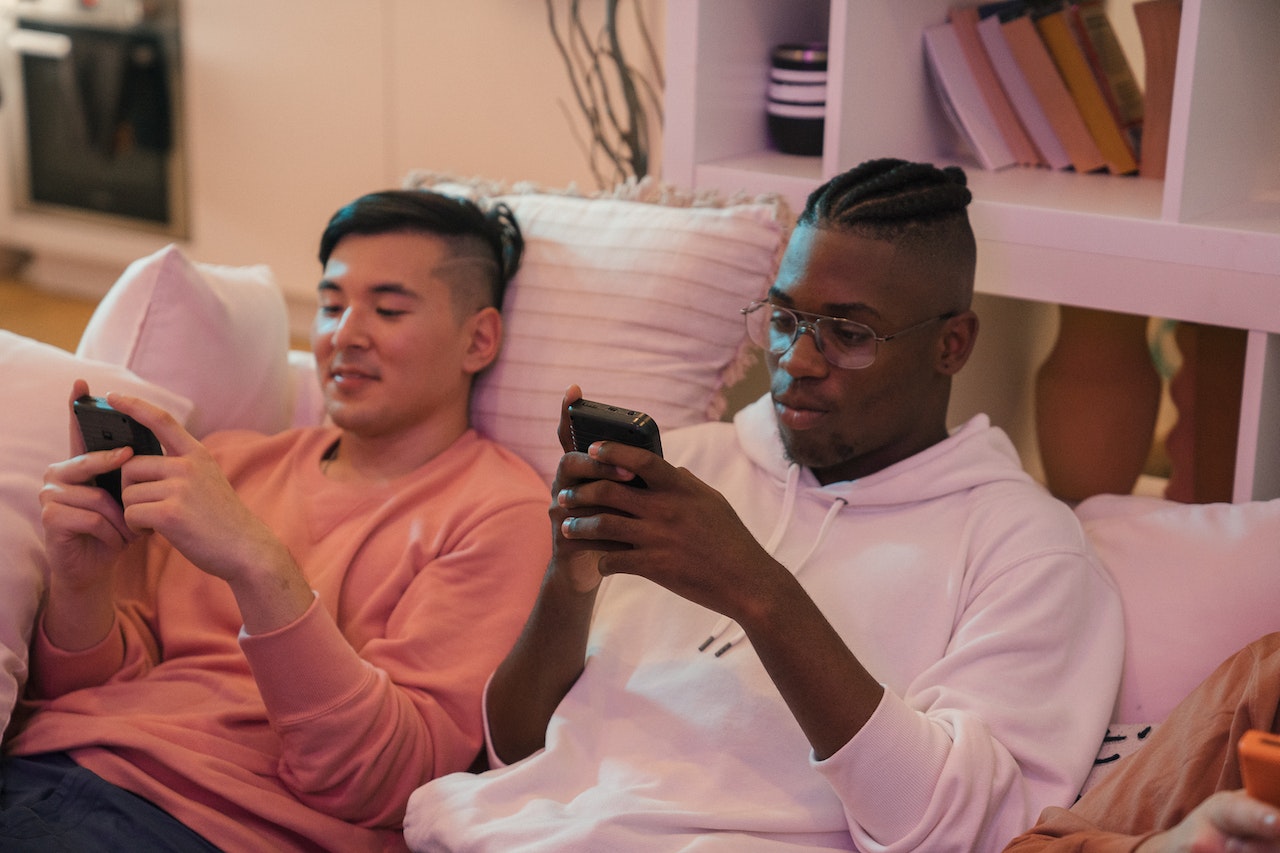 Of all the platforms they get entertainment from, these are the ones that BIPOC youth say are the most inclusive and diverse…

Research shows that entertainment with diverse casts and crews draws in more viewers, and even makes more money, yet diversity in entertainment remains inequal, especially in representation of people of color. Streaming services have had a positive impact on this discrepancy in on-screen and behind-the-camera representation, but there’s absolutely room for growth—and YPulse’s research clearly shows that Gen Z and Millennials aren’t willing to settle for media that doesn’t feature diverse casts, creators, and representation of experiences. Our own TV/Entertainment research found 77% of young people agree that “TV shows / movies should make an effort to represent all races.” But even as most media platforms have upped their initiative, pushing out more diverse content and bringing attention to more diverse creators (many of whom are from these gens), some are much more successful than others.

Half of Gen Z identify as BIPOC, and they’re looking to see their experiences in the media they consume. It’s important to recognize not only overall youth opinions on diversity and inclusion, but also to understand what platforms are currently providing the representation in entertainment that they so clearly want. YPulse’s Media Consumption Report shows which media platforms 13-39-year-olds think are doing the best job with representation in entertainment , and these are the top platforms young BIPOC see as being diverse and inclusive, compared to their White / non-Hispanic peers: 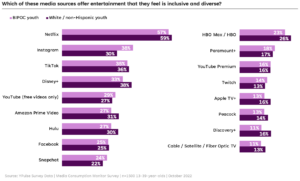 The top platforms here align with the media platforms they’re watching most—supporting the idea that diversity and inclusion can be drivers of their viewership. But save for a few platforms, BIPOC youth are less likely to say media platforms are providing inclusive and diverse entertainment. This shows that while strides may have been made in inclusion in media in the last decade, there is still more to be done. In fact, YPulse data shows 73% of all 13-39-year-olds overall, and 77% of BIPOC youth still agree “Entertainment media can do a better job of representing minority groups.”

Netflix is the strong lead on diversity and inclusion

Nearly 60% of young consumers say Netflix offers diverse entertainment, making it the top platform being perceived as inclusive—and the only to be chosen by more than half of these young consumers. And the brand has worked hard to get there; in 2021, they commissioned a diversity study to see where they were lacking in representation. It showed “Netflix was also found to exceed proportional representation of Black leads and main cast.” However, there were gaps, and “other racial and ethnic groups were underrepresented relative to the U.S. population. LatinX characters were just 4% of leads, despite being 12% of the population, and just 3% of creators and producers were LatinX.” YPulse’s TV/Entertainment report data shows 68% of BIPOC youth agree they wish they saw more people of their race in TV shows / movies.

Disney+, despite looking like they’ll soon pull ahead of Netflix in subscriber count, still falls behind in diversity and inclusion. In fact, only one in three BIPOC youth say Disney+ is inclusive and diverse, showing there’s still plenty of work to be done for Disney. They did mark a significant step with their recent The Little Mermaid trailer release, showing Ariel being portrayed by Black actress Halee Bailey. The trailer spurred a viral moment on social media showing how meaningful true representation can be, especially to children, and we’ll be watching to see if their ranking on this question improves after the release of the film.

Of the top five media platforms BIPOC youth say are inclusive and diverse, three are social media platforms. These democratized content spaces inherently offer more diversity, as the majority of the content on them is made by people just like them. Our New Content Creators trend report found that 70% of BIPOC youth create their own social media content for a broader audience than just their friends and family, compared to 61% of White / non-Hispanic youth.

Mainstream media platforms like cable TV fall to the very bottom of the list, alongside the independent sites and apps for cable networks and channels. These sources, in addition to simply being used significantly less by Gen Z and Millennials, just do not meet the new standards for inclusion and diversity that drive streaming services and social media.

BIPOC youth are +8pts more likely than White / non-Hispanic young people to say Instagram offers diverse and inclusive content. And given that 61% of BIPOC Gen Z and Millennials are Instagram users, this could be one indication of why the platform is so popular with them. Instagram has been a popular platform for sharing critical information, about everything from social causes, to supporting BIPOC business owners, to preserving Black culture and the African diaspora. The platform has also made a point to give tools to these creators like enhanced tags to ensure proper credit for their work after a strike on TikTok for this issue. Comparatively, TikTok falls behind, and YPulse data shows only 51% of BIPOC youth say they use TikTok compared to 54% of White/non-Hispanic.

BIPOC youth are also more likely than their White/non-Hispanic peers to say Snapchat and YouTube as diverse and inclusive. Like Instagram and TikTok, these platforms are driven by their creators, giving them more opportunity for diversity. But YouTube especially has made an effort to lift up their BIPOC creators through projects like a Black List x YouTube Originals Black Voices Creator Fellowship to “nurture the next wave of creatives from underrepresented communities.” YouTube is also a popular hub for more professional channels (given the dwindling reputation of cable TV), hosting diversity focused media brands like Key TV, Keke Palmer’s platform intended to “[incubate] diverse talent across all phases of the creative process.”