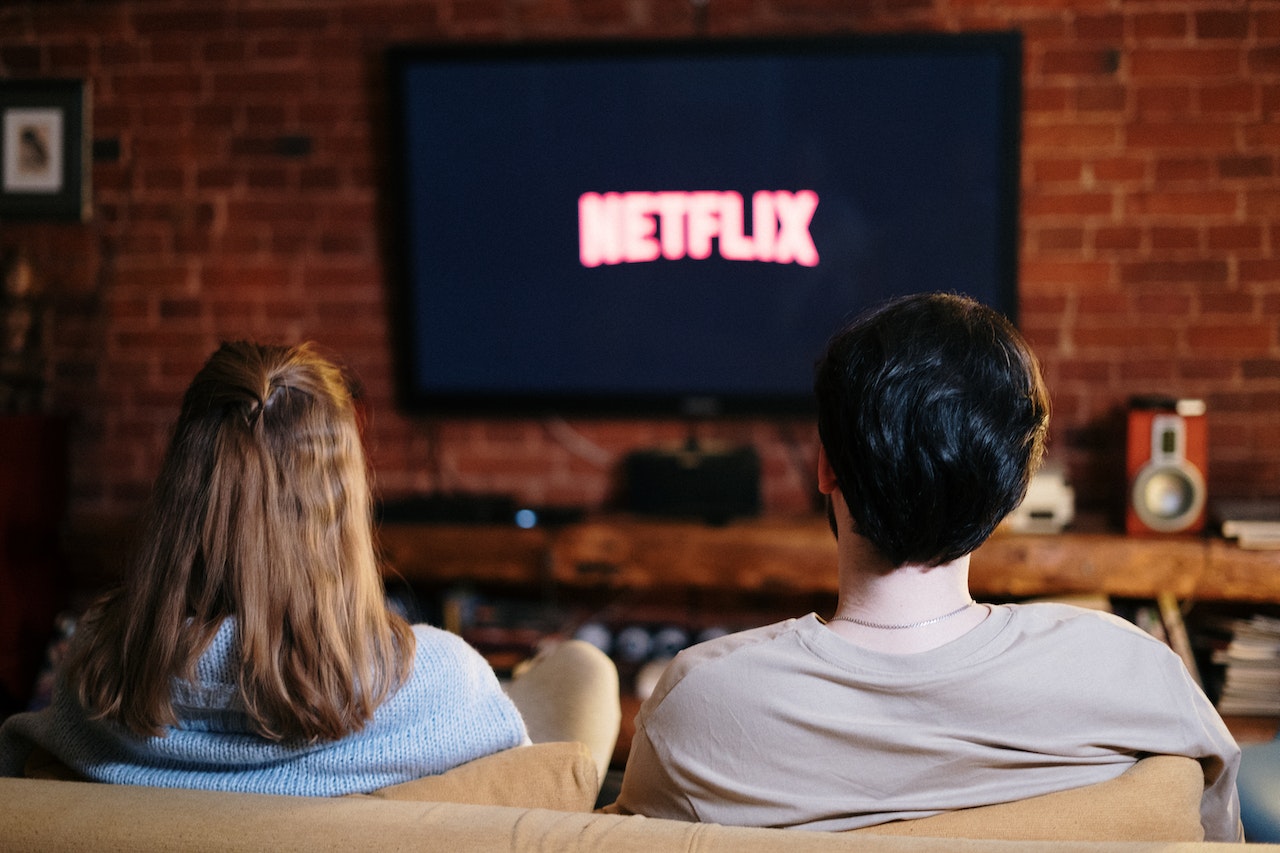 For Gen Z and Millennials, cable TV is nearing obsolete; streaming services have created binge-watching culture and provide a catalogue of content so big they’d never run out of things to watch. It can actually be exhausting at times, but that doesn’t stop young people from spending plenty of time (and money) on their favorite platforms. So even though social media is starting to dominate their screen time, young people definitely are watching TV shows, with 66% of 13-39-year-olds saying they’ve watched a TV series in the last week. In fact, YPulse’s Media Consumption Monitor shows young consumers are paying for an average of three streaming services at once. But, in order to keep up with all their favorite shows, they’re willing to.

With their passion for their favorite content, young consumers have been the drivers behind some of the most successful shows of late. Though we know they love their comfort re-watching, we ask 13-39-year-olds what currently airing show is their absolute favorite, and these are their top responses:

There’s no shortage of reasons Stranger Things is at the top of their list—and has been for years. Season four alone is Netflix’s second most highly viewed show of all time (just behind Squid Games, meaning it’s the most successful English language show), racking up over 1B hours in total viewing time. From beloved character cosplays to viral subtitles, Stranger Things also had a social media take over few shows could rival (except maybe a couple on this list, but more on that later).

Its impact crosses industries, too: season four caused Kate Bush’s 1985 track “Running Up That Hill” to top global charts, and their collab advertising can teach other brands a thing or two about integrated marketing. Most of which, of course, hinges on young consumers’ love for “retromarketing,” or campaigns and products which make them feel connected to the shows 1980s aesthetics. Young people just can’t get enough, and brands can’t either; everyone from Jansport to Dominos has partnered with Netflix to tap the huge mass of fans Stranger Things has. Netflix has also capitalized on Stranger Things as they turn toward gamification, making two retro-looking games within their mobile app.

But if none of that is enough, then fans can relive the most recent season in theatres for this year’s Stranger Things Day (Nov. 6, the day Will Byers disappeared into the Upside Down, duh). However, they’ll be waiting more than a year for the next season, so other shows will have some time to shine.

Gen Z and Millennials have slightly different taste in TV

When it comes to which shows they absolutely love, Gen Z and Millennials are tuning into slightly different shows. While Stranger Things is without a doubt the top show amongst young consumers overall, their other favs are ranking differently. Sure, there’s some show overlaps, but their spot on the list tells the story of what genres of media are grabbing their attention: 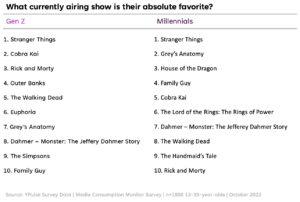 Gen Z are more likely to call a cartoon their absolute favorite show than Millennials, and YPulse data shows 35% of Gen Z say they’re watching cartoons weekly or more often, as compared to only 21% of Millennials. It’s not just young Gen Z either, as 18-24-year-olds are the most likely to say they’re watching this content, and clearly driving adult cartoons to the top of the list. They’re also big fans of shows centered around characters their age like Cobra Kai, Outer Banks, and Euphoria.

Millennials, on the other hand, are much more interested in mature fantasy TV shows with intricate plots like House of the Dragon and The Lord of the Rings: The Rings of Power.  Grey’s Anatomy ranks in at their second favorite show (yes, it is still currently airing), which makes sense given Millennials are significantly more likely to watch dramas weekly or more often (32%) than Gen Z (21%). It does still make Gen Z’s list, but perhaps platform accessibility has some influence…

One common factor amongst many of young people’s favorite TV shows is where they’re hosted: Netflix. YPulse data shows Netflix is the number one place young people watch video content weekly or more (though TikTok is giving the streamer a fight for their attention). It beats out every other streaming service by far—and this could be one reason why. Three of their overall top 10 shows are Netflix originals: Stranger Things, Cobra Kai, and the recently released Dahmer – Monster: The Jeffrey Dahmer Story. Plus, another three on the ranking are available to be watched on Netflix, making it an easy pick for their top streaming platform. YPulse data also shows that Netflix is by far the media source most young people say offers entertainment they feel is diverse and inclusive; 58% of young people choose Netflix compared to 36% who choose TikTok, making the second most popular answer -22pts behind.

Weekly shows are coming back

When streaming services made their big boom, it seemed a weekly show could never make a comeback. Now, Gen Z and Millennials are willing to wait for certain shows, and non-bingeable TV has made its way up their list of favorite shows. But, it’s worth noting that even weekly episodes are available on streaming services, not just cable (if cable at all), so their subscriptions remain a necessity. And, once the season is over, it’s all there to be watched and re-watched while they wait for the next instalment. Netflix has been trying their hand at weekly shows, even testing out a slow release with Stranger Things season four in two volumes.

But a few of their biggest favs are on HBO Max—and because they’re originals, they won’t be found on another platform anytime soon. We all know by now that Euphoria caused what Gen Z would call a “cultural reset” on television, from the viral aesthetics to the weekly Twitter discourse with each new episode. House of the Dragon has been incredibly successful, pulling in long time Game of Thrones fans to start the show off with 10 million viewers—the largest showing for a new series in HBO history. So while we never thought we’d go back to waiting for Sunday night at 8/7 central, these shows alone prove that young people are willing to go back to the old way of watching, if the show is worth it.