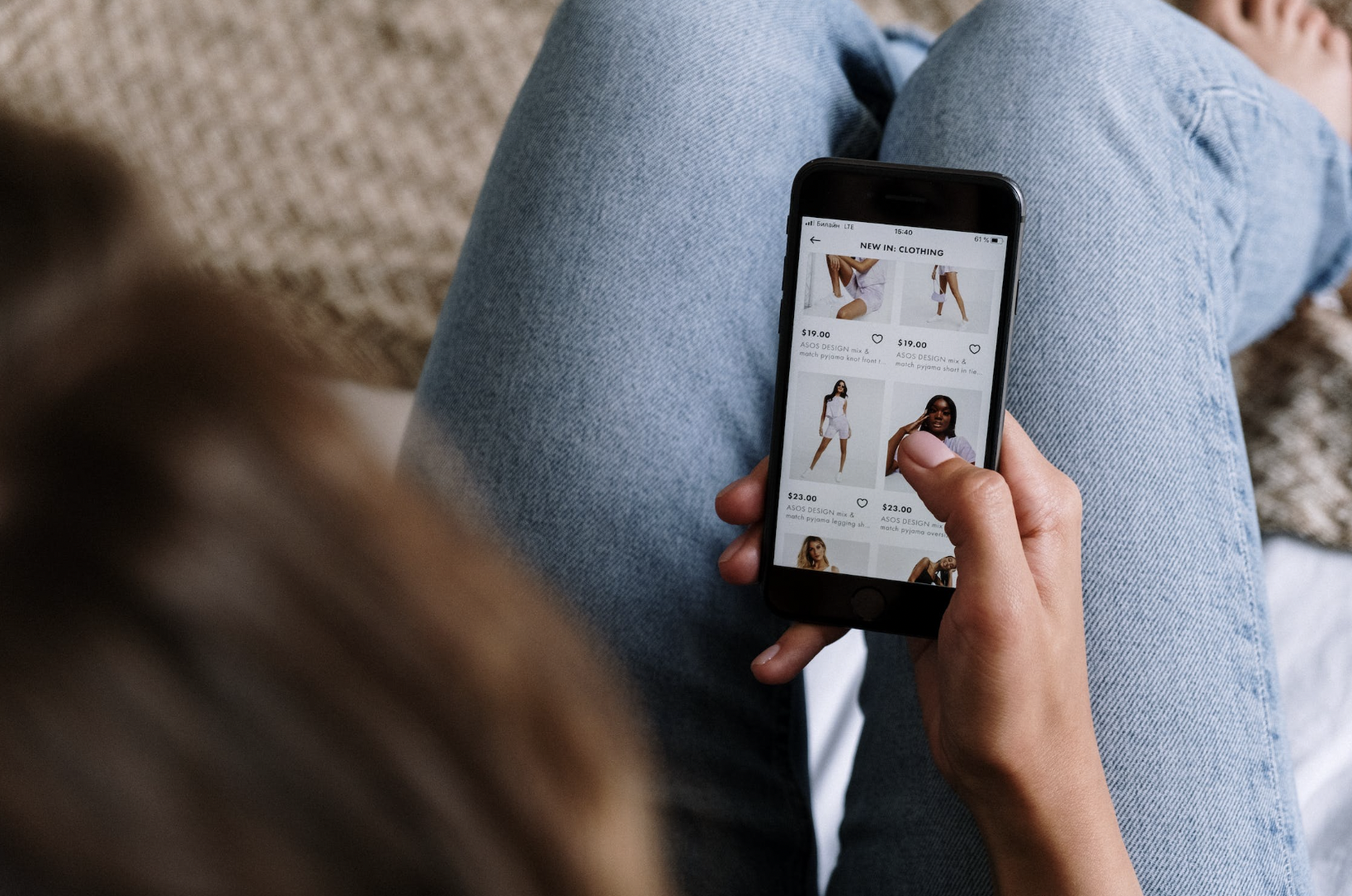 Social shopping isn’t just separate tabs and storefronts, it’s right in the posts Gen Z and Millennials are seeing on their main feed…

By now, we all know young people are making plenty of their shopping decisions based on their social media feeds. The recommendations influencers (or really, anyone viral) make are ones Gen Z and Millennials trust and follow. But, many types of content are limited to a “link in bio” or a thread of comments with product names in order for other users to buy what they see. Some, however, come with integrated product details, and the ability to purchase directly from the post, without the extra steps that might make them reconsider spending. This “social shopping” has been around for years, but young consumers are growing ever more sold on its presence in their regular social media feeds.

Now, it’s vital that social platforms (and the brands posting on them) integrate shopping. According to YPulse’s Social and Mobile Marketing Preferences report, 83% of Gen Z and Millennials agree that if you are posting a social media ad there should be a direct link to purchase. But, these ads need not be standout, campaign photos anymore to direct to shopping. In fact, 76% of young consumers say brands should make ads that fit in with what’s in their feed / on the site already, showing that while shopping tabs are useful, placing shopping directives right in posts is going to be the way forward.

And, YPulse data shows they’ve only gotten more popular. This year, more young consumers than ever are interested in social shopping, especially these three fully integrated kinds of shopping content: 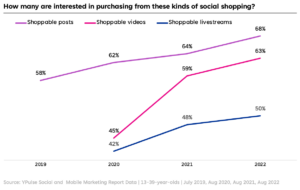 *Shoppable videos and livestreams not asked in 2019

Social shopping is popular with a majority of young consumers, and has grown steadily more so since YPulse started asking about it in 2019. Back then, 58% said they were somewhat or very interested in purchasing items directly from social media feeds, and that number has increased to 68% in 2022. Gen Z females are the most likely to say they’re interested in social shopping, at 73%, and are also most likely to have purchased something after an online celebrity posted about it or recommended it.

Though shopping directly on their feed has been available in some capacity for many years, the emphasis is really on it now. Instagram integrated shoppable shopping tags all the way back in 2016, and Pinterest added “Shop the Look” in 2018, which not only showed the items to purchase, but even the amount of inventory left. But as m-commerce became one of the primary ways young consumers shop, these functions turned into shopping tabs and pages. Insta even drove their shopping tab so hard that it replaced the notifications tab on the homescreen in 2020, but now they’re testing a shift back. It’ll make a home among settings and saved posts, while influencers and brands maintain the ability to tag direct shopping links on their posts.

But, what’s growing even faster than shoppable posts are shoppable stories on Instagram. Insider Intelligence reports that more than 26% of ad spending on IG is going toward stories, and will likely increase in the coming years, making it a multi-billion dollar revenue stream. Other platforms, like Poshmark, have opted to create social shopping in their own stories, rather than outsourcing to a swipe up on another app.

At this point, no form of content has Gen Z’s attention the way short form video content does, and YPulse data shows that more than half of young consumers say short videos are the type of advertising they’re most likely to pay attention to on social media. Since YPulse began asking about shoppable videos in 2020 (alongside the dramatic rise of TikTok), interest has shot from 45% to 63%, making it the second most popular kind of social shopping.

Obviously, TikTok has a major upper hand in this kind of content. Though, they’ve yet to make purchasing products directly from the For You Page possible. While they began testing a shop feed in June, nothing final has yet to come of it. Instead, shoppable videos on the platform come simply in the form of posts encouraging viewers to make purchases, which there is no shortage of on the app. Hashtags like #AmazonFinds and #TikTokMadeMeBuyIt have tens of billions of views each, showing social shopping has become a natural function of the app, with or without direct purchase functions. But other brands are successfully making shoppable video content, too—sometimes through TikTok. Instacart, for example, is letting brands and creators link their cooking videos to a grocery list on Instacart.

Meta has also identified this trend, and recently announced they would be shutting down their live shopping events on Facebook to focus on Reels. Young consumers have seemingly been on the fence about Instagram’s short form video content, but Meta remains firm that this is the future of their content. Like Instagram’s static posts, Reels will have shopping tags. But, Instagram Live will still offer the opportunity for shoppable livestreams, which have also been successful…

YPulse data shows a steady increase in interest for shoppable livestreams over the past three years, and some brands have been trying to lean in. While shoppable ads and posts are a given, livestreams are a more engaging way to reel in young consumers—holding their attention for more than a few seconds to lead to a purchase. Like Walmart’s shoppable concert, Gen Z and Millennial favs like Amazon and Google (via YouTube) have jumped in to live shopping experiences. Forbes reports that they expect live shopping to become a $25B market in the U.S. by 2023.

But, it’s still the form of shoppable content young people are showing the least interest in compared to others, like shoppable articles and snap-to-shop apps. It just hasn’t picked up in the U.S. the way it has in other countries, which is why many brands have been on the fence about making livestreaming a mainstay of their social shopping. While Like Meta’s step away from livestreaming, TikTok has gone back and forth on this kind of social shopping. In July, it was said they would actually be pulling out of livestream shopping in the U.S. and U.K., but now, the initiative is back. YPulse data shows that 11% of young social media users are using TikTok LIVE, and a study commissioned by TikTok found that 62% of their streaming users watch it everyday. However, YPulse’s Shopping and Retail report shows only 9% of young consumers have ever purchased an item from a livestream, so these livestreams may not pick up the way gaming has on the platform.

Young people are more likely to see advertising on social media than any other place. But the las...