3 Stats Show That Esports Are Mainstream in Western Europe, Too 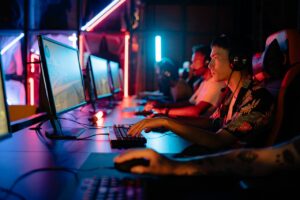 As gaming becomes a top form of entertainment among young Europeans, the majority are tuning in to watch others play, too…

YPulse has been talking about the importance of esports for a while now as Gen Z and Millennials have grown more interested in not only playing video games themselves, but watching others play, too. And while we’ve covered the rise of esports in North America, it’s happening in Western Europe, too. Gaming competitions have gotten so big across the Atlantic that they pulled in €465 million in revenue in 2021, have attracted major celebs such as David Beckham, and are getting the attention of European brands, too. Lamborghini, for instance, hosted an esports tournament, allowing gamers worldwide to drive the luxury car brand’s Essenza SVC12 sports car, while Pizza Hut is hosting tournaments as it breaks into the European market. Fashion brands are also outfitting esports teams: PUMA partnered with the Manchester City esports team, ASOS signed a deal with esports brand Fnatic, and Gucci collaborated with Fnatic to create a limited edition watch, which cost £1,150 each—and sold out in less than 48 hours.

Beauty brands, too, have been strengthening their ties to the esports community, including Charlotte Tilbury, who held a beauty tutorial and masterclass with pro makeup artists on Twitch during the Girlgamer women’s esports festival, while NYX Professional Makeup recently became the official beauty partner of esports organizations Dignitas—marking the first time a global cosmetics brand has collaborated with esports teams.

Clearly, many brands believe esports are the next frontier for marketing in Western Europe. But just how many young Europeans are really watching? Our latest WE Sports and Athletics report checked in on exactly how many Gen Z and Millennials are currently watching esports, and the overall appeal of this genre. Here are three stats that break it down: 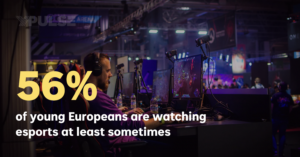 The majority of young Europeans are watching esports at least sometimes.

When asked how often they watch esports, just 44% of 13-39-year-olds in Western Europe say “never,” meaning the majority are watching them at least sometimes. In fact, our WE Media Consumption report found that 25% are watching gaming/esports content weekly or more often. Unsurprisingly, these numbers are higher among young males: 68% of both Gen Z and Millennial males are watching esports at least sometimes, and 47% of Gen Z males are watching weekly or more often. Perhaps even more impressive is the fact that 44% of young Europeans say they’re avid followers of esports (again higher among young males) showing just how prominent this pastime is becoming in their lives. In fact, the global esports audience has grown to over 500 million people in the past few years—and it’ll likely keep growing as more young consumers tune in. 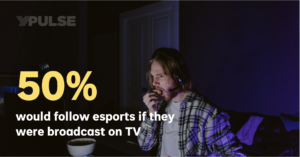 Half would watch esports if they were broadcast on live TV.

Esports tournaments have typically taken place on streaming platforms like Twitch, Discord, and YouTube, but as the industry becomes increasingly mainstream, young consumers want to see this content showing up on traditional TV stations, too: 50% of young Europeans say they would watch esports if they were broadcast on live TV. Again, this is higher among young males (53%), but young females say they’d tune in too: 41% of Gen Z females and 47% of Millennial females agree they’d watch esports if they were broadcast on TV. This presents a massive opportunity for broadcasters. The 2021 League of Legends World Championship, for example, pulled in more than 4 million viewers; compared to the 112.3 million viewers that tuned into the Super Bowl, that’s a pretty big deal. Some TV broadcasters are already taking this to heart and have added esports to their rosters: Canal Digital, Skylink, Disney, BBC, ITV and Sky have all broadcast esports tournaments in Western Europe, giving young Europeans even more reason to watch. 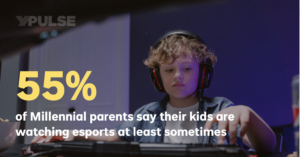 The next generation of esports fans is already in the making.

While Millennial parents have mixed feelings about how much time their kids are spending in front of screens, the reality is that the next generation is very much plugged in. In addition to watching a lot of video content, kids of Millennial parents are becoming a generation of gamers: 59% are playing games on a console weekly or more often and 63% are playing mobile games weekly or more. Now, as gaming becomes the norm for this generation, watching esports is, too: 55% of Millennial parents tell YPulse their kids are watching esports at least sometimes, and 34% are watching at least weekly. As the next generation continues to tune in, it’s likely that esports will become even more mainstream—and even more important to brands’ marketing.