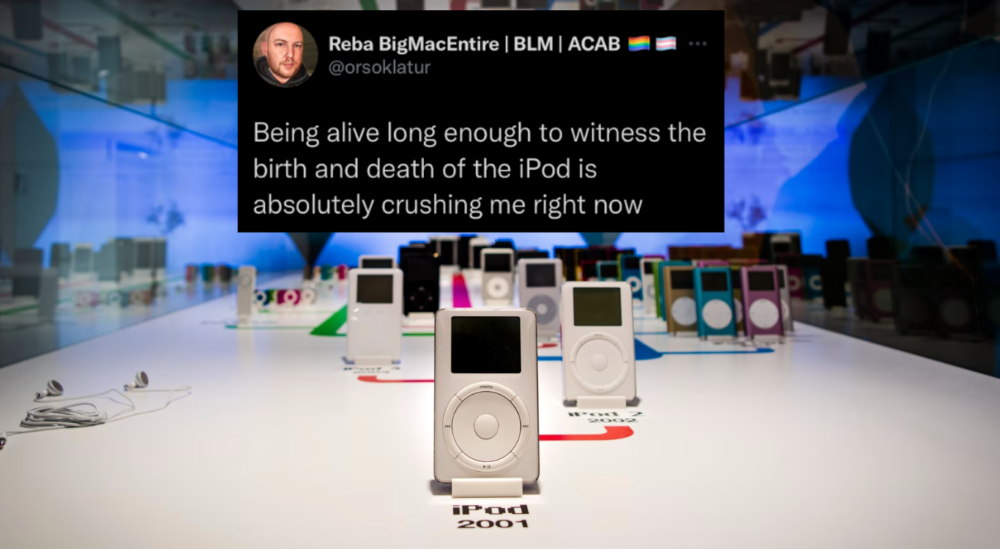 RIP, iPod—Fans Are Mourning (& Meme-ing) Apple’s Decision to Discontinue The Device
It’s truly the end of an era. While Apple has been pushing out new devices fromAirPods to the Apple Watch in recent years, they’re phasing out one of their original products. After nearly 22 years, Apple announced on Tuesday that they will discontinue production of the iPod Touch. The iPod was initially introduced in 2001, fueling a new era of music consumption for Millennials. The New York Times reported that the IPod “provided a blueprint for Apple for decades by packaging unrivaled industrial design, hardware engineering, software development and services. It also demonstrated how the company was seldom first to market with a new product but often triumphed.” Following the news that the iPod is no more, young people on social media started mourning the loss of the once-popular device, reminiscing their memories with their own iPods, and (of course) creating memes. @orsoklatur tweeted: “Being alive long enough to witness the birth and death of the iPod is absolutely crushing me right now.”Meanwhile, following the news of discontinuation, some people began listing their used iPods online for “thousands of dollars” on eBay, Etsy, and Facebook Marketplace to cash in on the “nostalgia-fueled demand.”  iPod shuffles saw a mini-resurgence in popularity last year when Gen Z started using them as hair clips to “troll” Millennials, but this time the desire for the device appears genuine. The reactions about the news clearly shows how certain things from the 2000s continue to have a strong nostalgic effect on the generations who grew up with it. 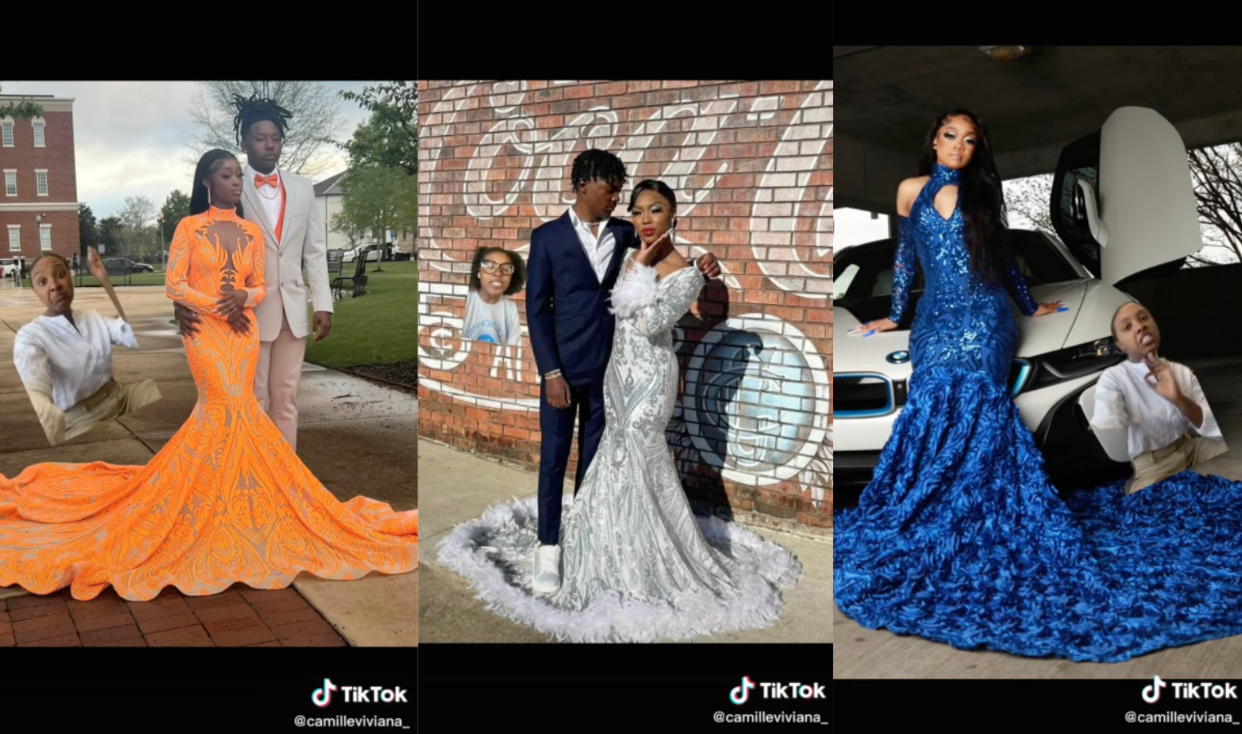 Mississippi Prom Season Is All Over TikTok
It’s officially prom season—and while teens around the U.S. are gearing up for the annual dance and showing off their looks, there’s one state in particular that has been generating attention on TikTok for their prom looks. The hashtag #MississippiProm has 4.8 million views on the app—and 28-year-old Camille Viviana created a series where she reviews the best looks from her home state, which specifically highlights young Black girls’ fashion. Viviana told BuzzFeed News that she was inspired to start the video series thanks to her 19-year-old sister and their high school friends who were sharing photos of prom dresses on Facebook (which some of them dubbed the “Facebook Met Gala”). Viviana, who has over 82.8K followers on TikTok, pulled photos off Facebook to review the outfits, and makes sure that each of her reviews are positive and praises the young women. Many of the outfits featured include “prints, colors, features, sparkles” along with color-coordinated suits and luxurious-looking props and accessories, where it’s “a matching car, jewelry, decorative fans, or straight-up cash.” One of the first videos Viviana featured was of 18-year-old Shamiya Guton from Shannon High School, who wore a royal blue mermaid dress “featuring sequins, cutouts, and a dramatic train, complete with a matching blue-accented BMW and long nails.” One follower commented on Vivana’s videos, “They look better than celebrities at award shows,” while another wrote: “Every single one of these was better than anything I saw on the red carpet all season.” The excitement around the Mississippi’s prom shows how social media can make local events into massive trends for young people today. 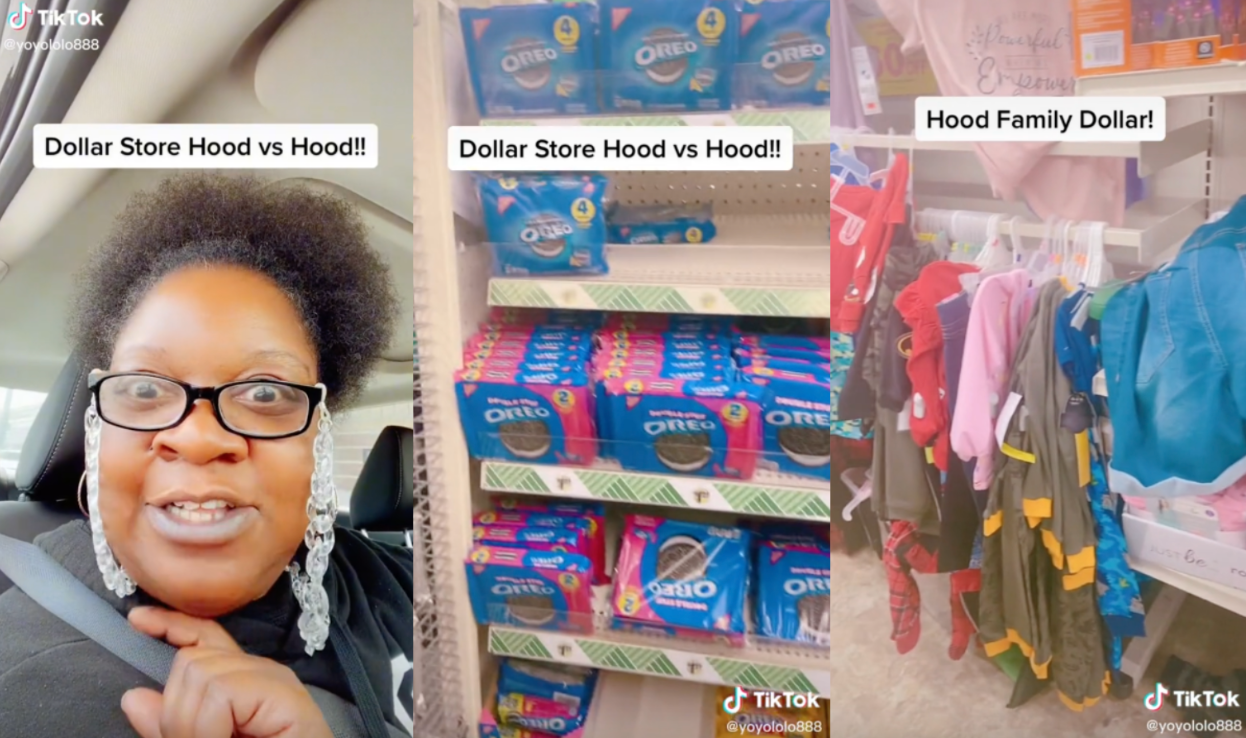 A TikToker’s Videos Showing The Difference Between Dollar Tree Stores Based on Neighborhood is Calling Attention to the Wealth Gap
On TikTok, Dollar Tree stores are a popular place, with users showing off its affordability and “life hacks” under the#dollartree hashtag, which has a whopping 4.4 billion views on the app.But the chain recently went viral in a different way when user Yolanda Jone started a “Hood vs. Hood” video series where she shares what different Dollar Tree stores look like in different neighborhoods—putting a focus on the wealth gap and how each location’s product selection and store setup is different in affluent neighborhoods compared to lower income ones. In Jone’s first video, which amassed 6.4 million views, she drives half an hour away from her hometown to a Dollar Tree, in what she refers to as a “rich” neighborhood, that is significantly different than her local one and features “products attractively displayed on the sidewalk” and carries brands like Oreo, Hostess, Chips Ahoy! and even feta cheese. At the end of the video, she says: “They was so stocked up, they had so much stuff that I didn’t even buy anything. All I can say is, that’s a damn shame.” In her following videos, she shows other Dollar Tree stores in lower income neighborhoods that she refers to as a “shock to her system” with disorganized or empty shelves, items thrown on the floor, open refrigerators for frozen foods, and piles of shipping boxes. Jone’s videos are going viral for both the reveal that stores in different neighborhoods provide very different experiences, and her upbeat personality, which has viewers clamoring for more reviews. Brands take note: an ambassador might not be sharing completely positive content about you, but they can still fuel massive buzz. 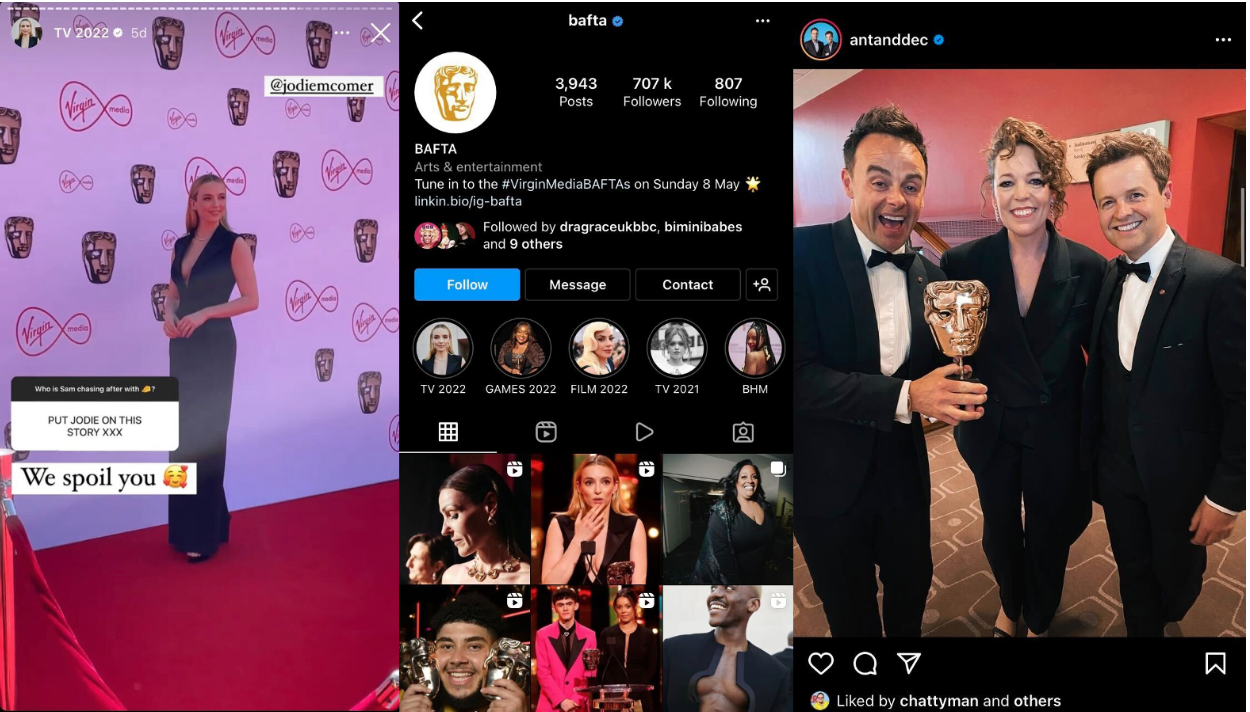 The BAFTAs TV Awards Hit London This Week, and Of Course Young Fans Watched Them on Social Media
Earlier this week, British celebs got together for the BAFTA TV Awards in London. While the outfits didn’t get the praise–or backlash–of the Oscars or Met Gala, the outfits of Jodie Comer in Boss, Nicola Coughlan in Valentino and Olivia Coleman in Alexander McQueen were praised within the harsh British media. As young consumers catch up with pop culture events through social media, the @baftas TikTok account gave young viewers all the latest gossip and fashion trends without having to switch on the tele. While their Instagram account spreading the #VirginMediaBAFTAs and giving the best behind-the-scenes for those that cannot get enough of their favorite actor or actress. The action live on TV did well too, peaked with an audience of 3.8 million throughout the night–winning in the ratings across all channels and making it the third most watched programme of the night. About one in five young consumers in Western Europe tell YPulse that award shows are a pop culture moment their generation cares about, so supplementing the action on social channels is a wise move for the event. Especially as roughly half of young European consumers also say that during live TV events (like award shows, sports games) follow along on social media instead of watching on TV.

Ncuti Gatwa Is The First Black Actor to Portray The Doctor & Fans Are Praising The Casting Choice
Ahead of the BAFTA Awards on Sunday, BBC announced that Sex Education star Ncuti Gatwa has been cast as the lead role in the upcoming season of Doctor Who, the long-running sci-fi series about a time-traveling alien who solves problem and battles injustices across the world. While the Rwandan-Scottish actor will be the 14th actor to take over as the Doctor (who regenerates into new people, prompting the show to replace its lead actor “every few years”), he will be the first Black man to portray the character. YPulse told you that young viewers are interested in seeing BIPOC actors cast in leading roles of iconic characters—and after the news was revealed, fans from the U.K., North America, and all over the world have shown their support for Gatwa social media, with many saying they are excited to finally see a Doctor “who resembles them.” However, some Sex Education fans are worried about what the casting decision means for the future of the hit Netflix show (which just premiered its third season last fall and has been renewed for a fourth season) where Gatwa is one of the main characters, and has scored him multiple BAFTA nominations. While casting Gatwa is a historic move, the 29-year-old is also one of the youngest actors to be cast as the Time Lord—and The Daily Mail asked whether “the TikTok generation can save Doctor Who?” thanks to his younger fan base. YPulse has told you how casting young and diverse actors that are popular with Gen Z is a way to attract younger fans to a project—and this just might be the thing that can reel newfound Doctor Who fans in. 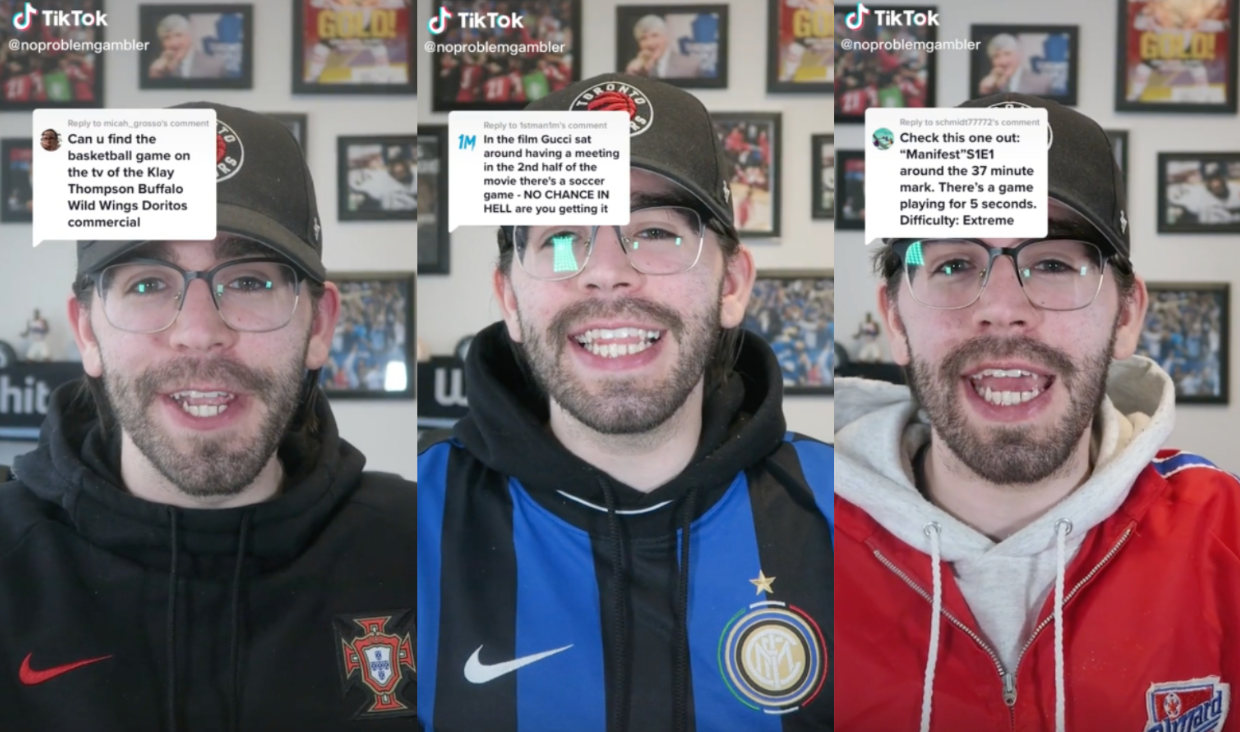 A TikToker is going viral for his videos that identify sports clips in the background of popular commercials, movies, and TV shows like The Office.

Selena Gomez and Our Place collaborated on a limited-edition kitchenware collection.

The trailer for Avatar: The Way of Water racked up 148.6 million views in one day.

The emo revival keeps on coming: My Chemical Romance released their first song in 14 years.

Batman Unburied has surpassed The Joe Rogan Experience as the No. 1 podcast on Spotify.

Eurovision has hit the screens, with the finals coming on May 14th.