COVID Has Changed Parenting in Western Europe—Here’s How

YPulse’s most recent WE Millennial Parenting report found that 53% of 21-39-year-olds in Western Europe are now parents, and 32% want to be parents in the future, making one thing clear: Millennials are settling down, and the majority of this generation will be focused on family moving forward. But it’s been quite a year to be a parent, and the pandemic has thrown some unique challenges at Millennials with kids, the majority of whom are under the age of nine. With widespread school closures (along with all those after-school clubs and activities), parents ​​have been forced to juggle educating and entertaining their children at home while also dealing with the ongoing uncertainty, isolation, and career challenges everyone else has experienced. And it’s not hard to imagine that this has had an impact on exactly how they parent.

In YPulse’s research on Millennial parents, we asked 21-39-year-old moms and dads in Western Europe to tell us how COVID has affected their parenting. Here’s what we found out: 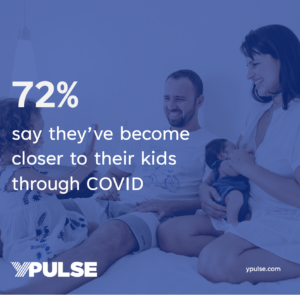 Nearly a quarter of Millennial parents in Western Europe say COVID has made them closer to their kids.

While the reality of quarantining with kids certainly wasn’t a walk in the park (take the many parenting survival guides and wine-mommy-esque memes for example), the majority of Millennial parents in Western Europe agreed that COVID has actually made them closer to their kids. More than that, 60% say it actually made them better parents, highlighting that, despite the challenges, being stuck at home together created a pretty bright silver lining for young families. Indeed, a study from the Institute for Social and Economic Research at the University of Essex found that just 5% of parents in the U.K. reported their relationship with their kids worsening as a result of the lockdown measures. Another U.K. study found that parent-child bonds grew stronger with so much extra time spent together, and a U.S. study found that dads, in particular, saw improvements in their relationships. We know well that most of the extra childcare labor brought on by the pandemic has landed on the shoulders of women, but the research suggests that dads have been spending more time with their kids than they did pre-pandemic, which has benefited the family. 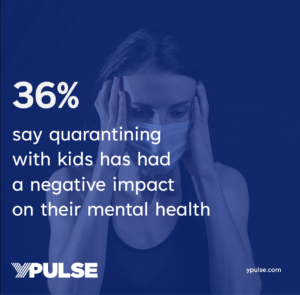 But nearly two in five say quarantining with their kids has had a negative impact on their mental health.

While the majority of 21-39-year-old parents in Western Europe say that quarantining with their kids has not hurt their mental health, 36% say it has—and they should not be ignored. What’s more, moms are far more likely than dads to say that their mental health has been negatively impacted, with nearly half (48%) of Millennial moms reporting a downturn. Despite reporting a better relationship with their kids, moms have been experiencing higher levels of burnout and depression since early in the pandemic, largely due to the increased childcare responsibilities they’ve taken on on top of their careers. These headlines pretty much say it all: “Working moms are not okay.” “Pandemic Triples Anxiety And Depression Symptoms In New Mothers.” “Working Moms Are Reaching The Breaking Point.” More than just the added responsibilities, though, parents—and moms in particular—have also felt increasingly isolated as parenting dominates their lives. A recent study in the U.K. found that lockdowns have increased feelings of social isolation and loneliness among parents, and especially among mothers. Another study from Germany found that working parents are experiencing the highest levels of mental health stress. 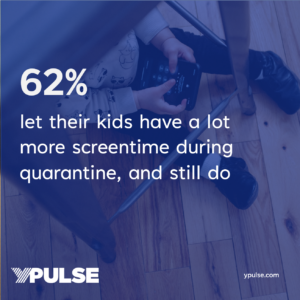 The majority let their kids have more screentime during quarantine, and still do.

With their day-to-day realities looking completely different from last year and so many taking on childcare and more education responsibilities, it’s probably not too much of a surprise to hear that 45% of Millennial parents in Western Europe say that during quarantine they’ve given up on a lot of rules for their kids, screentime limits being one of them. After all, this generation has always been reliant on tech solutions, and now 62% of Millennial parents say they’re letting their kids use screens even more. What’s more, 40% have given their kids their own device as tech becomes further integrated into the next generation’s upbringing. Phones and tablets have been major distractions for kids for a while, but Internet Matters reports that Alexa and Siri will “become common” in children’s bedrooms as smart speakers for kids become more popular as well. Popular toy companies like Jazwares are even testing ways for kids to be able to play with their toys while they’re connected to Alexa-enabled devices. Meanwhile, our YPulse’s recent Western Europe media consumption report found that the majority of parents in Western Europe are letting their kids watch some kind of video content weekly or more, and research from WildBrain Spark and nScreenMedia found that 75% of parents are watching video content with their children several times a week or more. Now, the next generation of viewers is so tuned in that streaming platforms are racing to dominate the kid’s content industry, and family-friendly content is taking over the likes of Netflix, YouTube, HBO, and more. 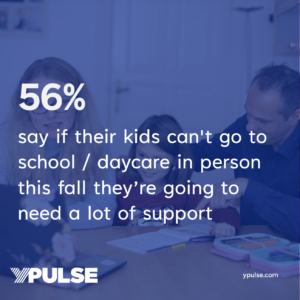 More than half will need help if schools don’t stay open this fall.

Nearly half of Millennial parents in Western Europe currently stay home with their kids during the weekdays—but that may not be able to continue this fall. Most European countries have opened schools again with restrictions, including social distancing, mask mandates, COVID testing, and some remote learning. But as the Delta variant continues to surge across the E.U., it’s possible that schools will shutter again, and Millennial parents will be left to educate and entertain their kids from home again. If that’s the case, the majority of parents say they will need a lot of support.

North America
The Top Platforms Kids Are Watching Weekly, According to Millennial Parents
What platforms are kids watching video content on weekly? TL;DR: Netfl...
Western Europe
3 Stats Show Where Young Europeans Stand on Religion
Gen Z and Millennials have been moving away from traditional religion for a while. ...
North America
Elon Musk Just Bought Twitter—Here’s How Many Young People Have Been Using The Platform
Elon should know this how many Gen Z and Millennials are using Twitter... T...