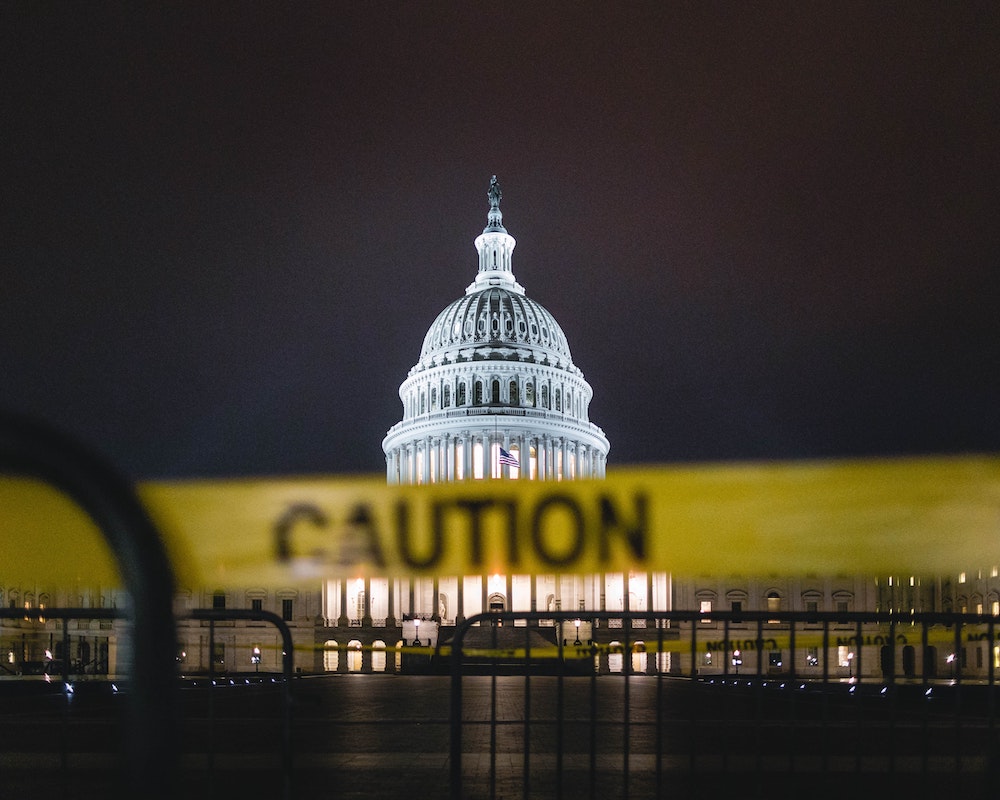 On the day of the impeachment hearings, we asked young people how they felt about the Capitol riots, their opinions on impeachment, whether President Trump should be suspended from social media, and more…

We hardly need to rehash the events of the last week, which have included the historic storming of the Capitol, President Trump being banned from social media, and a vote to impeach him. These unprecedented incidents have dominated headlines, social media, and begun to appear in brand statements as well. But while we hardly need to tell you what happened, we can reveal exactly how young people feel about all of this significant news. Today, one week after the invasion of the Capitol building and on the day of the impeachment hearings, we used our on-demand survey platform PULSE to ask young people their opinions on everything from the violence in D.C. last week to the social media bans and more.

We began by asking 16-34-year-olds their overall feelings about the events at the Capitol, and found that when choosing from a list that included both positive and negative descriptors, they were most likely to describe them as “violent”: 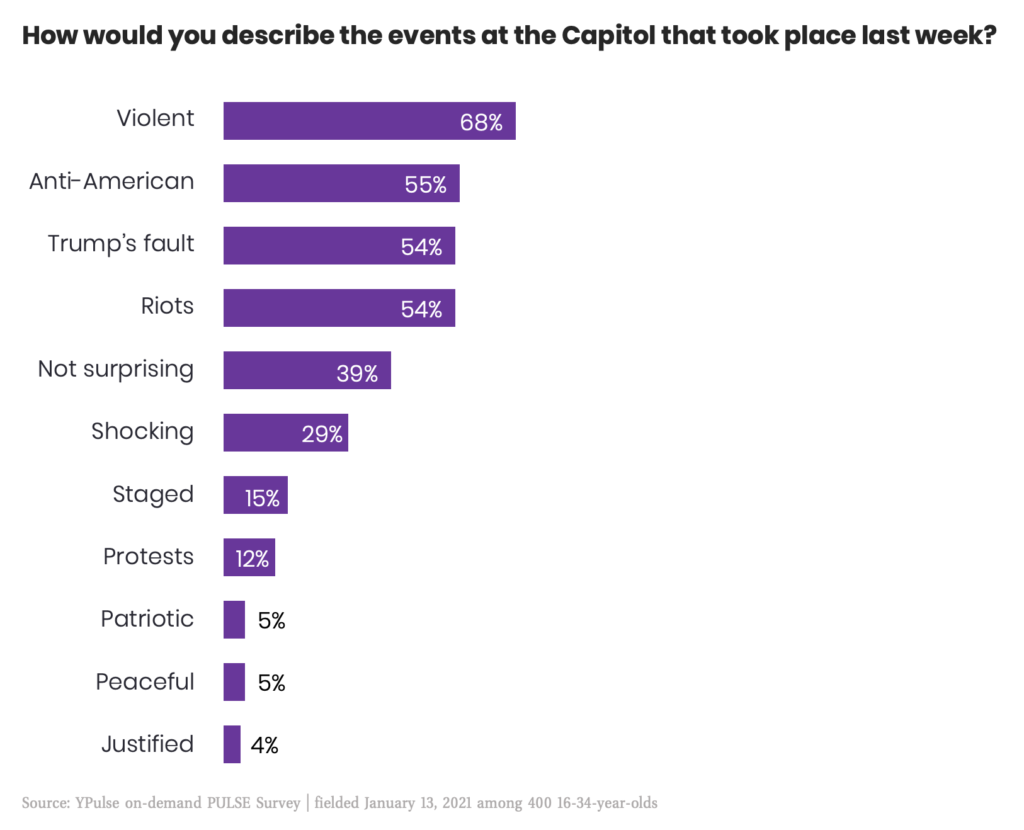 Our PULSE on-demand survey found that 68% of young people feel the events at the Capitol one wee ago were “violent,” and over half would describe them as “anti-American,” and “Trump’s fault.” Some also added a few of their own thoughts via comments, including “insurrection,” “terrorism,” “failed coup,” and “unbelievable.” Their overall feeling are not too surprising. We know that Gen Z and Millennials are more likely to call themselves Democrats than Republican, and that more planned to vote for Joe Biden than Donald Trump in the lead up to the election. But a few commented that their feelings on the events were more complicated—including one respondent who believed it was staged, and one who explained, “I believe that it shouldn’t have happened, but I believe it’s justified in that they thought they were fighting tyranny. that’s [sic] respectable, the problem is with Trump who told them that democracy was tyranny.”

But most young people don’t believe the events were justified (just 4% say they were) and they are far more likely to call them “riots” (54%) as opposed to “protests” (12%). Interestingly, they were also more likely to call the events “not surprising” (39%) than “shocking” (29%)—which speaks to their somewhat jaded political and world views. And our survey found that these events have further impacted their trust in government: 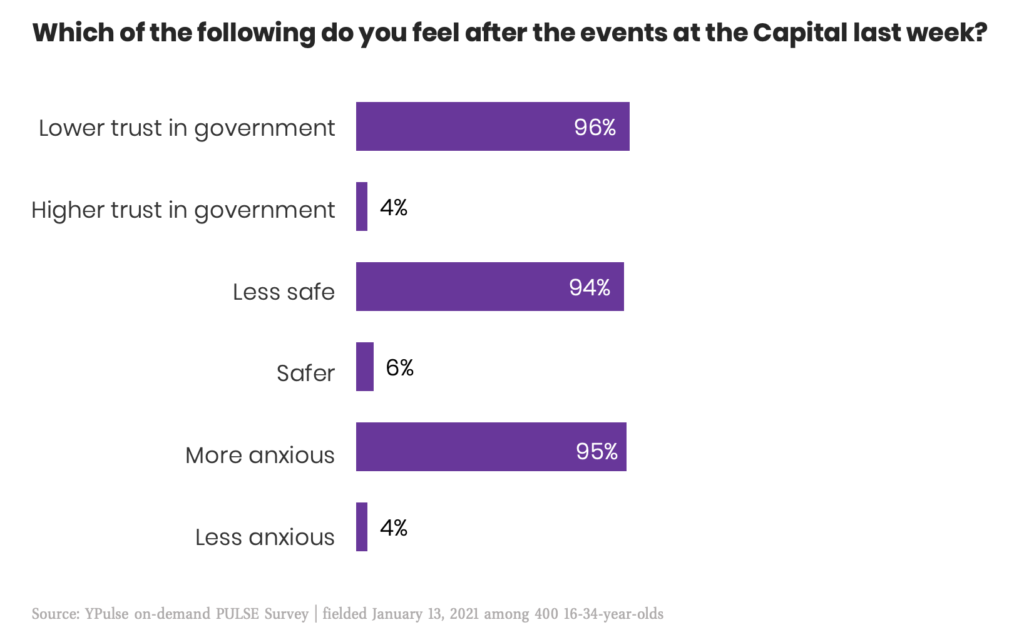 An overwhelming majority of Gen Z and Millennials say that the events at the Capitol last week made them feel lower trust in government, less safe, and more anxious. For young people, the last week has weakened their already failing trust in systems, which could impact their politics and their activism going forward. Their anxiety is not just general, but rooted in fears of violence and lack of protection:

When our PULSE survey asked 16-34-year-olds about police actions and further violence, it was clear that most believe that police on the scene did not do enough to stop the riots. The majority (68%) say they are worried about more violence occurring because of President Trump as well. So their feelings about Trump’s impeachment shouldn’t come as too much of a surprise either:

Three quarters of young people said they believed that President Trump should be impeached. This question was asked today as the hearings took place, but before the vote. Some commented that they supported impeachment so that Trump would not be able to run again in four years, and others felt that he has put people in danger and “needs to have consequences to preserve democracy.” Among the 26% who said that Trump should not be impeached, many were supporters of Trump. But some also expressed their belief that impeachment would only worsen things, with one commenting “I think he is guilty but this won’t do anything more than make people go crazy.” Others believe that impeachment is a waste of time and resources with only two weeks left in Trump’s term. As one person put it, “Why would we waste time trying to impeachment him when he is soon going to be out of office. We should be spending our time doing something more productive. I’ve seen worst tweets.”

But how do they feel about the other repercussions President Trump is facing – namely his suspension from multiple social media platforms?

Three quarters of young people support the decision to ban President Trump from social media, while a quarter tell us that “it’s not right.” Again, not all of those who chose the latter were necessarily Trump’s supporters. Many spoke about setting dangerous precedents, the growing power of big tech, and the importance of free speech. One female explained, “Censorship isn’t right to anyone,” while another commented, “I do not want Trump to be president but I also believe in freedom of speech.” A male teen told us that while he supported impeachment, he didn’t support the bans, saying, “Trump should be impeached for inciting a riot on the capitol building. However; I think big tech is gaining too much power when it comes to suppression of speach [sic.].” Among those who support his social media bans, public safety was the main theme of comments, with one male explaining, “The continued dissemination of misinformation is too problematic to continue to be unchecked; and if the government won’t take action individuals and companies need to do so.” And in the words of a female respondent, “I feel this way because I feel he is a danger to all people’s safety especially me and my loved ones and family with his beliefs. I feel he can and will try to start more problems.”

Finally, we asked young people how they feel about brands commenting on all of these historic events, and President Trump, in the wake of the riots:

After the riots in D.C. last week, select brands, like Ben & Jerry’s, immediately denounced the actions. Vox reports that a week later, even more brands have spoken out: AXE, Chevron, and the National Association of Manufacturers (who represent Exxon, Pfizer, and Toyota) are some of the companies who have issued public statements. Our PULSE survey today found that the majority (70%) of young people say that brands should make it clear that they don’t support President Trump after the riots, and they are more likely to feel this way than to say that brands should not make statements about the riots (30%).

These beliefs follow the trend that we’ve tracked among young consumers throughout 2020: They expect brands to make their views on important issues known. Our Not Waiting for the World to Change trend research found that 73% of 13-39-year-olds like it when a brand posts on social media about issues that matter to them, and 78% like it when brands share the ways that they are supporting a specific cause / issue in detail. YPulse also found that the expectations around brand involvement in causes and issues were raised in 2020, and they expect that brands will comment on hot button issues.