COVID killed daily commuting for half of young consumers—here are the real stats on their transportation shifts, and how they feel about it…

The events of 2020 have, among many things, completely upended Gen Z and Millennials’ daily routines. YPulse’s surveys show that nearly three quarters of young people are still quarantining because of Coronavirus—i.e. staying at home as much as possible, avoiding contact with others. Half of employed Millennials tell us they continue to work from home. Our research has found that half of high school students and the majority of college students are attending the fall semester online.

These new realities have in turn drastically shifted their transportation behavior—and their feelings about cars and more—a trend we’re exploring in-depth in our upcoming trend research Driving Forward, which will be released this week. With all that time at home they’re spending, there has been less driving for many—as well as a serious change in how many have a daily commute. Here’s the breakdown of how many Gen Z and Millennials are commuting less, or not at all, post-COVID: 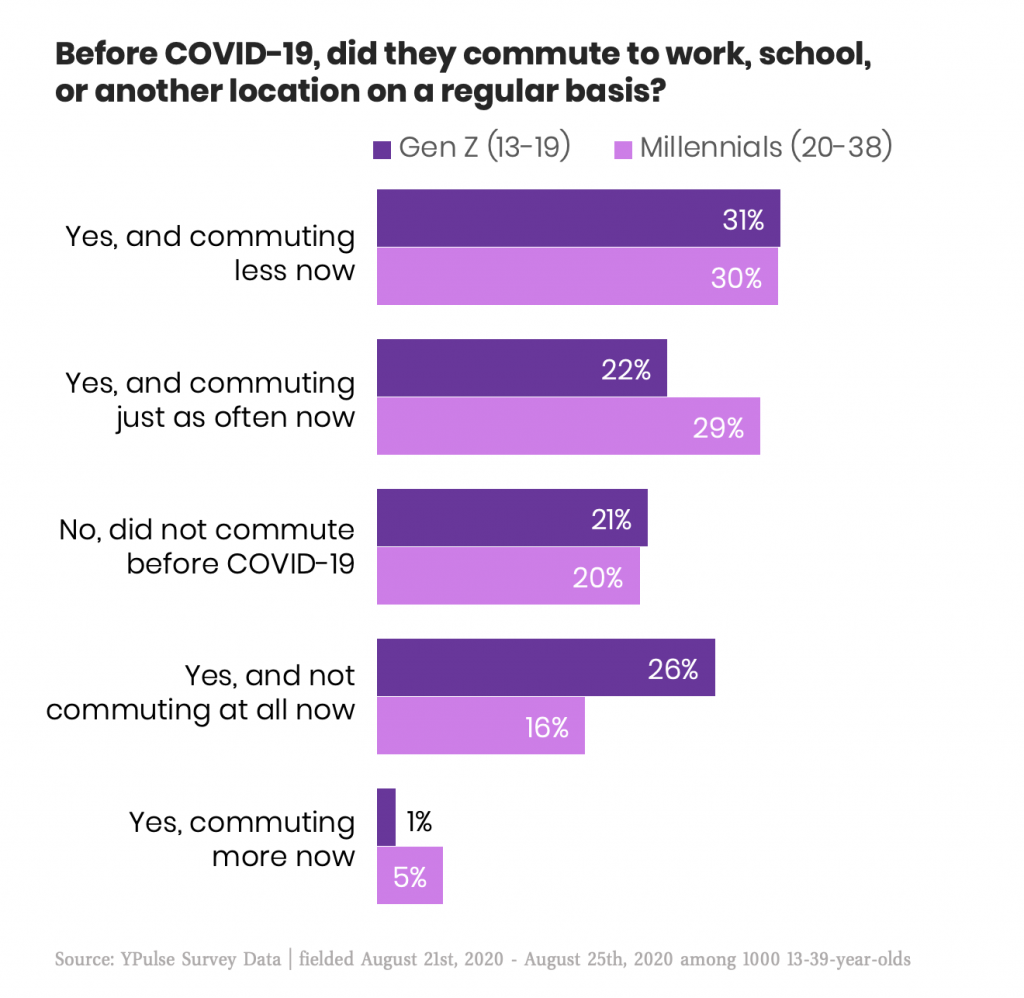 Before the pandemic hit, 79% of Gen Z and Millennials commuted to school or work—and that number has dropped to 61% post-COVID. But significantly, nearly half (48%) say that were commuting before COVID, but are now commuting less or not at all. Gen Z is more likely than Millennials to say they’re no longer commuting at all, but three in ten of both generations say they are commuting less. While this might have seemed like a positive early on in the pandemic (more time to sleep, less hassle, etc.) we found that the majority of young consumers who are commuting less or not at all actually miss those daily rituals: 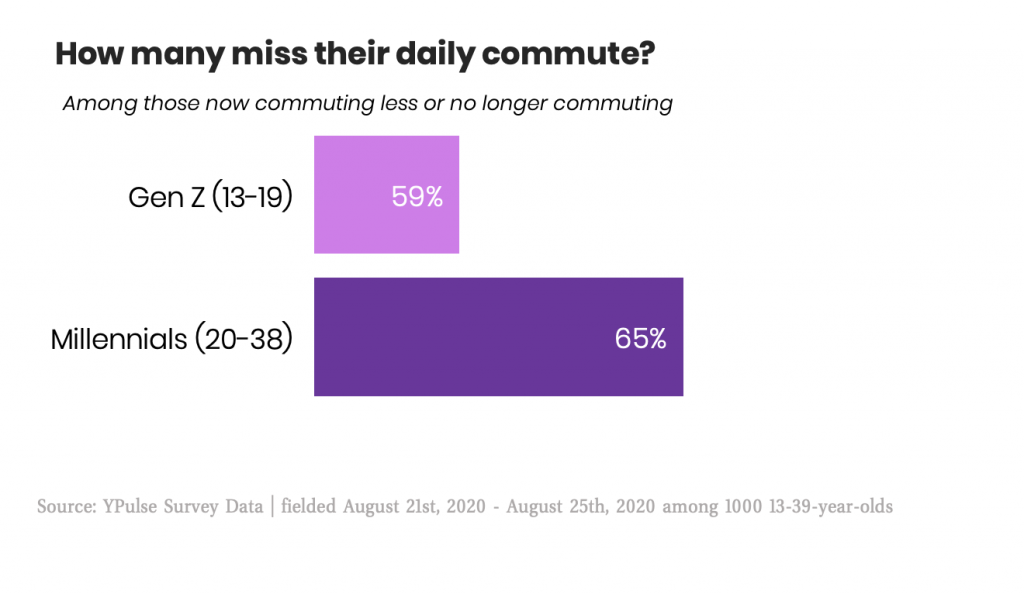 The majority of both Gen Z and Millennials miss their daily commutes. After quarantines began, the positive aspects of commuting began to become more clear, with data showing that Americans no longer commuting were most likely using that time to work even more, and losing out on time to think and disconnect from office stress.

It turns out, commutes were creating a vital buffer between work/school life and home life. In the wake of quarantines, The New York Times even published an advice article on how to “reclaim commute time,” explaining, “A commute helps you prepare for the day and decompress after a long workday.” Microsoft is taking this concept even further, integrating the idea of a “virtual commute” into their Teams product. According to VentureBeat, Microsoft is unveiling a “slew” of Teams features later this year and into 2021 to help address young people’s mental health, including virtual commutes and meditation breaks. With virtual commutes, users will be able to “take a step back” to organize their thoughts before and after work. According to a Microsoft Research study, the reflection period during commute times increases productivity by 12 to 15%. While the concept of a virtual commute might seem odd to some, there’s clearly a desire among young consumers to have that buffer and time back in their lives.

It’s not just mental health that’s impacted by commute loss. The activities that Gen Z and Millennials were filling their commutes with have also taken a hit. When we asked young people what they are doing less of now that they are not commuting as much as you use to, these were their top five responses: 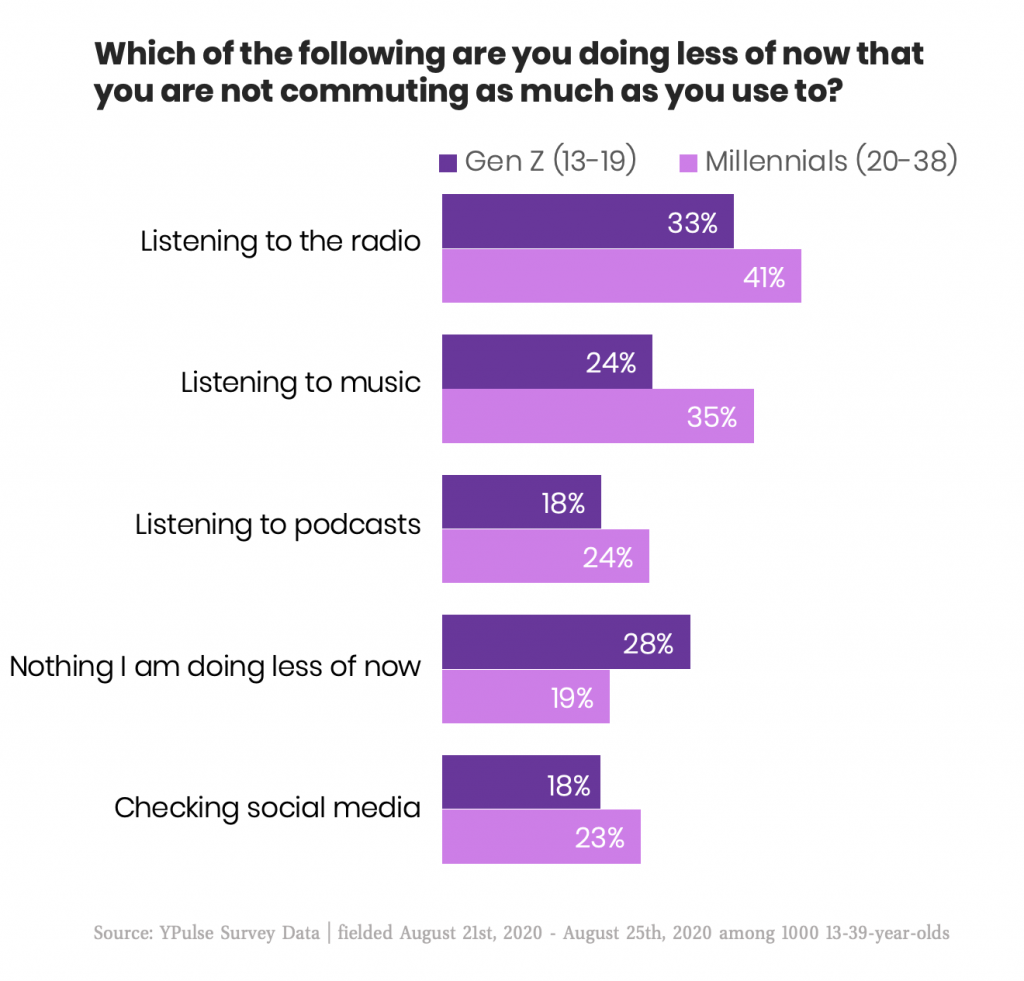 Gen Z and Millennial consumers who are commuting less or not at all are very likely listening to less music, and radio—something that impacts many brands. These responses echo the findings of our recent music listening report, which found that the pandemic and its mandated lockdowns have significantly shifted young consumers’ music consumption. Nasdaq included Sirius XM in their rundown of brands that are suffering as morning commutes are cut back, along with QSR players like Starbucks and McDonald’s, who aren’t seeing as many breakfast and coffee purchases. In the end, Gen Z and Millennials’ new transportation behaviors aren’t just reshaping their daily lives—they’re reshaping how many brands reach them.

If you want to learn more about this trend, register for our upcoming Driving Forward trend webinar!