How Many Young Viewers Will Pay to Watch Mulan at Home? 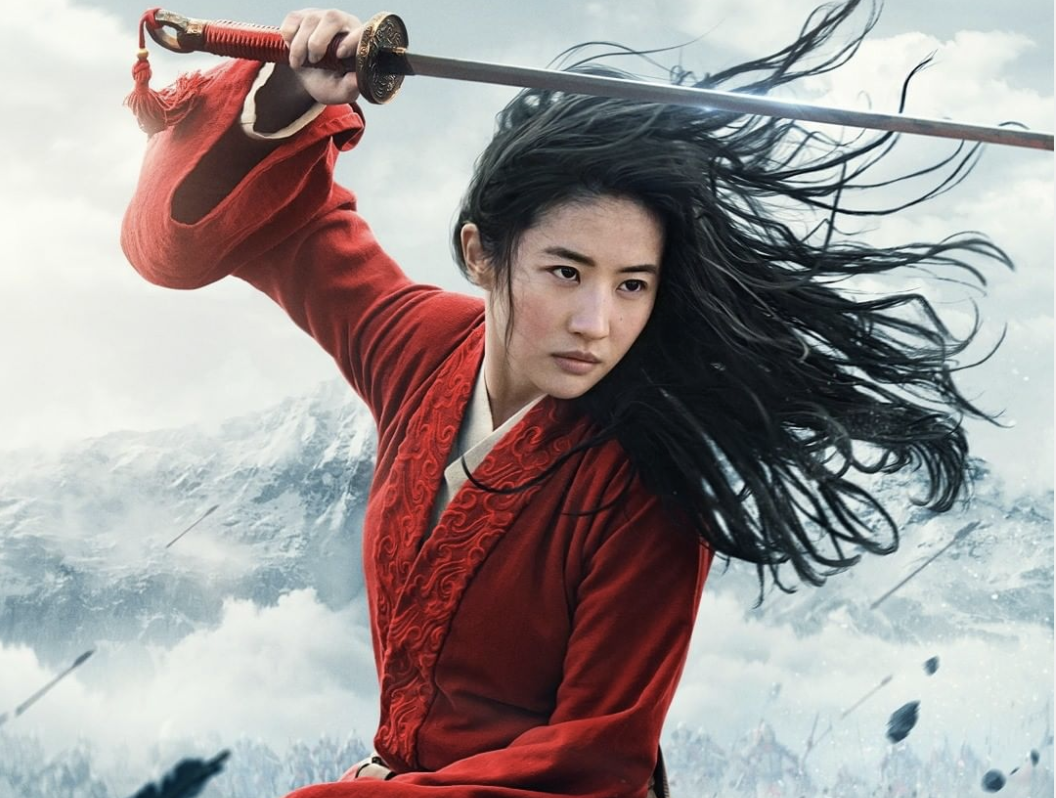 We asked young consumers if they plan to pay for the upcoming at-home release of Mulan, and a lot more about their feelings on paying to watch movies at home…

Starting this Friday, Disney’s new live action Mulan movie will be available to rent on Disney+ for $29.99, instead of premiering in theaters. More specifically, Disney+ subscribers will be able to pay a $29.99 fee in addition to their usual subscription to view the film on the new “Premier Access” part of the platform. Obviously, COVID is behind the release of the film in-homes instead of in-theaters. The New York Times reports that despite adding nearly 61 million subscribers to its platform in the last nine months, Disney has lost billions in revenue in the wake of COVID. Now, after the delay of Mulan’s theatrical release, they’re hoping to make up for lost costs by offering the film to rent on Disney+. Though they currently say this VOD is a “one-off,” there is speculation that it could become a norm if it performs well—and there is a lot of curiosity about how much of a success the release will be. CNN Business calls Mulan “a monumental moment for the industry, an experiment that will allow Hollywood’s biggest studio to peer into the future.” So, a pretty big deal.

Will viewers pay $29.99 on top of their subscriptions to access the movie? With the premier just a few days away, we turned to our PULSE on-demand research tool to find out just what young consumers are feeling about the release, and if they plan to pay to watch it. We also took the opportunity to ask all about their at-home movie rental behavior and attitudes. The results show that while there might be potential longevity in the at-home movie release model, most are not planning to pay to watch Mulan specifically: 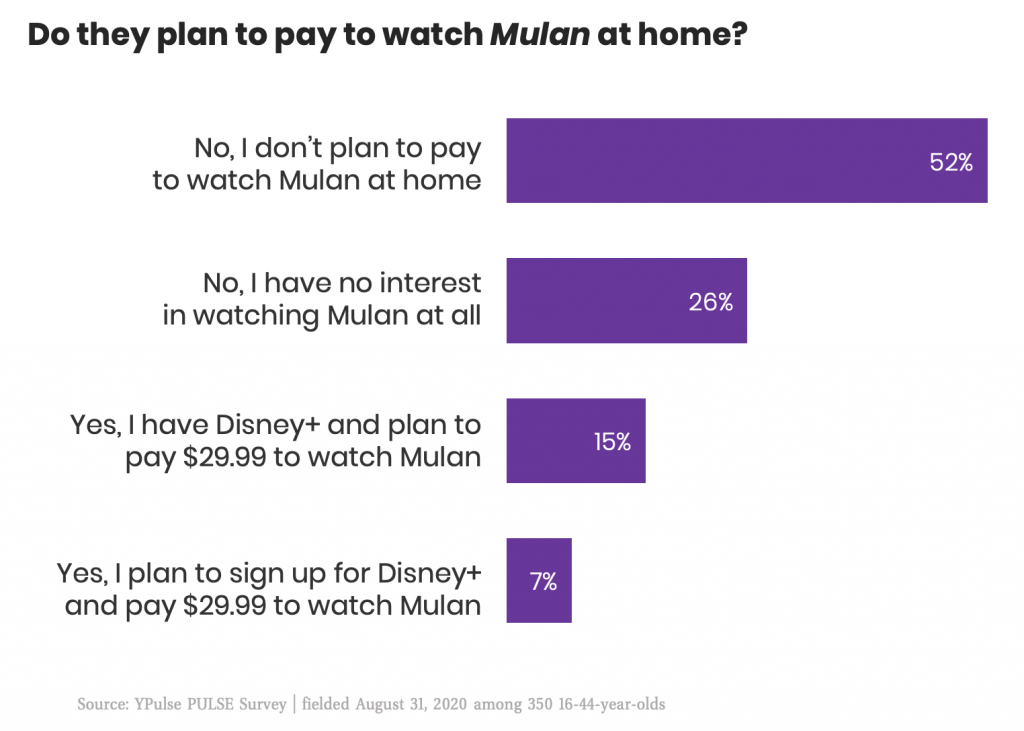 Today, 52% of 16-44-year-olds told YPulse that they don’t plan to watch Mulan at home, compared to 22% who say they plan to pay $29.99 to watch the movie. While the majority tell us that they won’t be paying to watch Mulan at home, 22% of this demographic is not insignificant. Revenue from the film might not match a theater release, but could be enough during trying times. And it is impressive that 7% say they will actually sign up for Disney+ and pay to watch Mulan—if these plans hold true, the release could actually lead to a subscription bump for the platform. That in itself could make releasing new movies at home worth their while, at least while theaters are still being avoided.

That said, there is clearly a reason that over half are interested in seeing Mulan but won’t pay to watch it at home. And when we used PULSE to look more closely at their feelings about the release, it became clear that the $29.99 price was likely behind their decision:

We included responses specifically addressing the $29.99 price point of Mulan in a series of statements about renting and streaming movies at home—and over half of respondents said they agreed that that was too high a price. Some respondents also left comments that specifically called out the price, including: “$30? This makes me angry with Disney.” Another wrote, “I would love to watch, but $30 plus your subscription fee is insane.”

Current Disney+ subscribers seem to feel the same way, with several commenting that they are not willing to pay extra, and will wait to watch it on the platform later when they don’t have to pay more. One respondent summed up their feelings with, “we should not be charged that much money to watch one movie on a streaming service that we are already paying for.”

Interestingly, we found some potential that if Disney was including something extra along with the rental for the $29.99 fee, more would be willing to pay. Over a quarter of respondents said they agree with the statement, “If I pay to watch a new movie at home instead of theaters I should get something extra (like a coupon for food delivery, or access to exclusive content).” It seems that higher price tags for at-home releases could be more palatable if media brands threw in additional perks. 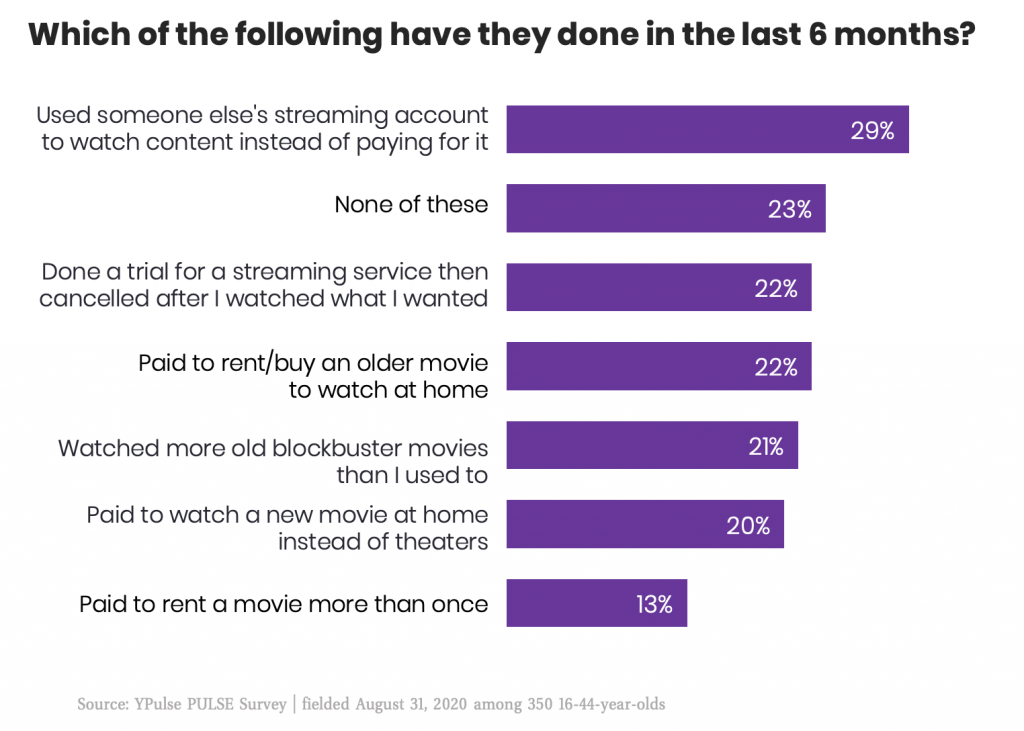 YPulse’s latest media consumption survey found that 19% of 18-39-year-olds have paid to watch a new movie at home instead of in theaters, and our PULSE survey today shows a similar number for 16-44-year-olds. It would make sense that the number of young consumers who are willing to pay for Mulan would be roughly the same as the number who have already purchased a new movie at home. It is possible that this is just the size of the prime paid at-home rental audience. Considering just 14% of U.S. adults reportedly visited a movie theater more than once a month in 2019, roughly 20% saying that they will rent a movie at home doesn’t look too shabby.

It’s also clear from this data that young consumers are well-practiced at finding ways to watch content without paying for it, with 29% saying they have used someone else’s streaming account to watch content instead of paying for it, and 22% saying they have done a trial for a streaming service then cancelled after watching what they wanted in the last six months. Considering these numbers it’s hardly a surprise that $29.99 for a single movie would not entice the majority.

But we could well see Disney’s Mulan release reported as a success. If nearly a quarter of young consumers plan to pay for the film, it could be a revenue and subscription boost, even if the price feels high for many.