Do Young Consumers Even Care About the Facebook Ad Boycott? 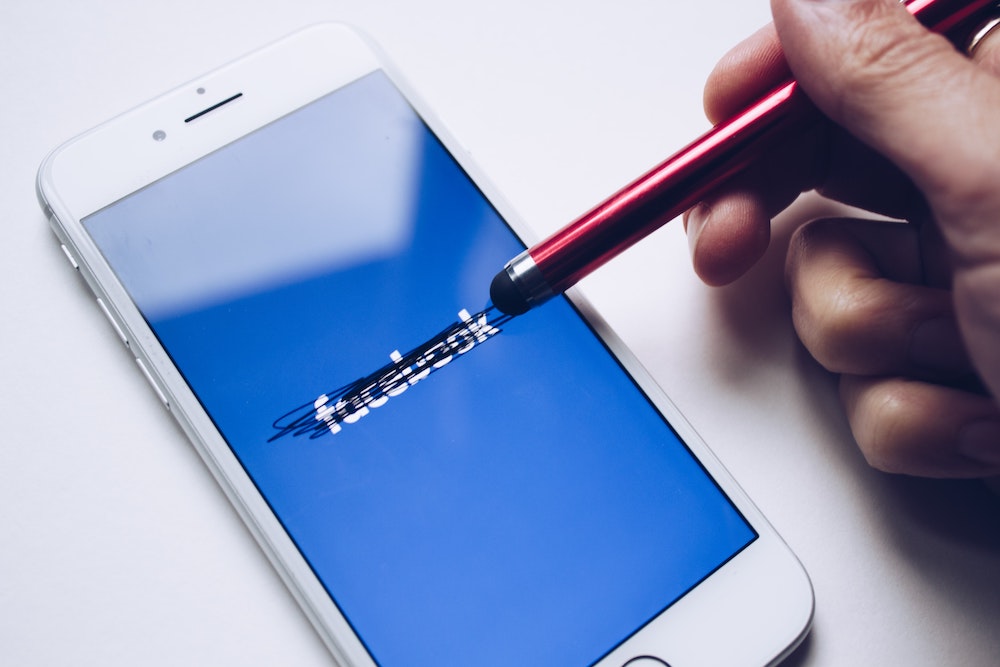 How much do Gen Z and Millennials actually know about the ad boycott shaking up marketing and social media—and do they care? We asked…

This month, the Stop Hate for Profit campaign called for companies to pull their advertising from Facebook. The group, a nonprofit advocacy organization composed of the NAACP, Color of Change, Free Press, Sleeping Giants, and the Anti-Defamation League, accuse the social network of “allow[ing] posts that call for violence against racism and police brutality protesters” and that Black users have reportedly been receiving threats. They also state that Facebook continues to allow misinformation about politics to remain online “in plain view,” have turned “a blind eye to blatant voter suppression,” and have employed companies “with ties to white supremacists as fact-checkers.” In June, they began to urge brands to pull advertising from the platform to demand change—and the participation has been strong.

The North Face was the first major brand to pull their ads. They announced that they were participating in the movement on Twitter stating “We’re in. We’re out, @Facebook.” Outdoor brands Patagonia and REI followed suit, and Ben & Jerry’s, known for its progressive track record, joined as well. Verizon is perhaps the biggest corporation to join the boycott—and the list only continued to grow. Stop Hate For Profit’s newest missive, a “Dear Mark” video directed at Zuckerberg himself, reports that over 1000 brands are participating in the boycott.

But while this campaign has had a major impact in the marketing world, it’s been unclear just how much it’s actually reaching Facebook users and the consumers who matter to Facebook. Stop Hate for Profit is encouraging individuals to sign a petition “to #StopHateforProfit and send a message to Facebook that profits will never be worth supporting hate, racism and misinformation.” But how many are aware of the campaign, and do they care? Will it impact their use of Facebook in the long term?

To find out, we turned to YPulse’s on-demand research tool PULSE, asking 16-34-year-old questions about the Facebook ad boycott and getting their real-time responses. We started with the basics: do young consumers even know about the boycott? 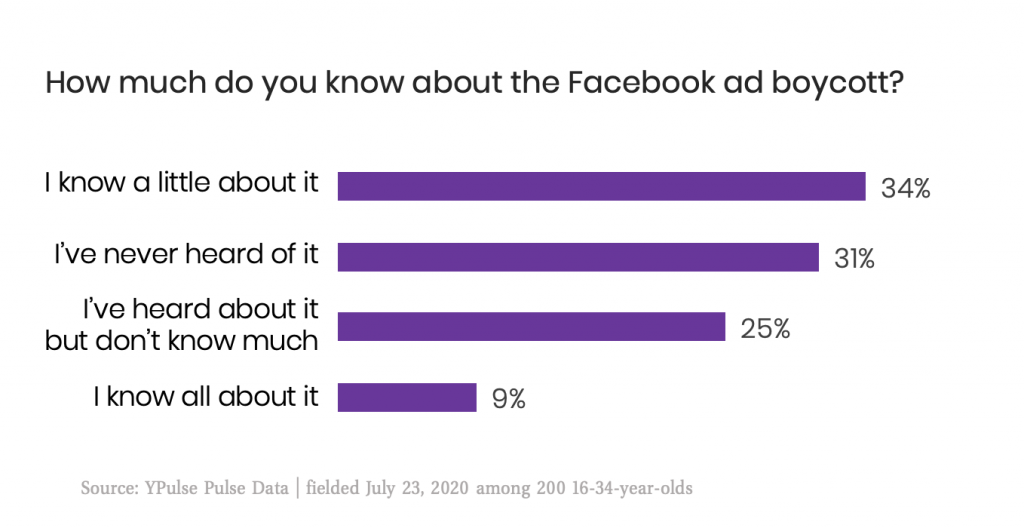 While very few 16-34-year-olds say they know “all about” the ad boycott, the overall awareness is high: 68% of 16-34-year-olds are aware of the Facebook ad boycott in some way, while only 31% have never heard of it. Though the campaign is mainly targeting businesses to participate, there has clearly been enough news about the boycott to get through to consumers. Now the next question is, do they care? We asked what they thought about brands who are participating in the boycott:

Overall, young consumers seems to be aligning with the brands who are participating in the boycott: 70% feel more positively about them, and almost half say they feel much more positively about them. Though young consumers are aware that brands rarely get involved in causes for purely altruistic purposes (67% of Gen Z and Millennials tell us brands connect to social causes as a cynical ploy to make more money) they still want them to get involved, and taking clear and direct action to make changes are well-received. Brands participating in the boycott are likely earning young consumers respect, but how about Facebook—is their reputation suffering?

Here it’s a more mixed bag, with 39% of 16-34-year-olds saying that they feel more negatively towards Facebook because of the boycott, and 41% saying it doesn’t change their opinion about Facebook. Of course, we should note that those who say it doesn’t change their opinion include both those who feel positively about the platform currently and those who already had negative feelings about it. While these responses aren’t completely bad news for Facebook, the platform could certainly suffer some reputation damage as a result of the boycott among the young consumers they are likely most interested in keeping engaged. Our most recent social media monitor survey shows that 66% of 13-39-year-olds overall use Facebook, but usage is much lower among younger consumers, with only 29% of 13-17-year-olds and 53% of 18-20-year-olds saying the use the platform. A reputation blow among these vulnerable demographics could be hard to come back from. 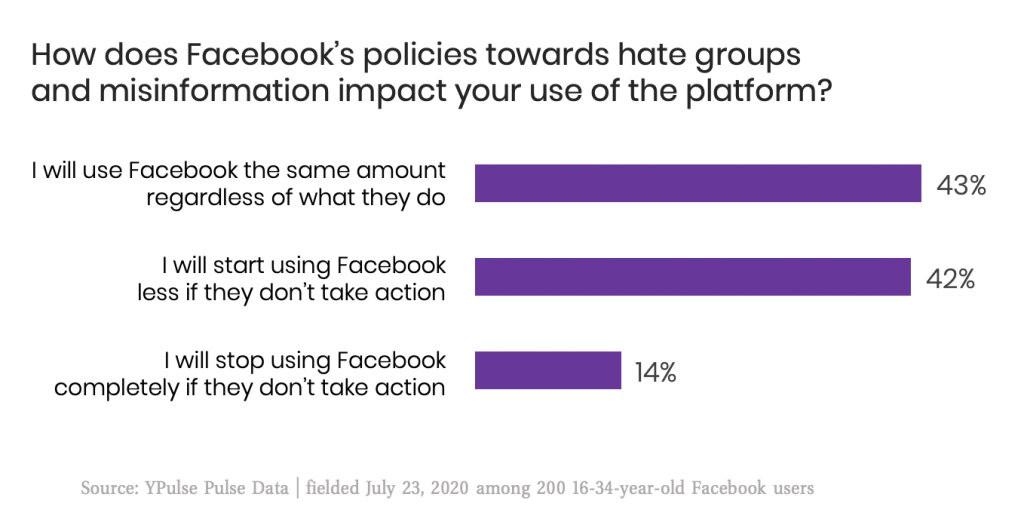 While 43% of young users say that they will use Facebook the same amount they do now regardless of what they do about misinformation and hate groups, 56% say that they will use the platform less or stop using it altogether if actions aren’t taken to address these issues. Of course, this is stated intent, and it’s likely that many would be tempted to continue to use the site regardless. But at the same time, these responses clearly show that young users want Facebook to make changes. Our last question shows that even more starkly: 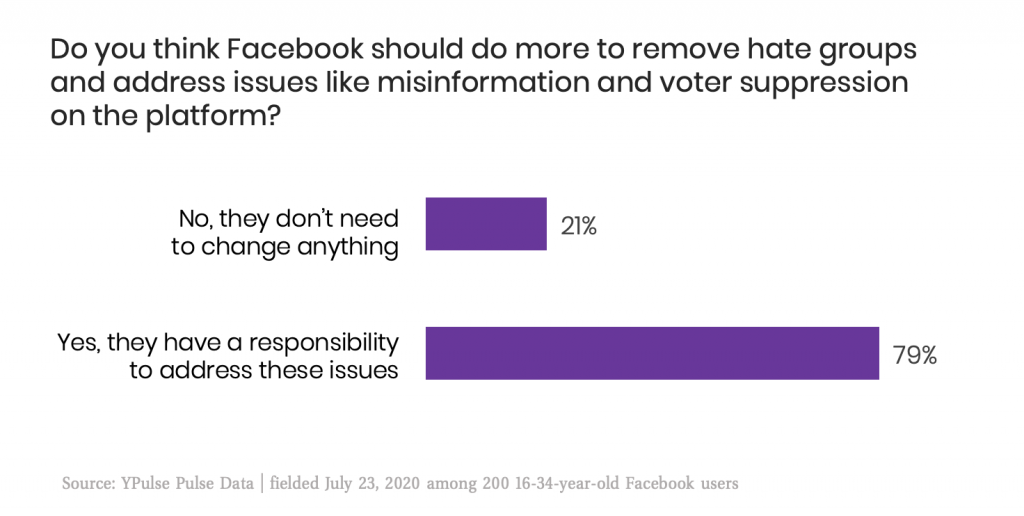 The large majority of young Facebook users say that Facebook has a responsibility to address issues like hate groups, misinformation, and voter suppression, the issues that Stop Hate For Profit is campaigning for the site to tackle.

Similarly, our 2020 social media behavior survey found that 74% of young consumers agree that social media platforms have a responsibility to prevent the spread of false information / fake news and 80% agree that social media platforms should do more to police and prevent cyber bullying. Young consumers have grown up using social media, and they believe that the platforms they spend time on should actively be monitoring content to keep hate at bay and keep their spaces safe. While the concrete results of the ad boycott are yet to be seen, it’s having an impact, at the very least on young consumers perceptions of Facebook and the brands participating. It could have even larger implications in the future.