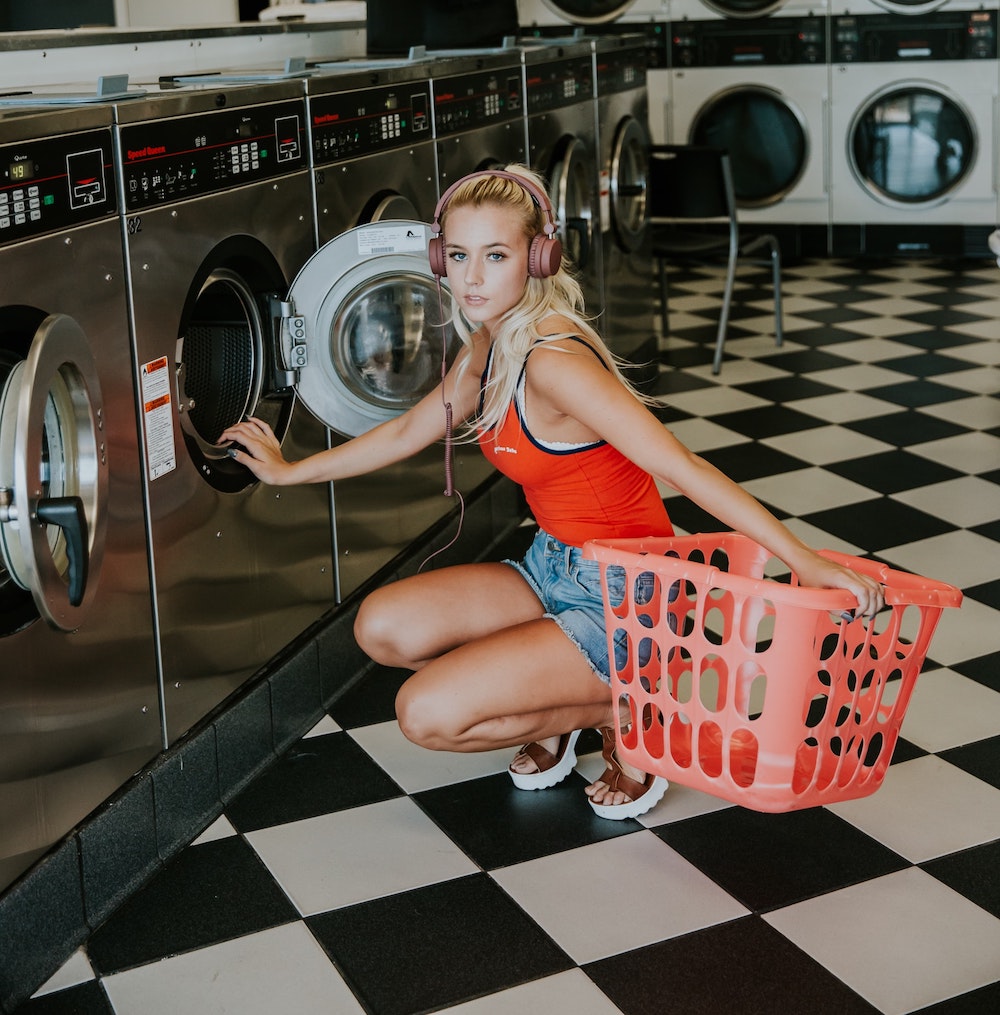 Millennials are lazy and can’t do household chores! At least, that’s what some headlines would have you believe. It seems every year a study (or two) is released saying that the generation is “useless” when it comes to household chores like washing dishes, doing laundry, and cooking without a microwave. Some even go so far as to claim that Millennials can’t change a lightbulb on their own. These headlines support the stereotype—fueled by a seemingly ongoing battle between Boomers and Millennials—that the younger generation is lazy and incapable. Often, this goes hand in hand with the belief that they expect their parents to do everything for them.

On the other side of the coin, some Millennials themselves say they’re not lazy, but instead so burnt out that they’re paralyzed by seemingly small tasks. This was the thesis presented in BuzzFeed’s now well-known piece on Millennial burn out, which argued the generation has been trained to “optimize time,” and have “internalized the idea that [they] should be working all the time.” As a result, errands and to-do list items like going to the post office, calling the doctor, taking things in for repairs—”seemingly high-effort, low-reward tasks”—seem daunting. It was also suggested that their “always on” attitude towards their careers is actually fueling disdain (or despair) for mundane adulting responsibilities. 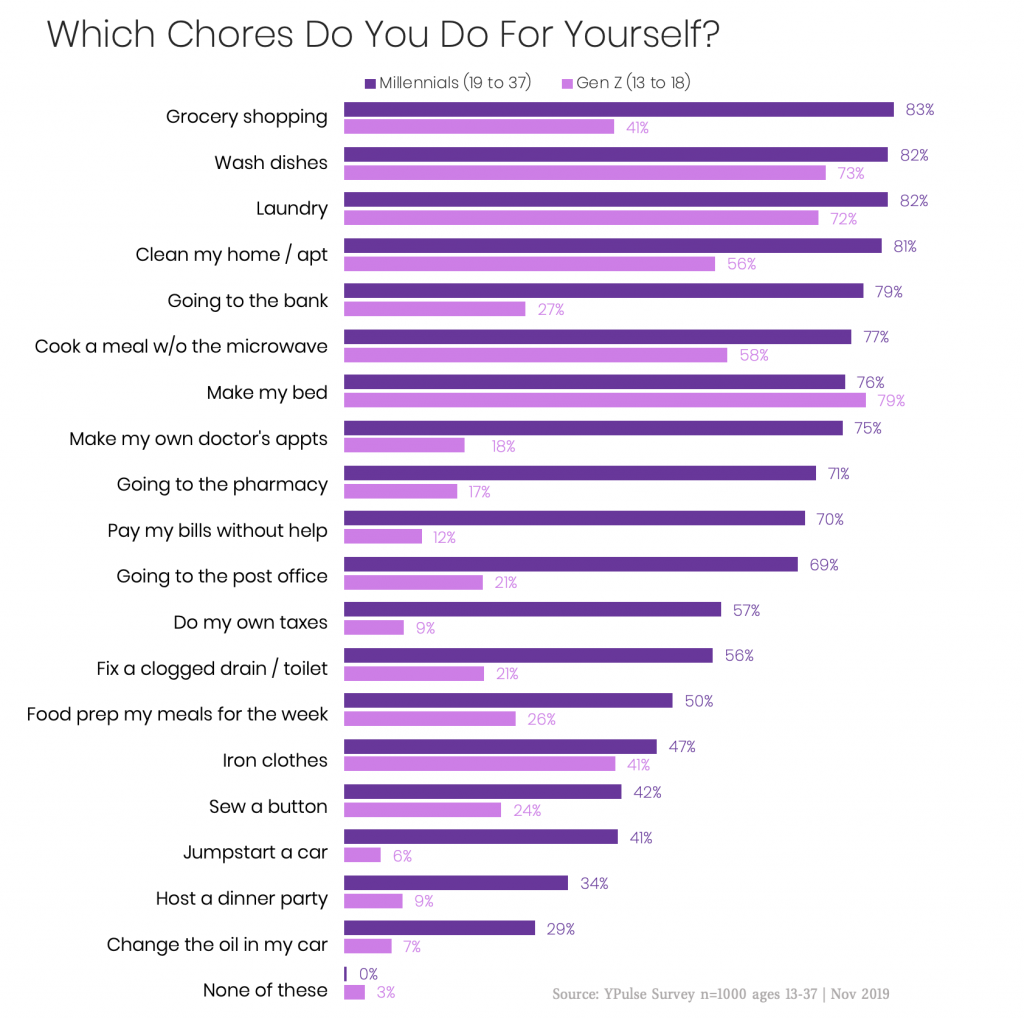 Over four in five 19-37-year-olds tell us that they do their own grocery shopping, wash dishes, do laundry, clean their homes or apartments, and (gasp!) even go to the bank. Almost across the board, Millennials were more likely to say that they’re doing household chores for themselves than Gen Z—which only makes sense considering we’re surveying Gen Z teens who likely still live at home with mom and dad. Looking at the household chores or life skills that Millennials are least likely to do, changing the oil in their car is at the bottom of the list, and less than half say they will sew a button, jumpstart a car, or host a dinner party. But for the most part, the data tells us that most Millennials are doing chores, and are capable of adulting. So what’s going on?

The disconnect could be that though the generation is doing household tasks, they’re less likely to be doing them than Boomers or Xers are. A new Bureau of Labor Statistics report found that on average, Millennials spend more time working, providing child care, and socializing than older consumers—but spend less time doing household chores. A 2018 survey by Porch.com found that Millennials cook fewer meals each week than older demos—and that fewer Millennials than other generations could perform basic kitchen tasks like poaching an egg. This year, another survey found that Millennials aren’t cleaning their bathrooms as often as Boomers.

Millennials are also more likely than other generations to outsource certain mundane tasks—including going to the grocery store. Criteo found that 43% of overall shoppers have had their groceries delivered via mail (i.e. Amazon), 36% by drivers (i.e. Amazon Fresh or Instacart)—and Gen Z & Millennials are the most likely generations to order by-driver delivery at 49%, as they continue to embrace time-saving alternatives to daily tasks and chores.

So, it could just be that while Millennials are capable of doing these chores, and are often doing them for themselves, they’re just more likely than older generations to outsource the parts of adulthood that they don’t want—or have time—to do all the time. As Slate pointed out last year, “The gig economy makes it easier for millennials to outsource chores, but that doesn’t mean they aren’t adults.”

But another look at the data did reveal that some Millennials are doing chores more than others: 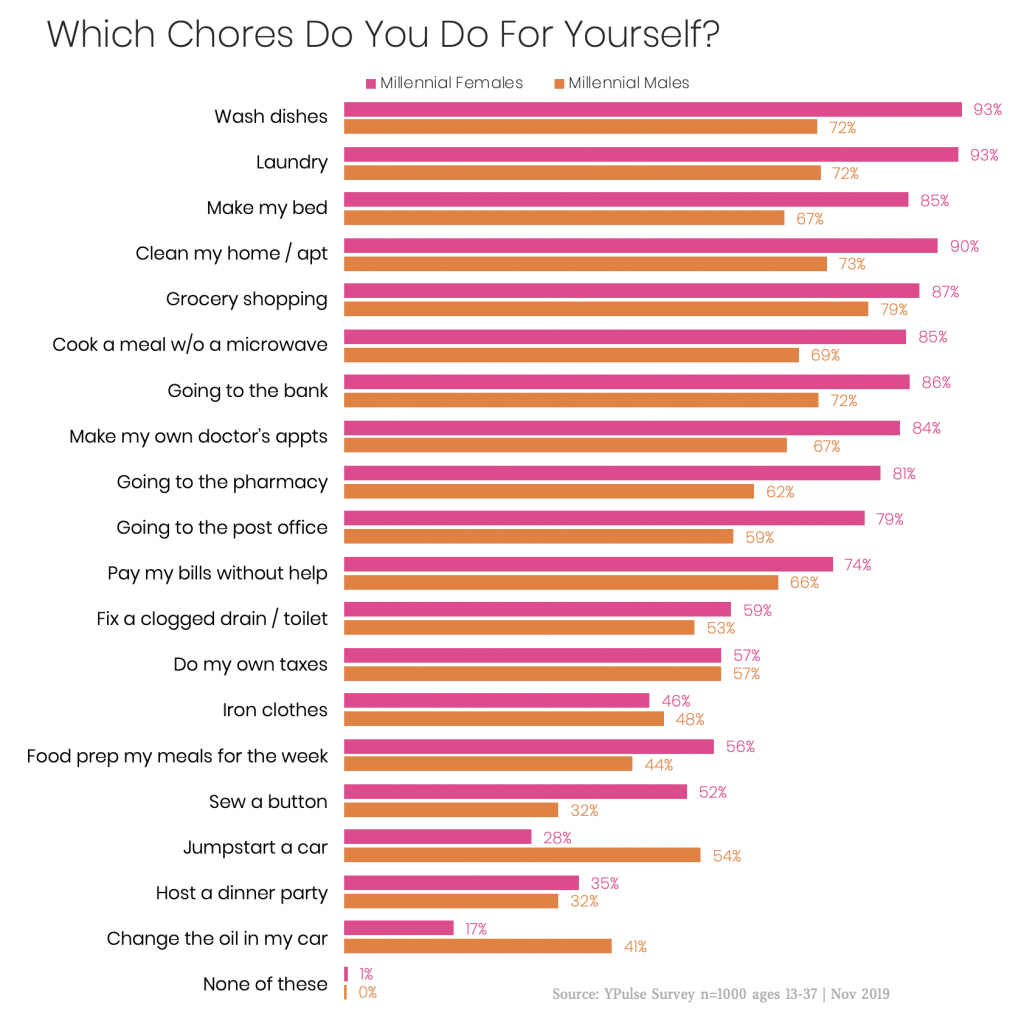 Millennial women are more likely than Millennial men to say that they’re doing household tasks like washing dishes, doing laundry, making their beds, and cleaning their homes. While the majority of Millennial men are doing these chores, they’re just not as likely to be doing them as females are. Despite the generation being vocal about their desire for more gender equality, it looks like there are still some very clear gender lines, and housework isn’t necessarily being shared equally.