According to YPulse’s most recent Causes, Charity & Activism survey, Gen Z and Millennials believe just as strongly as ever that brands have a responsibility to be involved in making the world a better place. Three quarters say that they actively seek out brands that support the causes they believe in—and two in five say they do so always or often.

What are the top causes they’re passionate about right now? We asked Gen Z and Millennials to tell us the issues that matter to them, from an expansive list of potential causes impacting their worlds. Here are the top 10 responses among each generation: 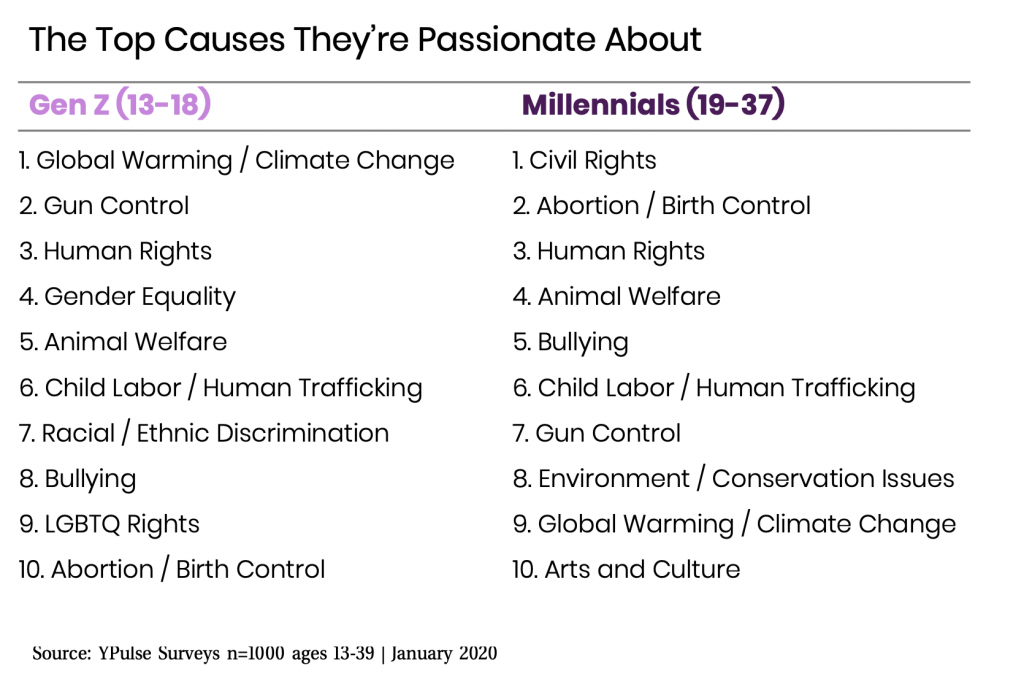 In the last year, it’s become clear that Gen Z is driving the conversation—and much of the activism—around climate change. In 2019, hundreds of thousands of students around the world skipped school in a massive Global Climate Change Strike to protest climate change inaction.  The event was inspired by 16-year-old Greta Thunberg’s once-solitary weekly strike in front of Sweden’s parliament and the #FridaysForFuture movement. The movement is only continuing in 2020. According to BuzzFeed, 17-year-old Jamie Margolin founded activist group Zero Hour and is planning a March 15th protest in the states so that cause-driven teens who aren’t old enough to vote can still have their voices heard. The movement is being compared to the Parkland teens’ March for Our Lives. Twitter has helped to give these teens a platform, and the page Solo But Not Alone—started by three young activists—is connecting even young activists in rural areas, spotlighting their efforts.

Let’s be clear: Millennials also care deeply about climate change. In fact, ahead of the 2020 election, YPulse found that climate change is the top issue driving Gen Z and Millennials’ votes, and in 2019 both Gen Z and Millennials told us that climate change is the top problem that their generations are facing. The ranking of many issues on this list is decided by just a few percentage points. But there are other causes that are looming large for them. Civil rights and abortion rights are immediate threats they’re feeling could impact their lives, which might be tipping the scales. We’ve seen this echoed in other research as well: A global survey by Amnesty International found that climate change is the top issue that young people feel is facing the world as a whole, but 18-to-25-year-olds in the U.S. were most likely to say violent crime, specifically gun violence and knife attacks, is the most important issue facing their country at 32%, followed by corruption at 25%.

But as we mentioned, just because they’re passionate about a cause doesn’t mean that young consumers believe that all brands should get involved in it. When we ask them the causes that they want brands to get involved in, bullying and climate change are the top responses among Gen Z, and bullying and animal welfare are the top responses among Millennials.

North America
3 Workplace Trends Gen Z Is Already Fueling
Gen Z is already making their mark on the workplace with these 3 trends… TL;...
Western Europe
4 Brands Tapping TikTok to Reach Young Europeans
Having a TikTok marketing strategy is a must for brands trying to reach young Europ...
North America
Did the Crypto Crash Scare Off Gen Z & Millennials?
Did the crypto crash change how Gen Z & Millennials feel about digital investin...