Disney+ & These 3 Charts Prove Millennials Are Far From Streaming Fatigue 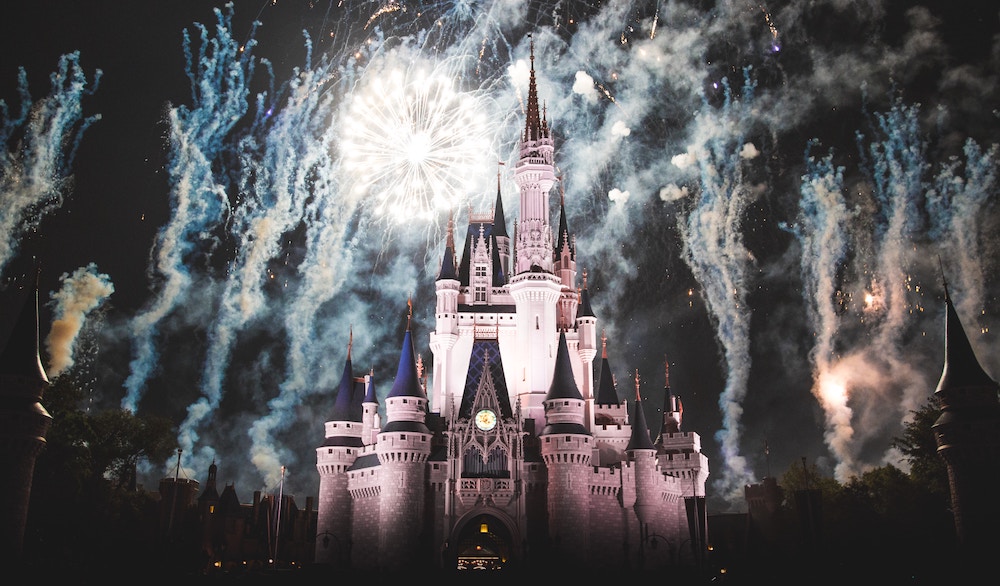 Young consumers are having a full on Disney+ party this week, with nostalgic series trending on social media, and so many signing up for the service the first day that it caused technical difficulties. In just one day after launch, the platform reached over 10 million sign-ups—outperforming expectations. It’s the real start of the streaming wars, and many are questions what this means for Millennial-beloved Netflix.

Some have also suggested that the onslaught of new SVOD players could cause frustration and fatigue among viewers, who may need to continue to buy new services to follow their favorite content. But YPulse’s data indicates that they’re not close to tiring of new services yet. In our recent TV and entertainment survey, we explored young viewers’ streaming attitudes and behaviors—and found 78% of 19-37-year-olds were paying for a streaming service. And before the launch of Disney+, the majority of Millennials were already paying for multiple video services: 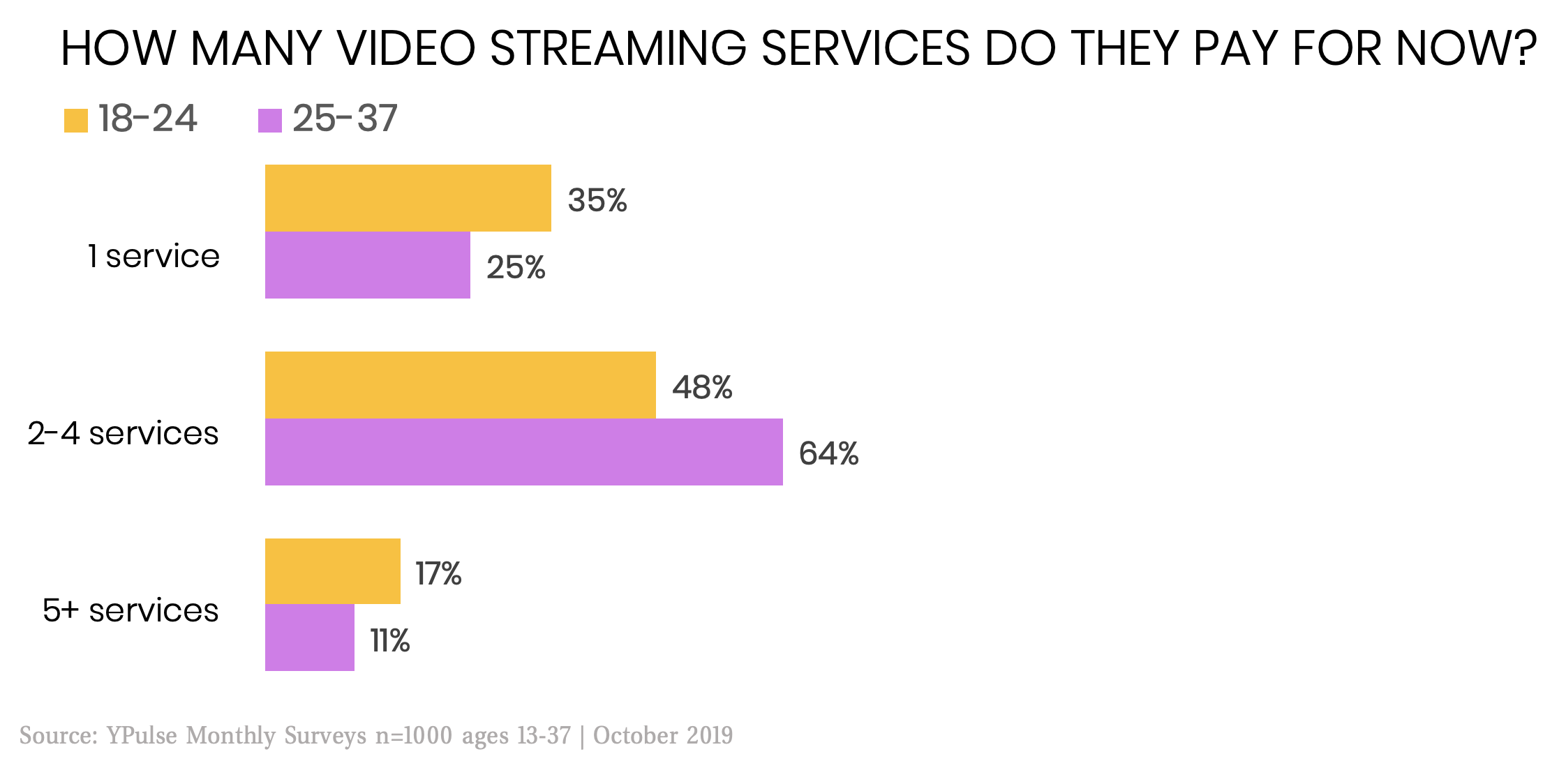 Among the 78% of Millennials who pay for a streaming service, the majority are already paying for more than one service, with 59% paying for two to five. Older Millennials are even more likely to pay for multiple services, with a full 64% of 25-37-year-olds streamers paying for two to four services. So before Disney+, Apple+, HBO Max, The Peacock, or any other newbies came on the scene, young viewers were ready to shell out for a variety of SVOD options. But were they feeling buyers’ remorse? We asked young consumers if they were paying for too many streaming services, and the majority told us no: 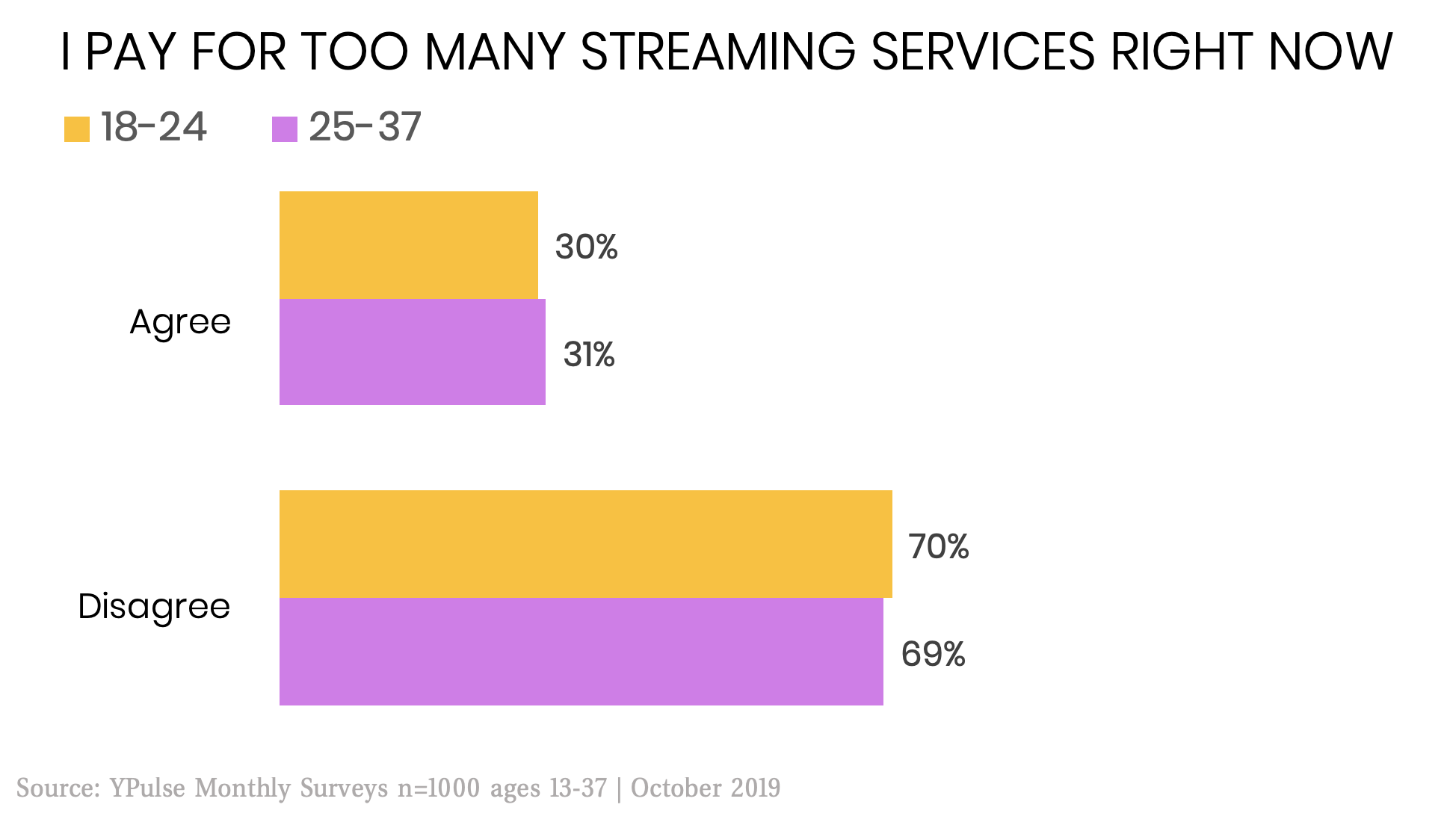 Seven in ten 19-37-year-olds disagree with the statement, “I pay for too many streaming services right now.” Their attitudes here indicated that they’re open to more platforms, which Disney+’s initial success shows as well. Over a month before Disney+ launched, 30% of Millennials told us they already planned to sign up, so clearly some are even eager to try out new offerings—even while they pay for multiple platforms.

This generation’s view of streaming is overwhelmingly positive. They’re willing to pay for multiple services because they believe they’re getting the best content there. When we ask young consumers if streaming services or cable have better shows and movies, 82% of Millennials say streaming services. (That number jumps to 91% among Gen Z, who are being raised on these platforms.) Millennials aren’t yet close to streaming service fatigue because right now, they think it’s all worth it: 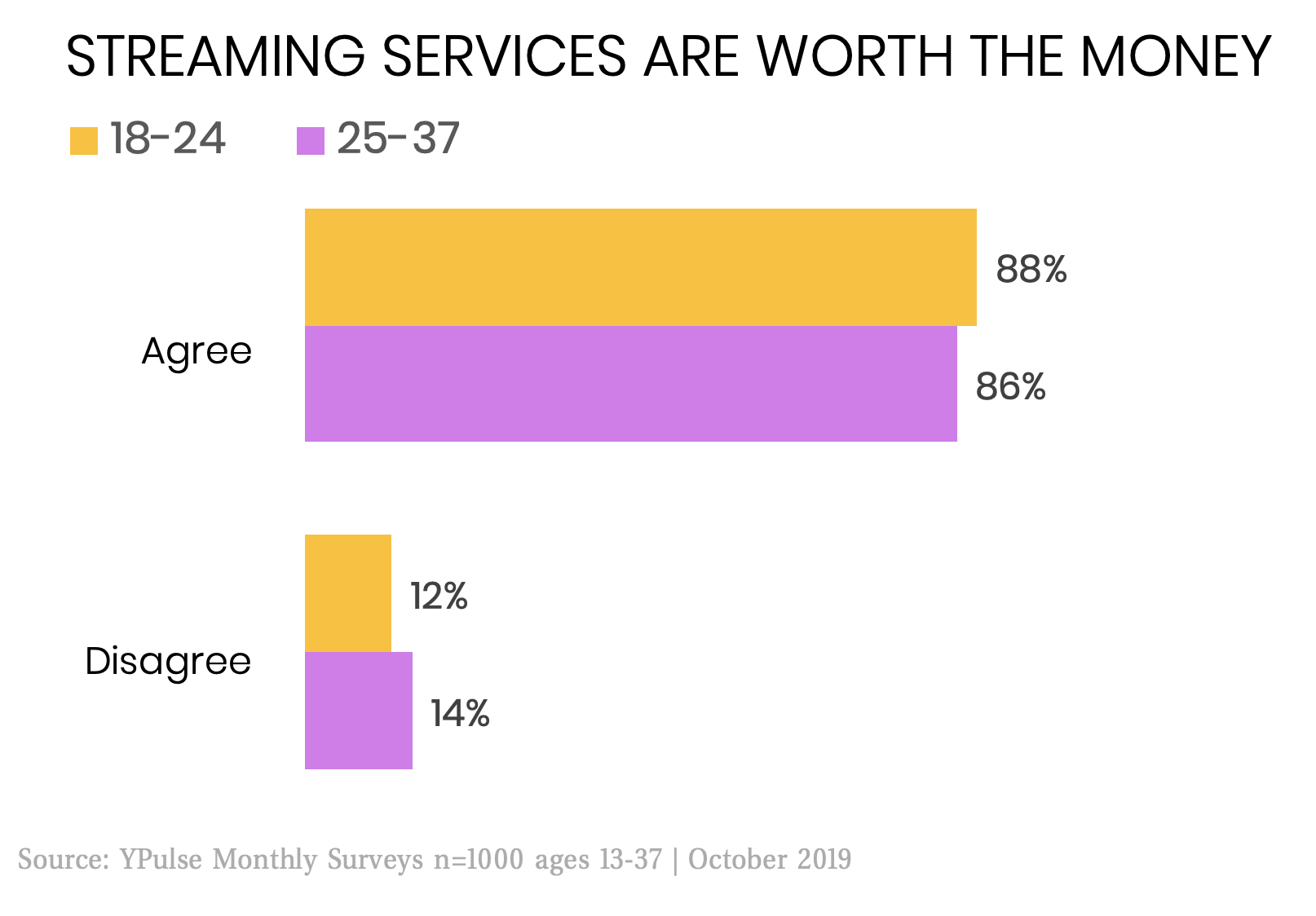 The overwhelming majority of Millennials tell us that streaming services are worth the money. Though this is a generation of cord cutters who haven’t looked back after ditching cable, it seems that the relative cost has not started to compare to what they left behind. It could also be that it was freedom of choice and the where-I-want-when-I-want control that SVODs provide that these viewers wanted all along—regardless of price.

We’ll continue to watch their attitudes about streaming as more competition vies for their attention, but at least for now it’s safe to say that there’s room in their streaming lives for more platforms.

As for Netflix, they’re taking it all in stride, with Chief Content Officer Ted Sarandos saying, “We figured at some point everybody would get into this, I was frankly surprised it took Disney and other people this long to go on this path.”