How Netflix Has a Hold on Millennials, In 4 Stats 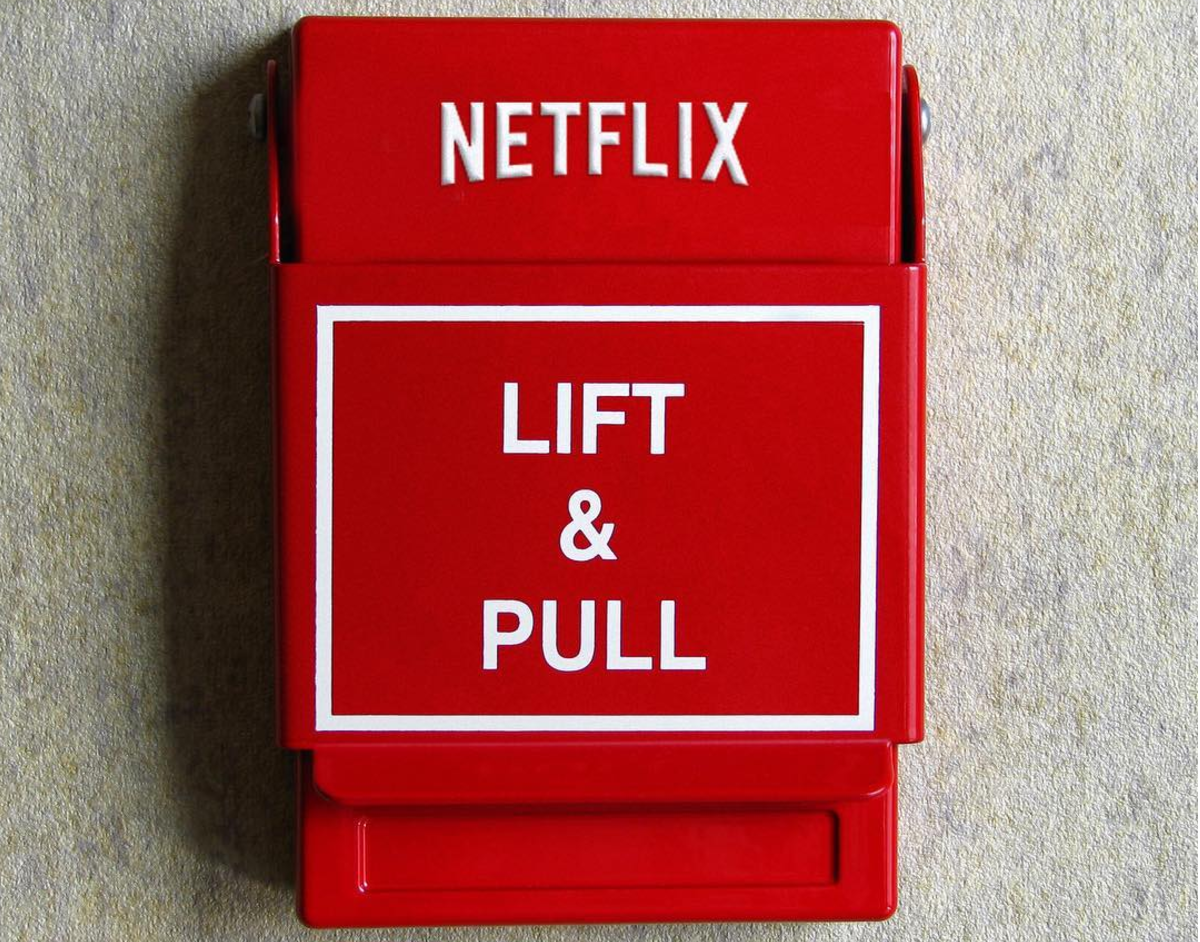 How dedicated are Millennial viewers to Netflix? These four stats show how devoted they’ve become to the streaming giant…

It’s become increasingly clear as we’ve kept tabs on Millennials’ media behavior and studied their binge-watching ways that, while they might like all streaming platforms to an extent, they’re in a serious relationship with Netflix. The brand has won their eyes and their hearts: Hub Entertainment Research recently asked U.S. consumers what TV sources they would keep if they could only have three, and found that 36% chose Netflix, followed by ABC at 20%, and then CBS at 18%. For 16-24-year-olds, Netflix is “even more indispensable,” with 56% choosing the streaming service as one of their three—almost three times more than their second choice, ABC at 19%. An analysis of the emotional bonds between brands and young consumers by independent agency MBLM found that Netflix was in the top three brands they’re bonded to—right under Disney and Amazon. (Whose love affair with the generation we’ve covered before.)

Here are four stats that illustrate just how strong a hold Netflix has on this influential viewing demographic: 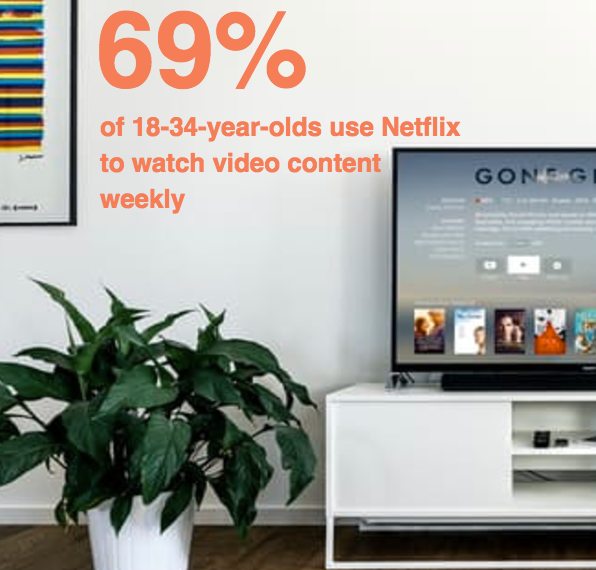 According to our most recent media consumption tracker, seven in ten Millennials say they use Netflix to watch video content weekly. That’s compared to 51% who report watching cable weekly—putting the streaming brand well ahead of traditional entertainment sources. Perhaps even more impressively, 63% of 18-34-year-olds report that they actually pay for an online streaming account (Netflix, Hulu)—and online streaming is the entertainment they spend on and most enjoy. Netflix isn’t just beating out cable, they’re winning the “steaming wars”—at least on home TV sets. comScore’s analysis of video streamed over Wi-Fi to televisions in U.S. homes found Netflix’s penetration is around 40%, while YouTube, the next most-used service, was less than 30%. Both Amazon and Hulu are far behind at below 20%, though the latter was found to have engagement rates on par with Netflix: “People who do use [them] use [them] a lot…Both services engage their users for more than 25 hours a month.” 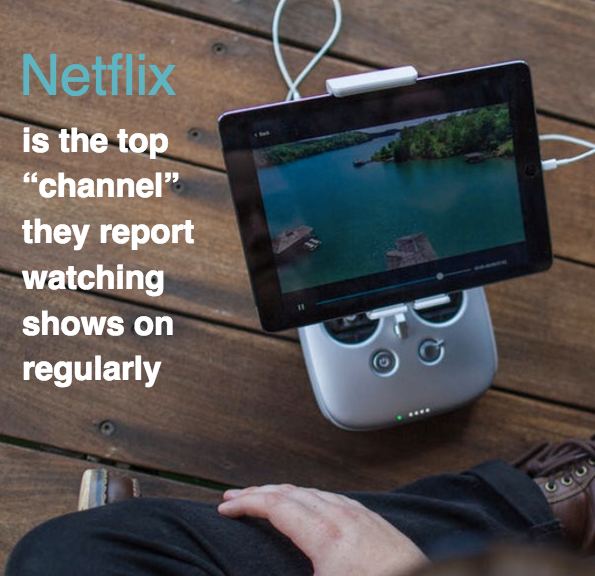 Netflix is the top “channel” they report watching shows on regularly.

Netflix has turned itself into a must-have for TV viewers. When we asked young consumers what channel they watch shows on regularly, Netflix easily beat out traditional cable networks, landing in the number one spot in the ranking of channels they watch. As we pointed out last week, the site is even playing an integral role in shaping the next generation of streamers: a recent survey of 100 parents found 82% in Netflix-only homes say their kids (under 10-years-old) don’t know what a commercial is, compared to 38% in homes with regular TV. That means they’re far more likely to be watching Netflix as a “channel” than they are to be watching networks with commercial breaks. 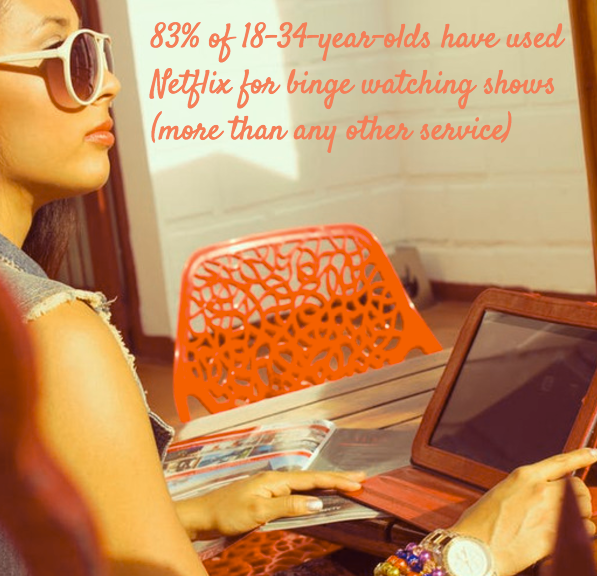 83% of 18-34-year-olds have used Netflix for binge watching shows (more than any other service).

Binge viewing has become a major part of young consumers’ entertainment behavior, and it’s impacting their preferences. Over eight in ten tell us that they have used Netflix for binge watching shows, and 64% say they use Netflix the most for binge watching. Netflix has embraced their binging behavior, producing memes and marketing celebrating that “one more episode” mentality, and of course releasing all their show episodes in bulk to allow for marathon viewing. In the battle of the binging services, Amazon and Hulu have nothing on Netflix. Utilizing independent technology to track viewership, Symphony Advanced Media put out a list of the 10 most popular original streaming shows of 2016 in the U.S.—and nine out of the ten belong to Netflix. Orange is the New Black and Stranger Things topped the ranking, and Hulu’s 11.26.63 was the only non-Netflix show to make the list. Which brings us to… 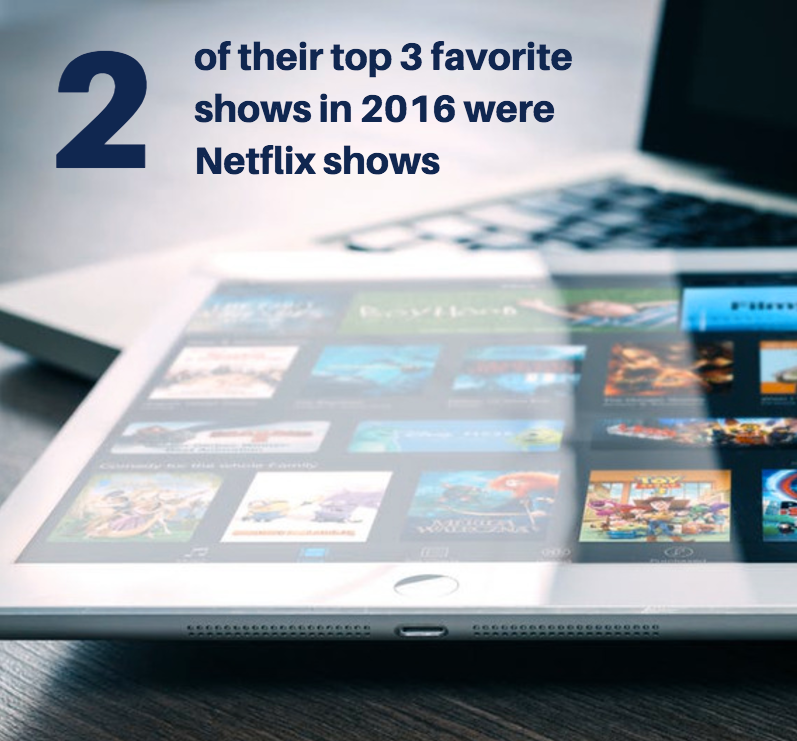 Young consumers’ favorite 2016 TV show overall was HBO’s Game of Thrones, followed by Netflix’s Orange is the New Black and Stranger Things. The fact that two of the top three favorite shows are from the streaming service says volumes about their relationship with the site—they rank Netflix content up there with high-end HBO fair, and above almost everything that they can find on TV. Netflix’s investment in original content is clearly paying off, and they’re not close to done yet. In December 2016, Polygon reported that they’re is gearing up for “global domination,” and doubling their number of original series in 2017. The streaming service announced plans to have 1,000 hours of original content by the end of next year—which they call a “relatively conservative” target. The service currently has 30 original series in development or available to stream currently, and intends to invest $6 billion on series and films, including more unscripted/reality content. We’ve also seen evidence that the new shows they create are generating more excitement than the new shows young consumers are seeing on cable: The top two shows they were excited to watch this past fall were Gilmore Girls: A Year In The Life and Marvel’s Luke Cage.