How Gen Z & Millennials Are Discovering Music on Social Media, In 2 Charts

Social media is now a major music discovery resource for young consumers, who are finding (and sharing) some of their favorite new artists and songs on the platforms they spend so much time on…

TikTok has become almost as famous for launching Gen Z music careers as it is for addictive video memes. Of course, Lil Nas X famously landed his record deal after taking a TikTok song viral. But The Ringer reports that Sueco the Child released a bass-heavy hit with an easy-to-lip-sync hook with the strategic aim of TikTok fame—then signed to Atlantic Records. And according to BuzzFeed News, Stunna Girl struck a record deal, thanks to her viral TikTok track “Runway.” The track became a favorite meme on the platform, in which users would time a sudden transformation to the dramatic chorus drop, with the hashtag #RunwayChallenge earning over three million videos, and one YouTube video featuring the track accruing over 4.4 million views.

But TikTok isn’t the only social media platform influencing young consumers’ music preferences or introducing them to new artists and songs. In fact, there are other platforms they’re even more likely to find new music on. Overall, we’ve seen social media’s position as a music discovery resource increase significantly in the last few years. In fact, in YPulse’s 2019 music survey, we found that it has now eclipsed most other sources of music discovery: 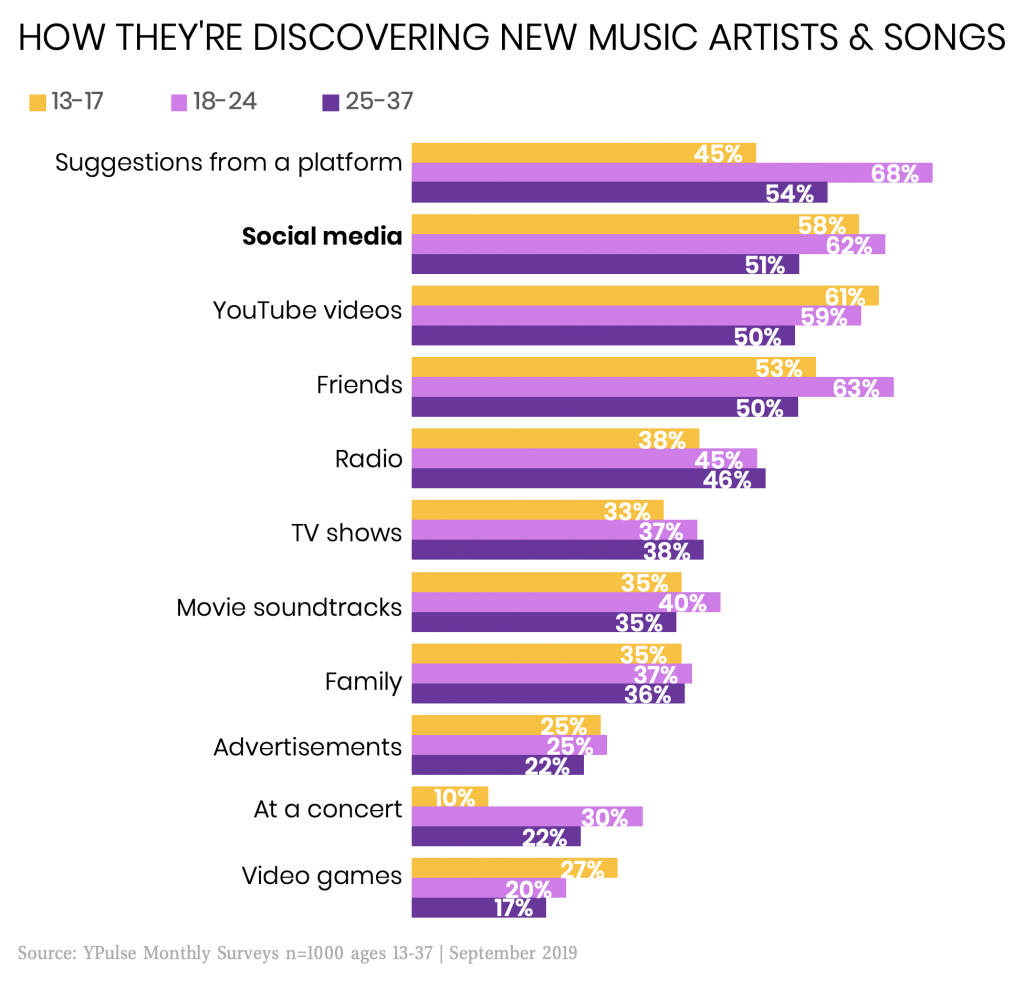 When we ask how they find out about new music artists or songs, social media beats out friends, radio, TV shows, movie soundtracks, family, and advertisements. Among 13-37-year-olds overall, social media is in a close race with streaming services and YouTube to be their top resource for music discovery, with 56% of 13-17-year-olds saying they discover new music and artists via streaming service suggestions, 55% saying social media, and 55% saying YouTube. Among Gen Z teens, it is the second biggest music discovery source, with YouTube being their number one source. Social platforms are also neck-and-neck with friends as 18-24-year-olds’ second biggest discovery source.

So, what social platforms are they most likely to discover music on? It’s not all about TikTok… 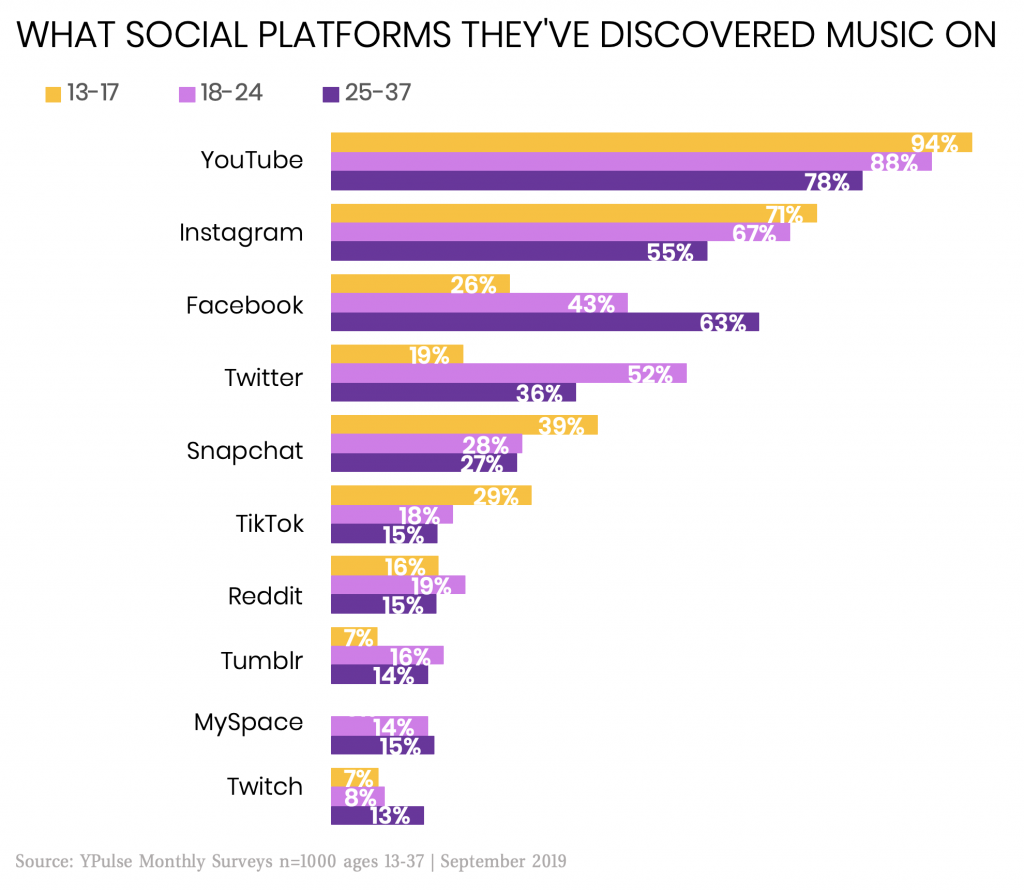 We included YouTube in this question, as it is a lead platform for discovery among all groups, but Instagram is the biggest social media site for music discovery after the video giant. Among those who have discovered music on a social platform, roughly seven in ten 13-24-year-olds discovered it on Instagram. (Among older Millennials, Facebook is the top social platform for music discovery.) Mashable reports that teens are fueling Instagram’s new music discovery status by posting lesser-known artists to their Instagram Stories, either pairing the songs with a picture of their own or letting the music stand alone. For instance, Maude Latour says about 100 people shared her song “Superfruit” to their stories—reaching a network of 100,000 and helping to spike her Spotify streams to 250,000. Music on Instagram is today’s teens’ version of a band shirt: it’s a way to identify themselves and share their passion with their friends.

Teens are the most likely age group to discover new music on Instagram—and are also more likely than 18-37-year-olds to discover new artists and songs on Snapchat and, yes, TikTok. The latter platform only plans on going deeper into the music scene, with a streaming service reportedly in the works.

North America
Pretty Much Everyone Is Playing Wordle on The Viral List
Wordle (no, it’s not an app) is the new Words With Friends, the Golden Globes Awards ...
Western Europe
How Young Europeans Are Following Pop Culture, in 2 Charts
We asked Gen Z and Millennials in Western Europe where they're getting their p...
North America
Murder, Makeup, & Tea: 5 Podcasts Gen Z & Millennials Are Listening To
We asked Gen Z and Millennials what their favorite podcasts are, and their response...