How Millennial Parents Are Shopping for the Holidays, In 3 Charts 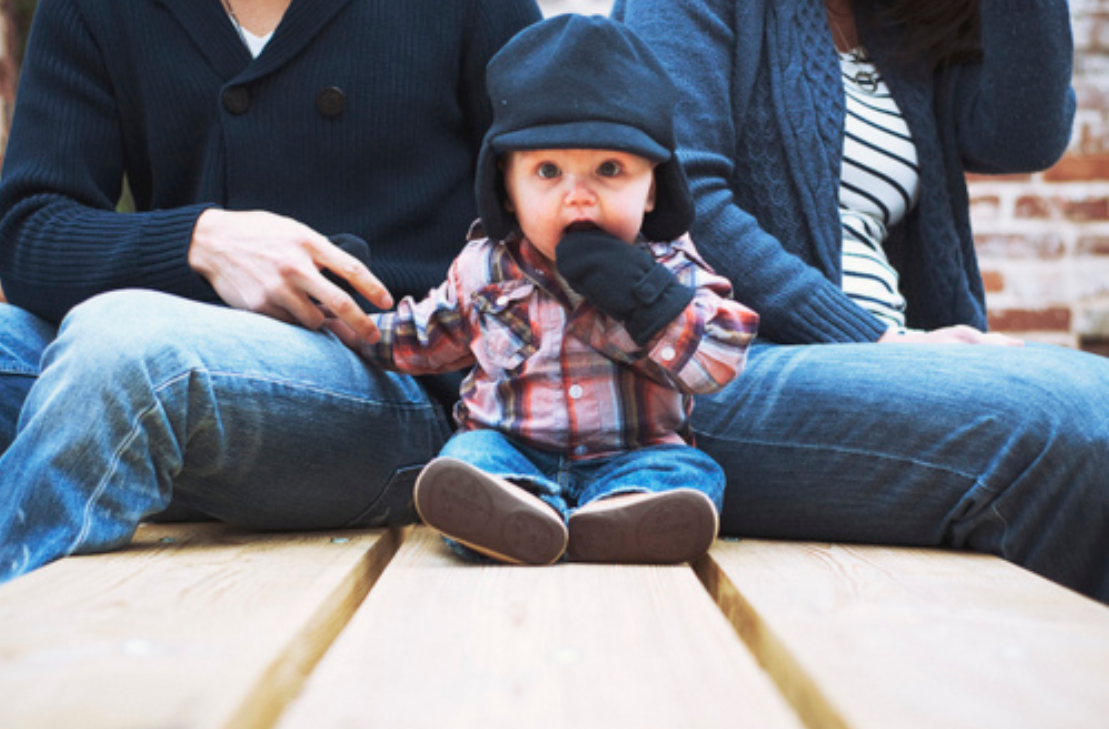 Millennial parents are now wielding some serious holiday shopping power—but where are they choosing to buy gifts, and what are they looking for?

This Thanksgiving holiday weekend shattered shopping records—and toys were a major part of the retail-mania. Thanksgiving Day online sales rose nearly 29%, according to Adobe, and the rest of the weekend followed suit, with Black Friday’s online sales surging 23.6% and Cyber Monday raking in $7.9 billion, “making it the single largest shopping day in U.S. history.” Amazon reports that consumers bought over 18 million toys on both Black Friday and Cyber Monday—and while we are sure that Millennials were buying some toys for themselves or other grown-ups, Millennial parents were clearly also out (and online) in full force buying gifts for their kids. Over half of 30-36-year-olds currently have kids—meaning this generation of parents is influencing holiday retail in a major way.

According to our recent survey on holiday shopping plans, Millennial parents are a shopping force to be reckoned with. While they’re more likely than their non-parent peers to say they have a holiday shopping budget in mind, their estimated spending on gifts far exceeds those without kids, with Millennial parents estimating they’ll spend almost $600 on gifts for others this year. Not surprisingly, Millennial parents are more likely to be buying gifts for their kids than anyone else in their lives—including their significant others. To get a sense of where this powerful group will be wielding their significant spending this year, we dug further into our holiday shopping survey data, to find out where exactly they plan to shop—and what they plan to buy: 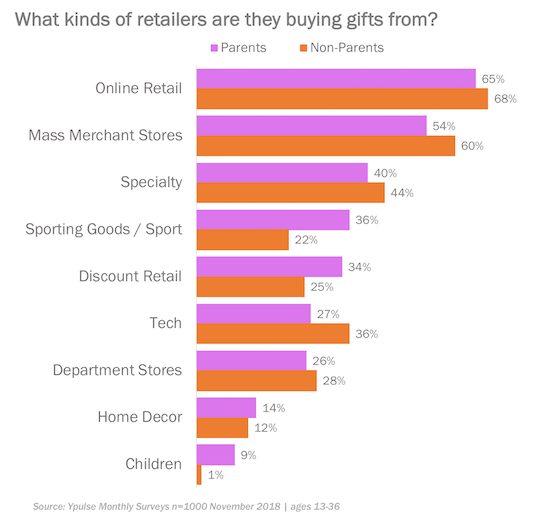 We’ll start with the kind of retailers parents plan to buy from. Overall, online retailers win out with this group, and they’re almost as likely to be shopping online for holiday gifts as their non-parent peers. But there are some differences between these groups as well. Millennial parents are far more likely than non-parents to plan to shop at sporting good/sport stores and discount retailers. Interestingly, though we know that they’re shopping for plenty of gifts for their kids, children’s retailers (like Carter’s and The Children’s Place) are not as popular shopping destinations among Millennial parents as larger retailers—likely because they’re looking to shop for multiple people at once, and are hoping for a one-stop-shop experience whenever possible. So where specifically will they be bringing their budgets? 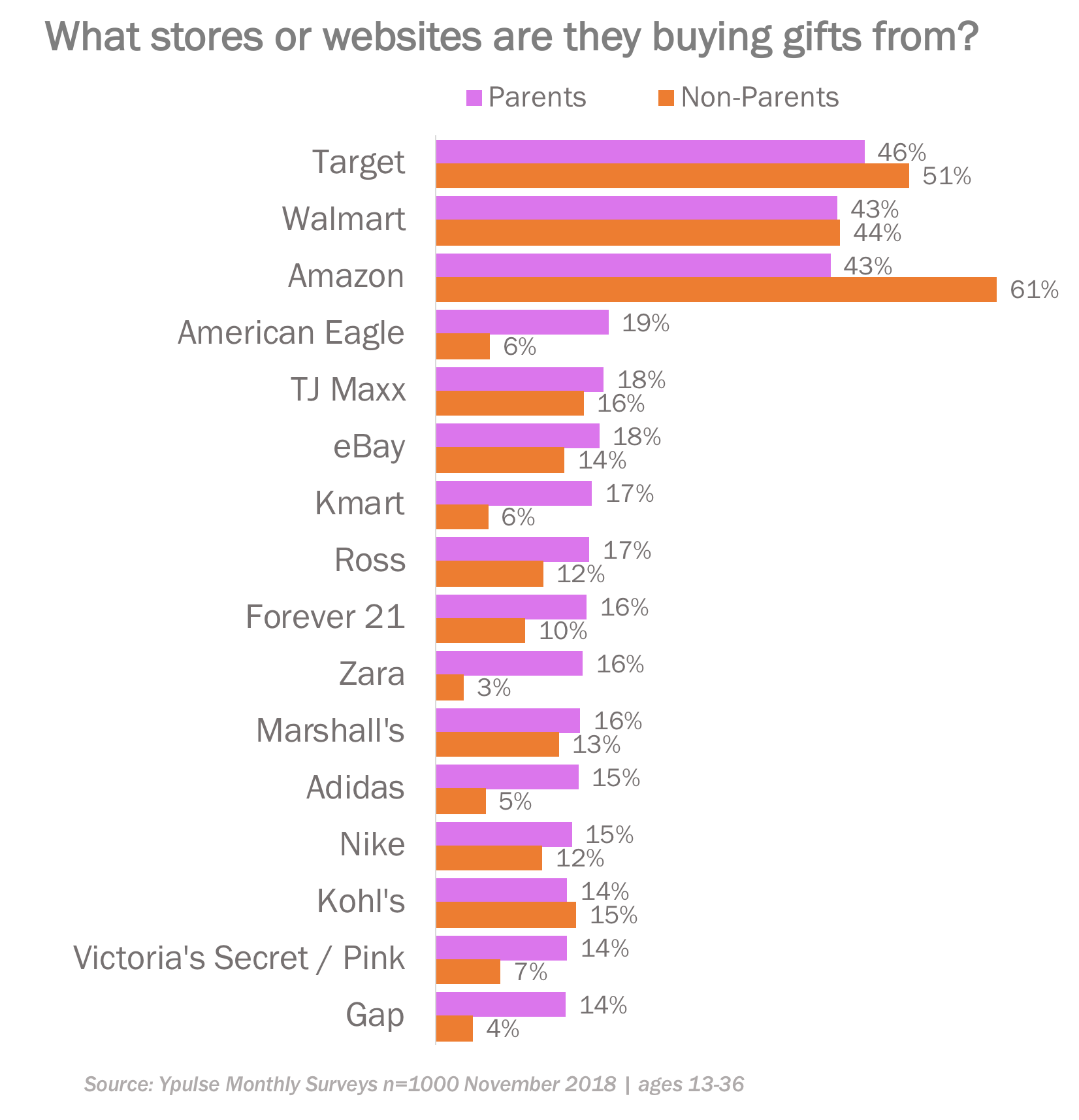 Looking more specifically at the stores and sites Millennial parents plan to buy from, Target, Walmart, and Amazon are at the top of the list. (Note: the above shows just the top 16 retailers this group plans to shop at, from a much larger ranking.) While non-parents are more likely than Millennial parents to plan to shop on Amazon, parents are more likely than non-parents to say they’ll be buying gifts from a range of fashion retailers—both discount and others. This makes sense when we look at what exactly they’re planning to give as gifts: 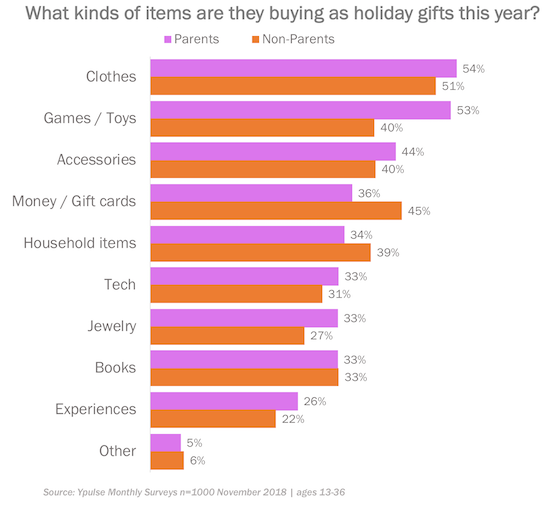 Clothing is at the top of the list of items that Millennial parents plan to buy as presents for the holidays this year, followed by games/toys, and accessories. Interestingly, these parents are less likely than their non-parent peers to plan on giving gift cards or money—potentially because their children are still quite young. The majority have kids under nine-years-old, so physical gifts to put under the tree or elsewhere still trump cash.