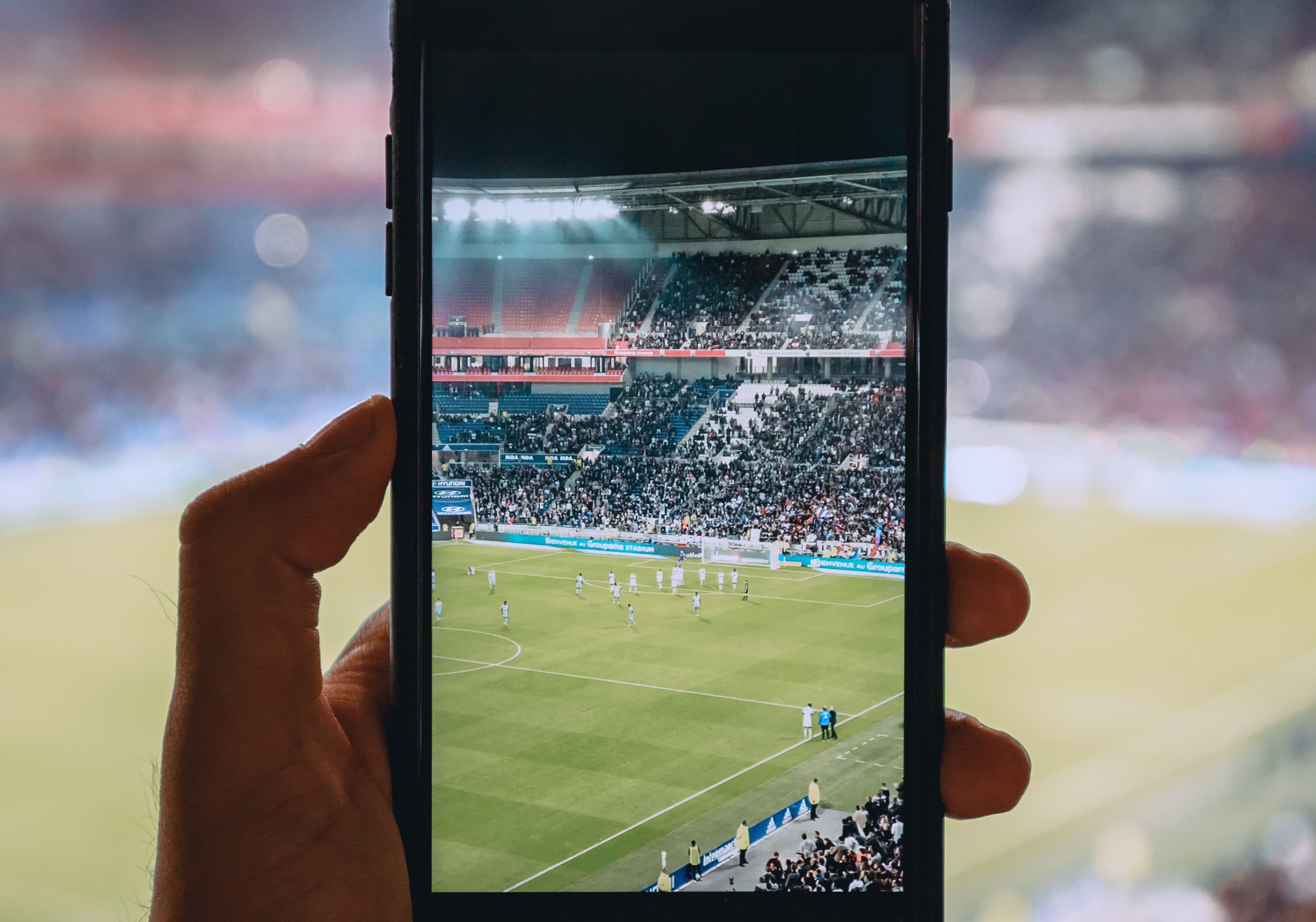 Live sports viewing is on the decline, and young consumers are to blame. Are they abandoning sports, or is there more to the story? These three charts show what’s really going on…

Last month, eMarketer reported that live-streaming is taking time from live TV viewing. The Interactive Advertising Board found that almost half of those who view live-stream content say they watch more now than last year, and 44% say they’re viewing less live TV because of it. There’s no question that the Post-TV Gen is going beyond traditional TV. While that doesn’t mean live viewing is dead yet, it’s certainly changing—and traditional segments like sports are trying to keep up.

But how much have young consumers changed the sports viewing landscape already? In our recent survey on sports and athletics, we looked at the ways that Gen Z and Millennials are watching their favorite leagues and teams, and found that live TV sports viewing is on the decline: 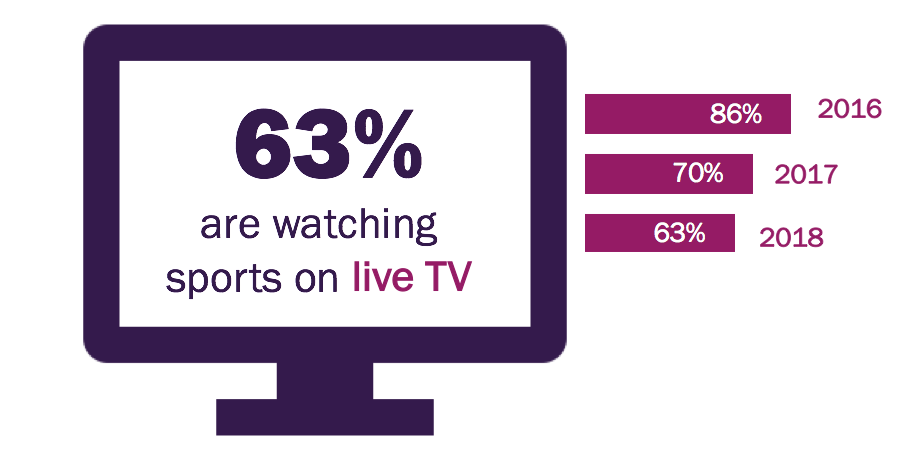 While 63% of 13-36-year-olds report watching the leagues/sports that they follow on live TV, that’s a decline from 86% who said the same in 2016. We’ve seen the decline across ages and among both males and females. So what’s the real story? If these young consumers aren’t waitching sports on live TV, are they abandoning sports viewing altogether? Luckily, we have the real story. When we look at sports viewing across all of the platforms that they’re using to watch, there are a few clear patterns: 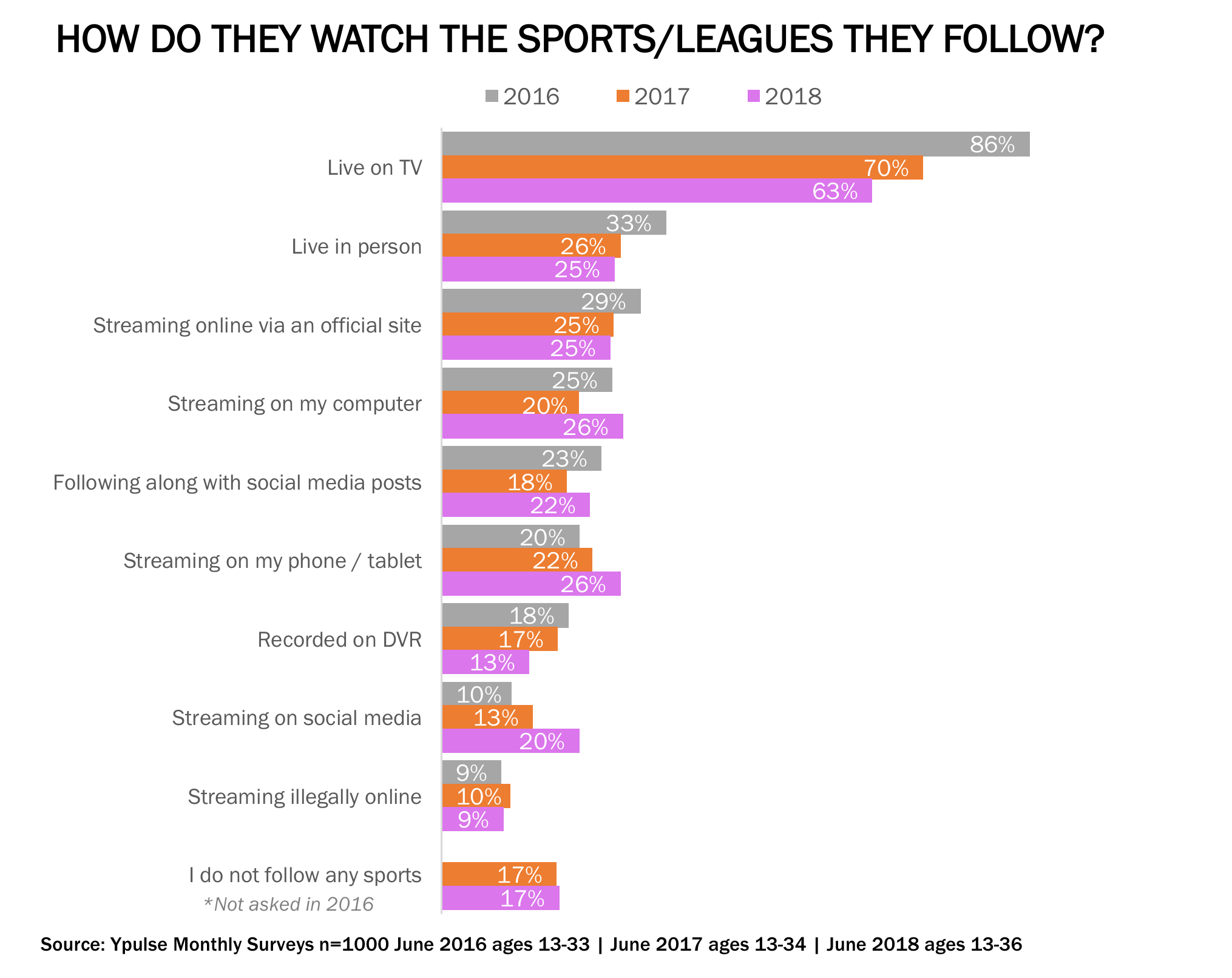 While live TV viewing has decreased over the last few years, streaming has clearly increased. Especially streaming on social media, and via their phones and tablets. We’ll look at just those categories: 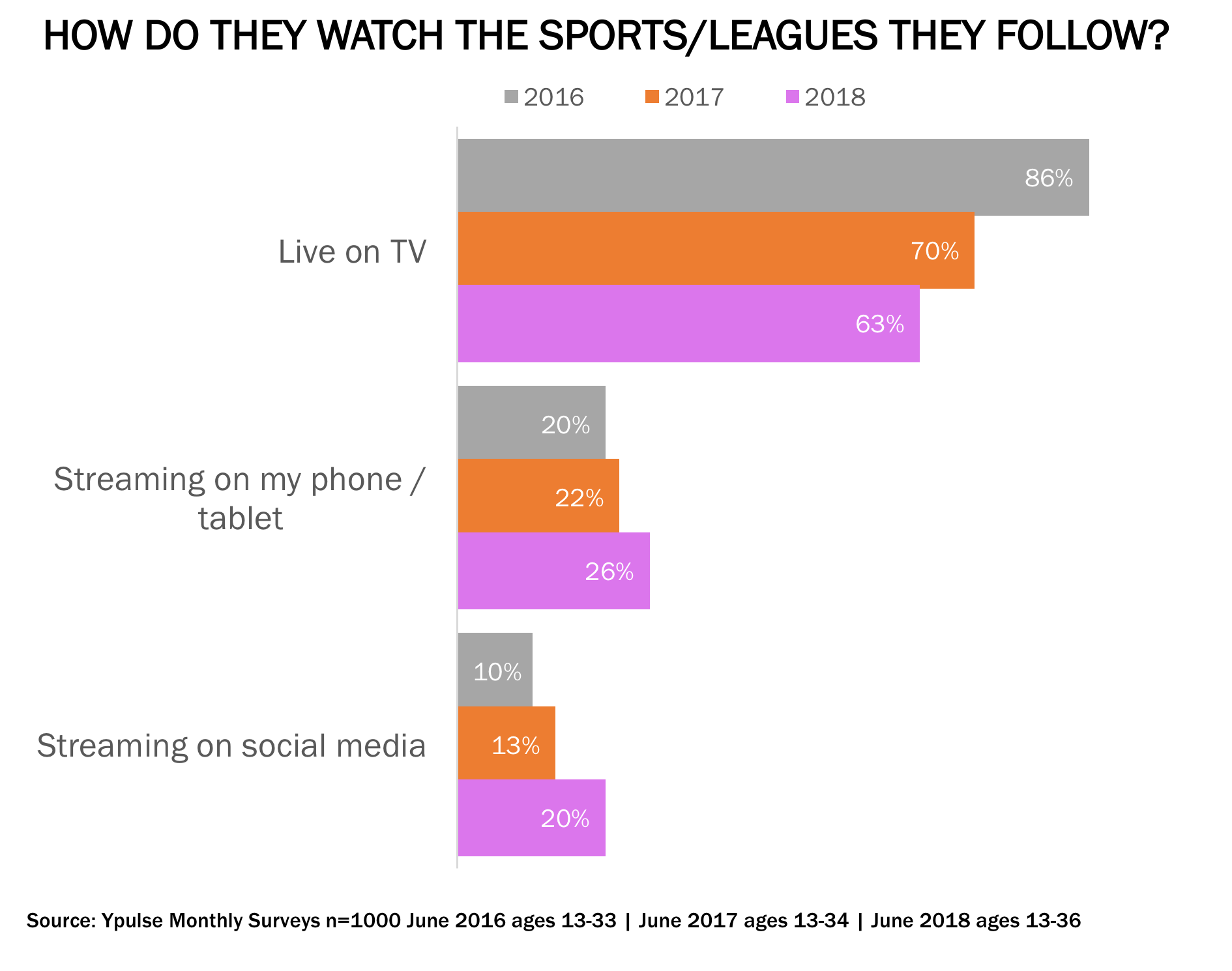 Streaming sports on phones and tablets has increased from 20% in 2016 to 26% in 2018, and social media streaming has increased from 10% in 2016 to 20% today. Networks like ESPN have not been blind to the changes. Viewership for Monday Night Football declined 6% season over season and experts predict the drop will reach 14% from 2010 to the end of this year. But in 2017, when the network added out-of-home and streaming to measurement metrics for traditional TV, they saw ratings jump as much as 33% for young consumers. Overall, Nielsen found that total day viewing for 18-34-year-olds rose 23%, and 28% for prime-time telecasts.

We’ve been watching the efforts to catch up with Gen Z and Millennials sports viewing habits grow. Last year we told you that some of the biggest shakeups in streaming involved sports, with major leagues experimenting heavily with streaming content online and on social media, and major networks developing their own streaming platforms. CBS Sports HQ launched in February of this year, hoping to fill a gap in the streaming space with a “24/7 live streaming channel”—though they’re currently streaming sports news, not live games. They beat ESPN to the punch, but ESPN+ followed in April—though it doesn’t offer streaming of NFL or NBA games. Variety reports that revenue is rising from ESPN Demands and ESPN+ as more young consumers seek live programming in a direct-to-consumer model.

But individual OTT offerings from individual networks might not be the full answer. We see sports streaming increases even more dramatically when we look at young male consumers in particular (who are still more likely than females to say they follow at least some sports leagues), particularly in one area: 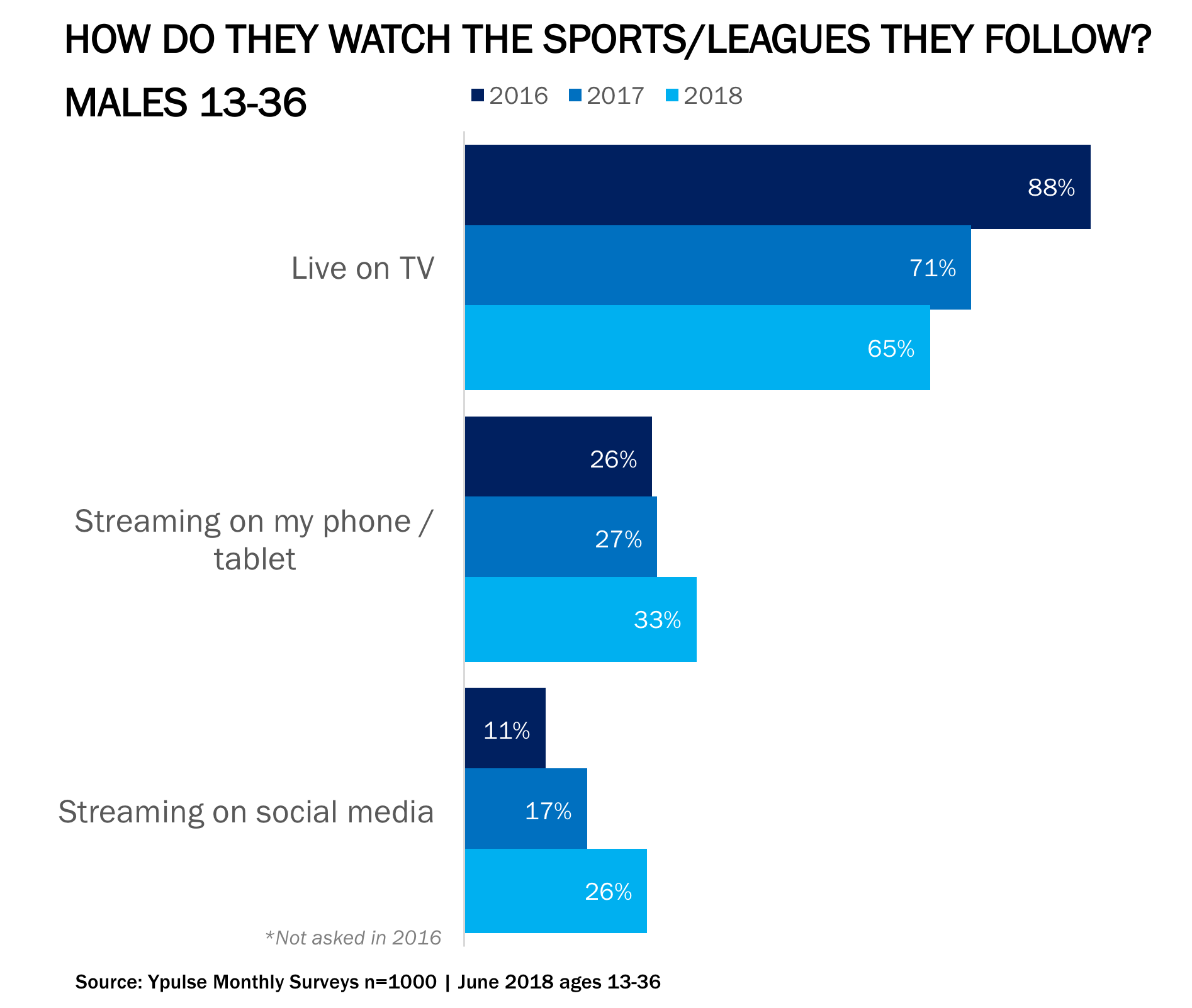 While the increase of sports streaming on phones and tablets has increased some for males, it’s clear here that it’s the streaming of sports on social media that has really picked up steam. While networks are right to set up their own streaming services, or work with already existing streaming services like Netflix, Hulu, and Amazon, sports leagues should be aware that streaming on social media is becoming a key way to reach a vital demographic, who are leaving live TV steadily as time goes by.