What TV news shows do Millennials trust more than the White House? We’re looking at the news sources they believe in, in the fake news era…

Millennials are a generation that has made non-traditional news sources a norm, but now they’re navigating a world of fake news—so who do they trust?

In our recent monthly survey on news consumption and trust, we found out exactly what these young consumers think about fake news: 74% of 18-36-year-olds say that it is one of the biggest problems in society today. They also feel surrounded by it. While social media is by far their biggest source of news, 72% think social media is full of fake news, and 83% say social media companies have a responsibility to stop the spread of inaccurate or misleading stories.

Those social media sources are starting to make efforts to curb the problem. AdAge reports that Facebook is fighting fake news by ranking publishers by their trustworthiness. Following their announcement to tweak the newsfeed algorithm to favor family and friends’ content over publishers’ and brands’, Mark Zuckerberg has announced the powerful platform will be asking users to rank publications’ trustworthiness to prioritize certain publications in the newsfeed over others. YouTube is fighting fake news with a $25 million pledge for trusted news organizations, and pairing searches for news and videos about conspiracy theorist’s favorite topics (think: the moon landing) with text boxes linking out to trusted coverage.

But for the time being, fake news remains a plague on social media—and beyond. Plenty of traditional news sources have been accused of helping to spread fake stories and misinformation. PBS Newshour Student Reporting Labs found that declining trust in major news sources paired with the rapid spread of misinformation on social media feeds is “weakening trust between the media and the audience.” But when we asked Millennials, “In general, how confident are you that your news sources give you accurate information,” 43% said somewhat confident, and 42% said very/extremely confident. Though they see fake news as a huge problem, they still believe that the news sources they’re personally turning to are, for the most part, reporting accurately. So what are their trusted news sources?

We’ll start with looking at the general sources that they tell us they usually/always trust: 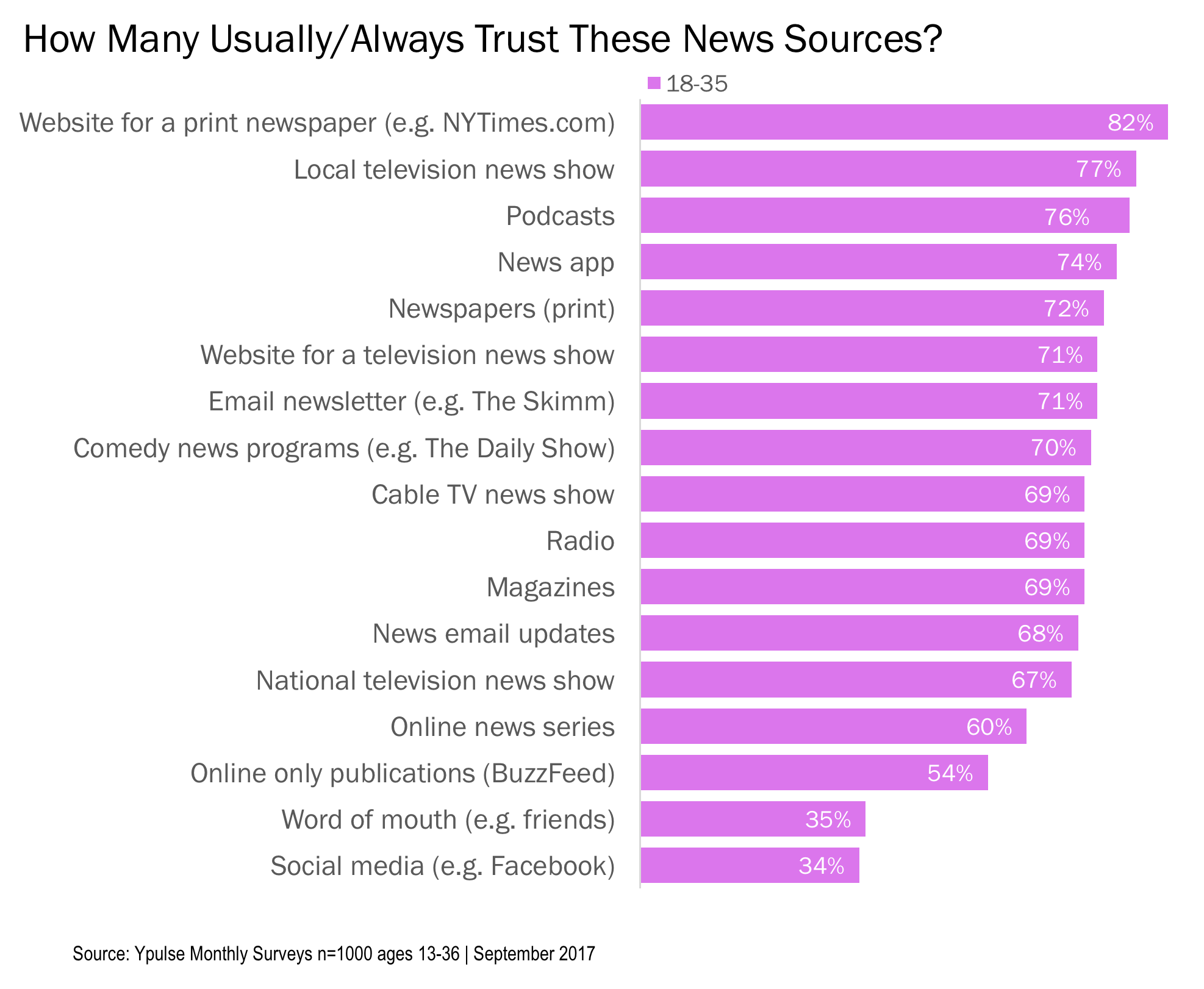 Millennials still believe traditional news sources are trustworthy, in a way. They’re not as likely as older consumers to pick up a print newspaper, but the websites for print newspapers are one of the sources that they trust the most, followed by local television, and podcasts. These more focused sources feel more curated and potentially less sensational than cable and national television news shows, which rank lower on the list. Social media, not surprisingly, is at the bottom of the ranking, along with word-of-mouth.

But what happens when we look at specific TV shows and publications? 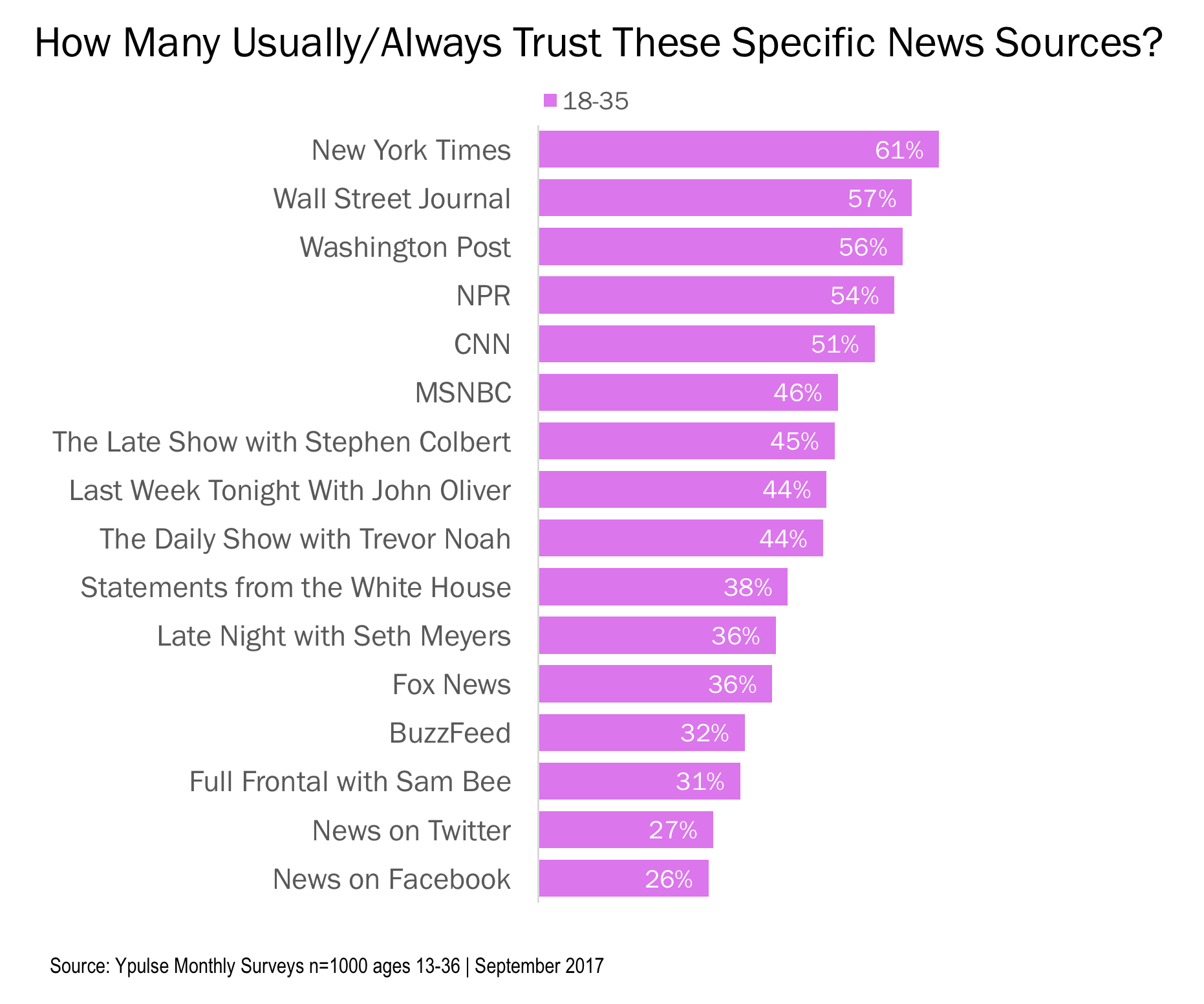 Again, we see that trust in traditional print news ranks high among Millennials, with The New York Times and The Wall Street Journal at the top of this list of specific news sources they usually/always trust.

But here we included statements from the White House to see how they compared to other news sources. The answer? Not well. Millennials are more likely to trust news reported by cable news shows like CNN and MSNBC, as well as comedic and satiric shows like The Late Show With Stephen Colbert and The Daily Show With Trevor Noah than they are to trust statements from the White House. Interestingly, Millennials trust news from Fox even less than the White House, and we saw a similar pattern when we looked at how they feel about the information that specific sources are reporting: 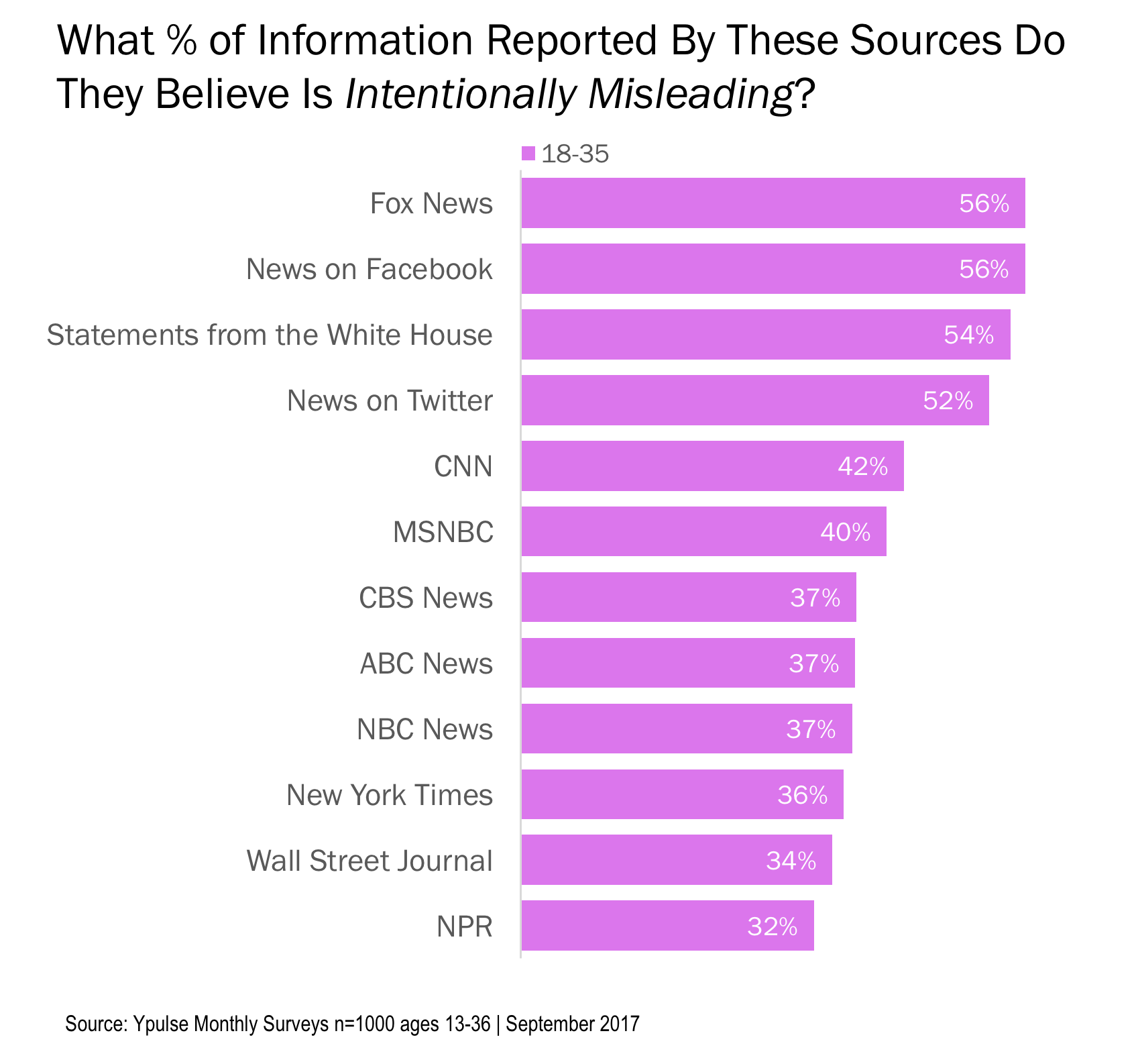 When we asked Millennials to tell us what percentage of the information reported by these sources is intentionally misleading, Fox News ranked among the least trustworthy, with Millennials saying they believe more than half of the news the channel reports is intentionally misleading. Facebook did not fare much better, underlining how much work the social network will have to do to clean up the fake news mess.