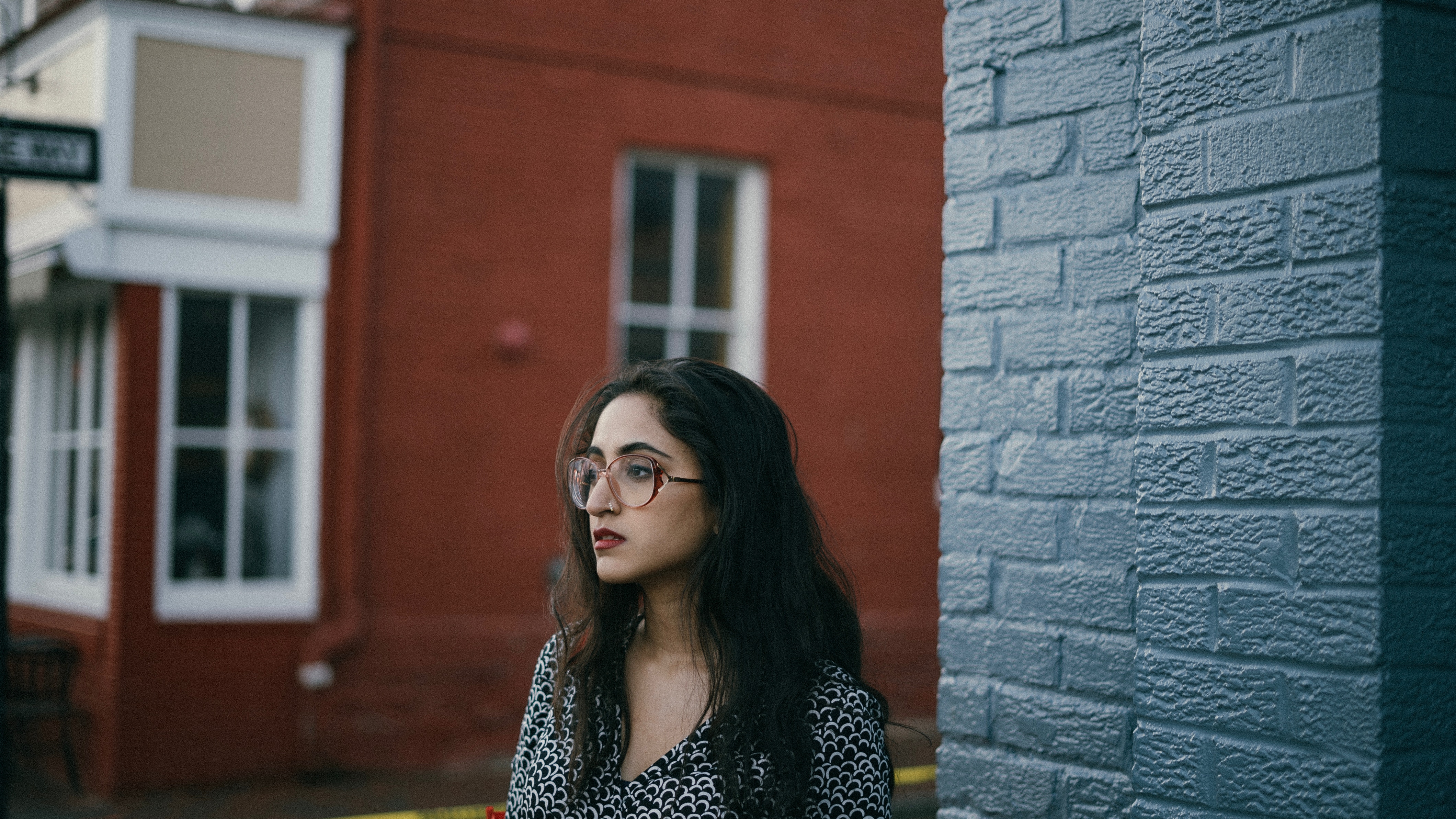 Millennials are notoriously burdened with debt, but what exactly does that debt look like right now? Who carries the biggest burden, and how does it impact their goals? We’re looking at the numbers behind the generation’s debt…

Millennials are notoriously behind in preparing for their financial futures. According reporting by Politico this week, they’re “behind in almost every economic dimension.” The ratio of how much they have invested in assets like 401(k) plans to their income is below Gen X and Boomers and is projected to remain that way—and, of course, their massive student loan debt is partly to blame.

We should note that despite their relative financial trials, they’re still spending. According to a survey from Bankrate.com, Millennials are actually outspending older generations by about $2,300 a year. But that doesn’t mean that debt hasn’t had a significant impact on their lives—and their mindsets. A Harris Poll for the American Institute of CPAs found that 68% of Millennials say debt has a “negative impact” on their daily life, compared to 59% of Xers, and 48% of Boomers. Paying off debt isn’t just a financial burden (and priority) for Millennials, but also a personal and emotional one. More Millennials than any other generation said that their daily lives are disrupted by debt, with symptoms including relationship tension, misleading family and friends about their financial situation, worrying at bedtime, and stressing about everyday financial decisions. A survey by Student Loan Report even found that 69.3% of borrowers say they’d rather get a loan payment than a present for the holidays, and 58% planned on spending money they received over the 2017 holidays to pay back their loans.

As we’ve outlined before, debt is a reality for the majority of them—and though they may be outspending other generations in some industries, it’s clearly a force shaping their life goals and their preferences. When we asked Millennials about their current personal goals and aspirations in our most recent life milestone survey, we found out exactly where debt ranks in their minds: 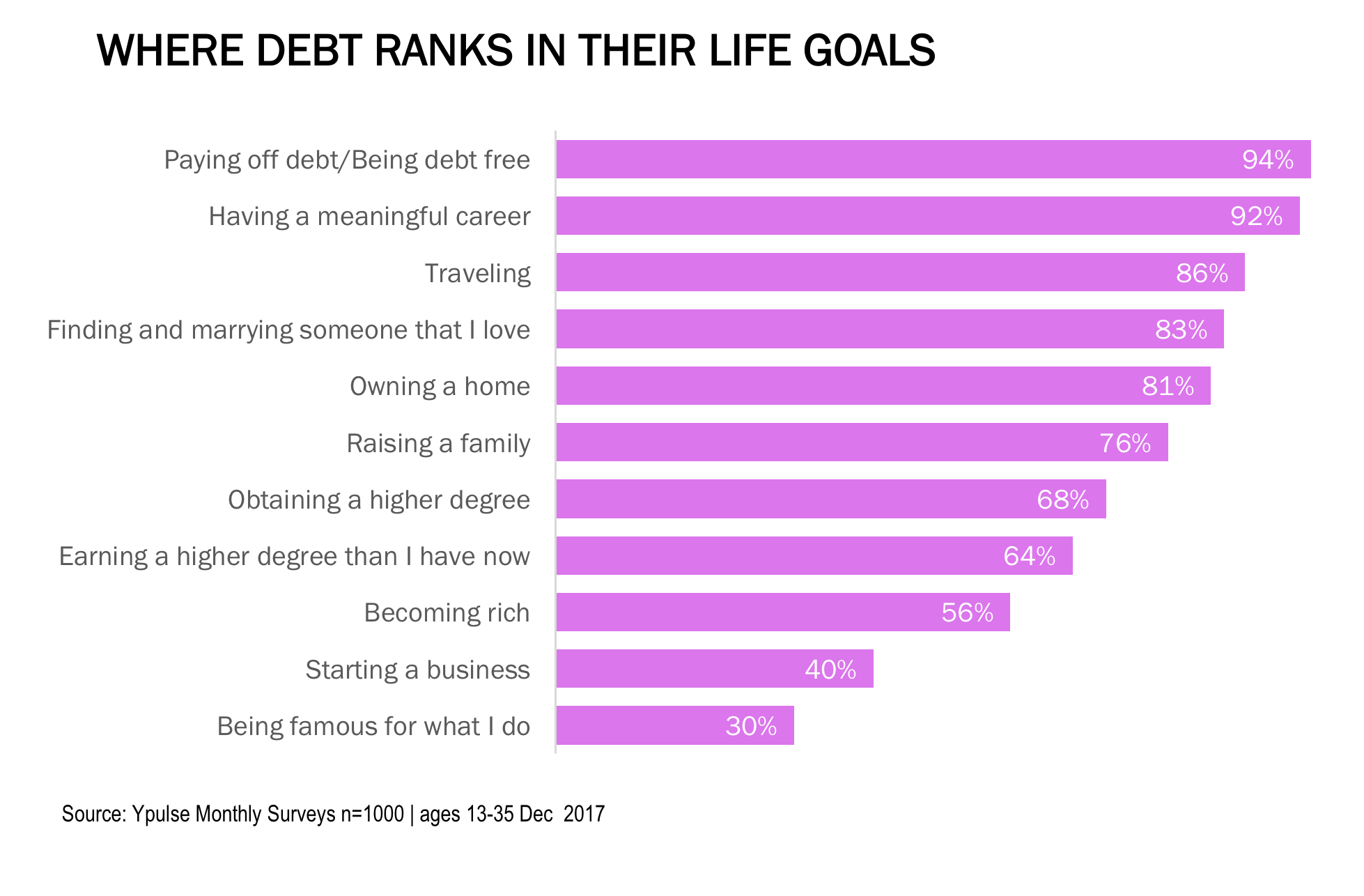 Paying off debt or remaining debt free is the top goal for members of the generation, when compared to some of the biggest life milestones they can achieve, ranking higher than having a meaningful career and traveling (their notorious obsession). Managing their debt, or avoiding it (for those who have managed not to rack up bills), is dominating their current objectives. But how many are actually dealing with the burden of debt? Our most recent financial tracker survey asked them: 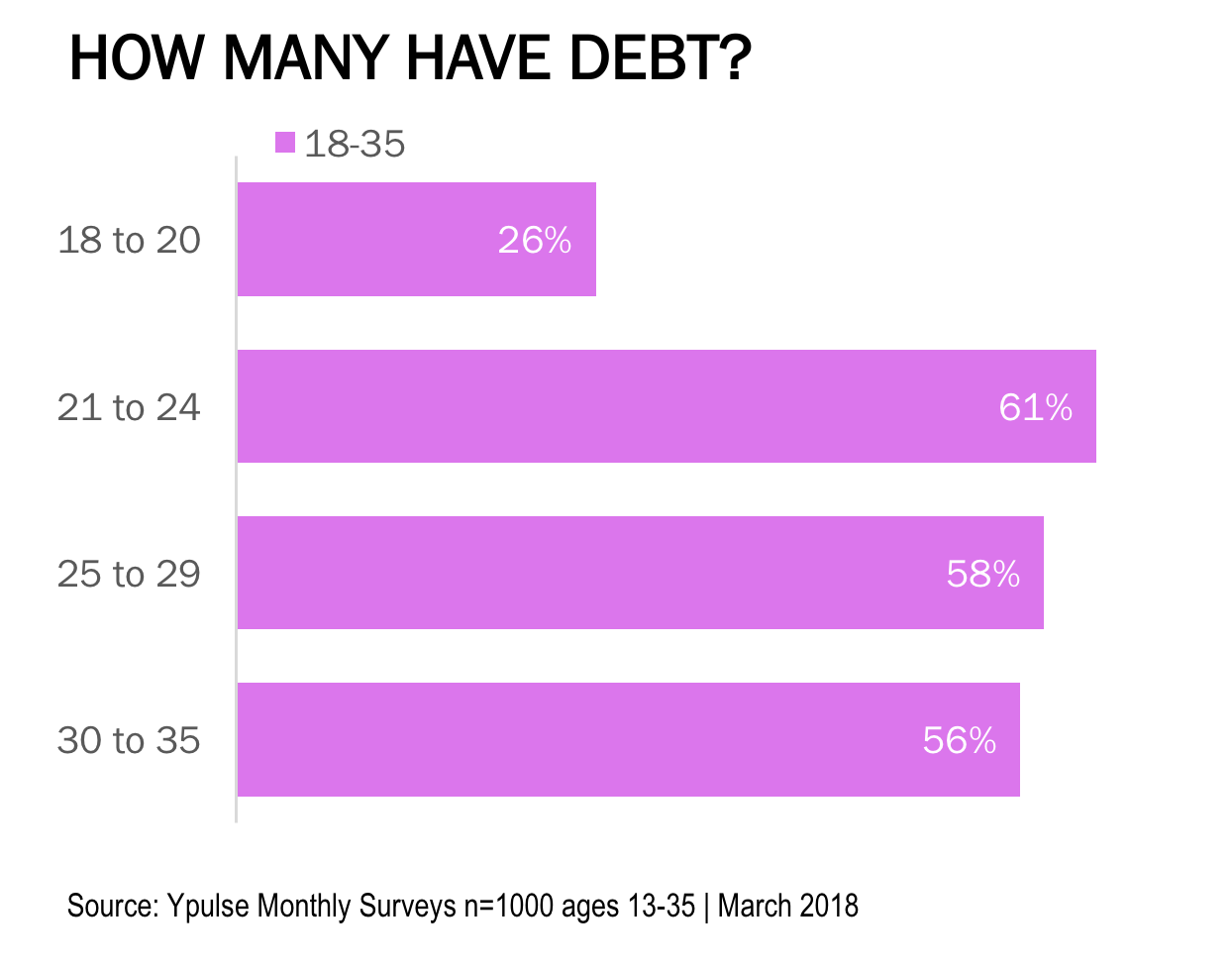 Overall, over half (53%) of 18-35-year-olds say they currently have debt or owe money in some capacity. When we compare different age groups, we can see that 21-24-year-olds are most likely to have debt, followed closely by 25-29-year-olds. Their more recent graduation from college and/or grad school could be behind their relative debt burden. The youngest age group here, 18-20-year-olds, likely hasn’t had as much time to accrue debt, and the oldest, 30-35-year-olds, might be beginning to pay it down.

But we can look at that hypothesis more closely thanks to our personal finance survey, which gives us a more clear idea of exactly what kinds of debt these young consumers have: 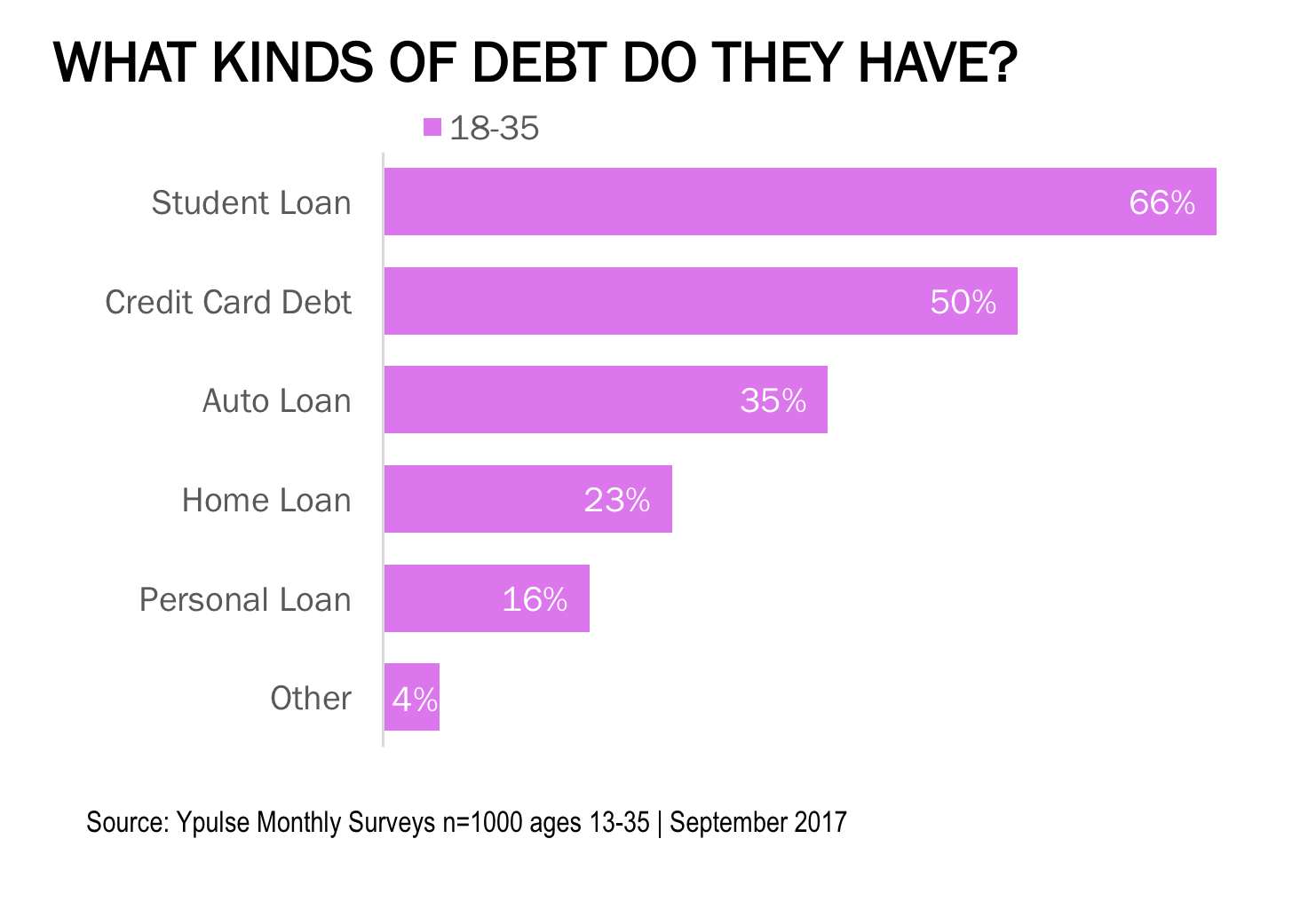 Student loan debt is the most common kind of debt held among 18-35-year-olds who report having debt, with over half of those in debt telling us they have student loans. But credit card debt follows fairly closely, and when we compare age groups, we can see that credit card debt is just as common among older Millennials as stuent loans: 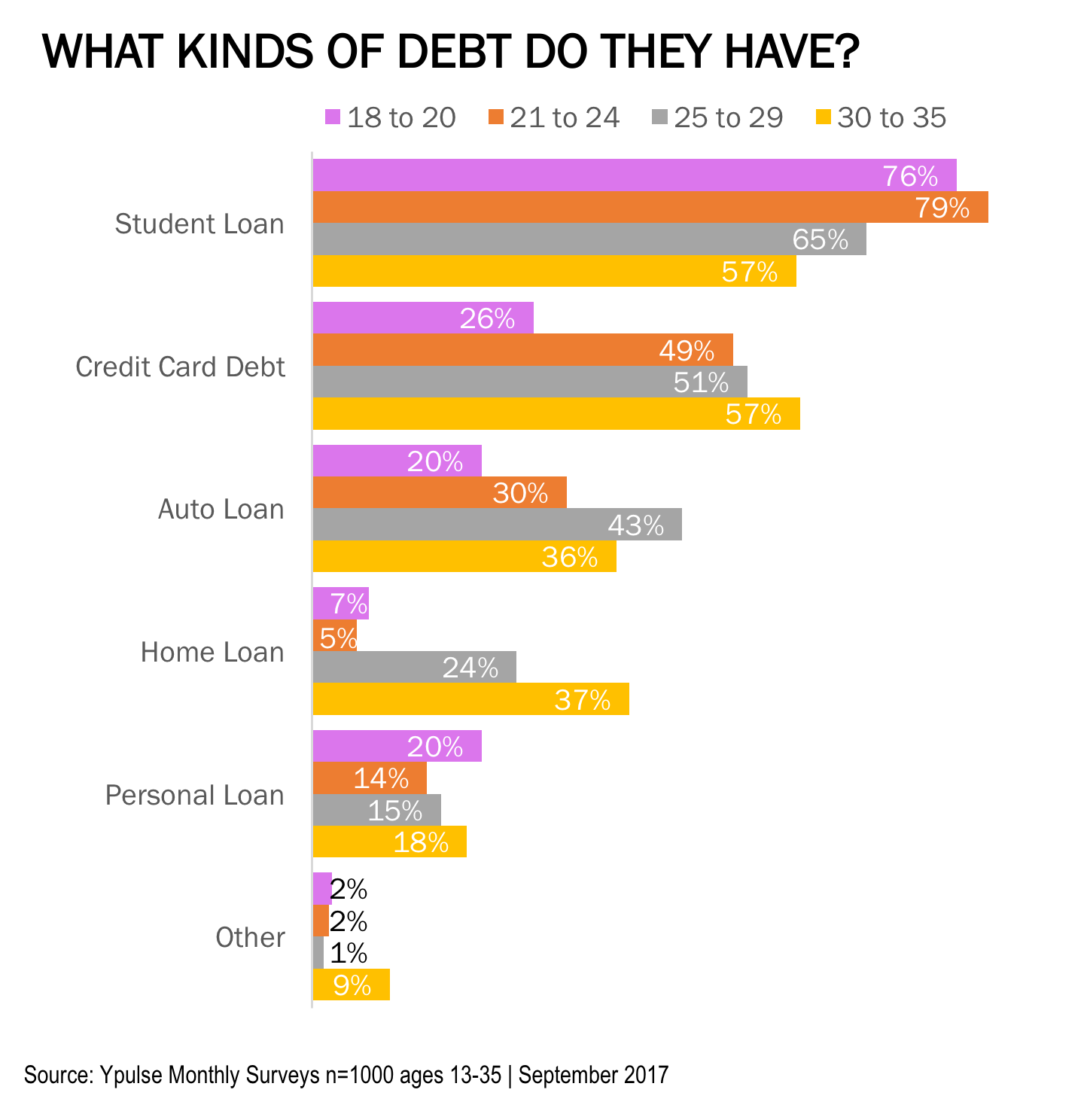 While debt taking up a lot of mindspace for the majority of young consumers, their debt problem goes beyond student loans. Clearly, some of their debt is being accrued by leaping into those adult milestones. But regardless, remembering that paying off their debt, whatever form it may be in, is a top priority for so many is vital.