We don’t have to tell you that favorite athletic brands are way more than the clothes young consumers like to wear to the gym. We’ve been following the rise of athleisure for years, and at this point athleisure and streetwear have taken over as the new couture. With leggings and hoodies the uniform of a generation, from college kids to celebrities, athletic brands have hit the jackpot—but competition has also increased significantly. Brands like Supreme and Vetements have gained cult followings for their coveted higher-end athleisure wear, rooted in hip hop and skate culture. Classic luxury brands have taken notice, and are “co-opting” everything about streetwear, from designs to drops. Smaller players like Outdoor Voices have embraced Millennials’ minimal moment to break onto the athleisure scene, growing rapidly since launching in 2013—a startling 800% in 2016 alone. To keep up, everyone seems to be in a race to release new athleisure and streetwear products. Target’s new private label, Original Use, will offer men’s athleisure pieces at a lower price point than luxury competitors. It’s a crowded and cutthroat scene; one that makes favorite athletic brands a coveted title, and the contest for “most cool” a serious one.

In this athleisure gold rush, it’s no surprise that major athletic brands are under major scrutiny. Just last month, headlines about Under Armour supposedly losing their cool-cred among young consumers began circulating. Business Insider announced, “Angry shareholders rail against Under Armour for being uncool,” while others declared “Under Armour Still Isn’t Cool,” based on claims that young consumers, teens in particular, are beginning to abandon the brand. But YPulse keeps close tabs on favorite brands, and by looking at the athletic wear players, we’ve uncovered a very different story.

In YPulse’s new youth brand tracker survey, we’ve asked more than 27,000 13-36-year-old consumers about their relationships with, and perceptions of, over 200 brands so far this year. With buzz about the “uncoolness” of certain athletic brands ringing loudly, we decided to look at the data and see what young consumers really think about Under Armour, Nike, Adidas, and their top competitors. Here’s what we found out about Gen Z and Millennials’ preferred athletic brands when we looked at awareness, loyalty, and favorite brand Yscores*:

We aren’t surprised that Nike took the top spot in this head-to-head. We’ve continued to see it qualitatively named as a favorite clothing brand among young consumers, even coming in as the top brand young males say understand them best. But while Nike is number one in the athletic brand ranking, Under Armour is holding firmly as the number three athletic apparel brand among 13-36-year-olds, a.k.a. Gen Z and Millennials. We saw similar results when looking at the ranking of logos that Millennials actually want to wear—which Nike at number one and put Under Armour in the top five.

But what about those rumors of uncoolness, which kicked up controversy at Under Armour’s recent shareholder meeting? As part of the “Brand Personality” metric, we ask respondents that very question, and can compare athletic brands’ relative coolness by age group: 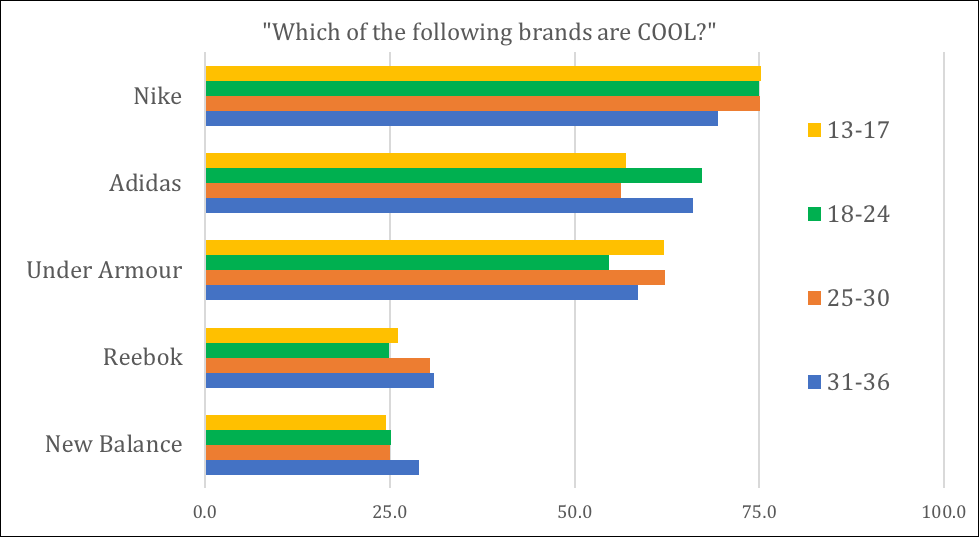 As favorite athletic brand it makes sense that Nike ranks highest in coolness as well, with 75% of our three youngest age groups saying that Nike is indeed a cool brand. We can also see that Under Armour isn’t far behind its competitors on the coolness scale—and is even cooler than Adidas among teens 13-17-years-old and older Millennials 25-30-years-old.

Interestingly, by looking at Under Armour’s score compared to other brands outside the athletic clothing market, it’s level of coolness becomes more clear:

Under Armour is on par with Netflix and Apple in terms of what brands are cool today among young consumers—both Gen Z and Millennials. Among both groups, it’s even more likely to be considered cool than Supreme, which has gained notoriety for being a cool kid favorite.

The competition in the athleisure/streetwear industry is only likely to intensify, so we can expect new players to earn more of young consumers’ attention and spend while current top brands fight to stay relevant. But right now, Nike, Adidas, and, yes, Under Armour, still rule the game as the top athletic brands among young consumers.