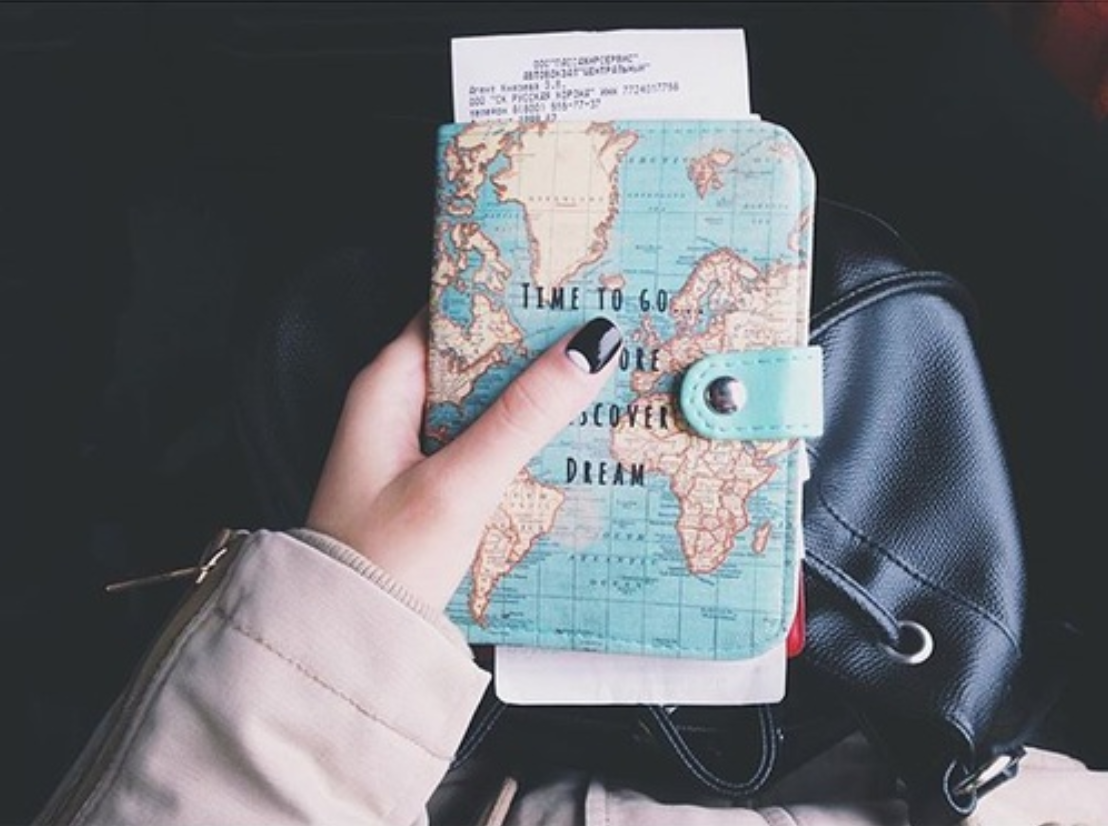 Millennials and Gen Z are enthusiastic travelers, but they won’t just take any old trip. What types of vacations are they most interested in? We asked 13-35-year-olds how they want to travel now…

We’ve taken to calling Millennials and Gen Z the wanderlust generations for a reason. The majority of 13-35-year-olds are very to extremely interested in taking trips and traveling to different destinations, mostly because it allows them to take a break from everyday life, experience different cultures and foods, and do exciting or extreme activities. But it’s not just their enthusiasm that makes these generations important for the travel industry to reach—it’s also their sheer size. By 2025, 13-35-year-olds will account for 75% of all consumers and travellers, according to a global study conducted by Airbnb and GfK1, and they are willing to forgo more typical adult purchases like cars and homes in order to check things off their bucket lists. And with the average Millennial traveling 35 days per year, according to Rezdy, and Gen Z traveling about 29 days per year, according to Expedia, that’s a lot of cash flowing into the industry.

The caveat is—young consumers aren’t just taking any old trip. Millennials and Gen Z are particular about the kind of travel they’re interested in. According to the Airbnb study, 80% of young consumers are seeking “a unique travel experience” by “living like a local.” As one exec put it: “The majority of respondents want to stay in accommodations in trendy, local neighbourhoods, rather than close to top tourist attractions; they prefer active vacations, full of exploration; they don’t mind traveling by themselves; and they prefer to create their own itinerary, rather than leaving it up to a packaged tour.” At the same time, young consumers are the most stressed out and anxious generation to date, and the majority of 13-35-year-olds tell Ypulse that the main goal of their travel pursuits is to relax. So do they want to go skydiving, or do they want to read a book by the pool? Well, both—and more. In our recent survey on travel, we asked 13-35-year-olds to rank the trips they’re most interested in taking. Here’s what they had to say: 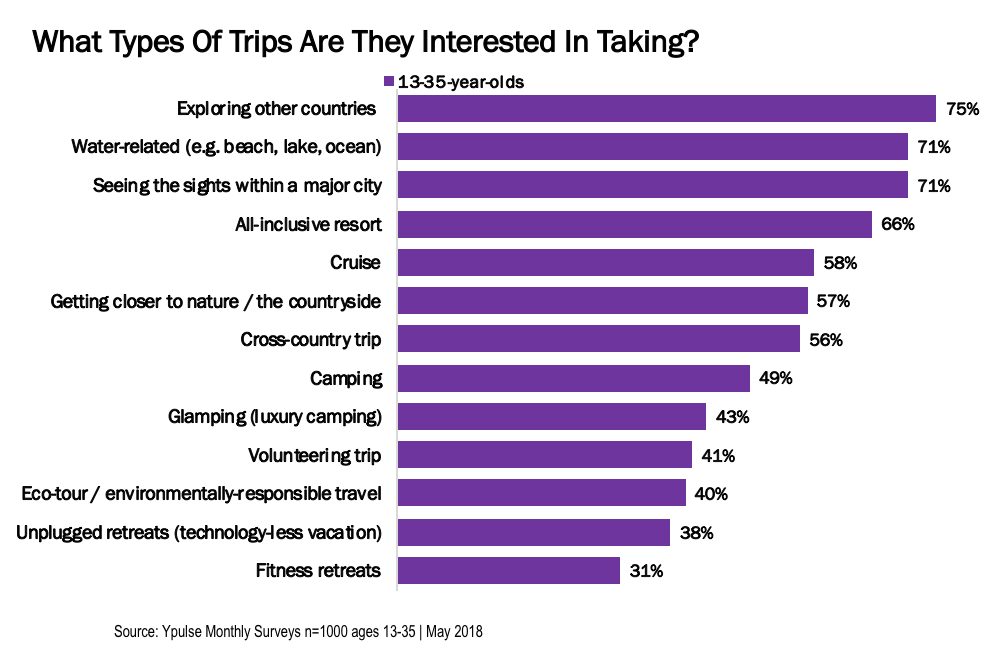 As a whole, young consumers are most interested in exploring other countries, with two-thirds of 13-35-year-olds saying they are very or extremely interested in the pursuit. This type of trip has topped Millennials’ list for the past few years, and accordingly, the number of valid passports in the U.S. has grown 87% in the last 10 years, according to the U.S. State department. We also found that 62% of Millennials have a valid passport. But as Millennials age up and their incomes grow, the generation is increasingly looking to take more relaxing vacations. Interest in all-inclusive resorts, cruises, and glamping shot up as much as 10% since last year. This year we also added unplugged and fitness retreats, and while those types of trips landed at the bottom of the list, there is a growing interest in them among the fitness-loving, digitally overloaded generation, for whom unplugging is a luxury.

When we separate out the types of trips Gen Z is interested in compared to Millennials, however, we see some clear differences: 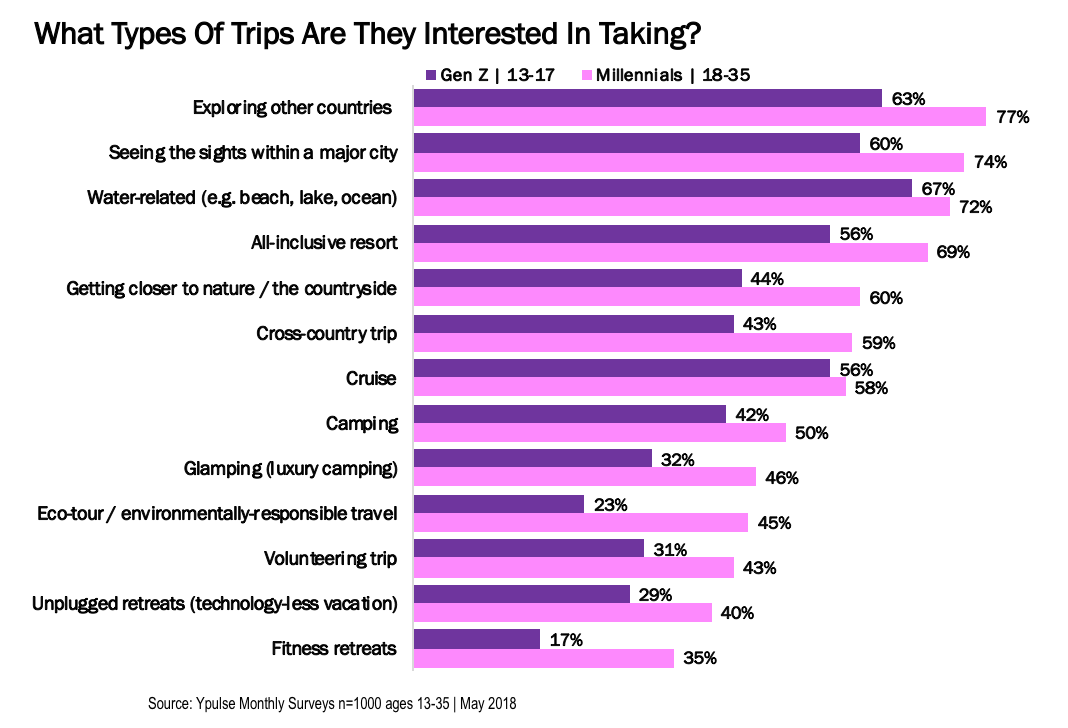 Gen Z is less likely to say they are interested in travel compared to their Millennial counterparts, with 13% of 13-17-year-olds telling Ypulse they have no interest (compared to just 5% of Millennials). That said, the generation is showing signs of increased interest and is mirroring Millennials 10 years ago, according to Skift—they’re interested in international travel and beach vacations, but want to do it on the cheap. That means as the generation ages up, we could see their interest level in other types of travel—and their spending on it—continue to increase.