3 Graphs That Show Snapchat Is Rebounding With Millennials & Gen Z 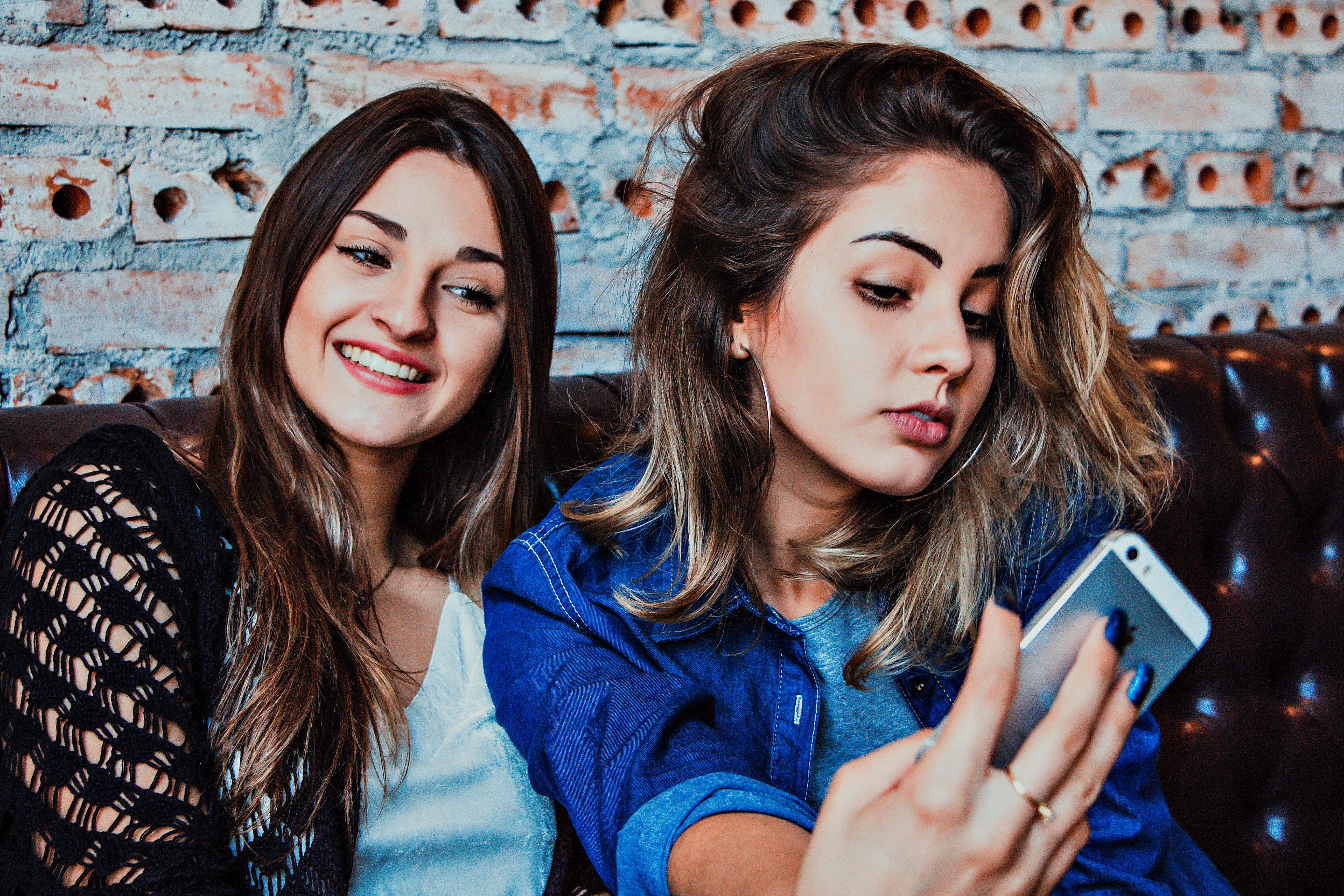 It has been a rough couple of months for Snapchat since it rolled out its wildly unpopular update early in 2018. Although most social network updates experience some backlash, the revolt against Snapchat set new precedents: According to LikeFolio, almost 80% of tweets about Snapchat were negative immediately following the redesign, and a petition to go back to the original on Change.org surpassed one million signatures. Despite the outcry, Snap Inc. decided to hold their ground, with CEO Evan Spiegel stating, “It’ll take time for people to adjust.”

And while the company is currently rolling out a redesign for its redesign, the damage has already been done. The not-so-hot take on Snapchat is that it’s only matter of time before it goes the way of Friendster, MySpace, and Google Plus. The media loves to declare things dead (and usually blames Millennials for killing them), but it might not be over just yet for the once-teen-beloved app. Ypulse’s youth brand tracker tells a different, more nuanced story about the social media giant.

*Yscore is calculated based on responses to the following prompt: “Please tell us how well you know each of the following brands.” On a six-point scale, respondents rate their relationship with one brand at a time; responses are then weighted and rebased to 100. 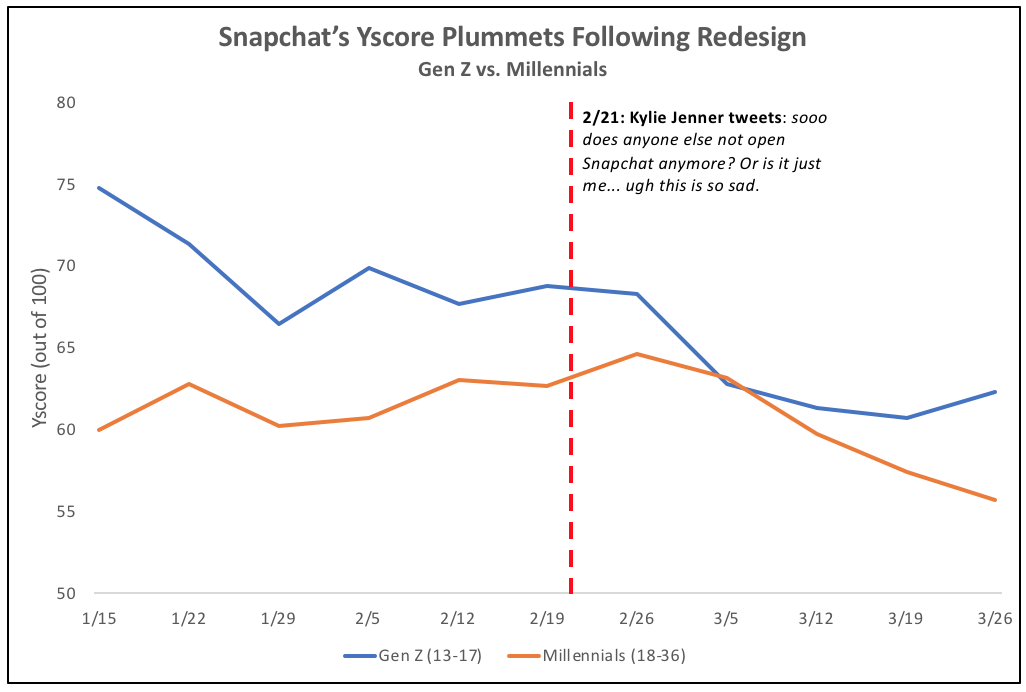 Snapchat’s Yscore (a measurement that gauges young consumers’ relationship with the brand) declined after the redesign—and specifically after top teen celebrity Kylie Jenner tweeted her displeasure to her loyal followers—and continued to dip through the end of March.

Millennials and Gen Z both saw a sharp decline in the weeks following Snapchat’s redesign, but we can see that both have started to level out. Teens appear to be more apt to forgive Snapchat than Millennials, judging from the slight uptick in brand sentiment towards the end of March. We can break it down into even more specific demographic groups to see which age groups have had the rockiest relationship with the social media giant: 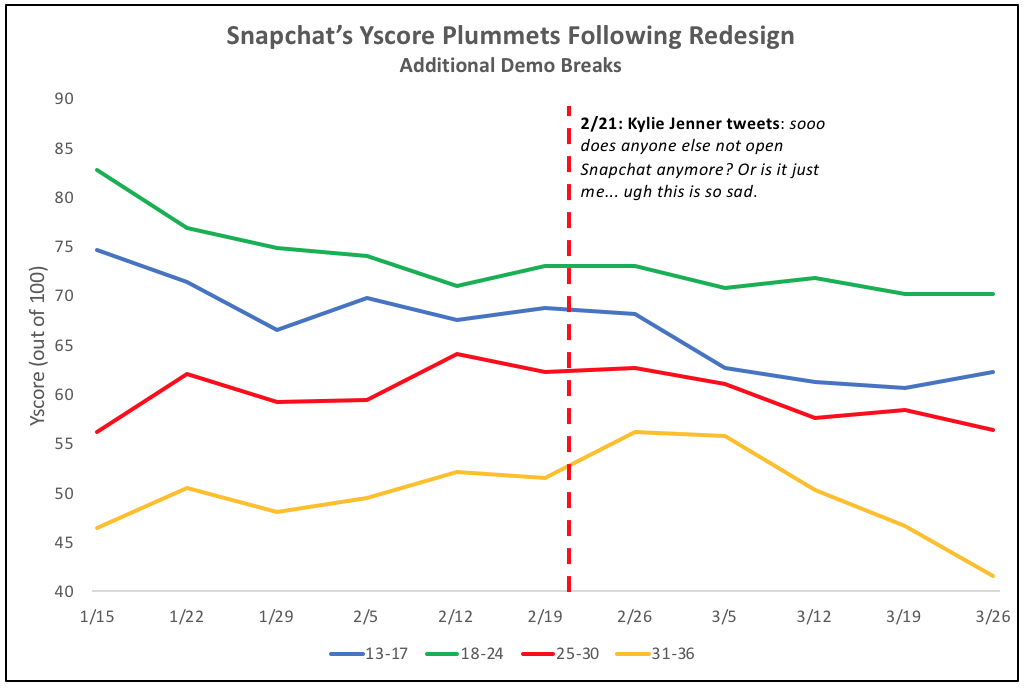 Breaking it down by demo, 18-24-year-olds had the strongest relationship with Snapchat as of mid-January, right around the time of the redesign, with a Yscore of 82.9 out of 100. But since then, that score has declined sharply, reaching a low of 66 in April.

Meanwhile, 13-17-year-olds were feeling almost as good about Snapchat as 18-24-year-olds in mid-January with a Yscore of 74.8. But by the end of April, Snapchat’s Yscore among teens had plummeted to 58.7.

The 25-36-year-old demo actually saw a rise in Yscore on Snapchat from 49.8 in mid-January to 59.5 at the end of February. It’s possible that the press surrounding Snapchat worked to their favor temporarily. But not all press is good press. As older Millennials caught on to their younger counterparts’ distaste for the redesign around the end of March, 25-36-year-olds’ Yscore fell to 47.1.

But those who are ready to bury the Snapchat app alongside its Spectacles should take pause: According to Ybrands’ most recent data, Snap’s story isn’t over yet. Since Snapchat’s nadir during the last week of March, their score has slowly begun to bounce back. This is not to say Snap Inc. has dug itself out of its hole just yet. But it’s a start. 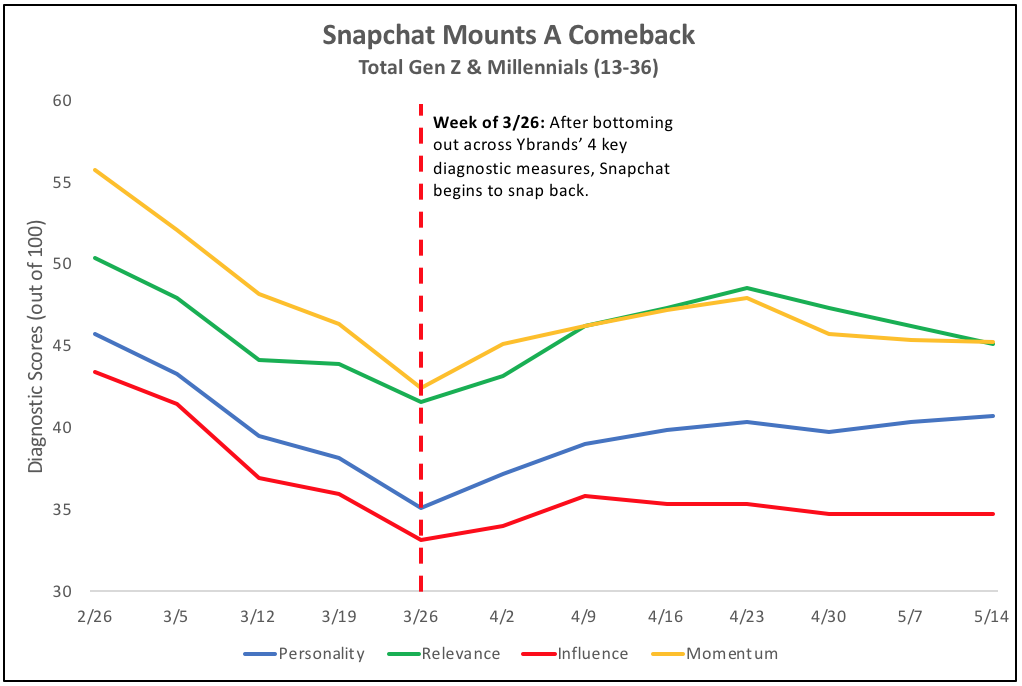 As long as Snapchat doesn’t do anything to win back the scorn of its users, the app stands a chance at (slowly) rebounding with young consumers—who have proven time and again that they’re quick to forgive and fickle with their brand bans.