Why Teens Can’t Get Enough of Slime (& Other ASMR Trends)

Oddly satisfying slime videos continue to capture teens’ coveted attention, so we asked Karina Garcia AKA “Slime Queen” all about the sticky substance’s lasting appeal, how brands can authentically tap into the trend, and more…

Millennials & Gen Z teens are relaxing with ASMR videos—short for autonomous sensory meridian response—and we’ve been tracking the trend’s rise. Watching or listening to these oddly satisfying snippets is just one way mental self-care needs are being met digitally (meditation apps and Zen mobile games like “Travel Frog” are on that growing list, too). Most recently, soap-cutting (which is exactly what it sounds like it is) and sleep-inducing whisper videos (dubbed “whisper porn”) are making headlines. Oh, and we can’t forget IKEA’s surprisingly on-brand 25-minute ads of one woman’s seemingly menial moments—like running her hands over cotton sheets or flattening cushions just to see them rise slowly back up.

But the one that arguably started it all is…slime! The “tween-dominated” market of homemade slime has accumulated millions of #slime Instagram posts and YouTube tutorials. The demand for DIY slime grew so fast that stores were struggling to keep glue (the number one ingredient) on shelves last year. Elmer’s Glue was forced to “step up” production, but made no attempt to slow demand; instead, the brand embraced the movement, posting their own how-to videos, and assembling a team that tracks the trend and creates recipes. Cra-Z-Art and Nickelodeon were also quick to embrace the trend, teaming up to market and distribute branded slime kits that include everything needed to make Nickelodeon’s iconic, nostalgia-inducing green goo, “as well as a variety of colors and textures including glitter, neon, and glow in the dark.”

Suppliers have caught up with demand and marketers have made the most of the trend, but the demand for slime videos, recipes, and more continues. We know one reason why: teens are seeking escape from their everyday anxiety. Ypulse data shows that 82% of teens have participated in at least one trending activity to relax, and 16% have played with slime or watched slime videos. So we decided to catch up with Karina Garcia to see just what it is about slime that has Gen Z’s attention, how she became one of the five most-followed DIYers with over 6 million YouTube subscribers, her thoughts on how brands can (and should) get involved with trends like this one, and what she thinks the future holds for the ooey, gooey, oddly satisfying substance:

Ypulse: Can you tell us how and why you started making slime?

Karina Garcia: I found the recipe on Pinterest in September of 2015. It was pretty basic, and I thought it would be cool to add stuff to it with more texture. My slime started to get bigger and bigger from there!

YP: Can you talk about what platforms are most important for you, and why you use them?

KG: I focus on YouTube the most; I have the biggest following there and love being able to create and share with people.

YP: When did you see slime start to take off as a trend, and why do you think young consumers like to watch the videos?

KG: I feel like slime really started gaining popularity in 2016, and I thought it was going to peak last year but it just seems to keep getting bigger and bigger. I think 2018 will be filled with even more slime. I think people are so obsessed with it because it’s satisfying to make and watch!

YP: Do most consumers just watch the videos or are many making the slime themselves, too?

KG: It depends, some like to just watch it because it’s fun. I do think a lot of kids also watch because they want to be able to make their own slime and [put] their hands in it too!

YP: Can you tell us about your book, Karina Garcia’s DIY Slime?

KG: I came out with a slime book because it was super-requested from my fans! The book has a few recipes that were already on my channel, and then I also included some of my favorites that have never been seen. There are 15 slime recipes in the book and they are all 100% safe to make.

YP: Do you think making and watching slime is a way for young people to relax?

YP: Why do you think young people today need that stress relief?

KG: Kids are so busy these days, and I think slime gives them the stress relief needed to just slow things down for a moment.

YP: How do you decide whether or not to advertise a brand? And how do you make sure your fans enjoy the content?

KG: It has to make sense for my channel and be genuine. In the past, I’ve had some big offers and turned them down because I didn’t think they were right for my audience.

YP: Do you have any advice for how brands can get authentically involved with trends like this one?

KG: It can be tricky for brands to get involved with trends like this. I think it has to be the right fit for the channel and audience. I would love to work with a brand that has something to do with slime.

KG: When I started making videos on YouTube, I was really shy. Once my channel took off, I started to interact with people more and it helped break me out of my shell. YouTube has helped me in so many different ways to feel more confident. I want to set a good example for my young audience, and I feel like I’m able to be a role model for kids.

YP: What has been the best brand partnership you’ve had? Why?

YP: Do you think the slime trend will continue?

KG: Yes, it will only be getting bigger from here!

YP: What do you have planned next? Where do you see yourself in the next few years?

KG: I just want to see myself continue to be a successful crafter and continue to grow my brand, Craft City. I have many projects coming out that I can’t wait to share! 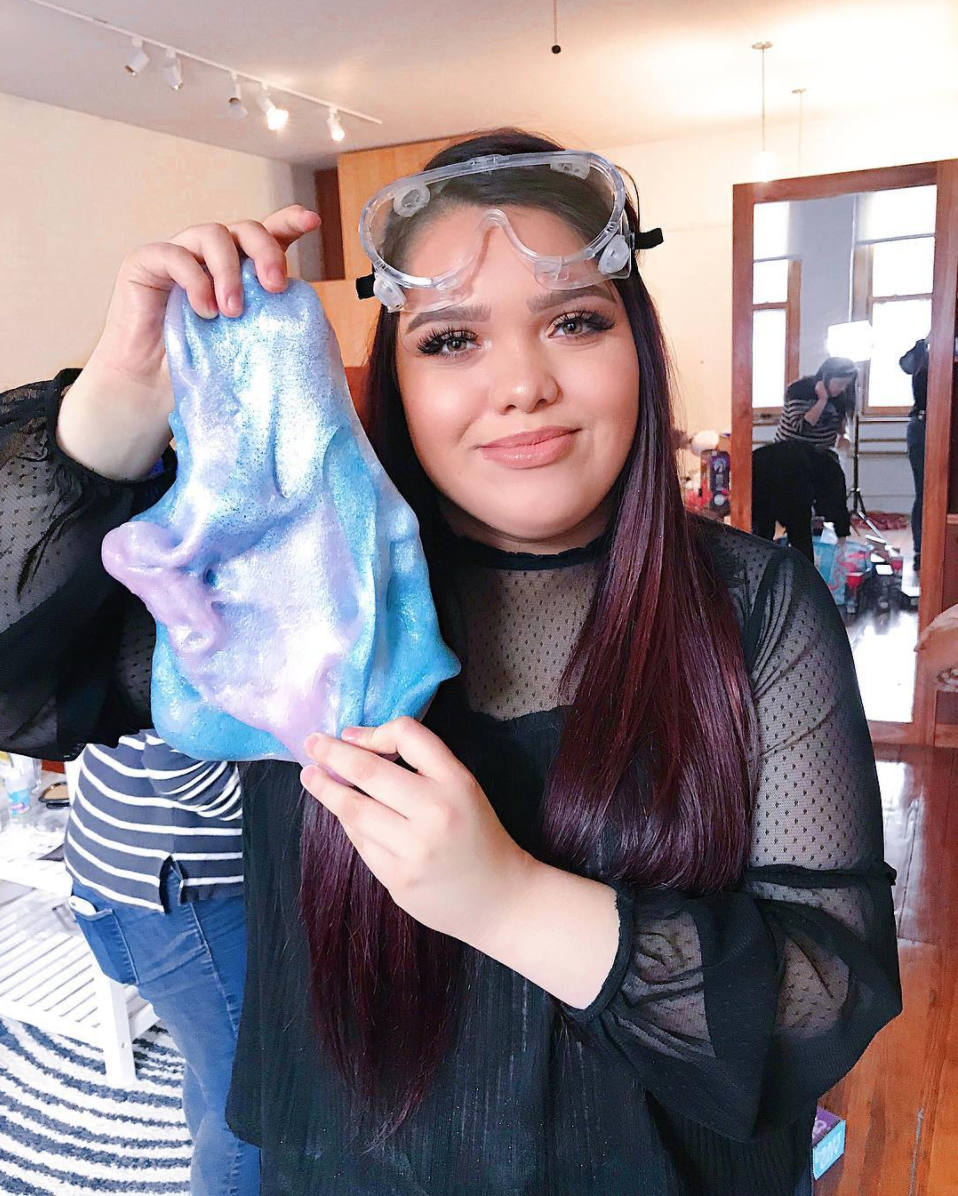 Karina Garcia is a DIY & overall lifestyle expert. With a wildly popular YouTube channel (over 6 million subscribers), one best-selling book published and a second one on the way, a crafting product line (Craft City) on the way, and being one of the top 5 most followed DIYers on the internet—it is safe to say Karina is showing no signs of slowing down!

The New York Times recently crowned Karina the “Slime Queen” and millions of her adoring fans would agree.

After following the advice of her twin sister, Mayra, Karina began her YouTube channel just over two years ago and she has since amassed over 6 million subscribers and 845 million views on her main channel. Karina has always had a larger than life personality and knows what it takes to entertain an audience. Her passion for crafting initially began from family projects with her five siblings and she has now turned that passion into an empire!

Karina is currently wrapping up a 21 city national tour, in which she connected with her adoring fans IRL, conducted a slime making demo, played games, and answered fan questions. Next up, Karina will release her new line of products called Craft City, sold exclusively at Target. The first product in the line will be a DIY slime kit, so fans can finally achieve the same slime that Karina produces in her videos. She also released two books, Karina Garcia’s DIY Slime and Karina Garcia’s Must-Try DIYs.

Beyond teaching the world how to make slime and crazy arts & crafts projects, Karina loves design, style, and keeping up with the latest trends.

North America
Gen Z & Millennials Aren’t Turning to Experts for Wellness Information
Wellness professionals aren’t at the top of their list for wellness information any...
North America
Young People Are Seriously Done With Facebook on The Viral List
TL;DR Facebook is in hot water with already waning young users for supplyi...
North America
Taylor Swift is The Newest Celebrity Private Jet Controversy on The Viral List
TL;DR Taylor Swift has been called out for having the highest emissions of...